As periodontists we currently have many treatment options available.

At present we have the advantage of newer techniques not available in the past, such as dental implants, bone regeneration and augmentation, sinus lifts, etc. Implant treatment is one option that has been quite predictable and fairly successful. These advances allow us to expand our treatment options. However, sometimes these modalities cannot be used for any number of reasons. Therefore, it is important to have other options available when needed. After all, our main objective has been, whenever feasible, to maintain the patient’s natural dentition in a healthy state. This chapter is intended to elaborate on one particular treatment option available to us to obtain this goal of maintaining a healthy periodontium.

Osseous surgery has had a controversial history as a modality of periodontal treatment. Recently, however, it has experienced a renaissance at Boston University Henry M. Goldman School of Dental Medicine. The concept of using a flap to visualize the alveolar bone was not controversial but whether or not to “touch” the bone has been. In 1884, Robicsek described a procedure to allow access to the bone (Stern, Everett, and Robicsek 1965). In the 1920s, Zentler, Zemsky, and Neuman reported that access to the bone was necessary to remove necrotic or infected bone (Zentler 1918; Zemsky 1926). Kronfield (1935) reported that bone was neither necrotic nor infected. Orban (1939) introduced the gingivectomy procedure in 1939. However, recurrence of pockets was frequently observed. Schluger’s (1949) classic article defined the principles of osseous surgery. He outlined the basic principles of osseous resection in periodontal surgery. The goal was to create a form to the bone that resembles an ideal architectural form. The purpose, therefore, was to reestablish physiologic contours to the bone and establish shallow gingival pockets. Lindhe and Nyman published 5-year results in 1,620 teeth in 75 patients who had advanced periodontal disease and were treated with surgical pocket elimination (Lindhe and Nyman 1975). The authors concluded that pocket elimination surgery, along with good oral hygiene, resulted in periodontal health. Becker et al. (1988) published results comparing root planning and scaling, osseous resective surgery, and modified Widman flap. They concluded that 1 year later modified Widman and osseous resective surgery resulted in effective pocket reduction.

Scaling was not as effective in reducing pocket depth. There have also been numerous studies demonstrating that surgical and nonsurgical therapy were both viable treatments. However, studies do show that the deeper the pockets, the poorer the plaque removal (Waerhaug 1978). Waerhaug found that most reliable means of allowing for adequate plaque control was to eliminate the pathological pockets. However, in moderate to deep pockets, if maximum pocket reduction is accepted as the main objective in periodontal therapy, then surgery and not curettage would be the treatment of choice (Knowles et al. 1979, 1980). Another study (Olsen Simmons 1985) compared flap curettage with no osseous therapy and flap surgery with osseous therapy (Olsen, Simmons 1985). Split-mouth random surgery was done. Pocket depth with flap surgery only returned to preoperative levels. The deeper the pocket is preoperatively, the more effective osseous surgery is at reducing and maintaining pocket depth. They demonstrated that if minimal pocket depth is the clinical objective, then osseous resective surgery is the procedure of choice. It would seem reasonable that osseous resective surgery may be the most predictable “pocket” reduction procedure.

Osseous surgery is accomplished with a combination of ostectomy and osteoplasty, as classified by Friedman (1955). Osseous surgery, therefore, is intended for the elimination of osseous defects and elimination of periodontal pockets in order to make the area more amenable to self-maintenance as well as maintenance by the patient. Patients cannot perform adequate oral physiotherapy on teeth surfaces that are adjacent to osseous defects. The walls of the bony defect support the overlying gingiva and hinder attempts to clean the apical portion of the teeth. Osteoplasty is defined as reshaping alveolar bone to achieve a more physiological form without removal of supporting bone. Ostectomy is the excision of bone (American Academy of Periodontology 1992). Both are subtraction procedures. Minor osteoplasty does not remove supporting bone. However, ostectomy does remove supporting bone. Some have criticized the technique of osseous surgery because of the possibility of excessive osseous loss. Selipsky reported an average of 0.6 mm of supporting bone loss (Selipsky 1976). Also, mobility increased markedly after osseous surgery but did gradually return to below presurgical levels at 1 year. He also noted that the reshaping of thickened margins does not reduce any portion of the attachment apparatus. The use of these procedures, therefore, requires sound clinical judgment. All osseous surgery is aimed at allowing the patient to adequately remove plaque, which is essential in preventing periodontal disease. In fact, it is the author’s opinion that surgical treatment should not be discarded in favor of chemotherapeutics when time has shown surgical techniques to be successful for the long term.

Ochsenbein and Bohannan (1964) classified craters. Class 1 comprised craters of 2–3 mm osseous concavity with relatively thick buccal and lingual walls. These were treated with palatal ramping. Class 2 comprised 4–5 mm osseous concavity with a wide orifice and thinner walls. These were treated with buccal and palatal ramping. Class 3 were concavities 6–7 mm and were treated with both palatal and buccal ramping. Class 4 were lesions of variable depth with thin buccal and palatal walls. Therefore, ostectomy is used to treat shallow (1–2 mm) to medium (3–4 mm) intrabony and hemiseptal osseous defects (Goldman and Cohen 1958; Ochsenbein 1969, 1986; Ariaudo and Tirrell 1957). Osteoplasty is generally done to treat buccal and lingual bony ledges, buccal and lingual minimal intrabony lesions, and incipient furcation involvement (Ariaudo and Tirrell 1957; Friedman 1955; Ochsenbein 1958, 1977; Pritchard 1961). The result with osteoplasty, along with an apically positioned flap, allows better tissue adaptation when suturing. The end result of ostectomy is the elimination of the intrabony pocket. An apically positioned buccal flap and a thinned palatal flap are necessary in conjunction with the above (Ochsenbein 1958). Osseous periodontal surgery is a combination of ostectomy and osteoplasty to reestablish osseous contours that resemble normal or physiologic bone. In other words, the interproximal bone is coronal to the buccal and lingual radicular bone (Ochsenbein 1986).

In periodontitis there is resorption of bone with an apical migration of connective tissue and junctional epithelium (Page and Schroeder 1976). This forms a “defect” in the bone adjacent to the root. The surrounding bone that is in a more coronal position forms the walls of the defect (an intrabony defect). If, on the contrary, the alveolar housing is thin, the osseous lesion would be all encompassing. In this case, the gingival margin would be unsupported (Oschenbein 1958; Goldman and Cohen 1958), and dependent upon the thickness of the soft tissue, a suprabony pocket with increased pocket depth would occur or, more often than not, the gingival margin would recede. Normally the connective tissue and epithelial attachments average 2 mm in width and are coronal to or adjacent to osseous margins apically in the base of intrabony defects and coronally over the walls of the defect (Oschenbein 1958; Goldman and Cohen 1958; Gargiulo, Wentz, and Orban 1961). Osseous surgery is done to remove the walls of bone that make up the defect and place the gingival architecture in a more apical position. The removal of supporting bone (ostectomy) and nonsupporting bone (osteoplasty) with the use of an apically positioned flap is osseous resective surgery. The flap’s final position should be at the crest of bone. Therefore, precise placement of the flap at this level necessitates a split-thickness flap on the buccal, and a thinned palatal flap allows precise placement by periosteal suturing. The probing depths and amounts of attached gingiva will determine the initial incision for flap design. If there is an adequate dimension of attached gingiva, the distance of the primary incision from the gingival margin is proportional to the difference in probing depths of the adjacent teeth. The apical positioning of the flap allows the gingival margin to coincide with the osseous crest. See Figure 6.1. 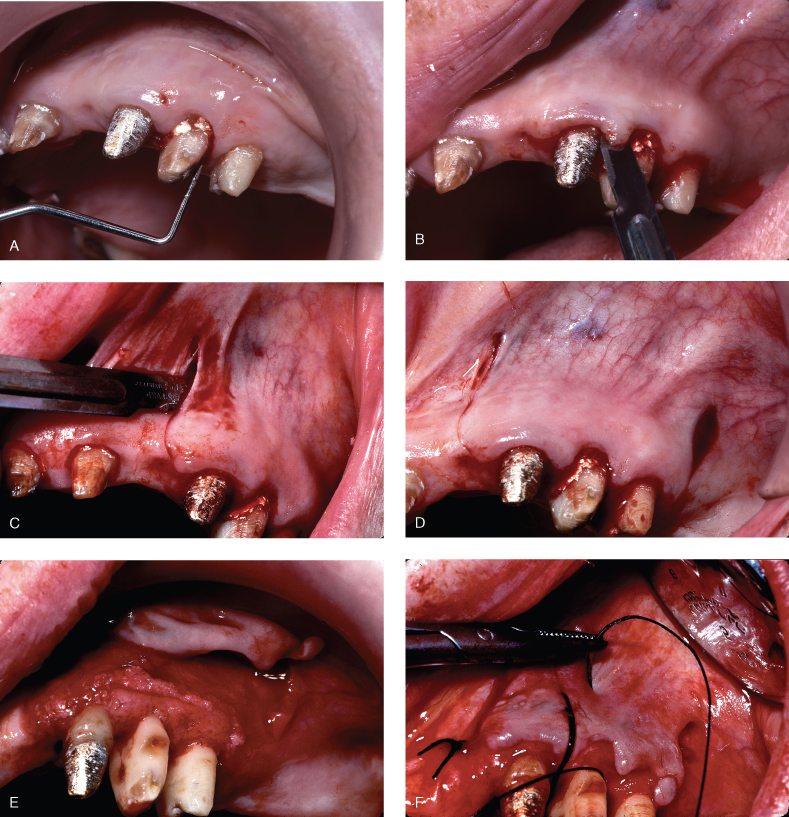 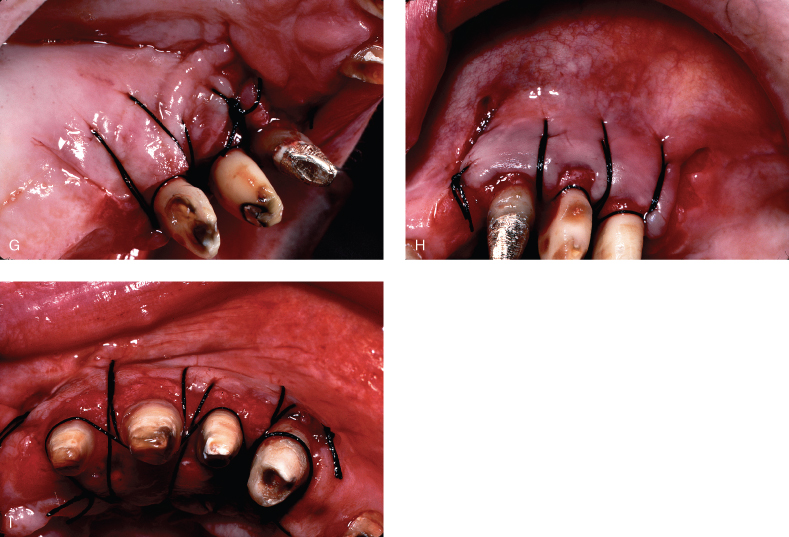 Osseous resective surgery, as stated previously, is done to reshape abnormal bone architecture resulting from periodontitis to recreate a more physiologic alveolar anatomy. A knowledge of the morphology of healthy periodontium is a prerequisite for osseous therapy. An awareness of local anatomy of the surgical area and good clinical sense is essential to determine the amount and location of osseous removal. In most areas of the mouth, the gingiva and alveolus follow the same architectural pattern. Marginal radicular bone is usually thin at the tooth junction whereas interproximal septa are coronal in relation to marginal bone on the buccal and lingual surfaces, creating a scalloped appearance. So if there were a two-walled interproximal crater that was centrally located bucco-lingually, the base of the crater would be selected as the location for the crest of the septa. In this case, ostectomy would be needed on both the buccal and lingual. If only one of the osseous walls of the crater was removed, bone support would be much less affected. Ostectomy would be on only one side, and the crest of bone interproximally would be positioned either to the buccal or lingual side of the contact area. However, lingual angulation of teeth and the location of the osseous defect may dictate bone removal in a way that creates an asymmetrical slope. For example, mandibular molars are usually inclined lingually and the lingual furcation and cemental-enamel junctions (CEJ) are more apical than the buccal. Often, interproximal defects on mandibular molars are located more to the lingual. Therefore if there were a crater interproximally closer toward the lingual, more of the lingual portion of the crater could be removed resulting in a sloping from the buccal to the lingual (“ramping”). In the maxilla, a palatal approach is often indicated for similar situations. Ochsenbein and Bohannan proposed a palatal approach to osseous craters on maxillary molars (Ochsenbein and Bohannan 1964). We often see interproximal craters and no deep pockets on the buccal and palatal sides. If the removal of the crater is attempted, then reverse gingival architecture could occur on the buccal. Also, if the buccal bone is removed to avoid this reverse architecture, exposure of furcations becomes a possible problem. This ramping avoids the thin bone usually found on buccal roots of maxillary molars as well as avoiding the possibility of exposing the buccal furca.