The aim of this chapter is to discuss the techniques available to restore anterior primary teeth.

After reading this chapter the practitioner should have knowledge of the different approaches to restoring caries in anterior teeth. In addition, you should have awareness that many of the techniques covered in this chapter are simple to provide, using equipment and materials that are easily obtainable.

Dental caries affecting the anterior primary teeth can have a major impact upon a child’s appearance (Fig 8-1) and, to this end, parents may seek the help of a dentist in order to improve their child’s appearance. Treatment depends upon the extent of the carious destruction and the age and level of cooperation of the child. It is worth noting that, ideally, most paediatric dentists would treat caries in the posterior teeth before the anterior, since the primary molars are important in maintaining arch length. Despite this, there is some value in treating small anterior lesions first in a treatment plan involving acclimatisation. Improving anterior aesthetics in a child may also boost the willingness of both the parents/carers and the child to cooperate with any planned preventive programme. 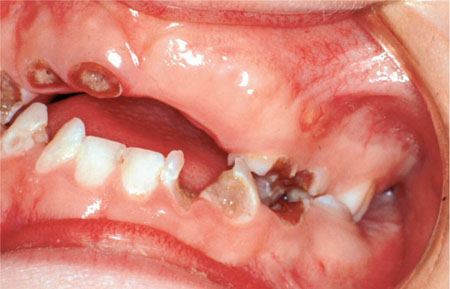 Fig 8-1 The primary dentition of a young child with rampant caries.

In very young children – those of preschool age – the presence of caries in the upper anterior teeth is often due to a condition known as early childhood caries, previously termed “nursing caries” (Fig 8-2). Prolonged and frequent drinking of liquids high in non-milk extrinsic sugars usually cause it. These drinks are often given to the child via a nursing bottle or feeder-cup, particularly at sleep-time, allowing sugary liquid to pool around the anterior teeth. In severe cases, the posterior teeth may also be involved. Early childhood caries or nursing caries in young children can be aggressive and develop rapidly, resulting in gross coronal destruction. The carious destruction in such cases often begins with a labial lesion (Class V), which may then become confluent with approximal (Class III) lesions – resulting in a large circumferential lesion. 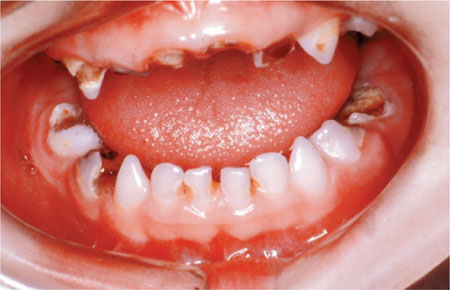 School -aged children may also develop carious anterior teeth, but lesions tend to be less aggressive than nursing caries and of a different distribution, with approximal lesions (Class III) common.

It is less common to see dental caries affecting the lower anterior primary teeth. These teeth benefit from being constantly bathed in saliva from the submandibular and sublingual glands, and the tongue acts to cover these teeth when infants drink from a bottle or feeder cup. If caries is present at this site, a diagnosis of rampant caries is appropriate.

Caries involving enamel should be treated by a package of preventive measures (not just topical fluoride application). Once dentine is involved, restorative treatment should be provided. When a decision has been made to remove the caries, should the tooth be left “self-cleansing” by using the method of discing, or will cavity preparation be required with subsequent restoration?

This is a useful technique to treat proximal lesions, which have not involved the pulp. It requires full or partial caries removal proximally, leaving either a crown with parallel sides mesially and distally or gently tapering towards the incisal edge. This approach is most appropriate in children older than three years, since the upper canines are fully erupted by this age. Once the primary canines are erupted it is thought that reduction in the mesiodistal width of the primary incisal edges will not result in space loss.

The amount of tooth removal is limited by the close proximity of the pulp horns. A high fluoride concentration varnish (e.g. DuraphatTM) can be applied after discing to promote remineralisation (Fig 8-3). 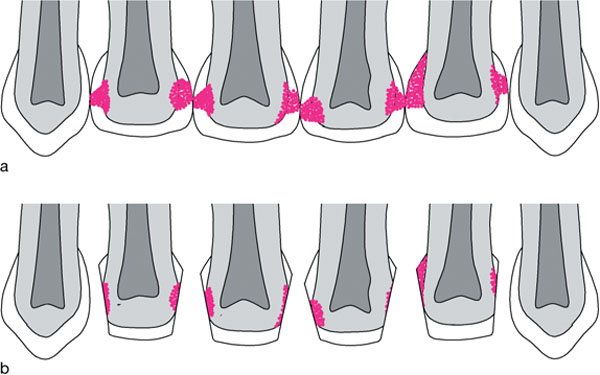 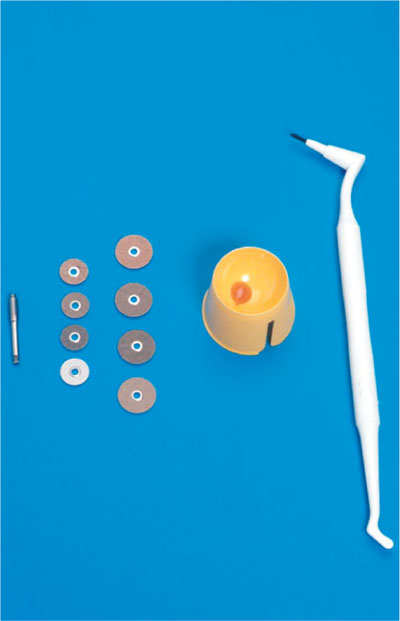 Fig 8-4 Miniature abrasive polishing discs and small mandrel used for safer discing. Topical fluoride varnish can be applied to the disced areas with a brush.

The discs are placed interproximally in order to remove superficial caries. It is vitally important that the patient’s lips and tongue are retracted to avoid iatrogenic injury. This can be achieved with cotton wool rolls (lips) and a small saliva ejector (tongue) and the dentist’s fingers!

The aim of this technique is to m/>