8. Anatomy and Physiology of Respiration and Airway Management

Anatomy and Physiology of Respiration and Airway Management

Upon completion of this chapter, the reader should be able to:

1. Review the anatomy of the upper and lower airways.

2. Recognize the potential for airway obstruction.

4. Review the physiology of respiration.

6. Identify the role of pulse oximetry in N2O/O2 sedation.

7. Recognize the clinical significance of diffusion hypoxia in N2O/O2 sedation.

8. Describe how to manage patients in the category of moderate sedation (> 50% N2O).

Any method of inhalation sedation involves those anatomic structures associated with the inhalation and exhalation of air and the exchange of gases. To integrate the pharmacologic properties of N2O into a clinical setting, the basic principles of the anatomy and physiology of respiration should be reviewed.

1 The Respiratory System Design and Function

A. Design: The respiratory system is primarily designed to perform the function of exchanging gases—functionally carbon dioxide (CO2) and O2—across pulmonary capillary membranes. The design of the system allows this function to be performed continuously and with minimal effort by the body.1

B. Function: Respiration is primarily driven at two anatomic sites—automatically by the brainstem (medulla oblongata) and voluntarily by the cerebral cortex.2

2 The Anatomy of the Upper Airway

1. N2O enters the respiratory tree at the nose.

3. Because the nose is also a primary entrance for gases used during inhalation sedation, it is critical to the effectiveness of the procedure that a patient is able to breathe well. Anatomic conditions affecting air passage through the nose (e.g., a deviated septum, enlarged tonsils and adenoids) may interfere with N2O/O2 delivery.

1. The pharynx is a cylindrical, muscular tube approximately 12 to 14 cm long.

2. It is divided into three sections (Figure 8-1): the nasopharynx, oropharynx, and laryngopharynx. 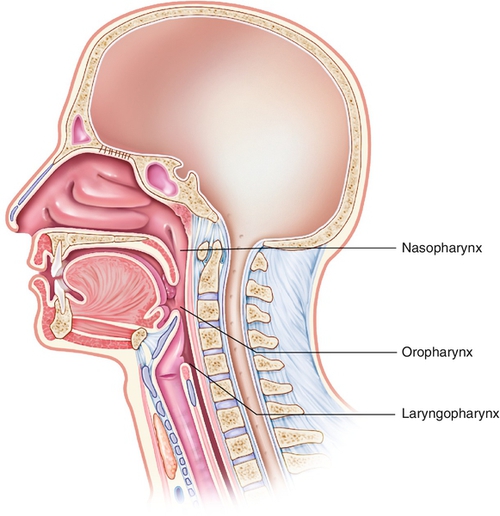 a. The nasopharynx is located behind the nasal cavity. The adenoids, tonsils, and openings to the eustachian tubes are found here. The soft palate separates the nasopharynx from the oropharynx.

b. The oropharynx opens into the mouth and serves as the link between the nasopharynx and the laryngopharynx. It acts as an entrance to the larynx and esophagus. Its boundaries are the soft palate and the epiglottis at the level of the hyoid bone. The epiglottis is connected by the medial glossoepiglottic fold and bilateral glossoepiglottic fold. These folds create a depression called the valleculae. Lateral to this central area on either side is a piriform recess. These recesses are the common location for collecting foreign objects in the upper airway, thereby protecting the lower airway. 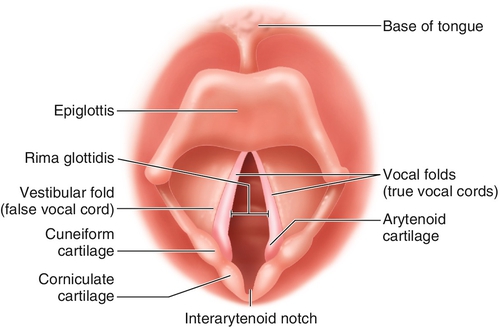 3 The Anatomy of the Lower Airway

2. Strong muscles (false vocal cords) that adduct to prevent entry of foreign objects protect the sensitive mucosa of the larynx. If the larynx is irritated, the defensive cough reflex is initiated. Coughing occurs when high pressure is produced in the lower respiratory tract by the closing epiglottis and vocal cords and the contracting expiratory and abdominal muscles. A sudden opening of the false vocal cords allows the air to explode out of the respiratory tract, carrying the foreign matter with it.2 It is important to note that when N2O is used appropriately, this vital defensive reflex remains intact.

1. The trachea, a muscular tube contiguous with the larynx, begins at the sixth cervical vertebra and is surrounded by horseshoe-shaped cartilaginous rings. It is approximately 11 cm long with a lumen size of approximately 20 mm. Figure 8-3 shows the trachea and bronchi. 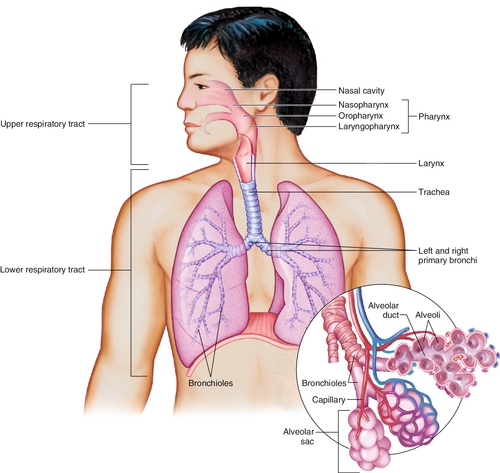 2. The trachea bifurcates asymmetrically into the right and left bronchi. A highly sensitive, neurologically rich area, the carina (Figure 8-4), marks this bifurcation. The carina is considered a backup defense mechanism for the cough reflex. If an object passes through the first defensive site (larynx), the carina will initiate an even stronger cough reflex secondarily. Submucosal swelling and partial obstruction in this area can result from a strong stimulus and lead to severe airway resistance. 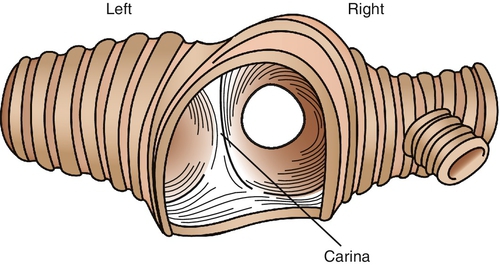 Figure 8-4Carina located at the bifurcation of the bronchi.

2. The mainstem bronchi diverge into smaller branches responsible for the upper, middle, and lower lobes of the lung. The right bronchus divides into three branches, which link to three upper lobes, two middle lobes, and five lower lobes. The left bronchus bifurcates into two branches that give rise to five upper lobes and four lower lobes. Each lobe contains conducting and respiratory bronchioli with dependent alveolar ducts, sacs, and alveoli.

1. Bronchioles are a continued division of the bronchi but are identified by the lack of cartilage.

2. The first 16 of the 23 generations of bronchiole divisions are considered conducting airways in normal anatomy.2 These airways are incapable of exchanging gases. At generation 17 the respiratory bronchioli begin the respiratory zone. These are smaller than the parent bronchioli but contain significantly more surface area.2

4 The Anatomy of the Respiratory Zone

1. Alveolar ducts mark the transition between bronchioli, alveolar sacs, and alveoli, as shown in Figure 8-3.

3. It is in the 300 million alveoli of an adult that the exchange between air and blood takes place.2

5 The Physiology of the Respiratory Mechanism

A. The medullary center in the brainstem controls the automatic respiratory process of breathing. Active inspiration is accomplished principally by the diaphragm and external intercostal muscles and assisted by the scalenes and sternocleidomastoids. As the diaphragm moves downward, the chest wall expands, creating negative pressure in the pleural space, thereby allowing a vacuum effect to pull air into the system. This motion, producing a drop in air pressure in the lungs, provides the principal mechanics for inspiration.

B. Air continues to flow until pressures from inside the lung are equivalent to atmospheric pressure. Expiration occurs passively as the chest wall and lungs recoil. This recoil causes another pressure change in which the compressed air is quietly pushed out of the lungs. Expiration becomes active only when changes in respiratory demands, such as exerc/>

Tags: Handbook of Nitrous Oxide and Oxygen Sedation 4e
Jan 12, 2015 | Posted by mrzezo in Oral and Maxillofacial Surgery | Comments Off on 8. Anatomy and Physiology of Respiration and Airway Management
Premium Wordpress Themes by UFO Themes
WordPress theme by UFO themes