Upon completion of this chapter, the reader should be able to:

1. Recognize common substances that are abused by inhalation.

2. Recognize the dangers of inhalant abuse.

3. Understand how nitrous oxide is abused.

5. Understand how euphoric effects associated with nitrous oxide abuse can be related to sexual phenomena.

7. Discuss legislation and regulation issues regarding the sale or purchase of nitrous oxide.

Nitrous oxide has been used for recreational purposes since its discovery in the late eighteenth century. Sir Humphrey Davy and Dr. Gardner Colton traveled extensively, proclaiming the exhilarating effects of inhaling N2O in those early days. Inhaling the gas was popular at social gatherings during that time and is still done at parties today. N2O abuse is an issue about which everyone should be aware. When chronically abused, N2O can have serious health ramifications. N2O should be given the same respect that is given to any drug.

All drugs that produce euphoria have the potential to be abused, whether they are injected, swallowed, or inhaled. However, not all drugs that can be abused through inhalation are defined as “inhalants.” The term inhalant applies to a group of volatile substances that have the ability to produce chemical vapors that can be inhaled with the intent of producing a psychoactive reaction1,2 and are not typically taken by another route of administration. There are many chemicals with varying effects that are found in a multitude of products. Typical modes of administration are inhaling nasally, called sniffing or snorting; inhaling contents from a bag, or bagging; holding a saturated rag in the mouth and inhaling, or huffing; and spraying the substance directly into the mouth.2,3

A. Inhalants are generalized to the categories of volatile solvents, nitrites, aerosols, and gases.2,4 Solvents may be industrial, household, art, or office supply products. Paint, computer cleaning products, or a variety of food, hair, and deodorant sprays fall into the aerosol category. Household gases, medical anesthetics, and organic nitrites are often misused.1

B. Inhaling chemicals found in a variety of household products is a method of achieving a quick, exhilarating high. It is particularly unfortunate that this type of inhalant abuse seems to be most common among children and adolescents.

1. Statistics have historically appeared in the literature.5 For example, a 2011 National Survey on Drug Use and Health revealed that there were 719,000 persons ages 12 years and older who used inhalants for the first time within the previous year6 and that 67.1% of users were younger than age 18 years when they first experimented with inhalants.6 The study indicated the average age at first use (approximately 16 years) was similar to the results from the 2010 study.6

2. A 2011 survey done by the University of Michigan Monitoring the Future Organization indicates that inhalant use had decreased since the mid-1990s among eighth, ninth, and tenth graders.7 And, 2008 data from the Capital Poison Center showed a decrease in the number of inhalant cases reported to U.S. poison control centers by 33% from 1993.8

3. Although inhalant abuse has been linked to teens, there are statistics that indicate fourth graders have used inhalants at least once.9 Use of inhalants as a means to a “high” can follow a child or adolescent into adulthood.

4. Many factors are cited as contributing to inhalant abuse. For youth and others who may be disadvantaged financially, inhalants present a way of “getting high” that is cheap and easily obtained.10 Inhalant use is seen in individuals who underachieve in school or who have dropped out, those who have been abused, or those who may have disordered eating behaviors.2 Pregnant women are also inhalant users. The National Institute on Drug Abuse reports that babies born to women who used inhalants may suffer significant health issues.2,11 Other users are those who have access to ordinary household products and are looking for an activity to occupy their time. Often, children do not know the consequences and think that using inhalants cannot or will not cause problems. Inhaling often appears as a game or as a challenge from a peer. Any child or adolescent could be using inhalants.

McGarvey and colleagues surveyed 285 adolescents and found that the 5 most frequently inhaled substances were gasoline, refrigerant (Freon), butane, glue, and nitrous oxide.12 With more than 1400 potentially hazardous products that can be inhaled, there could be many favorites.

2. Typewriter correction fluid was once one of the favored inhalants. It contains the chemical 1,1,1-trichloroethane or trichloroethylene. Through 1988, abuse of this substance was responsible for 27 reported fatalities. A leading manufacturer incorporated mustard oil into its product to discourage abuse.10 Health risks from inhaling this product include liver damage, cranial neuropathy, and cardiac toxicity.10

3. Computer cleaners or “dusters” are now common inhalants. The chemical refrigerants difluoroethane or tetrafluoroethane are compressed into canisters to remove the moisture from air. Several deaths have been reported from inhaling these products. In 2006, following the death of a Cleveland police officer’s son, Falcon Safety Products changed the composition of its compressed gas duster to include an additive meant to discourage inhalant abuse.13 Other manufacturers have done the same.

D. Many inhalants are central nervous system (CNS) depressants that produce sensations similar to the effects of sedation and anesthesia. However, abusers are looking for the exhilarating, euphoric, visually stimulating effects. Effects are produced in less than 1 minute and are usually not long lasting. Some experienced users claim to feel effects for up to 45 minutes and can, therefore, time their experiences to prolong their exuberance for hours.10 Disorientation can occur; nausea and vomiting have been reported, as well as sneezing, coughing, and salivation.14

E. Signs and symptoms of inhalant abuse can present as other illnesses. Be alert to sores around the mouth, bloodshot eyes, runny nose, breath odor, and glazed eyes.15

F. Obviously, these products are sold legally and are relatively inexpensive. They are found at home and in the garage. They are purchased in grocery, hardware, and drug stores. They can be packaged in small containers that are easily hidden. Most often, purchase of such products causes no suspicion. However, in some areas local sale restrictions may apply.

G. Other risk groups for abuse of these inhalants include those who may be occupationally exposed to the products. Those at risk may be janitors, painters, dry cleaning personnel, automobile repair workers, or hairstylists.10

I. N2O falls into the inhalant classification as well. It has similar pharmacokinetic properties to those products just listed. It is relatively inexpensive, readily accessible, and legal to purchase, and produces a rapid, euphoric high. Users recommend its use to others, claiming that it produces feelings of floating or flying; vivid, visual, colorful images; and loss of all inhibitions, making the user feel invincible. Of course, the negative side effects such as fatigue, fainting, nausea, and cardiac arrest are rarely mentioned among abusers.

J. Death has been associated with inhalant abuse. Death can occur the first time a person inhales a toxic substance. Cardiac dysfunction, respiratory depression, asphyxiation, convulsions/seizures, coma, and injury are the likely causes of death.2,16 Suicidal and accidental deaths have also been associated with inhalant abuse. Bowen and colleagues17 reported 52 deaths in Virginia between 1987 and 1996 that were associated with inhalation compounds. Thirty-nine of the deaths resulted from acute voluntary exposure.17 Victims’ ages ranged from 13 to 42 years, with 19 years being the average age when death occurred. Approximately 55% of deaths associated with inhalants are attributed to sudden sniffing death syndrome (SSDS)5 with 22% of these deaths occurring in first-time users.5 In these instances, it is likely that fatal cardiac arrhythmia occurs because of an adrenaline surge.

K. Many organizations are available for assistance with inhalant education and resource information. The National Inhalant Prevention Coalition, The National Institute on Drug Abuse, The American Association of Poison Control Centers, The Substance Abuse and Mental Health Service Administration, and many others have wonderful webpages and links to relevant information that could assist individuals and families.

A. N2O abusers tend to be somewhat older than those inhaling solvents and fuels, for example. As when it was first introduced, N2O is popular today at college social activities such as parties and concerts and may be advertised in college papers or flyers. N2O etiquette can be found in high-society magazines; reference to its use at elite parties can be found in novels. Now instructions for its use can be found even on the Internet. Celebrity misuse of nitrous oxide made news headlines when seizure-like symptoms and semi-unconsciousness occurred with the use of whippets.

B. Healthcare personnel who have ready access to the gas are noted recreational users. In general, health professionals have access to many drugs, and abuse is often not limited to one drug. Anesthesiologists and those in training, students in psychiatric and maxillofacial programs, physicians, and dentists are groups cited in the literature as being substance abusers.18–23 In a 1977 anonymous survey of medical and dental students, 20% admitted to the use of N2O socially.24

C. N2O is easy to obtain for recreational use.

1. Because it is commonly found compressed in cylinders and used for medical and dental purposes, it is easy to locate in such places as hospitals, clinics, or dental offices.

a. Several agencies have reported stolen cylinders from such facilities. Individuals employed in such a setting may be able to use the gas on site rather than take the risk of stealing the cylinder.

b. Distribution centers where cylinders of N2O are filled and distributed to various sites report occasional robbery attempts. Large cylinders previously stored outside of buildings have been moved indoors for security.

2. N2O is also used in the auto racing industry, since it supports combustion. It is used as an engine-boosting agent. However, N2O used for this purpose is often mixed with sulfur dioxide. Inhaling this noxious mixture is likely to render a person ill with vomiting, headache, and diarrhea, thereby discouraging abuse.

3. Messina and Wynne,25 researching homemade N2O, produced the gas according to instructions widely distributed in “head shops” and claimed that the process was easy and inexpensive. They also reported that significant concentrations of nitrogen dioxide and nitric oxide are produced with this method. These substances are toxic and can cause transient pulmonary toxicity and tissue damage.

4. N2O is approved by the Food and Drug Administration (FDA) as a food ingredient, because the dairy industry uses it as a whipping cream propellant. The gas expands into the cream, causing it to whip into foam. When used for these legitimate purposes, N2O is found in 3-inch-long containers called whippets (Figure 17-1). These containers hold approximately 4 to 5 L of N2O. These products are also misused for recreational purposes. 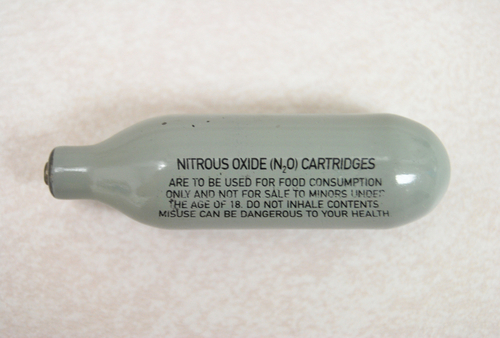 a. In addition to the whippet charger, a “cracker” and a balloon are purchased (Figure 17-2). A balloon is attached to one end while the charger is placed between the two halves of the cracker. A pointed extension inside the cracker pierces the diaphragm on the charger as the two halves are screwed together. The gas is expelled out of the charger and fills the balloon. 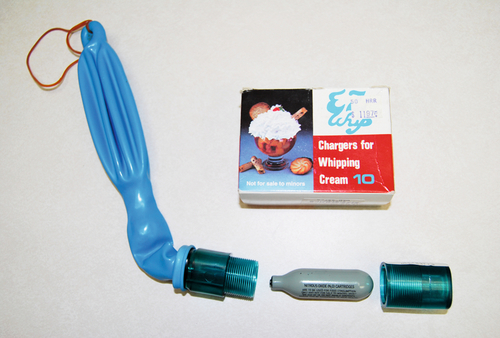