After completion of this chapter, the reader should be able to:

1. Understand the significance of the discovery of nitrous oxide and oxygen.

2. Recognize the paucity of pain control in the early nineteenth century.

3. Appreciate the foresight and ingenuity of Horace Wells as the individual responsible for recognizing the anesthetic value of nitrous oxide.

4. Appreciate the evolutionary path of nitrous oxide to its current place in the spectrum of analgesia and sedation options.

This chapter is written to add depth, breadth, and richness to the subject of N2O/O2 sedation. This perspective adds to the appreciation of this agent for the enhancement of patient comfort. Will it be directly relevant when administering N2O/O2 sedation? No. Will it convey confidence in the administration technique? Perhaps. But, no apology will be given for the pride taken in recognizing an American dentist for his tremendous gift to the world. The relief of pain and untold suffering and agony may be the greatest discovery of all.

In this era of sophisticated medicine and advanced technology, it is easy to forget the trials and tribulations taken by early medical scientists to advance standard practices such as N2O/O2 sedation. What these scientific pioneers accomplished while experimenting with unknown, potentially dangerous materials and primitive equipment was courageous. They often sacrificed their own health and safety for scientific advancement. It is because of the bravery of these early medical explorers that we can provide safe and effective analgesia and anesthesia today.

1. The discovery of both N2O and O2 is credited to the English gentleman Sir Joseph Priestley.

2. The actual discovery dates of these gases are somewhat in question because of Priestley’s own uncertainty about what he had discovered. The periods cited in the literature vary from 1771 to 1777.1,2 During this time, he repeated several experiments that ultimately resulted in the gases we know today as N2O and O2.

3. Priestley experimented with nitrous air—a mixture of iron filings, sulfur, and water. The end product was a residual gas with considerably less volume than the original nitrous air. He called this “dephlogisticated nitrous air,” which is now known as nitrous oxide.1,2

4. During his experiments with nitrous air, Priestley became aware of another gas, which he termed “good air.” He found this air to be “fit for respiration,” and he titled this discovery “dephlogisticated air,” which is now known as oxygen.1,2

B. Inhalation of N2O

1. Humphrey Davy, at the age of 21, was interested in the field of medicine. Although N2O gas was allegedly etiologic to many diseases and deadly conditions, Davy ignored the warnings and, in England in 1798, became the first to chronically inhale pure N2O.

2. Instead of incurring some dreadful plight, Davy found the experience very pleasurable; he became euphoric and felt like laughing. He continued his experiments, saying the “sensations were indescribable” and that he had experienced “the highest degree of pleasure.”3 Other descriptions of his experiences with N2O included “ideal existence” and “overwhelming joy.”4 Davy published the results of his experiments in booklet form in 1800.3

3. It was when Davy experienced diminished pain from a toothache while using N2O that he began to believe it could affect pain sensations. This was the first indication of the anesthetic properties of the gas. Davy had no idea of the significance of this experience.

4. For the next four decades, experiments with N2O continued, but not in the medical field. Gardner Quincy Colton, transplanted to New York at a young age, began medical studies with financial help from his brother. When funds to continue his studies became unavailable, Colton embarked on a professorial track in which he promoted himself as a lecturer on the subject of nitrous oxide.2 Colton’s shows became entertainment for many since participants were invited on stage. These shows were touted as a way for people to enjoy the evening during which they could “laugh, sing, speak, or fight.”4 N2O use became the trendy activity at social events and in university settings (Figures 1-1 and 1-2).

5. The anesthetic value of N2O first realized by Davy was not pursued. 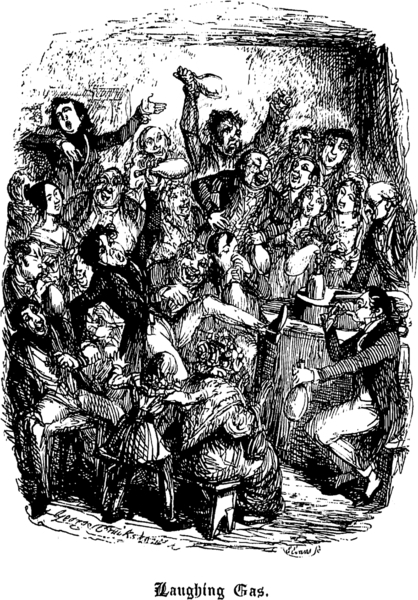 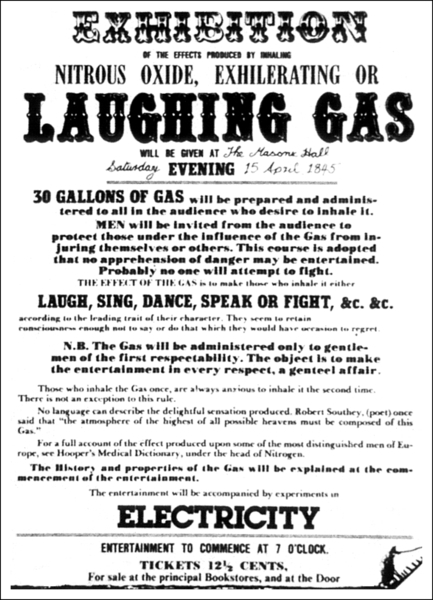 1. During the early nineteenth century, although reckless use of N2O continued, the medical community was hungry for pain relief. Surgical procedures often resulted in death of patients for many reasons. Poor infection control often led to secondary infections, and pain control was desperately needed.2

2. The most commonly performed operations were amputations, tooth extractions, and abscess drainings. These surgeries needed to be completed quickly and often lasted less than 90 seconds. During lengthy procedures, patients would succumb to exhaustion and/or shock.

3. The greatest medical advance at that time was the suture. Wounds could be sewn closed rather than cauterized with a hot iron; extremities remaining from amputations did not have to be dipped in a boiling solution to create hemostasis.5

a. Brute force to control a patient

b. Alcohol or opium

5. Prospective surgical patients were often placed in serious dilemmas—choosing between the pure torture and unfathomable pain associated with surgery or living with a disease or condition that would likely result in a slow, agonizing death.

1. On December 10, 1844, Dr. Gardner Colton hosted the Grand Exhibition in Hartford, Connecticut. This was an exhibition, similar to others he had orchestrated, to demonstrate the exhilarating effects of inhaling N2O.2,6

2. Horace Wells, a dentist, was in attendance. As a participant, Wells volunteered to try the gas on stage, believing he would not “make a spectacle of himself.” However, that was exactly how Mrs. Wells described his performance.4

3. Another participant, a young man named Samuel Cooley, volunteered to inhale the gas in front of the audience. He began to feel the effects of the gas immediately. As he was euphorically jumping around, he struck his leg against a bench, causing a deep, bloody laceration. Cooley was unaware of the extent of the injury and professed that he did not feel any pain.

4. Wells was very intrigued by the apparent nonresponsiveness of Cooley to pain and asked Colton whether a tooth could be removed under the influence of N2O. Unaware of any analgesic properties, Colton agreed to bring a supply of gas and meet Wells at his office the next day. There, Wells breathed the gas himself and had a colleague, Dr. Riggs, extract one of his teeth. Wells exclaimed “the greatest discovery ever made,” and “a new era in tooth pulling.” Colton instructed Wells how to prepare the N2O and considered Wells a “visionary enthusiast.”6 Figure 1-3 shows a unique portrait of Wells that appears at the Wadsworth Atheneum in Hartford, Connecticut. 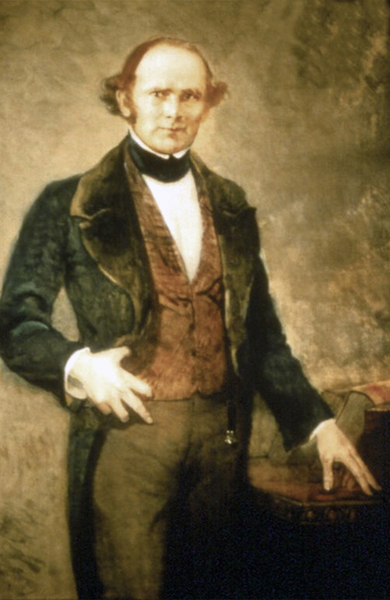 1. Wells used N2O during extractions on several patients with great success. Anxious to demonstrate this procedure in front of his peers, Wells was allowed to operate in front of sev/>