At the end of this chapter you will have a clear understanding of:

When undertaking conscious sedation, knowledge of specific anatomy is essential in order to understand how the various sedation techniques administered to patients act and work within their bodies. Increased awareness will aid identification of the potential complications, because the action of each is known.

The human blood is a fluid connective tissue which forms the transport system of the body. Without it the body would cease to function. An adult body contains approximately 5L of blood (8.80 pints), which accounts for approximately 7–8% of their total body weight. It has a pH of 7.4 and four main groups A, B, AB, and O, with O being the most common and the universal recipient from all other groups. Blood is made up of plasma, which equates to 55% of the volume and three types of blood cells – red, white and platelets, which make up the remaining 45% of the volume. Blood cells are sometimes referred to as corpuscles, with all being produced in the bone marrow, which is a soft spongy material that fills the cavities of the bones. Every day millions of red and white blood cells are produced and formed by a healthy person [1–3].

They make up 99% of the total number of blood cells and are also known as erythrocytes. Their main function is to carry oxygen from the lungs to the cells within the body and help remove the waste carbon dioxide for transportation to the lungs to be exhaled. They perform this function through the haemoglobin, an iron containing protein to which the oxygen attaches, giving the blood its red colour. They are circular in shape and have a dip in the middle, making them bi-concave discs, which increases their surface area, thus allowing more oxygen to be carried to the cells of the body. Circulating red blood cells have a life span of approximately 120 days, with their membrane becoming fragile as they age. They cannot repair themselves, with many dying in the spleen. As they become trapped in the narrow channel they get broken and destroyed. During this process the haemoglobin is further broken down into its different components which are either recycled in the body or disposed of. A deficiency of haemoglobin is called anaemia [1,2].

They are also known as leucocytes. Their main function is to help the body fight infections by circulating, awaiting transportation to an infected site. They are phagocytes, increasing in number when infections are present, to protect the body, by engulfing and destroying micro-organisms and removing dead or injured tissue. They are larger than the red blood cells, variable in shape with a nucleus, but fewer in number. Their life span is approximately 13–21 days. Leukaemia is a malignant disease affecting these cells [1,2].

These are the smallest of the blood cells whose function is to assist clotting. They are also known as thrombocytes and are small, oval, colourless sticky discs that do not have a nucleus and are irregular in shape. Their life span is 8–10 days and without them bleeding would not be arrested. They circulate around the body, inactive until they meet a severed vessel whereupon they gather at the site of the injury and their sticky surface, coupled with other substances within the blood form a clot to block the flow. Unfortunately, they can form a clot even when a vessel has not been severed. This can lead to deep vein thrombosis which is dangerous as it can cut the flow to an area of the body and prevent entry of oxygenated blood. A stroke is a result of a clot that has lodged in an artery of the brain. If it is suspected that a patient has an abnormal clotting time then it can be investigated by providing a blood test known as ‘International Normalised Ratio’, which establishes their clotting time. Haemophilia, Von Willebrand’s disease and Christmas disease are all very similar and all are caused by a missing factor in the coagulation of the blood [1,2].

This is the liquid element of the blood which is mainly formed from water. It is a clear, slightly alkaline, straw-coloured fluid which is used as a transport medium and carries blood cells and various other substances throughout the body, such as hormones, nutrients, proteins, iron, antibodies, clotting substances and waste products [1].

The human heart is approximately the same size as an individual’s fist and requires oxygen to grow, because as an individual’s body grows so does the heart. That is why a baby’s heart rate is faster than a small childs, as their growth is more rapid. The heart receives the increased oxygen provided through the faster heart rate. As a person gets older the heart rate slows down and is generally stabilised by the age of 18, when the heart is fully developed (Figure 7.1). A heartbeat can be felt where an artery passes over a bone and is known as a pulse. This is a wave of distension of the artery which travels to the periphery and is referred to as beats per minute and will increase or decrease according to the requirement of the body. There are various areas around the body where a pulse can be felt, with the most common being the radial (Table 7.1). A blockage in any part or all of the vessels that supply the heart will cause a heart attack and if it is not cleared quickly will cause permanent damage to the heart muscle, reducing the effectiveness of the heart’s pumping action. The heart should be looked after by leading a healthy life, hopefully preventing disease [1,4,5]. 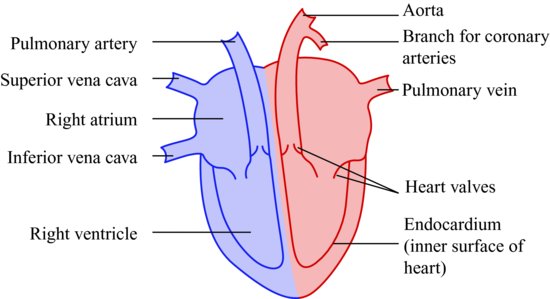 Table 7.1 Pulses situated around the body.

The heart is divided into four chambers. It has two upper chambers known as the atrium, one on the right and one on the left and two lower chambers known as the ventricles, one on the right and one on the left. The right side of the heart contains deoxygenated blood and the left side oxygenated blood. They are divided by a septum, which provides a dense muscle wall to prevent leakage (Figure 7.2). The amount of blood flow through the heart is controlled by valves, which also prevents the blood flowing backwards, ensuring a continuous flow through the heart. The heart is situated between the lungs and underneath the sternum (breast bone), to the left of the chest cavity. It acts as a double pump, pumping blood from the heart to the lungs to become oxygenated. This is known as pulmonary circulation. It also pumps oxygenated blood around the body, known as systemic circulation. The heart muscle receives oxygenated blood through coronary circulation [1].

Figure 7.2 Diagram showing septum which divides the right and left sides of the heart.

Figure 7.3 Blood flow through the heart. 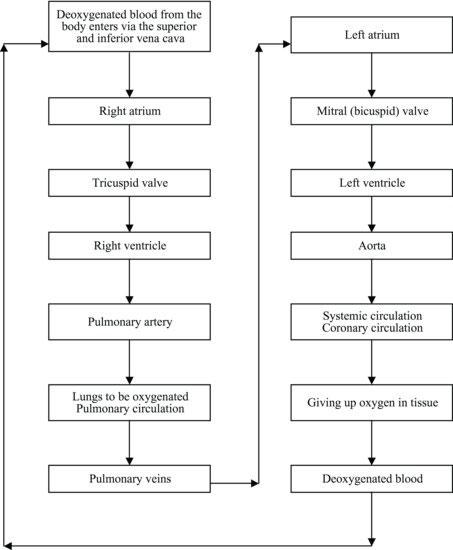 Blood flow through the heart

The blood that has circulated around the body supplying it with oxygen and collecting the waste carbon dioxide returns to the heart without oxygen. It enters the heart via two vena cava vessels, with the superior vena cava receiving blood from the upper body and the inferior vena cava receiving blood from the lower part of the body. It then enters the right atrium and opens the tricuspid valve due to its weight, allowing the blood to enter the right ventricle. The tricuspid valve closes to prevent reverse flow. The right ventricle contracts to force the blood through the semilunar valve at the entrance to the pulmonary artery and is then transported to the lungs. An exchange of gases occurs (explained later on in this chapter). The oxygen-rich blood returns to the left side of the heart via the pulmonary veins (two from each lung) to enter the left atrium. Due to its weight, />