The basic anatomic characteristics of the teeth have been known for many years. However, because of the wide variations in dimensions and clinical presentations, it is necessary to understand the dental anatomy for each patient and for each tooth before endodontic therapy is attempted, with particular consideration of the anatomy of the root canal(s)—the “endodontium”—and the surrounding tissues.

The first comprehensive and systematic description of root canal anatomy was published by Carabelli in 1844. His publication showed vertical and horizontal sections of teeth depicting in detail the root canal system and structure of the teeth. Since then, various methods have been developed to better depict and describe the root canal systems within the teeth. The current computed tomography (CT) techniques permit highly detailed three-dimensional (3D) images of root canal systems. These technical advances show promise of bringing fresh perspectives for endodontology in the coming years.

The earliest depictions of the highly variable, 3D nature of the dental pulp with lateral canals and arborization were published by Hess (1917; Zurich, Switzerland). He injected the root canals with a natural rubber and then removed the hard dental tissues using hydrochloric (muriatic) acid. These research preparations are still, even today, highly impressive and provide valuable descriptive material for all generations of students. Other research techniques (Adloff, 1913; Vertucci, 1974, 1984) rendered the enamel and dentin transparent, therefore allowing direct view of the internal tooth components and the fine tissue structure of the dental pulp.

It was in the 1950s that W. Meyer (Göttingen) helped provide the basis for a complete understanding of the apical third of the tooth root: serial sections 50 μm thick provided the basis for wax models of the distal 6 mm of a large number of teeth. Meyer demonstrated that the apical “delta” of the roots exhibits numerous lateral canals and arborization. The goal of endodontic techniques employing heat and chemical agents is to open and disinfect the “portals of exit” (POE) and then close those POEs using appropriate sealers. In the case of surgical root tip resection (apicectomy), it is desirable to remove the apical 3 mm of the tooth root and then to retrogradely instrument an additional 3 mm into the root canal system. Subsequently, the retrograde cavity is sealed with an appropriate material. On the whole, this procedure either removes or completely seals the apical 6 mm of the canal, thus eliminating the majority of lateral canals or isthmus structures (Weller et al., 1995).

Numerous studies have attempted to delineate the average number of roots and root canals, or to define ethnic differences. Such studies have provided some indications, but they remain only vague descriptions.

The radiographic depiction of the tooth and its root canal system remains the most important component of endodontic therapy. Many scientific investigations have dealt with this component; among these, the most extensive study involved 4183 extracted teeth with 7275 root canals (Pineda and Kuttler, 1972). It is somewhat unfortunate that the noninvasive, radiation-free technique of magnetic resonance imaging (MRI) has not yet contributed significantly to a better understanding of the microstructure of the endodontium. On the other hand, CT, micro-CT, spiral-CT or 3D CT techniques have provided unexpected advancements in the visual depiction of the fine anatomy and anatomic structure of the endodontium, a feat that was long considered impossible.

CT has been used in the field of dental implantology and preoperative planning for apicectomy for a long time (Velvart et al., 2001). The extreme precision and detailed resolution of micro-CT is clinically desirable, but due to technical limitations it is not yet a reality in routine endodontic practice.

The flat-panel, detector volume-CT provides very impressive images with high resolution, and in one in vitro study has demonstrated the capacity for 3D representation of vertical root fracture with a resolution of up to 140 μm (Hannig et al., 2005).

Clinical application of digital volume tomography (DVT) has already begun. With devices such as Accuitomo (J Morita) and Galileo (Siemens) it is possible to create images that use radiation dosages similar to those for panoramic radiographs but require less exposure time. Depending on the image area, a resolution of 125–300 μm is possible. In addition, instruments are now available with predetermined apertures (TACT = tuned aperture CT) that take numerous conventional 2D CT images and then mathematically compute a 3D image (Nair, 2003; Farman and Farman, 2005). The advantages include a low dosage of radiation, simplified image construction, and good resolution (Nair and Nair, 2007). 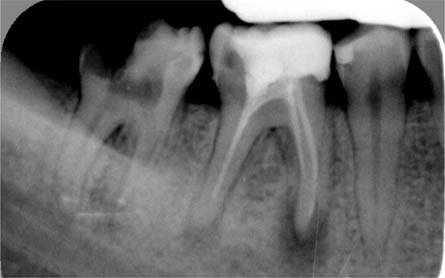 A periapical radiograph of teeth 45–47: This is a 2D depiction from the buccal aspect with a standard level of resolution. Tooth 46 has an inadequate root canal filling and large periapical lesions both mesially and distally. The crown of tooth 47 has been virtually destroyed by dental caries.

A comparable CT view of teeth 46 and 47 clearly demonstrates the differences in image quality between traditional radiography and 3D CT (here, Accuitomo, J. Morita). With CT, the resolution is somewhat lower, but the inflammatory foci are more clearly discernible and actually appear to be larger; this picture more clearly depicts the reality of the situation.

Right: The mesial view illustrates the relationship between the root canal fillings and the apical lesions. 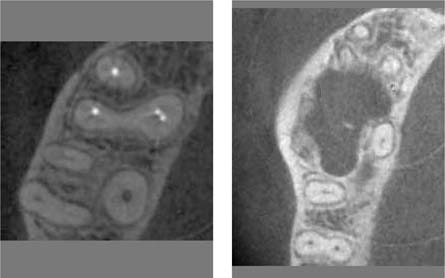 Left: The technique of volume tomography permits the depiction of any desired sectional plane. This image shows the four root canals of a maxillary first molar.

Right: Another image clearly showing the massive osseous destruction below the root tips of a maxillary second molar (courtesy of Dr. Hubert Amschler).

CT was developed by Godfrey Hounsfield, and by 1971 had matured enough to be used in practice. The problems of the original high radiation dosage and the low resolution in the millimeter region have long been overcome by a series of technological advancements. Today, laboratory experiments demonstrate a resolution of about 10 μm using axial high-resolution micro-CT (Jung et al., 2005). This level of precision makes micro-CT data comparable with histology (Balto et al., 2000), and permits morphometric analysis of bone, teeth, root canals, and the surrounding tissues (von Stechow et al., 2003).

A systematic micro-CT examination of all tooth groups provided the basis for a fascinating interactive CD-ROM (Brown and Herbranson, 2005). 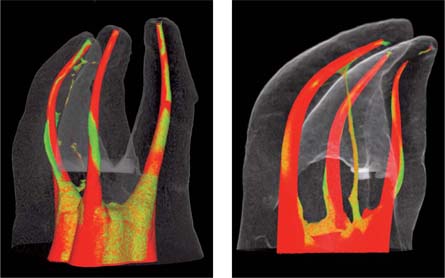 A 3D reconstruction of a maxillary molar scanned with micro-CT. The external surfaces of the tooth are seen as transparent and the root canals are colored. Following instrumentation using FlexMaster (left) or ProTaper (right), the various areas that remained noninstrumented by the files are clearly seen (green: non-instrumented; red: instrumented).

Micro-CT data can also be used to portray a 2D image. Using this technology, it is possible to identify in various sectional planes, the continually changing cross section as well as the root contours and the root canals. 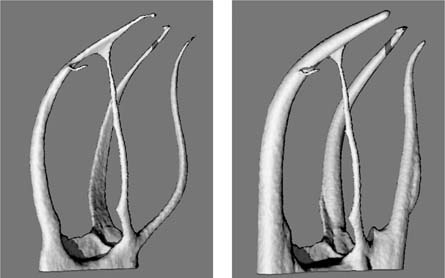 Following computer calculation and 3D reconstruction from the raw data, it is possible to visually eliminate the external parts of a tooth and display the root canals alone.

Right: Canal width following root canal instrumentation using the Pro-Taper. Note that one root canal (the mb2) was not instrumented (the narrow structure in the middle of the field).

MRI was developed in 1973 (Lauterbur) and has been in routine clinical use for over a quarter of a century. In contrast to standard radiographic techniques, MRI does not require the use of ionizing radiation, and has the capacity to accurately depict water and/or fat-containing tissues with high hydrogen–proton components. Traditionally, teeth and bone could not be depicted at all on MRI, or only poorly. Research in recent years has provided ways to overcome these limitations (Baumann, 1995).

Using special high-resolution spectrometers and a sufficiently high field intensity of 7 Tesla, the first magnetic resonance microscopy (MRM) images were produced (Baumann, 1995; Baumann and Doll, 1997). Improved measurement sequences (constant time imaging, CTI) provided more detailed images (Appel and Baumann, 2002). Clinical imaging of teeth remains difficult because of the small component of hydrogen protons. One measure that has proven effective is to have the patient hold water or an MR-contrast substance in the mouth, to allow use of a higher MR signal (Olt and Jakob, 2004).

6.7 MRM of a mandibular molar

Middle: Conventional radiograph of the molar.

Right: With 3D reconstruction, the external tissues of the tooth can be eliminated electronically, thus permitting a clear view of the internal surfaces of the tooth and the contour of the pulp.

6.8 CTI of a mandibular molar

Left: The 2D images perpendicular to each other reveal the anatomic details of a particular level of the mesial root (above, right) and the root canals (below, left).

Right: Four views from the 3D reconstruction illustrate the dimensions of the pulp horns and the expanse of the root canal system.

Middle: 2D reconstruction from the MRM data set. The cross section (upper left) through the root permits assessment of the primary canal centrally and a white spot. A cross-section parallel to the horizontal (below left) shows the course of a lateral canal.

Right: This selected view from the 3D reconstruction clearly reveals the course of the lateral from the main root canal to the labial surface of the root.

With the widespread use of the clinical microscope, more and more dentists are becoming aware of the huge anatomic variations within the root canal systems. This reiterates the importance of classification systems, for instance the systems according to Weine, Ingle, or Vertucci (1984). A myriad of features—accessory canals, lateral canals, pulpo-desmodontal canals, C-shaped canals, multiple foramina, arborization, deltas, connections between and among canals—are now recognized, and must always be considered during root canal instrumentation and filling.

The classification of the degrees of difficulty of endodontic treatment according to Ingle (1996) is as follows:

• Type I: Insignificant curvature of the root canal

• Type II: Anatomic problems such as severe dilaceration, a complex apical region with divergence or arborization of the canal, with numerous foramina

The classification of root canals according to Vertucci (1984) into eight types is helpful in clinical practice.

In addition to the macroscopic anatomy of a root canal, the fine microscopic features of the apical root canal that can include initial dimension of 60–100 μm play an increasingly important role. The microscope permits searching for, and visualization of, the smallest files (size 6).

In simple terms, the root canal is a structure resembling a tapered tube. It is widest at the coronal end (pulpal orifice) and narrowest at its apical end, which is formed by a constriction about 1 mm proximal to the apical foramen, the physiologic foramen (Kuttler, 1955).

Research studies and practical clinical experience have shown, however, that the pulp canal orifice is often narrowed due to the deposition of tertiary dentin and an apical constriction is present in only about 50% of teeth. In addition, in the apical region of the root, the canal walls are parallel, not tapered, and many root canals, as well as the physiologic foramen, are oval and not round (Wu et al., 2000; Briseño-Marroquin et al., 2004). Briseño-Marroquin et al. (2004) demonstrated that the frequency of occurrence of accessory foramina in the mesial roots of maxillary molars was 33% and in the mandibular molars 26%.

More than 30 years ago, Kerekes and Tronstad (1977) demonstrated that there were significant differences in the width of the apical portions of root canals, with variations from 0.3–0.4 mm to 0.7–0.8 mm within 1 mm of the apical opening of the root tip.

All maxillary anterior teeth have one root and one canal. Therefore, these teeth are type 1 according to the Vertucci system. Exceptions to this rule are extremely rare. For endodontic treatment, the direction of approach to the root canals in these teeth is parallel to the long axis of the tooth; the root canal normally courses obliquely toward the distal.

The pulp chamber is significantly wider in the buccolingual direction than in the mesiodistal (md) direction. This must be considered during canal instrumentati/>