The term “endodontic surgery” encompasses a variety of invasive procedures that have both surgical and endodontic aspects in equal measure. The most common endodontic surgical procedure is the root resection (apicectomy). A standard clinical procedure, apicectomy is characterized by removal of the root tip, retrograde preparation of accessible root canal areas, and hermetic retrograde canal closure, with the removal of inflamed extra-radicular tissue and—if present—any extruded root canal filling materials.

Other endodontic surgical procedures are hemisection and root amputation, intentional reimplantation, and transdental fixation. The latter two examples generally play a minor role (intentional reimplantation) or no role at all (transdental fixation), while hemisection/root amputation could be considered for periodontal and/or restorative reasons (e.g., grade 2 or 3 furcation involvement). This chapter will focus on root resection because of its significance within the spectrum of endodontic surgical procedures.

The development of the surgical procedure of root resection can be traced back to Partsch (1899). Although these surgical techniques have been continually refined over the past 100 years, it is the newest technical developments and better biologic and microbiologic understandings that have given the procedure new impetus over the past 10 years—whether initiated by endodontologists or modified from other dental specialties. Of particular importance from a technical point of view are the following:

• introduction of the operating microscope;

• use of biocompatible materials for the retrograde closure of the root canal;

Long-term clinical studies, however, have demonstrated that adequately performed conventional endodontic therapy, even with a certain degree of infection in the root-canal space, still results in success rates of between 75% and 85% (Weiger, 1998, 2005), suggesting that failures are an exception. Persistence of periapical lesions can be due to intracanalicular etiology as well as the result of extraradicular infections or so-called true cysts, or—in rare cases—foreign-body reactions.

For persisting lesions that cannot be successfully managed by orthograde re-treatment, apicectomy offers the possibility of eliminating microorganisms remaining in the apical portion of the canal space, as well as preventing them from accessing the periradicular space by means of a retrograde filling. During the surgical procedure potential microbiota from extraradicular origin are eliminated as well.

The prerequisite for an apicectomy is a restorable tooth with a failed endodontic treatment but adequate remaining periodontal support that permits apical surgical access. Any coronal leakage must be prevented prior to the surgical procedure (Löst, 2001). In general, conventional retreatment is the first option if the root canal can be accessed.

Apicectomy is indicated when other types of treatment appear too complex or a successful outcome is uncertain, for example removing a large post under an intact and functional full coverage crown. The decision for apicectomy must also include considerations such as clinician’s experience and availability of appropriate technical equipment.

The aim of the apicectomy is cleaning and shaping of accessible root canal areas followed by sealing with a retrograde filling that prevents percolation of microorganisms apically (coronal and apical leakage).

Right: The transparent view of the tooth displays the fine ramifications of the canal system. (Courtesy of Dr. Reuver.) 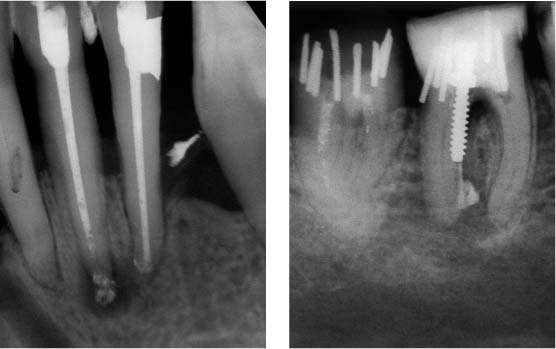 40.2 Contraindications for a surgical procedure

Right: Mandibular molar with multiple perforations into the furcation area resulting from a misaligned post and dentinal pins. This tooth cannot be saved.

Middle and right: Reinstrumentation of both root canals, followed by application of calcium-hydroxide medicated dressing, resulted in healing of the apical lesion.

Apicectomy is only indicated when initial treatment, and usually retreatment, have failed and the intraradicular and/or extra-radicular cause persists. In such cases, despite previous endodontic efforts, one must assume the presence of bacteria within the root canal system, which are not accessible by conventional endodontic treatment, or individual persisting infection of extra-radicular origin, and/or a true radicular cyst.

Left and middle: Despite an apparently acceptable conventional endodontic result, a periapical lesion and fistula persisted.

Right: Following surgical intervention the lesion is in the process of healing. 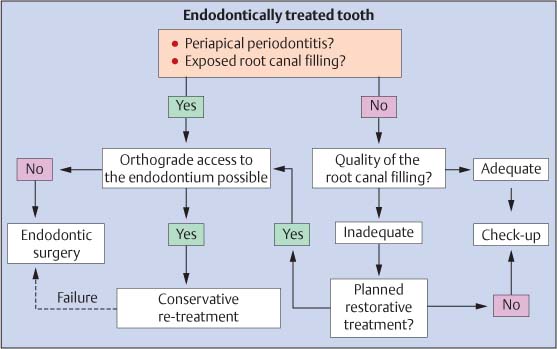 Left: The maxillary molar has an apical lesion and an adequate coronal restoration.

Middle: Due to the potential risk of fracture during post removal, an apicectomy with retrograde filling was carried out.

An important factor is the radiographic evaluation. Radiographs taken using paralleling and orthoradial projection are essential; or in some cases eccentric radiographs, in order to evaluate without distortion the apical anatomy in relation to surrounding anatomic structures. It is also recommended to use additional radiographic imaging techniques to visualize structures such as the mandibular canal or the mental foramen.

In complex cases, a 3D computed tomography (CT) evaluation (e.g., mandibular premolars and molars as well as maxillary molars with palatal roots involved) provides not only critical pre-operative information concerning the feasibility of the procedure, but also assists in surgical planning with regard to the extent of the lesion and the exact location of the root tip in relation to the buccal/palatal bone, the mandibular canal, or the maxillary sinus.

Right: Apical pathology on a mandibular anterior tooth, with acute gingivitis. The crown margins are inadequate.

Left: Periapical radiograph of a mandibular first molar. The mandibular canal appears to be sufficiently distant from the root apex.

Right: Overview with CT. The scale identifies the location of the axial sections in Figure 40.9.

The introduction of the dental microscope into dentistry in the early 1990s opened the door for true microsurgery. Using appropriate magnification and miniaturized instruments, it optimizes soft-tissue management, allows a smaller access to the apical area, exacting retrograde preparation, and, finally, precise placement of the retrograde filling material.

Magnification of up to ×25, in combination with optimal and shadow-free illumination of the operating field allows excellent inspection of important anatomic details. The microscope can help to localize isthmus formations, C-shaped configurations, noninstrumented root canal areas, etc. It can also assist in the detection and assessment of vertical fractures. 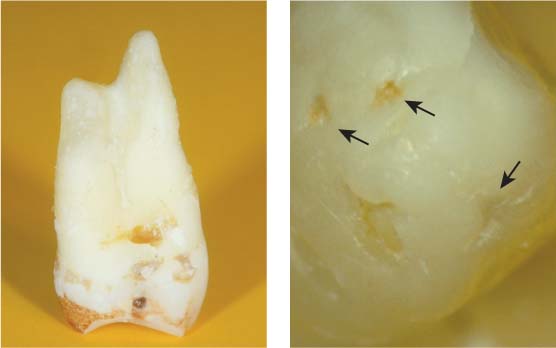 Left: Low-power view of an extracted premolar. Details of the apical anatomy are not visible.

Right: High-power view (magnification ×25) of the palatal root of the same tooth with several ports of exit at the apex (arrows).

Microscope in use during a surgical procedure, with a color monitor and an observation eyepiece for the dental assistant.

Left: Visualization of the light path. 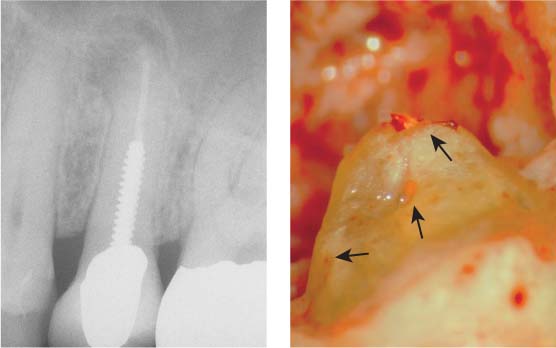 Left: Radiograph of a premolar with an apical lesion.

Right: Following apical curettage, the ports of exit of the apical delta can be discerned at magnification ×25.

Essentially healthy gingival (periodontal) conditions in the area of the surgical intervention are advantageous for optimal healing and minimal gingival recession. Atraumatic surgical techniques and understanding of wound healing principles will help to achieve optimal results.

Mucoperiosteal full-thickness flap. A mucoperiosteal flap consists of gingival mucosal tissues as well as periosteum. The critical ratio of the flap width to height should not be less then 2:1. Therefore horizontal extension of the flap may involve adjacent teeth.

Rectangular flap. A rectangular flap provides excellent access to the apical area and is raised by an intrasulcular incision combined with two vertical releasing incisions. The vertical incisions should dissect the periosteum to the bone and be placed parallel to the long axis of the tooth. This will sever the least number of blood vessels, which run vertically from the apical to the coronal region. Although the rectangular flap is the most frequently used flap, its disadvantage is the possible marginal gingival recession.

Submarginal flap (as described by Ochsenbein-Luebke). Restorations with subgingival margins are prone to recession following marginal mobilization. In such cases, instead of the intrasulcular incision, a submarginal incision can be made. The incision is placed within the attached gingiva and follows the course of the gingival margin. Importantly a width of at least 2 mm of the attached gingiva should be preserved, coronal to the horizontal incision. Therefore adequate width of attached gingiva is required. Another prerequisite is that the osseous defect should not extend to the cervical portion of the root.

Triangular flap. This variation with only one vertical, usually mesially placed releasing incision provides only limited access to apical areas. This approach can be useful for the treatment of cervical resorption, perforations in the cervical and middle sections of the root, or for the resection of rather short roots. An advantage is the possibility of extending the flap. This can be accomplished by extending the intrasulcular incision, or by adding an additional vertical releasing incision.

Right: Application of the anesthetic at the apical region. The entire intended flap area is perfused with anesthetic solution.