Dentists spend most of their time treating dental caries, and yet many clinicians have a poor understanding of the mechanisms by which caries is initiated, how to identify patients at risk and how to put management plans in place to ensure that the disease does not progress. Too often, only the outcomes of the carious process are treated and not the cause of the disease itself.

Dental caries involves a complex process of enamel demineralization and remineralization that occurs due to the action of organic acids produced by microorganisms within the dental plaque. Dental caries is a multifactorial disease, resulting from the interplay between environmental, behavioural and genetic factors. The four factors that influence its progression are shown in Figure 4.1. 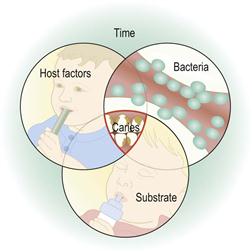 Figure 4.1 The multifactorial nature of caries involves the Host, Substrate, Bacteria and Time.

Increasingly, dental plaque is viewed as a dynamic biofilm (Figure 4.2). This implies that plaque maintains its own microenvironment and has actions that influence oral health. While the plaque biofilm is usually viewed as undesirable, the presence of a healthy biofilm may be positive, e.g. in acting as a fluoride reservoir or as a protective barrier to erosion. 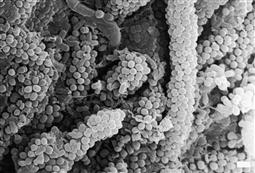 Dental plaque contains bacteria that are both acidogenic and aciduric. Although many bacterial subspecies have been shown to be associated with caries, Streptococcus mutans is still believed to be the most important bacterium in the initiation and progress of this disease in combination with lactobacilli. In the caries process, once the pH of the plaque drops below a critical level (around 5.5), it causes desaturation with respect to tooth mineral, the enamel demineralizes and there is net mineral loss. This desaturation will last for 20 min or longer, depending on the availability of fermentable substrate and the effect of the saliva, fluoride and calcium and phosphate.

Mutans streptococci (incl. S. mutans and S. sobrinus) is the major group of bacteria involved in the initiation of enamel demineralization. Normally, an infant is inoculated vertically with S. mutans by the mother/primary caregiver or horizontally by peers at a playgroup or childcare centre. The initial inoculation was thought to be dependent on the presence of a hard surface, and therefore the eruption of the first tooth, however recent research has shown the presence of this organism in newborns. In general, the earlier the detection of significant levels of mutans streptococci, the greater the caries risk of an infant. Repeated consumption of fermentable carbohydrates leads to the proportional overgrowth of mutans streptococci and other aciduric and acidogenic organisms, and the subsequent production of organic acids (lactic, formic, acetic), an increase in the extracellular polysaccharide matrix and a change in the relative components of the microflora leading to increased risk of dental caries.

The traditional triad of host factors – the teeth, the microbes and their diet – is a simplistic representation of the complex interrelationships in the oral cavity. With regard to the caries process, the quality of tooth structure and the saliva are the major host factors that should be considered. Poor tooth quality, such as hypomineralized enamel, is associated with increased rates of caries, and changes in salivary quantity and/or quality has a profound effect on the whole oral environment, affecting caries rates, oral comfort, periodontal health and resistance to infection.

The importance of saliva is often over-looked, however, it has several critical roles in the caries process. Saliva is excreted from the major and minor glands at different rates and with different constituents depending on the presence or absence of stimulatory factors. Saliva stimulated by chewing has increased calcium and phosphate ion concentrations. A gustatory effect, such as that induced by some food acids, has been shown to stimulate a higher flow rate of saliva than stimulation by mechanical chewing. By removing substrate and buffering plaque acid, saliva helps to balance the caries process and has a critical role in remineralization as it provides a stabilized supersaturated solution of calcium and phosphate ions as well as fluoride ions from extrinsic sources. The major constituent of saliva is water (~99.5%), with a wide range of other inorganic and organic components, the most relevant being the salivary proteins, especially the histatins, mucins and statherins, which provide:

• antibacterial and antifungal and antiviral activity.

Therefore, a decrease in the amount or quality of saliva can significantly increase the caries risk.

When acid challenges occur repeatedly, the eventual collapse of enough enamel crystals and subsequently rods will result in surface breakdown. This may take from months to years, depending on the intensity and frequency of the acid attack. This means that in all mouths (as most mouths will contain some cariogenic bacteria) there is continual demineralization and remineralization of enamel; therefore, an individual is never free of dental caries. The process of enamel demineralization and remineralization is constantly cycling between net loss and gain of mineral. It is only when the balance leans towards net loss that clinically identifiable signs of the process become apparent. The long-term outcome of this cycling is determined by:

• The composition and amount of plaque.

Thus the term ‘caries-free’ often used to describe a child with no visible decay is best changed to the term ‘caries-inactive’ to more accurately reflect this clinical reality. For the balance to be maintained, there should be sufficient time between cariogenic challenges for the remineralization process to take place. When these challenges become too frequent, or occur when salivary flow is reduced, the rate of demineralization and subsequent tooth breakdown will increase.

Dental enamel demineralization is a chemical process. The dissolution of hydroxyapatite can be described simply:

with enamel demineralization summarized as a net loss of enamel mineral due to the action of either intrinsic or extrinsic acids, leading to dental caries or erosion. Dental caries is primarily caused by lactic and acetic acids which diffuse through the plaque and into the enamel pores between the rods as neutral ion species, where they dissociate and decrease the pH of the fluid surrounding the enamel crystals. Once dissociated, the protons dissolve the hydroxyapatite crystal surface depending on the degree of saturation of the specific apatite and the inter-rod fluid calcium and phosphate ion concentration increases.

The buffering of calcium and phosphate at the enamel surface and in the plaque biofilm leads to the development of a subsurface (or white spot lesion) with a proportionately hypermineralized surface layer. The optical changes occur due to the increased pore spaces between the thinned rods and the effect this has on the refractive qualities of the enamel. The continuation of this process eventually undermines the support for the surface layer and surface breakdown occurs – the development of a physical cavity.

With the significant reduction in the prevalence, incidence and severity of caries in a great proportion of Western society over the past three decades, notwithstanding some disadvantaged communities and individuals who remain at high risk, the sensitivity of many diagnostic tests for caries has been reduced. Occlusal caries detection is complicated clinically by surface morphology, fluoride exposure, anatomical fissure topography and the presence of plaque and stain. The current methods used commonly for caries detection are:

The traditional use of a sharp probe or explorer in pits and fissures and on demineralized smooth surfaces may damage demineralized enamel, increasing the likelihood of progression of disease and restorative intervention. This invasive method provides little additional diagnostic information, therefore, the blunt probe should only be used to check the integrity of a smooth surface lesion or to clean the fissures gently before examination, and the criterion of ‘sticky fissure’ should be eliminated.

In the past two decades, laser and light-induced fluorescence methods have been developed to detect and quantify enamel mineral content. These methods rely on the different fluorescence characteristics (loss of fluorescence) of demineralized enamel or dentine due to the scattering of light or excitation of materials in the carious lesion. There is a strong correlation between mineral loss and fluorescence in white spot (demineralized) lesions of enamel, however these results can be confounded by stains, calculus and poor operating technique. Over-diagnosis of caries (false positive results) is the main problem.

The recent commercial development of detection systems such as Diagnodent™, QLF-D™, Canary™, Soprolife™ and CarieScan™ have the potential to increase the accuracy of detection of enamel and dentinal caries. This is because:

• Current clinical methods are limited to detecting enamel caries only at an advanced stage.

• Small changes in mineralization can be detected.

• Mineral loss can be quantified.

• Serial changes in lesion characteristics can be recorded.

The detection of approximal caries at an early stage is important in paediatric dentistry due to the large proportional size of the pulp in deciduous teeth. New detection methods, such as the Diagnodent pen, have been developed for this task, however, results of research indicate that these should only be used as adjuncts to traditional methods, such as bitewing radiographs and visual and tactile examination (Chawla et al. 2012).

Preventing, reversing or at least slowing down dental caries generally consists of altering one or more of the factors described above.

Although often given minimal attention by dental practitioners, diet is probably the single most important factor in caries risk. Although some dietary habits have changed, the overall consumption of sugar has increased over the past 50 years in most Western countries, especially related to increasing consumption of carbonated beverages. Many foods, although not obviously cariogenic, contain hidden sugars and fermentable carbohydrates. Dietary histories may be useful in identifying those children at high risk. Achieving changes in dietary habits is extremely difficult and therefore advice must be individual, practical and realistic.

• Frequency of intake is more important than overall quantity.

• ‘Grazing’ between meals should be discouraged.

• The frequent consumption of soft drinks (including fruit juices and sports drinks) should be avoided. Not only are they cariogenic but also extremely erosive and highly caloric.

• Sweets are useful rewards, but should be limited to mealtimes.