Transplantation of organs and tissues has developed rapidly alongside enormous advances in immunology, immunosuppressive therapy (Ch. 19) and medical and surgical technology. Organs and tissues currently transplanted are shown in Table 35.1. 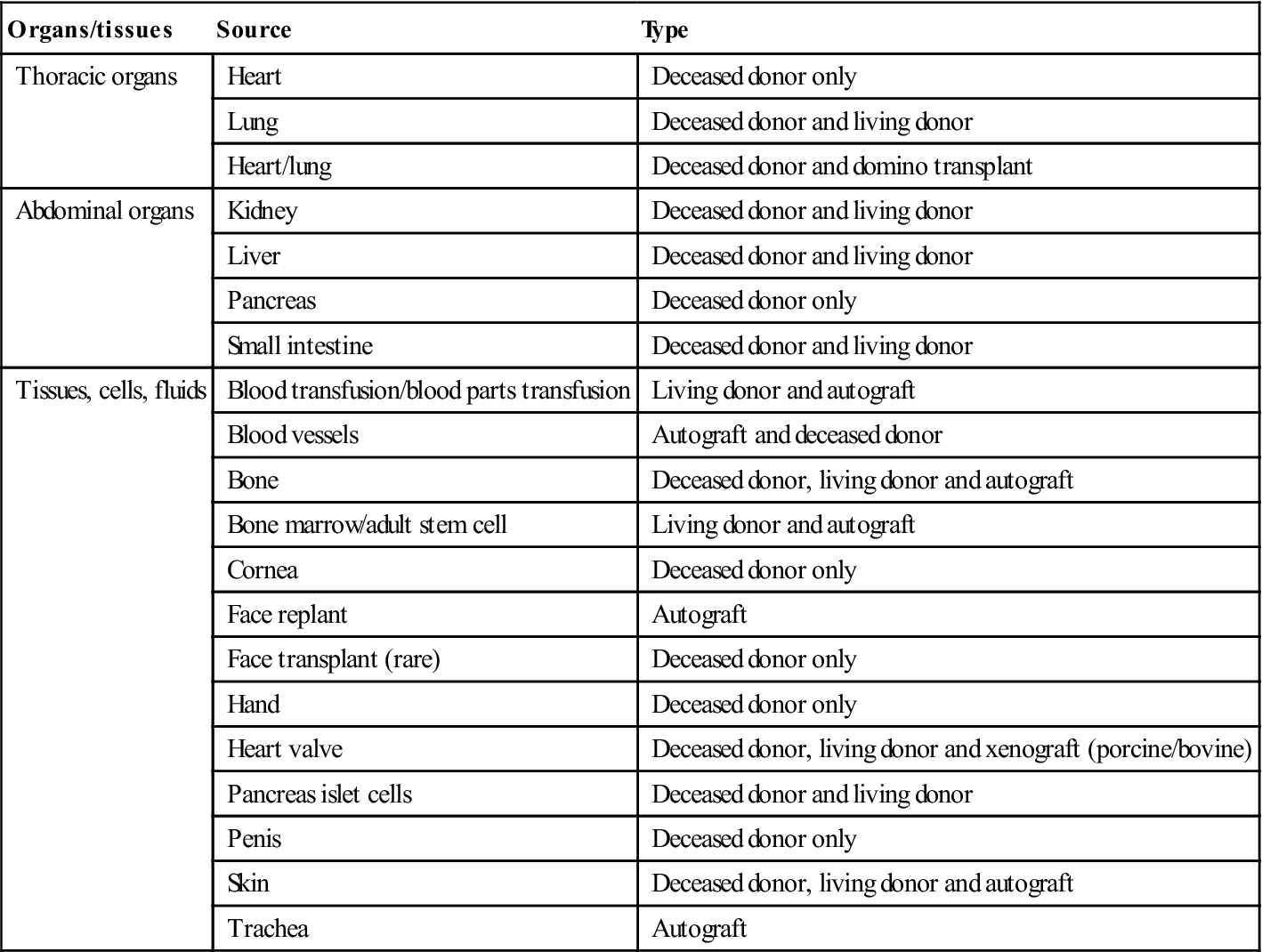 Autografts (autologous transplants) refer to cells that are collected from an individual and given back to that same person (e.g. veins used for coronary artery bypass grafting, skin used for grafts or blood). Autografts are the most common type of transplant used to treat patients with haemopoietic stem-cell transplantation (HSCT; or bone marrow transplantation [BMT]).

Allografts (allogeneic transplants) refers to cells that come from another individual, who may be a relative or not, but the donor’s blood must be closely matched to the recipient’s (more likely when the donor is a sibling).

Isografts are allografts in which organs or tissues are transplanted from a donor to a genetically identical recipient (e.g. an identical twin). Most human tissue and organ transplants are allografts that are not so closely matched, which means that the recipient needs to be immunosuppressed to prevent transplant rejection. Organ donation is crucial to provide adequate material.

HSCT is the transfer of haemopoietic stem cells from one individual to another (allogeneic HSCT), or the return of previously harvested cells to the same individual (autologous HSCT) after manipulation of the cells and/or the recipient. It developed from the infusion of bone marrow cells into patients after prior radio- or chemotherapy and is also widely employed in many neoplastic and autoimmune conditions (Fig. 35.1). Allogeneic HSCT can cure or improve outcomes in a variety of conditions, including leukaemias, lymphomas, myeloproliferative disorders, myelodysplastic syndromes, bone marrow failure syndromes, congenital immunodeficiencies, enzyme deficiencies and haemoglobinopathies.

Best transplant results are in ambulatory patients with rehabilitation potential, who have no other significant co-morbidity, a satisfactory psychosocial profile, an emotional support system and nutritional status. Transplantation may be refused by some Jehovah’s Witnesses and Orthodox Jews.

Transplants can be from live or dead (‘cadaveric’) donors, or from donors who are living but ‘brain-dead’ – a state defined by an irreversible cessation of all brain and brainstem functions; this is determined on clinical criteria during two separate examinations performed 24 hours apart, or by ancillary studies to assess brain activities. An absence of drugs, hypothermia or metabolic derangements must be confirmed. Brain death criteria are shown in Box 35.1. One of the main obstacles to transplantation is the lack of donors (Fig. 35.2).

• Known cause of condition

• No gag, cough or corneal reflexes

• No spontaneous respirations or movements

Success for different types of organ transplanted can, in some instances, approach 90% at 1 year, the major barrier to success being immunological rejection. Except for transplants between identical twins, all transplant donors and recipients are immunologically incompatible and host cells attempt to destroy or reject the transplanted organ, which, with time, can lead to graft failure or patient death. The other main cause of graft rejection is patients’ failure to continue taking their immunosuppressive drugs.

To try to avoid transplant rejection, transplant recipients and donors are tissue-typed to determine the human leukocyte antigen (HLA) class I and class II loci; the degree of incompatibility is defined by the number of antigens mismatched at each HLA locus. The degree of humoral sensitization to HLA antigens is also determined; sensitization happens when the recipient has received multiple blood transfusions from a previous organ transplant or during pregnancy. Cross-matching is an in vitro assay to determine whether a potential transplant recipient has preformed anti-HLA class I antibodies against those of the organ donor. A negative cross-match must be obtained before accepting an organ for transplantation. Transplantation of an organ into a recipient sensitized against donor class I HLA antigens puts the recipient at high risk of hyperacute antibody-mediated rejection. ABO blood group determination is used to establish whether the patient is a potential target of recipient circulating preformed cytotoxic anti-ABO antibody. Transplantation across incompatible blood groups may result in a humorally mediated hyperacute rejection.

Following transplantation, all patients need treatment with immuno-suppressive drugs for life, to prevent T-cell alloimmune rejection. These are discussed in Chapter 19.

Treatment goals are to achieve the highest rates of patient and graft survival, and to minimize toxicity, infections and malignancy. The current high graft survival rate is due to increasingly effective immunosuppression. There is no consensus as to the single best protocol, and each transplant programme uses slightly different regimens.

Induction immunosuppression immediately after transplantation is a short course of intensive treatment to almost abolish the circulating lymphoid cells critical to rejection. Induction agents are given less often if the graft functions immediately, as in recipients of living kidney donors, especially HLA-ID grafts. Maintenance immunosuppression usually uses corticosteroid-sparing agents, such as calcineurin inhibitors (e.g. ciclosporin or tacrolimus) and/or corticosteroids, sometimes along with antiproliferative agents (e.g. azathioprine, mycophenolate mofetil or rapamycin; Table 35.2), inhibitors of mechanistic target of rapamycin (mTOR; e.g. temsirolimus, everolimus, sirolimus or deforolimus), anti-T cytotoxic (anti-Tc; abatacept, belatacept) or anti-interleukin-2 (basiliximab, daclizumab) agents, or other biological therapies. Many new agents are being trialled, such as eculizumab and bortezomib for treatment of antibody-mediated rejection; these and the more commonly used immunosuppressive drugs and agents, along with their adverse effects, are discussed more fully in Chapter 19. Transplantation regimens used in children may affect the developing dentition. 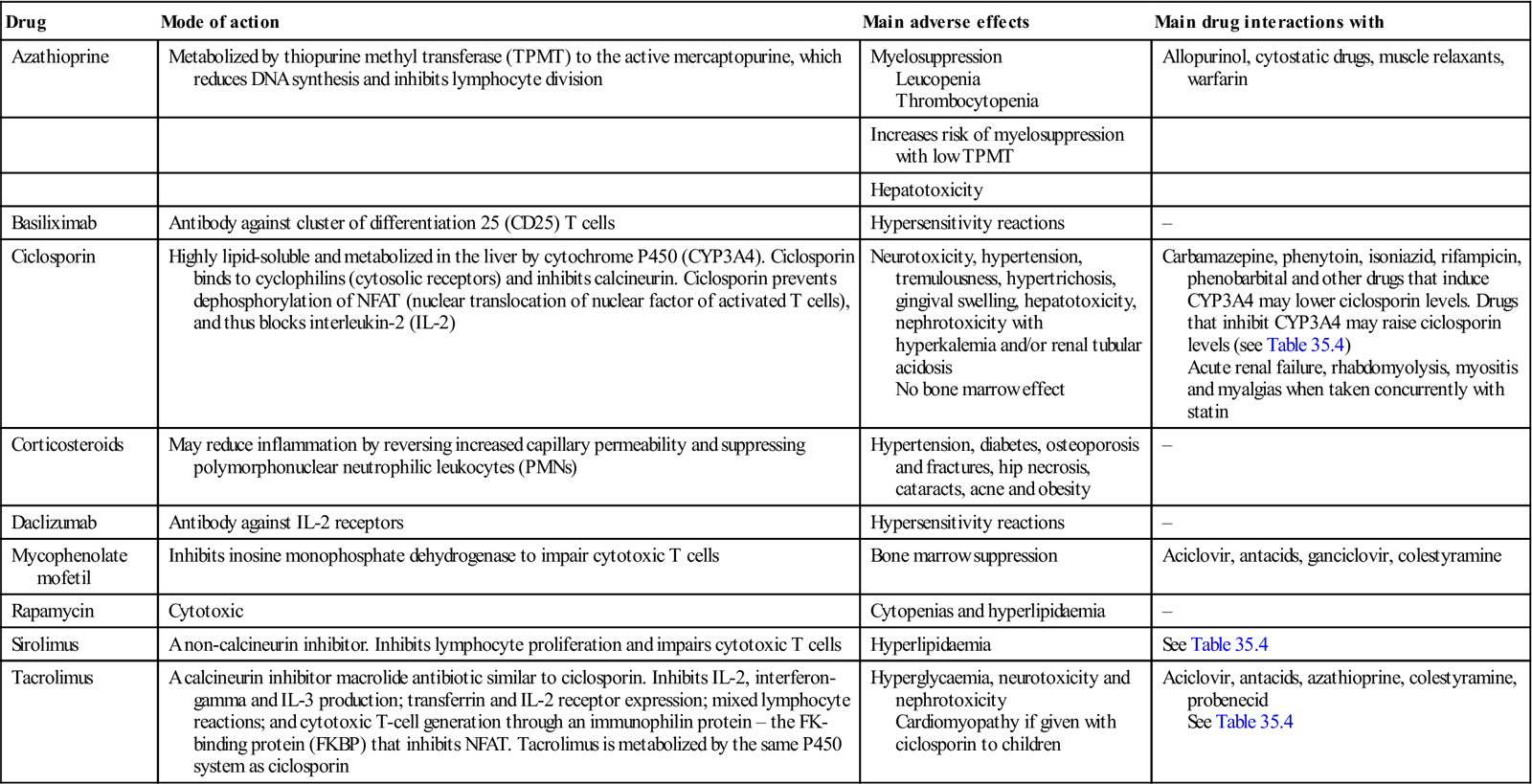 Adverse effects may include the following:

■ Ciclosporin: liver/kidney dysfunction, hypertension, bleeding tendency and poor wound healing. Gingival overgrowth incidence varies and is dependent on each patient and their drug regimen. Calcium-channel blockers may exacerbate the problem. Children tend to be more susceptible to gingival overgrowth than adults.

■ Tacrolimus: less gingival overgrowth but associated with oral ulceration and numbness or tingling, especially around the mouth.

■ Azathioprine: bone marrow suppression and related complications, such as stomatitis and opportunistic infections.

Immunosuppressive therapy is designed to suppress T-lymphocyte–mediated transplant rejection but leads to liability to infections especially with mycobacteria, fungi and viruses (Table 35.3). Infections may spread rapidly, may be opportunistic and may be clinically silent or atypical. Even mild infections can be a serious threat and, as an adjunct to anti-infective therapy, immunosuppression may need to be reduced or even stopped temporarily. Antimicrobial prophylaxis may be appropriate. Bacterial sepsis is better tolerated with ciclosporin than with azathioprine but still must be treated aggressively, as it is the most common cause of death during the first postoperative months. Legionella infections are increased in immunosuppressed patients, and often cause dyspnoea and hypoxaemia before the chest radiograph shows any significant infiltrate; a patient who develops such symptoms or a pulmonary infiltrate of unknown aetiology should be treated early with erythromycin. 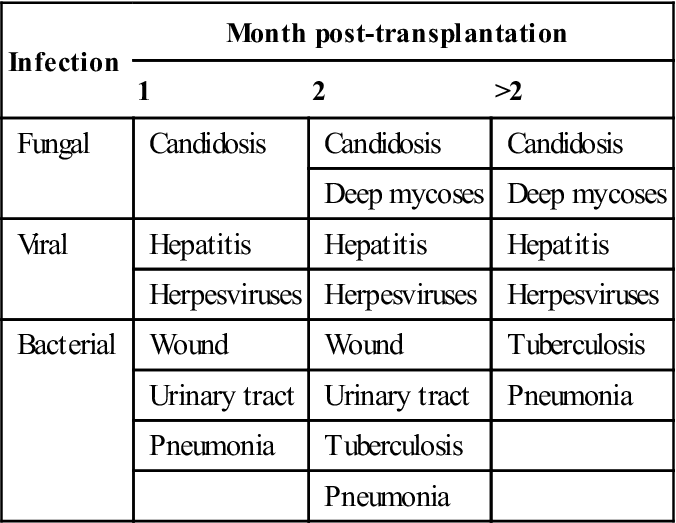 Viral infections also account for substantial morbidity and mortality. Herpes simplex virus (HSV) infections are common and usually treated with a 10–14-day course of aciclovir or famciclovir. Varicella zoster virus (VZV) infections may appear, especially herpes zoster, and should be treated with similar antivirals. Cytomegalovirus (CMV) infection is one of the other most common viral infections; it usually appears 3 weeks or more after transplantation, presenting with fever, leukopenia and malaise. The CMV status of the donor must therefore be recorded and the CMV titre assessed as part of the pre-transplant evaluation, so that the results are available immediately after transplantation. A tissue diagnosis of CMV should be sought, either by the histological findings or by biopsy cultures. Patients with systemic CMV infections are treated with ganciclovir.

Fungi commonly cause severe local or even systemically invasive infections in transplant patients, and infections in sputum, blood, urine, bile or drains are an indication for systemic antifungal therapy. Candida species are behind the most common fungal infections; as a general rule, if Candida grows from two or more sites (e.g. urine, wound), even if not from blood, the patient should be treated and managed as having systemic candidosis. Intravenous amphotericin, or fluconazole intravenously or orally, is usually used. Aspergillus niger, A. flavus or A. fumigatus infections may infect the lungs, upper respiratory tract, skin, soft tissues or central nervous system (CNS), most frequently causing diffuse pneumonia with patchy infiltrates. Amphotericin should be initiated; a long course of systemic therapy is indicated. Development of a brain abscess is insidious and cure rare. Cryptococcus neoformans infections may cause pulmonary, CNS and disseminated disease, diagnosed by examination of the cerebrospinal fluid (CSF; lumbar puncture), staining with traditional India ink stains and testing for CSF cryptococcal antigen. Systemic amphotericin treatment is indicated. Mucor and Rhizopus infections (phycomycoses) are rare but can cause destructive CNS or soft-tissue infections. Treatment includes local excision and a long course of systemic amphotericin. Pneumocystis infections are frequently found, and a patient who develops a pulmonary infiltrate of unknown aetiology should be treated early with co-trimoxazole for Pneumocystis infections; these commonly cause dyspnoea and hypoxaemia before chest radiography shows any significant infiltrate.

Transplant recipients are at increased risk from some malignant neoplasms – including melanoma, basal/>