WHAT ARE FUNCTIONAL APPLIANCES?

Functional appliances are removable or fixed orthodontic appliances that aim to utilise, eliminate or guide the forces arising from muscle function, tooth eruption and growth in order to alter skeletal and dental relationships. This chapter will be limited to the use of functional appliances in the treatment of Class II malocclusions. Without such treatment, most Class II cases remain unchanged or deteriorate. For example, among untreated pre-pubertal children with Class II malocclusion taking part in a randomised controlled clinical trial, only about one-third showed an improved sagittal jaw base relationship, as assessed by annual change in ANB angle; the relationship was unchanged in about half and worsened in one out of six children.1

The term ‘functional appliance’ is so named, because it was initially believed that altering muscle function can cause a change in growth response. Devices such as the fixed inclined anterior bite plane, posterior inclined planes attached to bands cemented onto posterior teeth and the original fixed functional appliance (Herbst appliance, Figure 35.1)2 were described in a textbook 100 years ago.2 In 1902, the monobloc appliance was devised to posture the mandible forward in babies born with severely retrognathic mandibles that compromised their airway. In the 1920s, Andresen used the same principle of posturing the mandible forward to treat malocclusions with his activator appliance.3 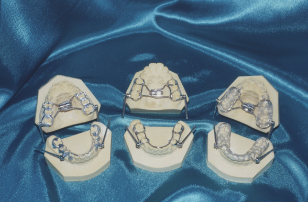 INDICATIONS AND DESIGNS OF FUNCTIONAL APPLIANCES

In general, it is considered better to start functional appliance therapy in the late mixed dentition or early permanent dentition, as doing so will allow patients to progress to the second-phase treatment with a fixed appliance. This approach will also require less adjustment of the removable functional appliance so as to allow tooth exfoliation and eruption of the permanent teeth. In contrast, fixed functional appliances, such as the Herbst appliance, are usually used in the permanent dentition because the splint is cemented to the teeth. The Herbst appliance is primarily used during adolescence, but it can also be used in adults and has been demonstrated to be a valid alternative to surgical advancement of the mandible in adults with moderate mandibular retrognathism.4 Nevertheless, early treatment with functional appliances to improve self-esteem is particularly important for patients who are being teased because their teeth are ‘sticking out’.

There are multiple c/>