21 Impacted teeth and their orthodontic management

Impacted teeth and their orthodontic management

When we look at the intraoral photographs of an untreated malocclusion of a patient under our care, we can often identify the patient by name, because of features of the malocclusion peculiar to that patient. We see erupted teeth in malalignment, we know the perfect result we wish to emulate and the movements needed to attain this – the rotations, uprighting and torque that will be necessary – and we plan the biomechanics accordingly. By contrast, looking at the post-treatment intraoral photographs of a finished case, ‘it could be anybody’! The precision with which we are able to treat these cases, with a high degree of predictability and level of excellence, is the envy of the dental and medical professions. Nevertheless, when it comes to the treatment of impacted teeth, that is another story – our professional confidence receives a nasty jolt. The reason for this is that several additional factors become involved when treating impacted teeth, factors over which we may not have total control and which do not need to be considered in routine orthodontics. To find out why, we need to start from basic principles.

Teeth of the permanent series normally erupt when their root development is approximately two thirds of its final length,1 with the apical third completing 2.5–3 years later.2 It is during this time period that the eruptive potential of the tooth is at its greatest. This innate eruptive force is reduced when less than half the root is developed and similarly when the root apex has been completed. Nevertheless, when deeply carious deciduous molar teeth are extracted before their due time, particularly when bone-destroying periapical lesions are present, the permanent successors will often erupt prematurely, with relatively underdeveloped roots. A permanent tooth which remains unerupted when its root has developed beyond two thirds of its final length might be labelled as having delayed eruption, in contrast with an impacted tooth, which may be defined as a similarly developed tooth which is not expected to erupt in a reasonable time.3 It is this latter category of teeth which will be discussed in this chapter.

The tooth most frequently impacted is the mandibular third molar, and its treatment usually involves extraction, although there is a small but significant number of cases in which a conservative, orthodontic resolution of the impaction may be wholly worthwhile.

Impaction of the maxillary canine may be a distant second in terms of frequency but, because of its location, it is the most important tooth to be affected, with potentially serious implications in terms of damage to the roots of adjacent teeth and difficulty in orthodontic and surgical resolution of the problem. However, its existence may be a chance finding in a routine visit to the dentist since, with an over-retained deciduous canine in place, appearance may not be adversely affected and detection of the condition can be missed. It is variously described as occurring in 1–2% of a given population,4,5 with females affected more than twice as frequently as males6,7 and Oriental populations less vulnerable than those from the West.8

Maxillary central incisor impaction is less prevalent, but its abnormal presentation is the most obvious symptom and is the likely reason that parents will bring a high proportion of these children to the dentist, most frequently at the age of 8–9 years. Other teeth do become impacted from time to time, but these are largely due to local conditions which are not necessarily specific to one tooth type or another. There are also general conditions and syndromes that cause multiple impactions in an individual and which are beyond the scope of this work. The reader is referred to a comprehensive text on the various aspects relating to the treatment of impacted teeth.3

The first diagnostic steps to be taken in any orthodontic case should always include a history, specifically a record of trauma that may have occurred in the recent or in the distant past. This should be followed by a careful clinical examination. The key for suspecting the existence and discovering the location of impacted teeth lies in the search for incongruities. A young person may have a single deciduous tooth, retained well over its normal shedding time, when all other deciduous teeth have shed and their successional teeth are fully erupted. A single, erupted, permanent tooth may have an unusual orientation of its long axis, with the root displaced mesiodistally and/or buccolingually and for no obvious reason. An unerupted central incisor may be palpable labially, if displaced by a supernumerary tooth or odontome, or very high in the labial sulcus if it is dilacerated. An unerupted canine may be palpable on the buccal side of the ridge or in the palate, behind the incisors, depending on its location. Certain anomalies are often associated with impacted canines, notably small teeth, spaced dentitions, anomalous lateral incisors and several other associated phenomena.9

In order to gather more evidence, it becomes necessary to commission a simple radiographic examination. This should always begin with one or more periapical views, from which two basic questions need to be answered. 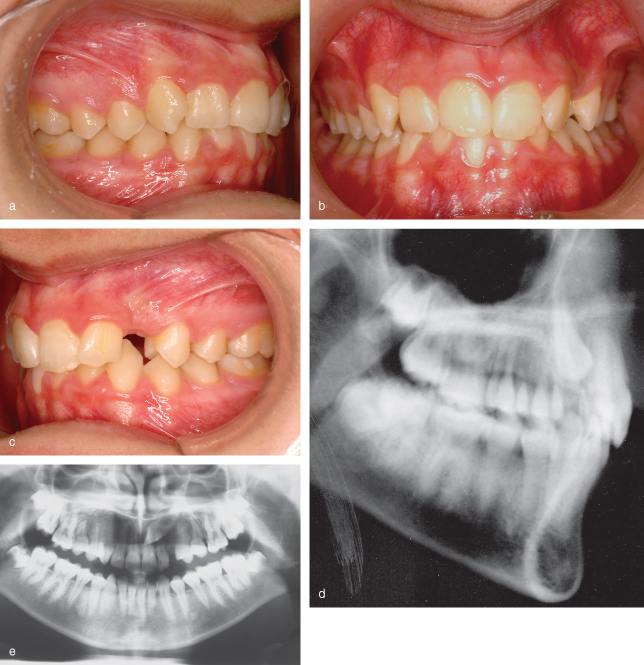 In some situations, information regarding the locale of an impacted tooth in the buccolingual plane, using plane film radiography alone, may be insufficient. An unerupted labial or palatal maxillary canine will have to have caused severe, oblique resorption of the labial or palatal surface of the root of the lateral incisor before it will be discovered on any of these films. The lesion will only become visible when the resorption has reached the advanced stage where it actually causes alteration in the continuity of the mesial or distal profile of the root anatomy. Furthermore, buccolingual proximity of the two adjacent teeth will be impossible to assess and this has orthodontic implications insofar as it affects the direction that traction must be applied to avoid a collision course with the adjacent root. It also has surgical implications, since the surgeon must expose the tooth from an appropriate aspect to minimise tissue trauma and to avoid damaging neighbouring teeth.

So, when more information is needed to achieve comprehensive success in the overall treatment endeavour, more sophisticated diagnostic measures need to be used. Computed tomography (CT) has been used in medicine for several decades and, while its efficacy in the present context is obvious, the level of ionising radiation that it emits is too high to justify its use on a routine basis, in this context. Over the past few years, however, with the introduction of cone-beam volumetric CT, excellent resolution and all the advantages of the traditional spiral CT has been gained, while reducing the radiation dosage by around 90%, to within the same range as that for panoramic and lateral skull films. From a single revolution of the beam around the patient’s head, cone-beam CT is able to provide parallel ‘slices’ in any direction and at varying intervals and views of the surface of the bony anatomy. Added contrast can ‘strip’ away the bone from the picture to leave only teeth in their three-dimensional inter-relationships and, with some cone-beam CT machines, this can be animated into a video film rotating the head in any direction. Guesswork is eliminated and replaced with accurate positional diagnosis while, at the same time, displaying root resorption on any surface, with great clarity.11,12

Following confirmation of the exact location of the impacted tooth and its relationship to the other teeth, a definitive strategy for directional traction needs to be planned, aimed at bringing the tooth into the arch. But first, a full case analysis must be undertaken, in which resolution of the impaction is just one part of the treatment as a whole. In general, appliance therapy begins with levelling and alignment of the teeth and space is created at the appropriate site in the arch (see Figure 21.2 below). A majority of impacted teeth are situated close to the line of the arch and will often improve their positions spontaneously during the space opening procedure. Some may even erupt unaided and, in the case of impacte/>