Orthodontic treatment can be associated with a number of iatrogenic changes including decalcification, periodontal problems and root resorption. Orthodontically induced inflammatory root resorption (OIIRR) is a common unavoidable adverse effect of treatment which is the focus of this chapter. It is a pathological process that results in a loss of substance from mineralised cementum and dentine1,2 (Figure 13.1) due to the removal of hyalinised tissue during orthodontic tooth movement.3,4 Fortunately, a reparative process in the periodontium commences when the applied orthodontic force is discontinued or reduced below a certain level.5,6 This healing process can occur as early as the first week of retention following orthodontic treatment and increases over time.7–9 There are biological and mechanical factors that influence the severity of OIIRR. Mechanical causative factors can be controlled by the clinician to minimise the adverse effect of OIIRR and allow initiation of repair. 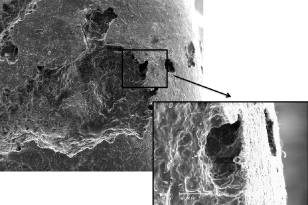 INCIDENCE, DISTRIBUTION AND SEVERITY OF OIIRR

Generally, the distribution of root resorption is dictated by the pressure zone created by different types of tooth movement. Therefore, for tipping movement, it is usually found in the marginal and apical parts of the tooth.12 OIIRR tends to occur preferentially in the apical region because (Figure 13.2):

Figure 13.2 Majority of orthodontic movements are not translatory but tipping in nature, therefore, root resorption occurs at the apical part of the tooth root. 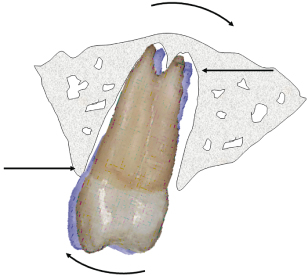 There are three levels of OIIRR severity:16

1. Cemental or surface resorption with remodelling

Significant resorption of the root apex results in root shortening with no evidence of regeneration. However, with time, the sharp edges formed by resorption craters may be levelled. Surface reparation only occurs in the cemental layer.

Radiographs have been widely used to clinically diagnose OIIRR. The dental panoramic tomograph (DPT) provides an overall view of the dentition with a lower radiation dose than a full-mouth series of intraoral radiographs.17 However, due to the narrowness of the focal trough, the apices and palatal structures can be out of focus in the incisor region. Therefore, additional radiographs such as periapical radiographs or occlusographs may be needed to supplement the DPT. Sameshima and Asgarifar18 compared periapical radiographs with DPTs and found the amount of root resorption was exaggerated by 20% or more on a DPT. The paralleling technique for periapical radiography is preferable as it provides a geometrically accurate image, and, together with the use of a film holder and aiming device, radiographs can be standardised at two different time points. The two-dimensional nature of radiography limits its accuracy because buccal and lingual root defects are not detectable.19 With the advance of technology, cone-beam computed tomography will be more readily used in future root resorption studies. It will provide a more accurate three-dimensional image with a lower dosage of radiation, which can be used for qualitative and quantitative assessment.

Orthodontic tooth movement is associated with local over-compression of the periodontal ligament (PDL), which results in hyalinisation. Resorption of the cementum occurs simultaneously with the removal of hyalinised tissue.5,20–22 Resorption starts at the periphery of the hyalinised periodontal membrane and is followed by resorption of surrounding root and bone surfaces4,23 and invasion of blood vessels.24 The resorption process propagates until no hyalinised tissue is present and/or the force level diminishes. The resorption crater expands the root surfaces involved and thereby indirectly decreases the pressure exerted through force application. Decompression alters the process to reverse and cementum reparative process begins. It has also been documented that OIIRR initiated 10–20 days after force onset12,21,25 continued even during extended retention periods of up to 1 year.7,8,26 The resorbing areas on a root surface may show signs of concurrent active resorption and repair.7,12 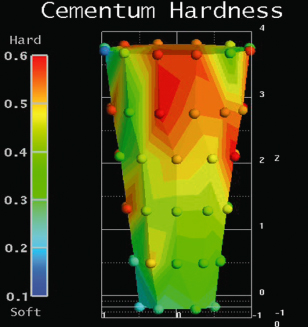 FACTORS INFLUENCING THE DEGREE OF OIIRR

Root resorption can occur in individuals without orthodontic treatment and is related to one’s tissue response and metabolic activity. The metabolic signals (e.g. hormones, body type and metabolic rate) influence the relationship between osteoblastic and osteoclastic activity which modifies cell metabolism, an individual’s reaction pattern to disease, trauma and ageing.5 Root resorption can vary among individuals and within the same person at different times.

Genetic influence on the susceptibility to root resorption remains controversial. Previously, a sib-pair model was used to investigate the genetic influence on root resorption and reported 70% heritability for resorption of maxillary incisor roots and the mesial and distal roots of the mandibular first molars. This accounted for approximately half of the total phenotypic variation.31 This meant that siblings experienced similar levels of OIIRR. A further study also revealed a familial association of OIIRR.32

Ethnicity can also influence the susceptibility to OIIRR. Sameshima and Sinclair34 have found that Caucasians and Hispanics are more prone to OIIRR than people from the Far East.

The ageing process results in changes to the hard and soft tissues of the dentoalveolus. The PDL becomes less vascular, aplastic and narrow with age. The bone becomes more dense, avascular and aplastic and the thickness of cementum increases.6 Mirabella and Artun62 evaluated a large sample of adult patients for investigating the prevalence and severity of OIIRR in maxillary anterior teeth. Forty percent of the adults had one or more teeth with ≥2.5 mm resorption. This indicated that the sample of adults had a higher mean value of severely resorbed teeth per patient than the comparable group of adolescents which was 16.5%.63 On the other hand, Harris and Baker64 reported that 61% of adult patients had some degree of root resorption after orthodontic treatment, which was not significantly different from the 58% of adolescent patients experiencing root resorption in that same study.

Partially formed roots have been found to develop normally during orthodontic treatment and it has been suggested that teeth with open apices may be more resistant to OIIRR.63,65–67 Linge and Linge63 found less resorption in patients treated before the age of 11. They suggested that resorption could be avoided if tooth movement was completed before the roots were fully developed, before the age of 11.5 years, but treatment at this age may not be suitable for many patients.

A number of habits have been reported to result in an increased risk of OIIRR. Finger sucking beyond the age of 7 years has been suggested to be a risk factor.63 Nail biting,68 forward tongue pressure and tongue thrust63,69 have also been proposed to be linked to OIIRR. Long-term orthopaedic tongue thrusting forces that result in anterior open bite may promote root resorption,70 particularly when vertical elastics are used in an attempt to close open bites associated with tongue problems.

Orthodontic tooth movement of a severely traumatised tooth may result in increased resorption.63,67,71–73 Linge and Linge67 found that teeth which had previously experienced trauma had an average loss of root structure after orthodontic movement of 1.07 mm compared with a loss of 0.64 mm in untraumatised teeth. However, Kjaer74 proposed that teeth with slight or moderate injuries may not have any greater tendency towards OIIRR than uninjured teeth. Malmgren72 suggested a waiting period of 1 year after a traumatic incident before the initiation of orthodontic tooth movement.

Kaley and Phillips75 identified the risk of root resorption was 20 times greater when upper incisors were in close proximity to cortical plate. On the contrary, Otis et al.76 found that the amount of alveolar bone present around the root, the thickness of cortical bone, the density of trabecular network and fractal measurements on the bony trabeculae had no significant correlation with the amount of root resorption.

Harris and Butler70 demonstrated that open bite patients experienced significantly greater degrees of root resorption. It was believed that the orthopaedic forces of tongue thrusting generated the same physiological responses as mechanotherapy intended to torque or intrude a tooth. This study also suggested that:

A hypofunctional periodontium results in a narrowed periodontal space and derangement of functional fibres, which eliminates the normal cushioning effect of the PDL,79 thus resulting in a high concentration of force. This leads to stimulation of inflammation by the promotion of inflammatory mediators secreted from local cells to induce destruction of tooth and bone.80 Sringkarnboriboon et al.81 found that the amount of root resorption was significantly greater in teeth with a hypofunctional periodontium than in those with a normal periodontium, which suggested that orthodontic movement of non-occluding teeth should be performed with caution.

The tendency of OIIRR was found to be greater in teeth with aberrant shaped roots.34,74,90–92 Sameshima and Sinclair,34 in a comparative study using radiographs taken before and after orthodontic treatment, reported that teeth with abnormal root morphology, for example, pipette-shaped, pointed, dilacerated and slender roots, frequently showed OIIRR when compared with teeth with a normal root shape.

Root Resorption Prior to Orthodontic Treatment

Patients with pre-existing evidence of root resorption have been found to be at greater risk of developing further severe OIIRR with treatment.70,94