The straight wire appliance, also termed the pre-adjusted edgewise appliance, was originally described by Larry Andrews in 1976.1 Over the following three decades this system revolutionised fixed orthodontic appliance treatment, due to the detail of design in the brackets and the associated reduction in archwire bending required by the orthodontist. The appliance is termed the straight wire appliance because of the minimal amount of archwire bending required. The angle at which the bracket slot is cut and the thickness of the bracket base determine the final tooth position.

The origins of fixed orthodontic appliance treatment date back to the turn of the 20th century with Edward Angle’s appliance systems.2 The original system went through several modifications culminating in the production of the edgewise appliance in 1928 (Table 31.1). Previous attempts at pre-adjusted systems have been described3,4 and while these systems showed developments in bracket design with aspects of pre-programming, complexities associated with their use prevented their widespread uptake. A classification of fixed appliance systems is outlined in Table 31.2.

The brackets used in fixed orthodontic appliances are usually composed of a base that fits onto the tooth surface, a slot on the outer surface into which the archwire fits, and some form of retaining item or tie-wing to allow the archwire to be held securely within the slot (Figure 31.1). The dimension of the bracket slot can vary depending on the appliance system used, however the majority of systems fall into either 0.018 inch or 0.022 inch slot sizes. These figures relate to the vertical height of the slot in thousandths of an inch, and the normal depth of these slots would be 0.025 inch or 0.028 inch, respectively. The 0.022 inch slot is the most commonly used worldwide and has the advantage that larger sized archwires can be used, which improves the control of tooth movement. 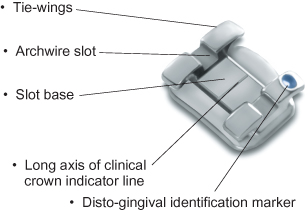 The forerunner to the straight wire appliance, the non-programmed standard edgewise fixed appliance system is designed to use identical or ‘standard’ brackets on each tooth. This then requires bending of the archwire in three planes of space when orthodontically aligning teeth with the bends determining the final tooth position. Andrews’ concerns in relation to this system centred around the time required to bend the respective archwires, as well as the difficulties faced in establishing an ideal occlusion at the end of appliance treatment. With the latter in mind, Andrews analysed study models of non-orthodontic ideal occlusions to ascertain any specific occlusal relationships present on these study models which should be accurately replicated at the completion of active orthodontic treatment. From the 120 non-orthodontic cases Andrews’ analysed, he formulated the six keys to normal occlusion, which he published in 1972:5

To clarify how these untreated ideal occlusions differed from post-orthodontic treatment cases, Andrews analysed the models of 1150 post-treatment cases in the late 1960s. He concluded that if dental or skeletal relationships vary significantly from the norm or ‘central tendency’, one or more of these six keys may not be met even with the greatest clinical proficiency. Andrew’s speculated that based on a normal distribution no more than 5% of patients would fall outside this population norm, however, this is quite a conservative estimate with the figure being nearer 20%. It should also be borne in mind that iatrogenic factors such as inaccurate bracket placement by the orthodontist, inappropriate treatment planning and mechanics, and poor patient compliance may prevent achievement of an ideal occlusion.

The advantages and disadvantages of this appliance system are listed in Table 31.3. There are three features that characterise the Andrew’s straight wire appliance: