Wound infection is a possible complication during or following any surgical procedure. The same principle is valid for all endodontic procedures. In addition, infections may occur later as well, owing to the presence of bacteria in the oral cavity.

Restorations with margins that prevent bacterial ingress are desirable, but this clinical goal remains difficult to achieve. Periradicular periodontitis may occur after root canal therapy if micro-organisms invade the root canal system. This is a major cause of failure following root canal treatment (Ray and Trope, 1985).

The American Endodontic Association defines coronal leakage as the entry of oral fluid and microorganisms into the gap between a restoration and hard substance of the tooth. In vitro studies have demonstrated that microorganisms and their toxins can penetrate endodontically treated root canals in as little as 6 weeks (Swanson and Madison, 1987).

The term apical leakage refers to the seepage of tissue fluids from the periapical region into instrumented and filled root canals. These tissue fluids provide nutrition for any micro organisms not removed during root canal preparation and filling, enabling them to survive in the root canals. 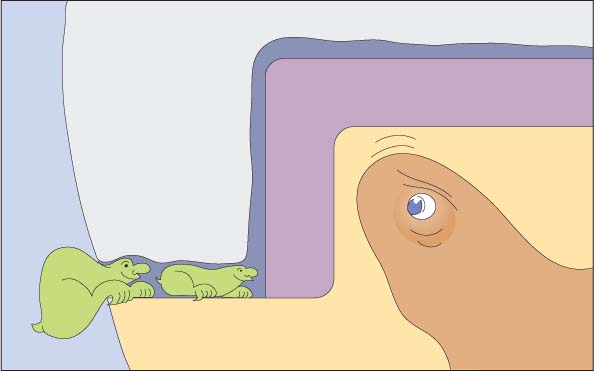 Schematic diagram of coronal leakage in the margin of a restoration in a tooth with a vital pulp. Pulp tissues can inhibit the entry of microorganisms by the externally directed flow of dentinal fluid and by specific i mmune host defense reactions. However, after root canal treatment, microorganisms may advance un-inhibited into the root canal system. 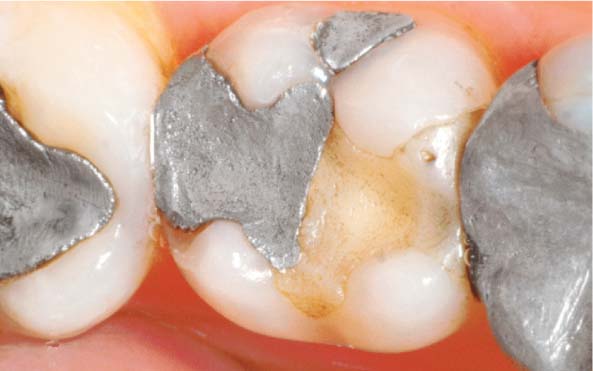 Typical clinical view of a molar with a large amalgam restoration, subsequently “repaired” with a composite restoration. Poorly sealed and/or open margins in such inadequate restorations often lead to pulpal inflammation.

Microleakage can occur in any endodontically treated root canal. Because of the larger size of posterior restorations and the higher masticatory forces in this region, multirooted teeth are more often affected than single rooted teeth (Saunders and Saunders, 1990).

The quality of both the coronal restoration and the root canal filling influence the occurrence of leakage. Inadequately instrumented canals provide niches for survival and recolonization of the remaining bacteria.

Poorly adapted temporary, or poorly fitted definitive, crowns also increase the likelihood of microleakage. The same is true for inadequate temporary restorations. Current thinking is that the interval between completion of root canal therapy and placement of the definitive restoration should be as short as possible to minimize the possibility of microleakage.

Controversy exists in some circles regarding the recommended removal of the smear layer following root canal preparation. However, it seems certain that the presence of a smear layer not only inhibits root canal disinfection but also promotes the occurrence of leakage.