The aim of this chapter is to describe modern panoramic x-ray equipment, in particular those design features that improve safety and image quality.

The panoramic radiograph has several advantages over intraoral imaging. It is quicker and easier to perform than a set of full-mouth periapical views, and because all teeth and supporting structures are shown on one film it has an ancillary use for patient education.

There used to be a dose advantage in using a panoramic view over a set of full-mouth periapical views. However, using modern intraoral equipment and techniques this may no longer be the case. In addition, the resolution of the panoramic image is lower than obtained by intraoral imaging. The indications for panoramic imaging are limited to those situations where intraoral imaging is not practicable or realistic. This makes it ideally suited to the evaluation of large intrabony lesions, impacted third molars, the assessment of bony trauma and assessment of the bony parts of the temporomandibular joints.

In the general practice setting, panoramic radiography should not be used as a screening tool for new patients, as the prevalence of significant asymptomatic disease is low. The following indications for panoramic imaging are taken from Selection Criteria for Dental Radiography, a document published by the Faculty of General Dental Practitioners (UK):

A typical panoramic machine and its components are shown in Fig 3-1. 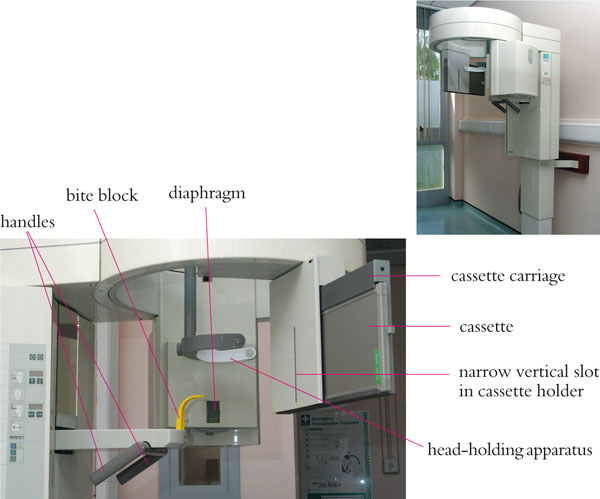 Fig 3-1 An example of a panoramic machine, with the main components labelled. 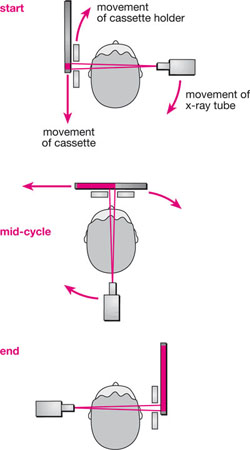 Fig 3-2 Diagram showing the movements of the x-ray tube, cassette holder and cassette during a panoramic exposure. (Based on a diagram provided by Mr E Whaites).

The x-ray beam passes through the structures in the focal layer at the same speed as the cassette passes behind the slot in the cassette holder, ensuring those structures are sharply defined. The focal layer reflects the shape of the jaws in an “average patient”, but it varies in shape depending on manufacturer. The thickness of the layer also varies; being narrower anteriorly than it is posteriorly. Some units use a continuously moving centre of rotation to produce the U-shaped focal layer (Fig 3-3). It should also be appreciated that the focal layer is three dimensional, with the height of the layer being determined by the height of the slit-shaped beam. 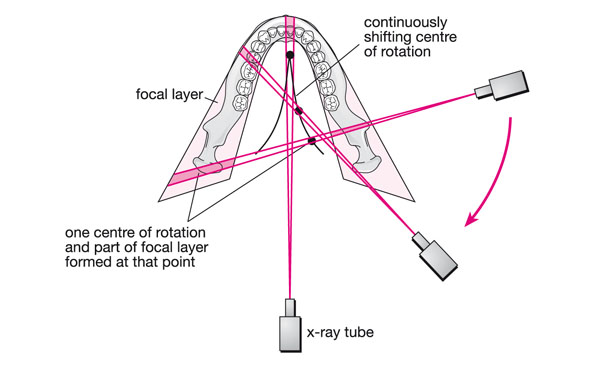 Fig 3-3 Some machines use a continuously moving centre of rotation to produce the curved focal layer similar in shape to the “average jaws”. This diagram shows three stages in this movement, the position of the x-ray tube and direction of the x-ray beam at these times, and the part of the image formed at these stages.

The image is built up sequentially as the apparatus rotates about the patient, with an exposure time of 12–20 seconds for an adult. It is vitally important that the patient remains motionless during the exposure, to prevent movement artefacts on the image.