The aim of this chapter is to describe modern intraoral x-ray equipment, in particular those design features that improve safety and image quality.

The reader should be able to:

Components of an Intraoral X-ray Set

Various components make up an intraoral dental x-ray set, the functions of which are shown in Table 2-1. A typical intraoral set is shown in Fig 2-1. 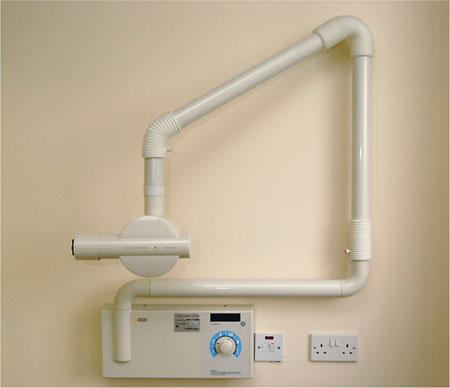 Fig 2-1 An example of a modern intraoral x-ray set.

The x-ray tube is composed of an evacuated glass tube containing a cathode (tungsten filament) and an anode (tungsten target set into a copper stem). A low current, typically around 7 mA, is passed through the tungsten filament, producing a cloud of electrons by thermionic emission. A focusing cup surrounding the filament keeps the electrons near to the filament. The electrons are then accelerated towards the tungsten target by the high potential difference (60–70 kV) between the cathode and the anode. The electrons are travelling fast when they strike the focal spot in the target and rapidly lose their kinetic energy in the form of heat and x-ray photons. The heat is conducted away from the tungsten target by the copper stem and is further dissipated by the surrounding oil. The x-ray photons pass through the thin glass tube. The components of the x-ray tube are shown in Fig 2-2. 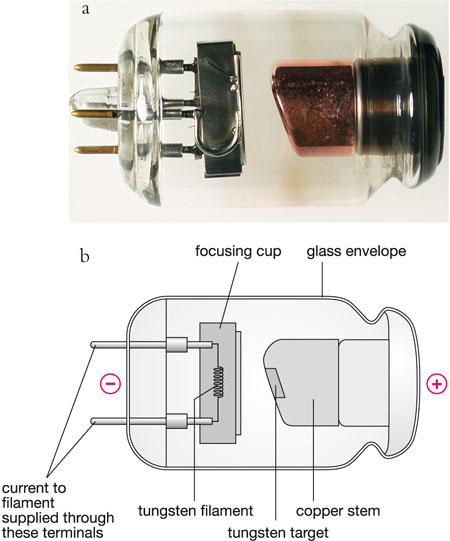 In the UK, intraoral dental x-ray sets are designed and constructed so that they comply with British Standards and meet the safety and performance standards set out in the Medical Devices Regulations 1994. In the USA, all x-ray machines have to comply with performance standards set out by the Food and Drug Administration in 1995. Similar regulations are found in other countries.

Although the dose from one intraoral exposure is low, intraoral radiography is one of the commonest x-ray investigations undertaken in both the UK and USA. Therefore, the principle of “optimisation” should be followed at all times – keeping the radiation dose as low as reasonably practicable. Modern intraoral equipment incorporates many dose saving design features, the requirements for which include the following:

The kilovoltage refers to the potential difference applied across the x-ray tube. Strictly speaking, the term “kVp” (peak kilovoltage) should be used as this reminds us that the stated kilovoltage is that achieved at the peak of the alternating potential provided by the mains electrical supply. For simplicity, this book uses the term “kV”. If a high kV is selected, the electrons in the x-ray tube are accelerated more and will be travelling more rapidly when they hit the target. The interaction of these electrons with the tungsten target will produce higher energy x-ray photons. Higher energy photons have shorter wavelength and are more penetrating. Therefore, these photons are less likely to get absorbed, decreasing the skin dose. A kV of between 60 and 70 kV is generally recommended.

The mains voltage follows a similar waveform to the current (Fig 2-3). Only the positive half of the cycle is useful in producing x-rays. Rectification circuits ensure a positive kV is always applied across the tube.