There is an ageing population in the Western world and the projection is that, by 2025, more than 50% of the population will be over the age of 50. Despite developments in oral hygiene, it is likely that many of these people will require full or partial dentures to replace missing teeth. At present, some 32 million North Americans wear full or partial dentures and the number of dentures prescribed annually runs at 9 million full dentures and 4.5 million partial dentures. For these patients, it is important that they are provided with an attractive, highly functional denture, as this will have a very positive influence on their quality of life.

The construction of a denture involves many steps. The first step is taking an impression, which is then followed by the various laboratory stages. These include producing a model, setting the teeth, preparing a waxed model, investing in a denture flask and boiling out the wax, which then leaves a space to be filled by the denture base material.

Various materials have been used to construct dentures, including cellulose products, phenol-formaldehyde, vinyl resins and vulcanite. However, they have suffered from a variety of problems:

• Cellulose products suffered from warpage in the mouth, and from a taste of camphor due to its use as a plasticizer. This camphor leached out of the denture, causing blistering, staining and loss of colour within a few months.
• Phenol-formaldehyde (bakelite) proved to be too difficult to process and also lost its colour in the mouth.
• Vinyl resins were found to have a low resistance to fracture, and failures were common, possibly due to fatigue.
• Vulcanite was the first material to be used for the mass production of dentures, but its aesthetic qualities are not very good and it has now been replaced by acrylic resins.

Acrylic resin (poly methyl methacrylate) is now the material of choice; it has the required aesthetic quality, and is cheap and easy to process. Even so, it is not ideal in all respects. The ideal properties of a denture base material are shown in Table 3.2.1.

Criteria for an ideal denture base material 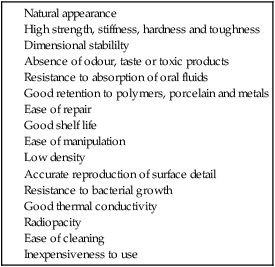 Acrylic resins are popular because they meet many of the criteria set out in Table 3.2.1. In particular, dentures made from acrylic resin are easy to process using inexpensive techniques, and are aesthetically pleasing. Besides its use in the construction of full dentures, the material is also used for a wide range of other applications such as the construction of customized trays for impression taking, the soft-tissue replication on cast metal frameworks, denture repairs, soft liners and denture teeth.

Composition and structure of acrylic resin

where Me stands for CH3. The conversion of the monomer into a polymer involves the normal sequence of activation, initiation, propagation and termination, as described in Chapter 1.5. The resins are available in either heat-cured or cold-cured forms.

These materials consist of a powder and a liquid, which, on mixing and subsequent heating, form a rigid solid. The constituents of the powder and liquid are shown in Table 3.2.2.

Constituents of a heat-cured resin 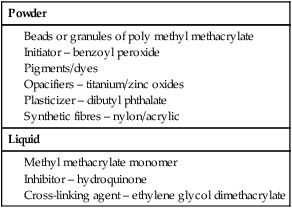 The reasons for the particular formulation of a powder–liquid system are threefold:

• Processing is possible by the dough technique.
• Polymerization shrinkage is minimized.
• The heat of the reaction is reduced.

The dough technique helps to make the processing of dentures a relatively straightforward process. A flask containing the teeth set in plaster is packed with the dough and then closed under pressure such that the excess dough is squeezed out. In addition, by adapting the dough to the model and trimming off any excess, cold-cure varieties of the acrylics are easily manipulated (when in the doughy stage) to produce special trays. Granules dissolve more readily in the monomer than beads and hence reduce the time taken to reach the doughy stage.

The polymerization shrinkage is reduced when compared to using a monomer because most of the material that is being used (i.e. the beads or granules) has already been polymerized.

The polymerization reaction is highly exothermic, as a considerable amount of heat energy (80 kJ/mol) is released in reducing the C=C to -C-C- bonds. Since a large proportion of the mixture is already in the form of a polymer, the potential for overheating is reduced. As the maximum temperature reached will be less, so the amount of thermal contraction will also be reduced.

The monomer is extremely volatile and highly flammable, so the container must be kept sealed at all times and must be kept away from naked flames. The container is a dark glass bottle, which extends the shelf life of the monomer by avoiding spontaneous polymerization from the action of light.

Hydroquinone also extends the shelf life of the monomer by reacting rapidly with any free radicals that may form spontaneously within the liquid and producing forms of stabilized free radicals that are not able to initiate the polymerization process.

Contamination with the polymer beads or granules must be avoided, as these carry the benzoyl peroxide on their surface and only a tiny amount of the polymer is needed to start the polymerization reaction.

The polymer powder is very stable and has a virtually indefinite shelf life.

A cross-linking agent, such as diethylene glycol dimethacrylate, is included in order to improve the mechanical properties (Figure 3.2.1a). These are incorporated at various points along the methyl methacrylate polymer chain and form cross-links with adjacent chains by virtue of their two double-bond sites (Figure 3.2.1b).

Thus, although the PMMA is a thermoplastic resin, the inclusion of the cross-linking agent prevents post-processing.

The chemistry of these resins is identical to that of the heat-cured resins, except that the cure is initiated by a tertiary amine (e.g. dimethyl-P-toluidine or sulphinic acid) rather than heat.

This method of curing is not as efficient as the heat curing process, and tends to result in a lower-molecular-weight material. This has an adverse effect on the strength properties of the material and also raises the amount of uncured residual monomer in the resin. The colour stability is not as good as for the heat-cured material, and the cold-cured resins are more prone to yellowing.

The size of the polymer beads is somewhat smaller than in the heat-cured resin (which has a bead size of 150 µm) to ease dissolution in the monomer to produce a dough. The doughy stage has to be reached before the addition curing reaction begins to affect the viscosity of the mix and prevents the adaptation of the mix to the mould walls.

The lower molecular weight also results in a lowering of the glass transition temperature, with Tg being typically 75–80°C. Whilst one might think that this makes the material more inclined to warpage, this is not so. As no external heat source is used to cure the resin, there is less build-up of internal strain. Nevertheless, the material is highly susceptible to creep, and this can contribute significantly to the eventual distortion of the denture when in use.

These are cold-cure resins that are sufficiently liquid when mixed that they can be poured into a mould made of a hydrocolloid. They give excellent reproduction of surface detail but are inferior to both the heat- and cold-cured acrylics in so many other respects that they are not much used.

A visible-light-activated denture base resin was first introduced in the 1980s, on the premise that it did not contain methyl methacrylate, which is a known sensitizer. Thus the material was advocated for its biocompatibility, but also because of its low bacterial adherence, ease of fabrication and manipulation, patient acceptance, ability to bond to other denture resins and a lack of requirement for proportioning and mixing. The chemistry of these materials has more in common with a composite restorative material than with the denture base resins considered above (see Chapter 2.2). The material is composed of a matrix of urethane dimethacrylate that contains a small amount of colloidal silica to control the rheology. The filler consists of acrylic beads that become part of an interpenetrating polymer network structure when it is cured. Initially, its application was limited because of a lack of impact strength and high brittleness, but a superior product has now become available that is claimed to have superior properties (Eclipse™, Dentsply). It is widely used as a denture hard reline material, for the construction of customized impression trays and for the repair of fractured dentures.

It is important to use the correct powder-to-liquid ratio (2.0/1.0 wt %; 1.6/1.0 vol. %). Too much powder could result in inadequate filling by the monomer of the free space between the powder particles, resulting in a weak material as a consequence of porosity in the final product. Too much monomer will produce excessive polymerization shrinkage and a loss of quality of fit to the denture-bearing surface.

The additives tend to settle out at the bottom of the container and it is important that the container is shaken before use to ensure an even distribution of the powder ingredients.

The colouring pigment is usually incorporated in the polymer powder, but in some cases it may simply be on the surface of the polymer beads and may be washed off by too rapid a contact of the monomer. In this case, the polymer should be added to the monomer slowly. Too little powder will produce too light a shade.

There is a danger that the resin may penetrate the relatively rough surface of the plaster mould and adhere to it. To prevent this, a separating medium must be employed. Nowadays, the separating medium is usually a solution of sodium alginate, although some still recommend the use of tin foil.

There are two problems in particular to watch out for in the processing of acrylics for dentures: one is their porosity and the second is the presence of processing strains.

The problem one is most likely to experience with acrylic resin dentures is the occurrence of porosity during the processing stage. There are two major causes of porosity: polymerization shrinkage-associated contraction porosity, and volatilization of the monomer, termed gaseous porosity.

Contraction porosity occurs because the monomer contracts by some 20% of its volume during processing. By using the powder–liquid system, this contraction is minimized and should be in the region of 5–8%. However, this is not translated into a high linear shrinkage, which, on the basis of the volumetric shrinkage, should be of the order of 1.5–2%, but is in fact somewhere in the region of 0.2–0.5%. It is believed that this is because the observed contraction is due in large part to the thermal contraction as a result of the change from curing temperature to room temperature, rather than due to the polymerization contraction. In order to activate the polymerization process, the temperature in the flask has to be raised to more than 60°C, such that the benzoyl peroxide breaks down and forms free radicals (see Chapter 1.5). Once the reaction has been initiated, it continues to generate heat of its own due to the exothermic reaction. This can push up the temperature of the acrylic to well above 100°C.