This chapter addresses diseases that alter the normal form and function of bone and normal formation of teeth. These diseases produce abnormalities through a disturbance in the balanced serum concentrations of calcium and phosphate and/or through abnormal functioning osteoblasts, osteocytes, and osteoclasts (Fig. 25-1). These factors are essential for the normal development of the initial skeleton and for the continued bone remodeling that occurs thereafter—approximately 5% to 10% of total bone volume in an adult skeleton is replaced per year. For instance, a disease that causes a decrease in serum calcium alters the calcium and phosphate balanced levels, resulting in abnormal bone and tooth formation. A low serum calcium concentration can also result in the mobilization of calcium from bone, depleting the calcium content of bone. The reduced calcium level in bone results in bone with low density in the diagnostic image. Bone remodeling is also altered by the mobilization of calcium from bone resulting in an abnormal trabecular pattern in the diagnostic image. Dental anomalies such as enamel or dentin hypoplasia or hypocalcification are other possible consequences of a reduced serum calcium level. Other diseases can affect changes to bone and teeth through altered serum levels of phosphate or through abnormal numbers and function of osteoblasts, osteocytes, and osteoclasts.

Because systemic disorders affect the entire body, the changes manifested in the appearance of the jaws in diagnostic images are usually generalized and often nonspecific, making it difficult to identify the diseases based on imaging characteristics alone (Table 25-1). The general changes that can be seen in the jaws include the following:

1. Change in size and shape of the bone

2. Change in the number, size, and orientation of trabeculae

Changes in the first three elements can result in a decrease or increase in bone density. 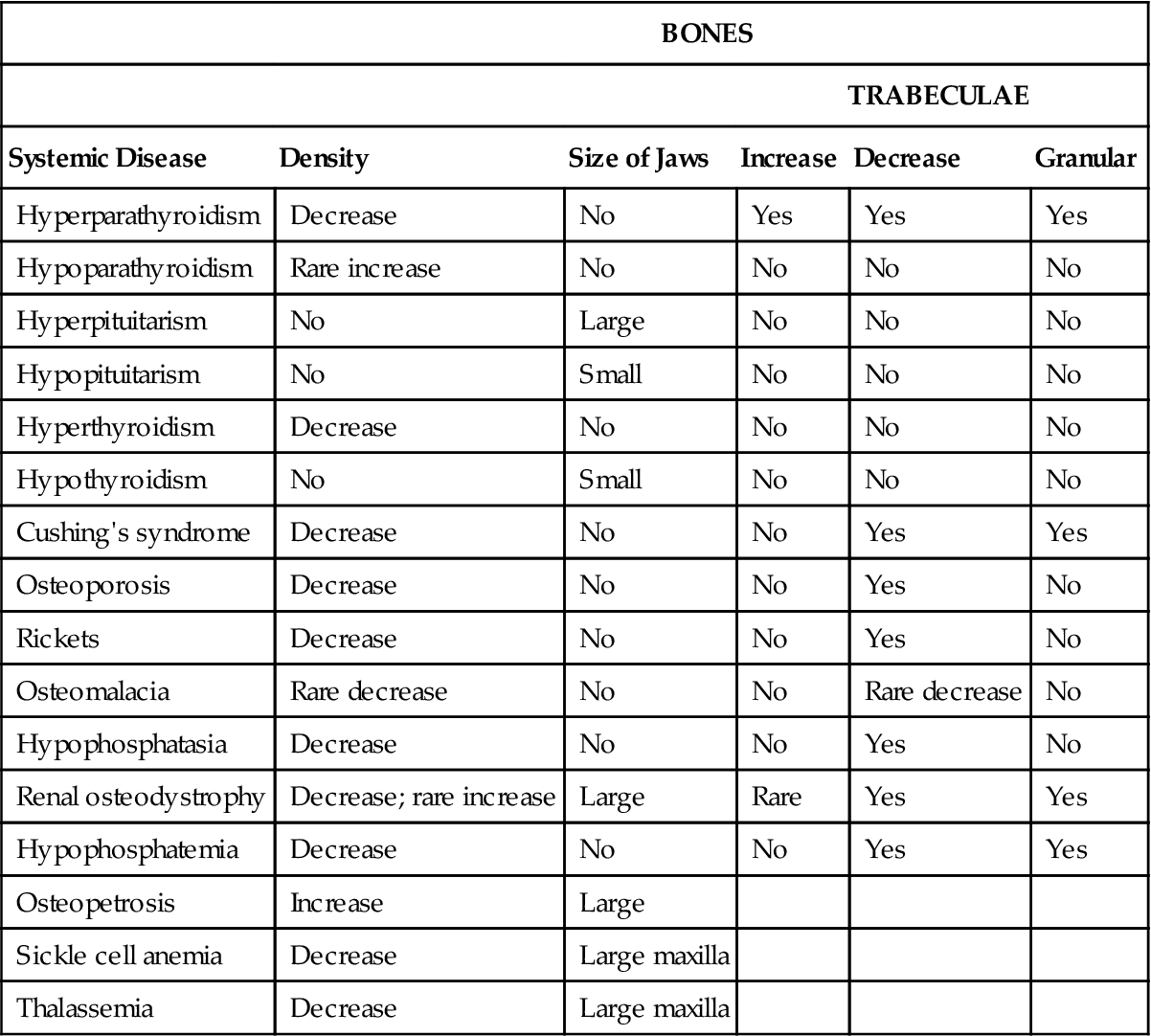 *This table summarizes the major imaging changes to bone with endocrine and metabolic bone diseases. It does not include all the possible variable appearances.

Because many parameters in the production of a diagnostic image influence the density of the image, it may be difficult to detect genuine changes in the density of bone. Systemic conditions that result in a decrease in bone density do not affect mature teeth; the image of the teeth may stand out with normal density against a generally radiolucent jaw. In severe cases, the teeth may appear to lack any bony support. Also, cortical structures appear thin, are less defined, and occasionally disappear. A true increase in bone density may be detected by a loss of contrast of the inferior cortex of the mandible as the radiopacity of the cancellous bone approaches that of cortical bone. Often the radiolucent outline of the inferior alveolar nerve canal appears more distinct in contrast to the surrounding radiopaque dense bone.

Some systemic diseases that occur during tooth formation may result in dental alterations. Lamina dura is part of the bone structure of the alveolar process, but because it is usually examined in conjunction with the periodontal membrane space and roots of teeth, it is included with the description of the dental structures (Table 25-2). Changes to teeth and associated structures include the following:

4. Loss of a distinct lamina dura

Effects on Teeth and Associated Structures* 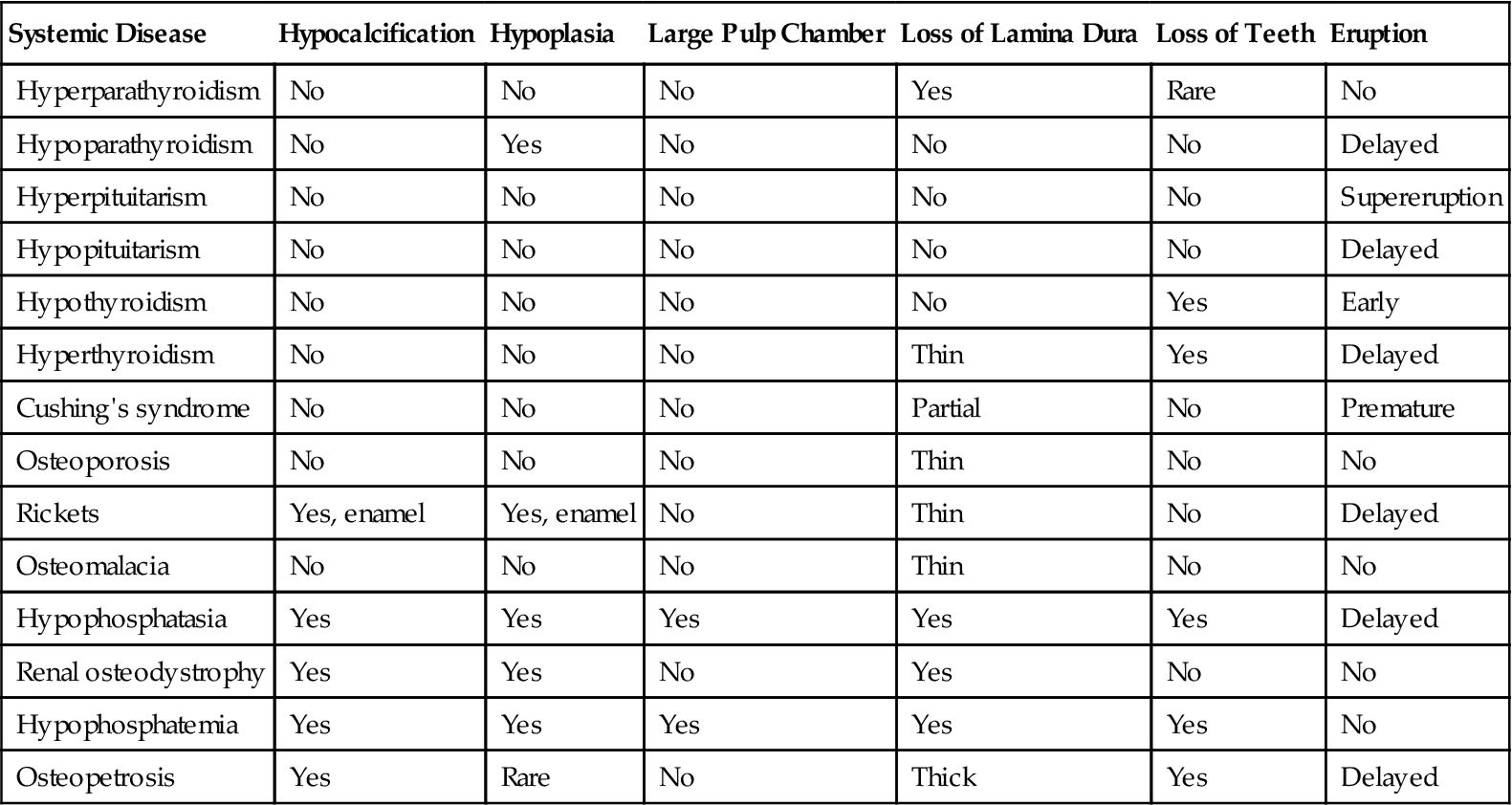 *This table summarizes the major imaging changes that can occur to teeth and associated structures with endocrine and metabolic bone diseases. It does not include all the possible variable appearances.

The teeth and their supporting structures often exhibit no detectable changes associated with systemic diseases. However, the first symptoms of a disease occasionally may manifest as a dental problem.

Hyperparathyroidism is an endocrine abnormality in which there is an excess of circulating parathyroid hormone (PTH). An excess of serum PTH increases bone remodeling but tips the balance of osteoblastic and osteoclastic activity in favor of osteoclastic resorption, which mobilizes calcium from the skeleton. This activity can alter the normal morphology of bone trabeculae into irregularly shaped, small trabeculae, which can result in a granular bone pattern in the diagnostic images. In addition, PTH increases renal tubular reabsorption of calcium and renal production of the active vitamin D metabolite 1,25(OH)2D. The net result of these functions is an increase in serum calcium levels (see Fig. 25-1).

Secondary hyperparathyroidism results from a compensatory increase in the output of PTH in response to hypocalcemia. The underlying hypocalcemia may result from inadequate dietary intake or poor intestinal absorption of vitamin D or from deficient metabolism of vitamin D in the liver or kidneys. This condition produces clinical and imaging features similar to primary hyperparathyroidism.

Primary hyperparathyroidism affects females two to three times more commonly than males. The condition occurs mainly in adults 30 to 60 years old. Clinical manifestations of the disease cover a broad range, but most patients have renal calculi, peptic ulcers, cognitive impairment, or bone and joint pain. These clinical symptoms are mainly related to hypercalcemia. Gradual loosening, drifting, and loss of teeth may occur. The combination of hypercalcemia and an elevated serum level of PTH is diagnostic of primary hyperparathyroidism. Because of daily fluctuations, the serum calcium level should be tested at different intervals. The serum alkaline phosphatase level, a reliable indicator of bone turnover, may also be elevated in hyperparathyroidism.

Only about one in five patients with hyperparathyroidism has observable bone changes.

The major manifestations of hyperparathyroidism are as follows:

1. The earliest and most reliable changes of hyperparathyroidism are subtle erosions of bone from the subperiosteal surfaces of the phalanges of the hands.

2. Demineralization of the skeleton results in an unusual radiolucent appearance (generalized osteopenia).

3. Osteitis fibrosa cystica is seen in advanced cases as localized regions of bone loss produced by osteoclastic activity resulting in a loss of all apparent bone structure.

4. In about 10% of cases, brown tumors occur late in the disease. These lesions are called brown tumors because the gross specimen has a brown or reddish brown color. In diagnostic images, these tumors appear radiolucent.

5. The increased levels of serum calcium result in precipitation of the mineral in the soft tissues forming punctate or nodular calcifications in the joints and kidneys.

6. In prominent hyperparathyroidism, the entire calvaria has a granular appearance classically known as the “salt and pepper” skull. This appearance is caused by loss of the central (diploic) trabeculae and thinning of the cortical tables (Fig. 25-2).

Demineralization and thinning of cortical boundaries often occur in the jaws, including the inferior border of the mandible, the cortical boundaries of the mandibular canal, and the cortical outlines of the maxillary sinuses. The density of the jaws is decreased, resulting in a radiolucent appearance that contrasts with the normal density of the teeth (Fig. 25-3). The elevated rate of bone remodeling can cause an abnormal bone pattern secondary to replacement of normal trabeculae by numerous, small, randomly oriented trabeculae, resulting in a ground-glass appearance in the diagnostic image.

Brown tumors of hyperparathyroidism may appear in any bone but are frequently found in the facial bones and jaws, particularly in cases of long-standing disease. These lesions may be multiple within a single bone. They have variably defined margins and may produce cortical expansion. If solitary, the tumor may resemble a central giant cell granuloma or an aneurysmal bone cyst (Fig. 25-4). The histologic appearance of a brown tumor is identical to giant cell granuloma. If a giant cell granuloma occurs later than the second decade, the patient should be screened for an increase in serum calcium, PTH, and alkaline phosphatase levels.

Occasionally, periapical images reveal loss of the lamina dura in patients (about 10%) with hyperparathyroidism. Depending on the duration and severity of the disease, loss of the lamina dura may occur around one tooth or all the remaining teeth (Fig. 25-5). The loss may be either complete or partial around a particular tooth. The result of lamina dura loss may give the root a tapered appearance because of loss of image contrast. Although PTH mobilizes minerals from the skeleton, mature teeth are immune to this systemic demineralizing process.

After successful surgical removal of the causative parathyroid adenoma, almost all changes revert to normal. The only exception may be the site of a brown tumor, which often heals with bone that is more sclerotic than normal. Many people with this disease are being diagnosed earlier, resulting in fewer severe cases.

Hypoparathyroidism is an uncommon condition in which insufficient secretion of PTH occurs. Several causes exist, but the most common is damage or removal of the parathyroid glands during thyroid surgery. In pseudohypoparathyroidism, there is a defect in the response of the target tissue cells to normal levels of PTH. In both cases, the result is low serum levels of calcium.

There are a variety of clinical manifestations. Most often, manifestations include sharp flexion (tetany) of the wrist and ankle joints (carpopedal spasm). Some patients have sensory abnormalities consisting of paresthesia of the hands, feet, or the area around the mouth. Neurologic changes may include anxiety and depression, epilepsy, parkinsonism, and chorea. Chronic forms may produce a reduction in intellectual capacity. Some patients show no changes. Patients with pseudohypoparathyroidism often have early closure of certain bony epiphyses and manifest short stature or extremity disproportions.

The principal change is calcification of the basal ganglia. On skull images, this calcification appears flocculent and paired within the cerebral hemispheres on the posteroanterior view. Imaging of the jaws may reveal dental enamel hypoplasia, external root resorption, delayed eruption, or root dilaceration (Fig. 25-6).

These conditions are managed with orally administered supplemental calcium and vitamin D.

Synonyms for hyperpituitarism include acromegaly and gigantism.

Hyperpituitarism in children involves generalized overgrowth of most hard and soft tissues, a condition termed gigantism. Active growth occurs in bones in which the epiphyses have not united with the bone shafts. Throughout adolescence, generalized skeletal growth is excessive and may be prolonged. Affected individuals ultimately may attain heights of 7 to 8 feet or more, but they exhibit remarkably normal proportions. The eyes and other parts of the central nervous system do not enlarge except in rare cases in which the condition manifests in infancy.

Adult hyperpituitarism, called acromegaly, has an insidious clinical course, quite different from the clinical profile seen in the childhood disease. In adults, the clinical effects of a pituitary adenoma develop quite slowly because many types of tissues have lost the capacity for growth. This is true of much of the skeleton; however, an excess of growth hormone can stimulate the mandible and the phalanges of the hand. Mandibular condylar growth may be very prominent. Also, the supraorbital ridges and the underlying frontal sinus may be enlarged. Excess growth hormone in adults may also produce hypertrophy of some soft tissues. The lips, tongue, nose, and soft tissues of the hands and feet typically overgrow in adults with acromegaly, sometimes to a striking degree.

The pituitary tumor responsible for hyperpituitarism often produces enlargement (“ballooning”) of the sella turcica (see Fig. 25-7, B). In some examples, the sella may not expand at all. Skull images characteristically reveal enlargement of the paranasal sinuses (especially the frontal sinus). These air sinuses are more prominent in acromegaly than in pituitary gigantism because sinus growth in gigantism tends to be more in step with the generalized enlargement of the facial bones. Hyperpituitarism in adults also produces diffuse thickening of the outer table of the skull.

Hyperpituitarism causes enlargement of the jaws, most notably the mandible (Fig. 25-7, A). The increase in the length of the dental arches results in spacing of the teeth. In acromegaly, the angle between the ramus and body of the mandible may increase. This increase, in combination with the flaring of the anterior teeth caused by enlargement of the tongue (macroglossia), may result in development of an anterior open bite. The sign of incisor flaring is a helpful point of differentiation between acromegalic prognathism and inherited prognathism. In acromegaly, the most profound growth occurs in the condyle and ramus, often resulting in a class III skeleta/>