• The metabolic syndrome is increasingly recognized and potentially fatal

• Inborn metabolic errors are rare but may be life-threatening

In general, a person with metabolic syndrome is twice as likely to develop IHD and five times as likely to develop diabetes as someone without it. The probability of developing metabolic syndrome is also closely linked to a lack of physical activity and the fact of being overweight/obese. Other causes include insulin resistance, ethnicity (often Asian), family history, older age and other factors (Box 23.1). Associated diseases and signs may be raised uric acid levels, hepatic steatosis, haemochromatosis and acanthosis nigricans. Metabolic syndrome may be associated with inflammatory periodontal disease.

Groups at risk for metabolic syndrome

• People with a sibling or parent with diabetes

• People with a personal history of diabetes

• Women with a personal history of polycystic ovarian syndrome

Treatment of metabolic syndrome is to increase physical activity but to reduce weight, unhealthy diet, low-density lipoprotein cholesterol and high blood pressure; diabetes should also be controlled (Chs 5 and 6).

There are a vast number of rare metabolic disorders that result from inherited enzyme defects; some have a high prevalence in certain ethnic groups (Table 23.2). Most arise from recessive traits and thus manifest only when both parents are heterozygous carriers. They affect 1 in 4 of the offspring of heterozygous parents, often as a result of first-cousin marriage. 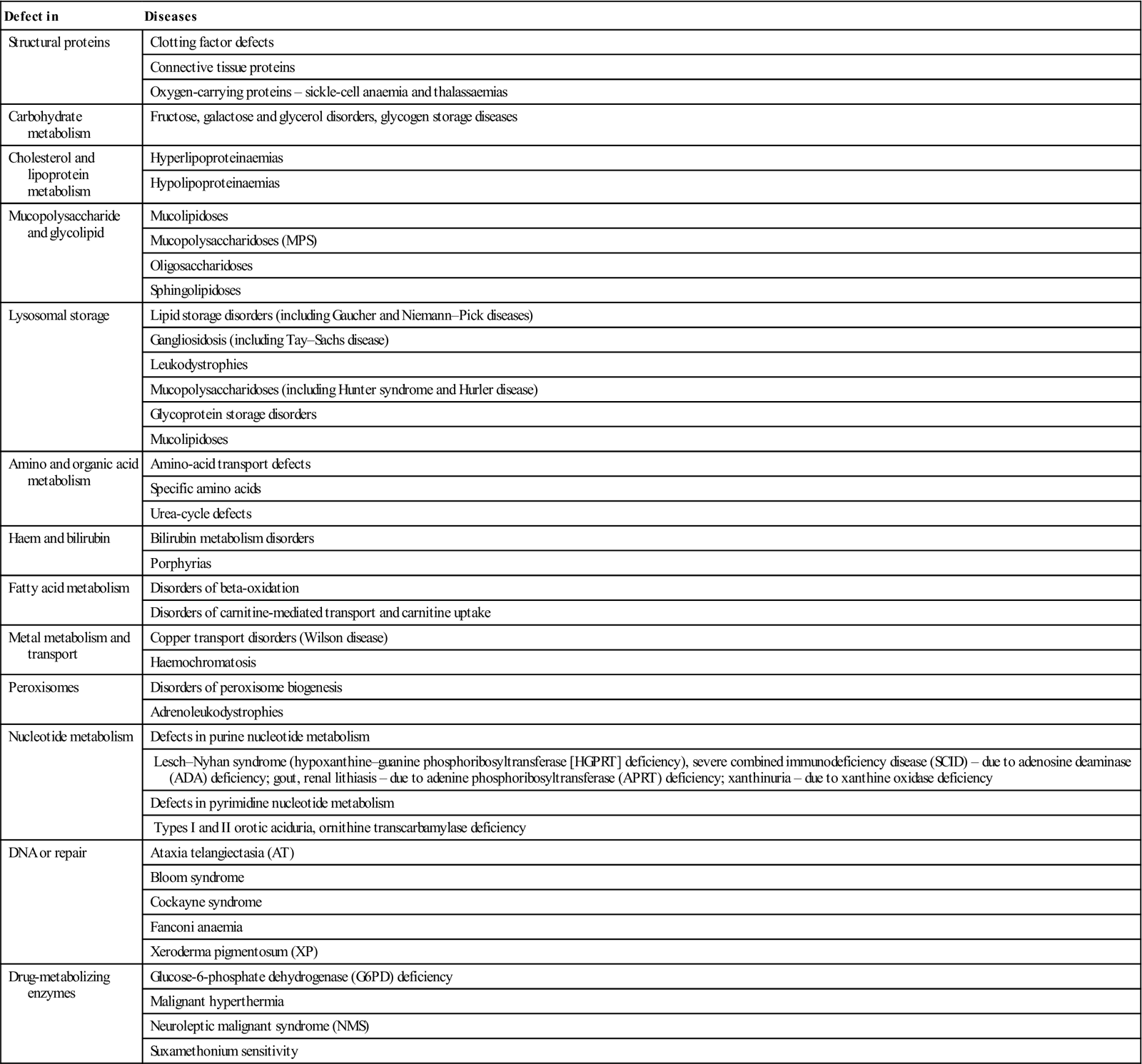 Some inborn errors of metabolism, especially suxamethonium sensitivity, malignant hyperpyrexia, hyperlipoproteinaemias and porphyria, can seriously complicate management if general anaesthesia (GA) is required (see Table 23.2 and Appendix 23.1). Many others are associated with learning impairment or neurological disease. Some others can also be relevant occasionally, such as haemochromatosis, homocystinuria and glycogen storage diseases. A few (e.g. hereditary pentosuria) are innocuous (see Appendix 23.1). Few inborn errors of metabolism will be encountered in primary care, but they are more common in paediatric or special care clinics.

Gaucher disease is a rare lysosomal storage disease, common in Ashkenazi Jews; it is caused by glucocerebrosidase deficiency. Manifesting with hepatosplenomegaly, skeletal involvement (including honeycomb-like mandibular radiolucencies), anaemia and thrombocytopenia, it may present challenges with bleeding and – should the patient be splenectomized – a liability to infection.

Glycogen storage diseases (GSD) are rare disorders due to inherited defects in degradative enzymes that mobilize glycogen to glucose, so that it accumulates and hypoglycaemia results.

Enlarged tongue, periodontal breakdown and masticatory muscle pain may be complaints. Patients with GSD type 1b have a bleeding tendency that can be corrected preoperatively by 24–48 hours of glucose infusion. Local anaesthesia (LA) appears to have no contraindications. Conscious sedation (CS) may be given if required. GA requires expert attention in hospital.

Defects in Cholesterol and Lipoprotein Metabolism

Cholesterol is found in some hormones, as well as in every cell, and thus is an essential element. However, high cholesterol (hypercholesterolaemia), which is directly related to hyperlipoproteinaemia (Table 23.3), predisposes to atherosclerosis (Ch. 5).

The lipoproteins consist of lipids (insoluble in plasma), phospholipids and apolipoproteins (apoproteins). Based on density and electrophoretic mobility, the lipoproteins are divided into four groups:

■ Low-density lipoproteins (LDLs) are associated with a high risk of IHD; they contain a cholesterol core and are formed by hepatic lipase. LDLs bind to cell LDL receptors and are taken up by cells, especially when there is inhibition of 3-hydroxy-3-methylglutaryl coenzyme A reductase (HMG-CoA reductase), which raises cellular cholesterol. The LDL lipoprotein-alpha inhibits fibrinolysis but promotes atherosclerosis.

■ High-density lipoproteins (HDLs), formed in liver and gut, carry cholesterol from intracellular tissue pools back to the liver and are associated with a lowered risk of IHD. The main plasma lipids transported are triglycerides, cholesterol ester and phospholipids (lecithin, sphingomyelin, etc.). Non-esterified fatty acids and cholesterol are also present.

Hypercholesterolaemia can be due to abnormalities in lipoprotein levels related to diet, or secondary to obesity, diabetes, hypothyroidism, nephrotic syndrome, chronic renal failure, liver disease, alcoholism, smoking (lowers HDL) and use of oral contraceptives. In primary (familial) hyperlipidaemia (FH), genetic factors play a role, with defects, for example, in the LDL receptor (LDLR), apolipoprotein B-100 (APOB) and proprotein convertase subtilisin/kexin type 9 (PCSK9) genes.

Gout, arthralgias, arthritis and premature IHD may result. Yellowish cutaneous plaques called xanthomas, in soft tissue, tendons and subperiosteal and intraosseous locations (xanthelasmas on the eyelids; Fig. 23.3), are associated with accelerated IHD. Prominent xanthomas on elbows and knees, especially with yellow to orange discolouration of palmar creases, are unique to type II hyperlipoproteinaemia.

Around 75% of FH is undiagnosed, so screening for LDLR, APOB and PCSK9 genes may help. Dietary intervention and lipid-lowering drugs (particularly statins – HMG-CoA reductase inhibitors) are essential to treatment (Ch 5). Ezetimibe is an option for primary hypercholesterolaemia.

LA is the safest method of pain control. CS can be given if required. GA may be a risk because of IHD.

Facial xanthomas may help recognition of these potentially dangerous diseases. Types IV and V hyperlipoproteinaemias may be complicated by sicca syndrome.

Pulpal calcifications, unusual odontomes and orange deposits in the tonsils may be found in HDL deficiency (Tangier disease).

Homocysteine (Hcy), a sulphur amino acid, is an intermediate product in conversion of methionine to cysteine; it participates in the re-methylation pathway, enabling maintenance of adequate cellular levels of methionine, or is catabolized by trans-sulphuration. Several hereditary defects in the enzymes involved and acquired deficiencies in the vitamin cofactors of these enzymes can cause hyperhomocysteinaemia.

Affected patients are tall with a Marfanoid appearance, joint hypermobility, ectopia lentis, and visual and mental deterioration. Blood vessel abnormalities, together with excessive platelet adhesiveness, predispose to thromboembolism, both spontaneously and postoperatively. Pyridoxine is the treatment. During and after surgery, aggressive hydration and prophylaxis for deep vein thrombosis (DVT) are recommended.

Porphyrias are rare inborn errors in enzymes involved in haem metabolism, which result in the accumulation of porphyrins, the intermediate compounds in haem(oglobin) synthesis (Fig. 23.4). Classification is according to the principal site of enzyme defect: namely, liver (hepatic porphyrias) or erythrocytes (erythropoietic porphyrias; Table 23.4).

Most people with porphyrias enjoy entirely normal health. However, three porphyrias are significant clinically, since drugs precipitate acute illness. Patients may develop potentially fatal acute attacks of cardiovascular (hypertension and tachycardia) and gastrointestinal disturbances, accompanied by neuropsychiatric disturbance (porphyria in King George III of England probably explains his ‘madness’). These porphyrias are variegate porphyria, the commonest, found mainly in South Africans of Afrikaans descent; acute intermittent porphyria, seen less frequently but affecting all population groups; and hereditary coproporphyria, which is rare and may cause patients to appear normal, apart from severe photosensitivity rashes.

Most of the drugs that have been incriminated in attacks are enzyme inducers that also increase hepatic 5-aminolaevulinic acid (ALA) synthetase levels. Assessing drug safety in porphyria is an inexact science; for many drugs no such information is available, and for some others the data are of doubtful validity and often conflicting (Table 23.5). A wide array of other factors can cause exacerbations, including fasting, alcohol, infections and pregnancy.

aList is not exhaustive.

Often a single dose of a drug of this type can precipitate an acute episode, but in some patients, repeated doses are necessary to provoke a reaction. Attacks are accompanied by cardiovascular disturbance (tachycardia and hypertension, sometimes followed by postural hypotension). Respiratory embarrassment or major convulsions and neuropsychiatric disturbance (typically a peripheral sensory and motor neuropathy, but sometimes agitation, mania, depression, hallucinations and schizophrenic-like behaviour) may occur. Autonomic dysfunction may cause profuse sweating, pallor and pyrexia. Severe hyponatraem/>