Minimally invasive oral and maxillofacial surgical techniques make use of small unobtrusive incisions placed at a distance from the surgical site in order to minimize soft tissue dissection and to diminish manipulation and trauma to the tissues.1 Adequate visualization is achieved with a small endoscope that provides a magnified operative field. Diminished bleeding, edema, and pain result in a quicker recovery for patients.2–6 In addition, reduced length of hospital stay and faster return of patients to work may potentially reduce the cost of health care.7

Although less invasive operations offer several advantages for the patient, they are not technically easier or less complicated for the surgeon. Most currently practicing oral and maxillofacial surgeons were not trained in minimally invasive surgery during their residency programs. Additional training and acquisition of new skills are required to execute these new techniques. There is a learning curve, and even in the hands of experienced surgeons, minimally invasive operations usually take longer to perform and may be technically more difficult than the standard procedures.

Four minimally invasive orthognathic surgery procedures are currently being studied and in clinical use at the Massachusetts General Hospital (MGH): (1) endoscopic vertical ramus osteotomy (EVRO)8; (2) endoscopic condylectomy and costochondral grafting7; (3) endoscopic high condylectomy or resection; and (4) distraction osteogenesis (DO) of the mandible.9

Mandibular setback for the treatment of mandibular prognathism can be accomplished by a vertical ramus osteotomy or by a bilateral sagittal split osteotomy (BSSO). The standard vertical ramus osteotomy is typically performed intraorally and requires a period of maxillomandibular fixation (MMF) because rigid fixation is not feasible. Advantages of this technique include its technical simplicity, short surgical time, and a low incidence of inferior alveolar nerve damage.10,11 The BSSO allows rigid fixation and does not require MMF, but the incidence of neurosensory deficit from trauma to the inferior alveolar nerve ranges from 12.5% to 100%.12–14

A minimally invasive alternative for mandibular setback is the EVRO7,8,15 (Figures 20.1 and 20.2). With this procedure, the risk to the inferior alveolar nerve is minimal and rigid internal fixation can be used, thereby eliminating the need for MMF. Disadvantages of the EVRO include potential damage to the marginal mandibular branch of the facial nerve and small extraoral submandibular scars.

Figure 20.1 The operating room setup for mandibular endoscopic procedures consists of an endoscopist (E), assistants, and a video monitoring unit placed at the head of the patient. The anesthesia team is positioned toward the foot of the bed on the same side as the assistant (not seen). 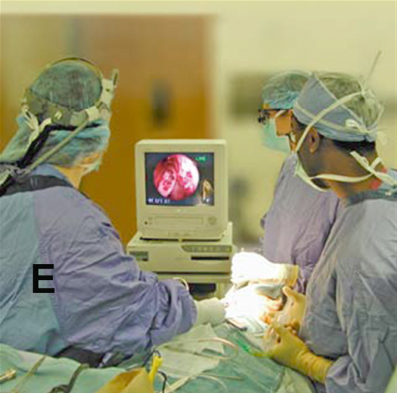 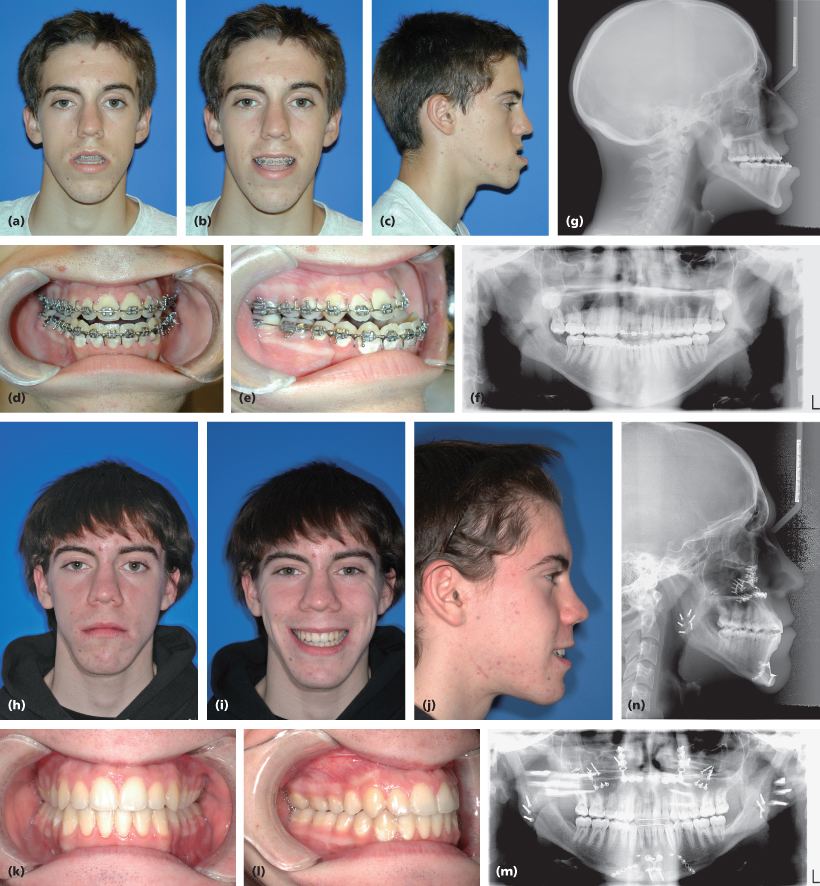 Troulis and Kaban reported a retrospective study of 14 patients who underwent EVRO.8 The mean operating time was 37 minutes per side. No neurosensory deficit in the territory of the inferior alveolar nerve was noted and only one case of temporary paresis of the marginal mandibular branch of the facial nerve was observed. No relapse was noted on lateral cephalometric radiographs during a mean follow-up period of 1.7 years (6–24 months). 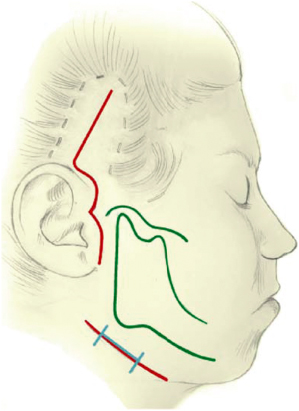 Figure 20.4 Schematic diagrams for dissection of the optical cavity for ramus-condyle unit access. The submandibular incision is performed parallel to the skin creases at the mandibular angle (a). This allows for placement of the endoscope parallel to the posterior border of the mandible in the subperiosteal plane, in line with the area of interest (b). 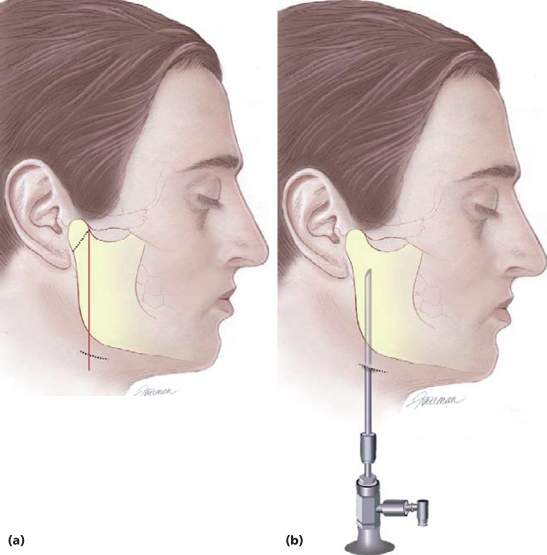 Figure 20.5 Schematic drawing of the endoscopic view showing bony landmarks of the left ramus-condyle unit. Landmarks to be identified with the endoscope include the sigmoid notch (S), posterior border (P), and mandibular angle (A). 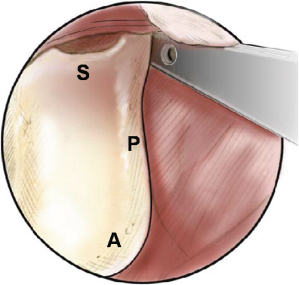 The proposed osteotomy is then marked with a sterile graphite pencil from the sigmoid notch to the mandibular angle. The cut is performed under direct endoscopic visualization with a custom-made long-shaft reciprocating saw blade (Stryker-Leibinger, Kalamazoo, MI). The same procedure is repeated on the opposite side. Once both osteotomies are completed, the mandible is placed in the desired dental occlusion and immobilized by wire MMF. The two fragments are rigidly fixated through the incision under direct visualization. Positional bicortical screws or plates can be used depending on the amount of overlap between segments. The medial pterygoid muscle fibers at the inferior portion of proximal fragment may be dissected to facilitate overlapping.

Condylar resorption is a progressive alteration of condylar shape and a decrease in mass and size. Some factors that have been associated with this condition include rheumatoid arthritis, systemic lupus erythematosus, steroid use, trauma, neoplasia, orthodontic treatment, and orthognathic surgery. When there is no identifiable cause, this condition is called idiopathic condylar resorption.16 The flattening, thinning, and reduction in size of the condylar head eventually lead to a decrease in mandibular ramus-condyle unit length and posterior facial height, retrognathism, and clockwise rotation of the mandible. The patient complains of progressive retrusion of the chin and anterior open bite (Figure 20.6).