Prominent or protruding ears, commonly referred to as “prominauris,” are a common congenital anomaly. This particular auricular deformity affects nearly 5% of the Caucasian population.1 Congenital in nature, the patient presenting to the office is typically a child who may already be suffering the psychological consequences of the deformity in the form of ridicule by their peers and playmates. In the Japanese culture, it is seen as a sign of good fortune to have protruding ears; however, no such view is held in Western culture. Children with prominent ears are alleged to have a higher incidence of behavioral and psychological problems than those who do not.2

Fortunately, protruding ears can be safely and predictably corrected for these children prior to entering kindergarten, thus halting or even avoiding the emotional trauma caused by ridicule. Correcting this problem at an early age cannot only prevent the ridicule from peers but greatly enhance self-esteem. The vast majority of cosmetic surgical procedures are performed primarily in the adult population; however, otoplastic surgery is performed primarily on children, and because of this, can be an invaluable service for the young patient and very rewarding for the surgeon.

The history for correction of auricular deformities dates back to the mid-1800s, with numerous publications describing the various techniques. Understanding the historical perspective of these various techniques is important for the surgeon in order to develop a safe, predictable, and successful method of correcting prominent ears. Dieffenbach (1845) is credited with the first otoplastic technique to correct a prominent auricle. He described a “suture-only” technique in which he excised postauricular skin and placed sutures from the mastoid periosteum to the auricular cartilage to correct a posttraumatic deformity.3 Ely, in 1881, published the first case report describing correction of protruding ears in a 12-year-old boy who was being teased at school.4 Although successful in correcting the protruding ears, his described technique of excision of skin and cartilage resulted in sharp cartilaginous folds visible in the antihelical cartilage. A number of different techniques followed, each a modification or variation of excising and/or suturing excessive auricular cartilage. Monks (1891) described a combined skin and cartilage excision,5 while Morestin (1903) excised conchal cartilage in an effort to reduce the cartilaginous memory.6 Luckett (1910) diagnosed a malformed antihelical fold in many of his patients and used a cartilaginous incision to re-create it.7

Subsequent developments gradually became more sophisticated, and since that initial case report by Ely, well over 100 surgical techniques have been described in the literature for the correction of prominent ears.

When clinically evaluating the face, it is common for surgeons to overlook the shape, form, and position of the ears. If protruding ears are present, corrective otoplasty, either as an adjunctive or isolated procedure, can be performed predictably, often with satisfying results. A familiarity with the embryological development of the human ear, along with the resultant external anatomy of the ear, is of paramount importance in developing a safe and reliable technique to deal with the common auricular deformities.

Embryological Development of the External Ear

Because of subjectivity, malformations of the auricle are difficult to quantify; however, they reportedly are relatively common, occurring in 1 in 12,500 births.8 Because of the complexity of ear development, malformations can occur alone or in combination with any number of syndromes affecting the head and neck structures. The embryogenesis of the external ear exemplifies in miniature the precise and logical progressions so characteristic of the developing human form. The auricular development during the 3rd to 12th week of embryonic life is complex. The precursors to the auricle present from day 36–38 of intrauterine life. They develop initially from the first branchial groove, where the first (mandibular) and second (hyoid) branchial arches are present (Figure 16.1). Both arches give rise to the auricular hillocks, also referred to as the auricular tubercles of His.9 Tubercle numbers 1, 2, and 3 arise from the caudal border of the mandibular arch, and numbers 4, 5, and 6 are formed from the cephalic border of the hyoid arch. The auricular tubercles have developed to their most prominent and characteristic form by day 41. Throughout this same stage, the depression between the first and second arches (hyomandibular groove) widens and deepens by the increased growth of the tubercles. This groove eventually forms the external auditory canal and conchal cavity. By day 43–45, the tubercles have migrated and coalesced to form the external ear.9 During this union, the mesenchyma of the hyoid arch increases substantially in size relative to the mandibular arch to contribute 85% of the adult external ear. Subsequently, tubercles 2 and 3 from the mandibular arch fuse to form the helical crus. Tubercles 4 and 5 from the hyoid arch merge as well, and give rise to the helix and the antihelical fold. Tubercle 1 remains prominent and becomes the tragus, and tubercle 6 becomes the antitragus.9

Figure 16.1 Embryological development of the auricle from the six tubercles of His. 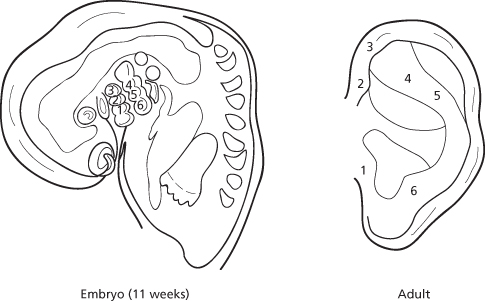 It is often a concern to perform surgery on a growing child.

However, an important point for the surgeon to realize in otoplastic surgery is that the majority of the growth of the pinna is completed by an early age. By 1 year of age, the pinna is over 80% the size of an adult pinna,9 and this increases to 85% by age 3.2 There is little growth after the age of 10 other than ear height, which continues to grow into adulthood.

It is important to note that each individual’s ears often vary in size and shape.10 The average adult ear is 5.5–6.5 cm in length and 3–4.5 cm in width. In the “normal” ear, the auricle lies between horizontal lines drawn from the supraorbital rim and the anterior nasal spine. The normal posterior wall of the conchal bowl is set at an angle of approximately 90 degrees to the underlying scalp.11 The antihelical fold is formed by a second 90-degree angle within the scaphoid cartilage and is called the scaphaconchal angle. In combination with the curvature of the helix, these two angles set the auricle adjacent to the scalp at approximately 25–35 degrees, forming the auriculocephalic angle12 (Figure 16.2).

Figure 16.2 The two ideal angles of 90 degrees creating an auriculocephalic (AC) angle of 30 degrees, observed on an axial section at the midlevel of the helix in a “normal” ear. 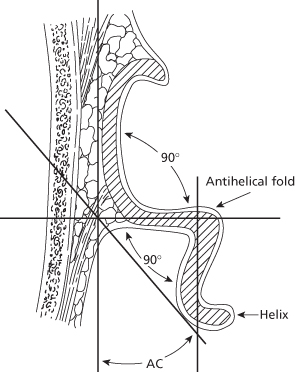 When correcting protruding ears, it is important to note that there are three consistent and important anatomical “pearls” that can be used intraoperatively to assess the final correction. First, the helical rim should be visualized just lateral to the most lateral projection of the antihelical fold from the frontal view. Second, the distance measured between the most lateral aspect of the helical rim and the underlying mastoid area should be slightly less than 2 cm. Finally, the distance measured between the scalp and uppermost lateral projection of the helix is approximately 1 cm (Figure 16.3).

The auricular cartilage is a unique and delicate structure that is intricately shaped with multiple elevations and depressions, providing both skeletal support and form to the adult ear. The cartilage of the auricle is a single piece of yellow “elastic” fibrocartilage with a complicated relief on the anterior, concave side and a smooth, posterior convex side. The cartilage is thicker within the conchal bowl as compared with the pinna, and is covered on both surfaces by a thin, firm, adherent layer of perichondrium. The lateral anterior surface of the cartilage is covered with a fine, thin skin, closely adherent to the underlying perichondrium and cartilaginous framework. There is little subcutaneous fat but a diffuse subdermal vascular plane exists that supports flap viability.13 The posterior surface of the cartilaginous framework is draped with a less adherent skin that contains two distinct layers of subcutaneous fat and a larger subdermal plexus of arteries, veins, and nerves.

The helical border, or helix, terminates anteriorly in a crus, known as the radix, which lies almost horizontally above the external auditory meatus. The antihelical fold, or antihelix, crowning the posterior conchal wall separates and diverges into both a superior and anterior crus, forming between them the triangularis fossa. A long, deep furrow lying between the helix and antihelix is called the scaphoid fossa. The conchal cavity, also known as the conchal bowl, composed of the cymba (superior) and cavum (inferior) conchae, arises from the floor, which is approximately 8 mm deeper than the overlying tragus and antitragus. The most inferior aspect of the posterior helical border is referred to as the cauda, or tail. Extending inferiorly from the cauda is the lobule, hanging devoid of a cartilaginous skeleton (Figure 16.4). 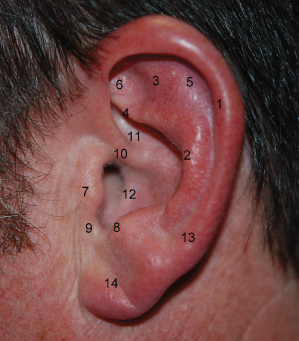 The external ears have a tremendous blood supply, allowing multiple invasive surgical approaches, and a greater potential for healing or salvage of the ear following traumatic avulsion.

The arterial blood supply to the ear is the superficial temporal artery and posterior auricular artery, both main branches of the external carotid artery. The superficial temporal artery emerges from the parotid capsule, 1 cm in front of the ear, deep to the veins and below the anterior auricular muscle. It then divides into the superior, medial, and inferior branches supplying the anterior surface of the auricle (Figure 16.5a). The posterior auricular artery dominantly supplies the posterior surface of the ear and travels parallel to the postauricular crease upward, crossing below the great auricular nerve and under the postauricular muscle. Awareness of this relationship is important to avoid damage to the artery or nerve during surgery. The posterior auricular artery then divides into a superior, medial, and inferior branch, providing a greater blood supply to the postauricular ear than its anterior counterparts. These same vessels have an abundance of perforations through the auricular cartilage over a large surface of the anterior ear, thus creating a large network of anastomoses with the branches of the superficial temporal artery. 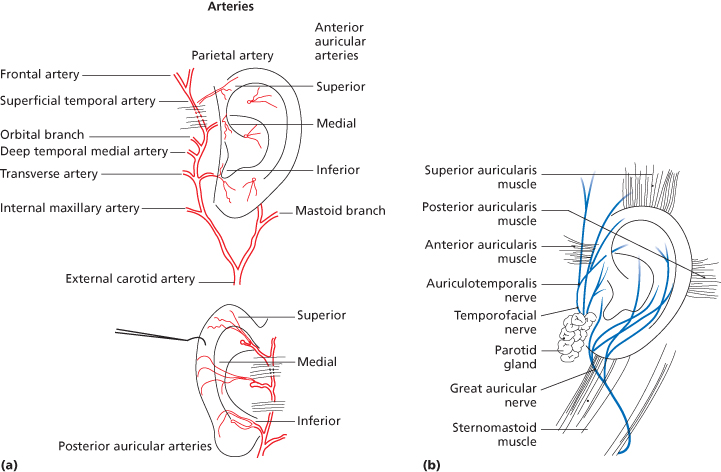 Venous drainage of the ear via the complementary veins is into the external jugular vein. Lymphatic drainage is into three surrounding areas via the complex and extensive fine network of perilymphatic vessels.

The central sensory nerve supply is primarily from the anterior and posterior branches of the great auricular nerve. The nerve is an important surgical landmark, traveling approximately 8 mm posterior to the postauricular crease. When surgically dissecting in this area, care must be taken to avoid damage to the nerve. There are several other less important contributions of sensation, which are primarily the auriculotemporal and lesser occipital nerves, to the conchal cavity and external auditory meatus (Figure 16.5b).

Regional anesthesia of the auricle is readily accomplished by injecting local anesthesia along its base anteriorly and posteriorly. Additional local anesthesia may be needed at the posterior wall of the external auditory meatus supplied by the auricular branches of the vagus nerve (Arnold’s nerve).

The deformities present in protruding ears are of a different etiology than those present in atresia or microtia. While microtia and atresia are often associated with other congenital abnormalities and syndromes, this is not generally true of prominauris. The inheritance of prominent ears can be described in Mendelian genetics as an autosomal dominant trait with variable penetrance.11 As described previously, ear deformities are common and variable due to the complex embryological development of the auricle. Many classification systems of ear deformities have been attempted. Tanzer classifies congenital ear defects, correlating embryological development with a surgical approach for correction of the />

Tags: Cosmesis of the Mouth Face and Jaws
Jan 3, 2015 | Posted by mrzezo in Esthetic Dentristry | Comments Off on 16 Otoplasty: Surgical Correction of the Prominent Ear
Premium Wordpress Themes by UFO Themes
WordPress theme by UFO themes