Over the past 15 years, there has been an ongoing cosmetic and technical revolution in hair transplantation. The era of unnatural, pluggy, straight hairlines is over. In the twenty-first century, all men and women undergoing the procedure should expect consistently natural-appearing transplanted hair (Figures 21.1 and 21.2). This chapter will be an overview of the following: candidate selection; the role of medical therapy with surgery; anesthesia; donor harvesting techniques; hairline design; corrective hair transplantation; staff training; and future trends in transplantation.

Hair transplantation is based on the theory of donor dominance, which is the ability of hair taken from one area to retain its growth characteristics, even when transplanted to another area.1 Thus, hair removed from the posterior scalp in men and women can retain its long-term color, caliber, and ability to grow even when placed into areas of genetic thinning such as the frontal scalp. This theory was successfully put into clinical practice in the early 1960s. Hair transplantation was a scientific success for decades but a cosmetic failure. This is because oversized punch grafts containing 10–20 hair follicles were utilized. In the early 1990s, surgeons began to create more natural one to four hair follicular groupings that mimicked the usual growth of hair. This has resulted in consistently natural-appearing transplanted hair for men and women.

All skin types and hair colors are candidates for transplantation. Patients with androgenetic alopecia, scarring from cosmetic or reconstructive surgeries, and traction alopecia are most likely to benefit. Unfortunately, inflammatory absence of hair, such as alopecia areata and lichen planopilaris, can develop unpredictable flaring and result in a loss of the transplanted hair. Key physical characteristics that help determine expected density include donor density and the caliber of hair follicles. Patients with a large number of hair follicles per square centimeter and coarse or wavy hair can expect a dramatic increase in density, while those with decreased donor densities and fine thin hairs will still benefit from a transplant but with less dramatic cosmetic impact.

Key concepts to discuss during a consultation include the ongoing rate of hair loss for men and women and how it will impact the density appearance of transplanted hair. It is vital that a transplant be planned assuming hair loss will continue. This is why the majority of the procedures are performed over the frontal half of the scalp. Hair transplanted into the frontal scalp will appear natural over the short, medium, and long term. Transplanting hairs into the vertex of the scalp in men can be cosmetically risky. An ever-expanding rim of bald skin will produce an unnatural “doughnut” around any hair transplanted centrally (Figure 21.3). Transplanted hair that appears natural in a patient in their third or fourth decade will look unnatural as the hairline drops to the posterior and lateral scalp in their fifth, sixth, and seventh decades. These concepts should be discussed with all patients during the consult. 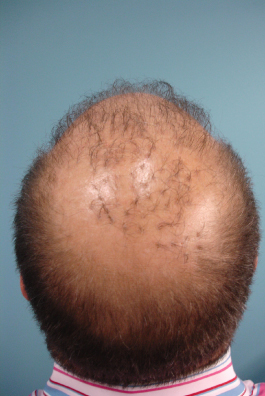 As with all procedures, discussions regarding the amount of donor hair available, the caliber of hair that is transplanted, and how ongoing hair loss will affect the net perceived density and cosmetic distribution of transplanted hair will help to create realistic patient expectations. If a patient has a complete understanding of what a transplant can and cannot achieve, patients and physicians will be consistently happy with the results. Those individuals who do not understand how donor density, caliber of their hair, and ongoing hair loss will affect the short- and long-term result of the procedure should not undergo surgery.

There are two Food and Drug Administration (FDA) approved medications for male pattern hair loss and one for female pattern hair loss. Minoxidil and finasteride are approved for men, while the former is the only medication approved for women2–4 (Table 21.1). Both of these are highly effective to help maintain existing hair and, in some patients, can potentially thicken and regrow hair. For this reason, they are excellent adjuncts to surgery. Neither is particularly effective at regrowing hair in men or women with extensive hair loss. Likewise, they are ultimately elective and may be discontinued at any point by the patient, without the physician’s awareness. For this reason, one should not alter candidate selection, hairline design, or distribution of transplanted hair based on a patient’s use of medications. If patients do stop their drugs, the new or retained hair will gradually thin over several months, back to its original state.

Table 21.1 The only two FDA-approved medications for hair loss