Charles A. Babbush, Jack A. Hahn

When two-stage, root-form osseointegration implants were first introduced, the techniques for using them were based on the assumption that implants would be placed into healed alveolar ridges.1,2 In the last 12 to 15 years, however, the concept of placing both two-stage and now one-stage implants into fresh extraction sites has excited the field of implant reconstruction.3–5

Immediate implant placement offers both the patient and clinician a number of benefits (Box 20-1). Elimination of the postextraction wait for primary healing of the soft tissues and regeneration of the osseous structure shortens the overall treatment time. Even when extraction is atraumatic, the absence of a functioning dental unit causes the bone to undergo a catabolic phase that results in varying degrees of atrophy. In contrast, placing the implant immediately after extraction preserves the bony receptor site as well as the surrounding soft tissue. Another benefit of immediate placement after extraction is that design and fabrication of the prosthesis typically are improved, resulting in better-finished lines and margins, heights of contour, emergence profiles, and interproximal architecture. Finally, since the extraction socket is totally visible, the surgeon can better determine the appropriate alignment and parallelism relative to the adjacent and opposing residual dentition. The result is a better implant position, which in turn ensures better final function and aesthetics6 (Table 20-1).

This chapter presents clinical guidelines developed by the authors for placing implants immediately following extraction. A series of cases is used to illustrate this concept.

In the early 1990s only one article was available for review in evaluating this concept.3 Because of this lack of research a 5-year retrospective study was instituted by Babbush. From 1988 to 1993 the author placed 163 implants in fresh extraction sites in 80 patients. The male/female ratio among the patients was 2 to 1, and the average age was 59 years, +/- 14 years. Indications included single-tooth replacement, unilateral distal free-end, bilateral distal free-end, intermediary piers, and full-arch reconstruction in both the maxilla and mandible.6,7 Only two implants failed. Life-table statistical analysis revealed a 96.4% 5-year survival rate for this series of cases.8

Based on this experience, the following clinical surgical guidelines were developed (Box 20-2):

• Prior to all elective procedures, patients are thoroughly evaluated. Preoperative evaluations are not always possible in acute situations such as those involving a fractured tooth that is nonrestorable or has pulpal exposure.
• Whenever there is evidence of an acute infectious process, antibiotic therapy is initiated 2 to 3 days prior to surgery.
• Patients are informed preoperatively that if any purulent exudate is discovered during the course of the surgery, the implant placement and/or grafting procedures will not be carried out but instead a delayed procedure will ensue. Unless there is a fistulous track and/or exudate around the sulcus, this determination is usually made interoperatively.

The procedure is typically initiated by reflecting the mucoperiosteal tissues and surgically removing the tooth as atraumatically as possible. The recent introduction of the X-Trac Extraction Systems (A. Titan Instruments, Hamburg, NY) has made it possible in many instances to atraumatically remove the tooth in toto.9 When a tooth has previously been treated with endodontic therapy, however, it may be brittle or even ankylosed to the surrounding bone. In such cases, to best preserve the osseous receptor site, the author uses a high-speed, contra-angle handpiece with a 700 XXL to section the tooth longitudinally and dissect the segments, which are then removed with the aid of periotomes.

Whenever the osseous defect exists in proximity to the implant, grafting and/or the use of a barrier membrane should be considered (Box 20-3). Grafting is also indicated when the labial or buccal bone is eggshell-thin or so thin that the implant and/or the burs can be seen through the bone or when an actual dehiscence exists. Such compromised areas are usually avascular. A bone graft will improve the vascular supply and prevent secondary dehiscence due to avascular necrosis. The use of resorbable barrier membranes may also be considered. Barrier membranes should be immobilized with fixation devices whenever possible. By following these guidelines for extraction and immediate placement, the author has achieved excellent outcomes in more than 1000 cases. 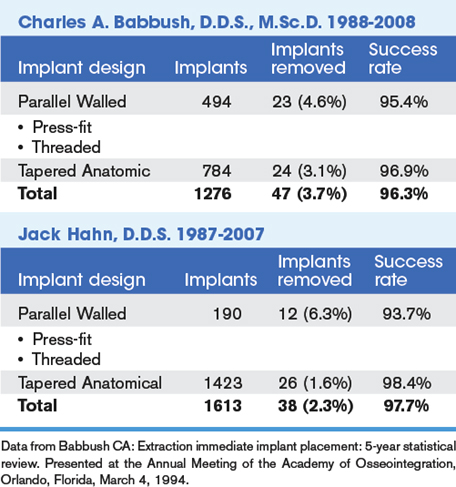 BOX 20-3 When to consider grafting procedures

Although excellent results can be obtained when placing standard implants in fresh extraction sites, tapered anatomically shaped implants have a broad base of indications. Instead of having a uniform diameter, such implants more closely mimic the shape of the natural tooth roots (Figure 20-1). They are wider at the cervix than at the apex. Tapered implants such as the Replace Groovy and NobelActive (Nobel Biocare, Yorba Linda, CA) are available in various lengths (8, 10, 13 and 16 mm) and surface diameters 3.5, 4.3, 5 and 6 mm. The NobelActive has 10, 11.5, 13, and 15 mm lengths and 3.5, 4.3, and 5.0 mm diameters. Both systems have TiUnite (Nobel Biocare) surface properties allowing for intimate interaction between the implant surface and the surrounding living cells and tissue.10 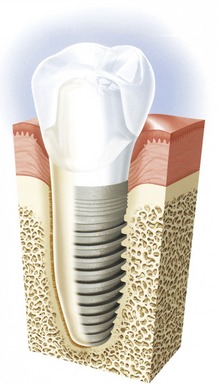 Figure 20-1. When the implant is placed immediately after extraction the tapered form provides a number of advantages over a uniform-diameter implant because tapered implants more closely mimic the shape of the natural tooth roots.

When used immediately after extraction, tapered implants offer a number of advantages. The larger cervical diameter provides better buccal support and helps preserve the root prominence, an important benefit in all implant reconstruction and especially so in the aesthetic zone of the anterior maxilla. The larger cervical diameter also improves the implant-to-bone interface, which in turn enhances stability and creates a more acceptable emergence profile in relation to the final prosthesis. In many instances, the tapered design may obviate the need to use grafting materials or a membrane, thus helping reduce the cost of treatment. The incidence of fenestration and dehiscence is greatly reduced with tapered implants as opposed to parallel-walled implants.

The tapered design also allows the implant to be placed in the same position as the extracted tooth and avoids the buccal or labial wall perforation common in the anterior maxilla when using parallel-walled implants. Perforation of the submandibular and digastric fossa in the mandible also can be avoided. Because the position of the implant is similar to that of the extracted tooth, restoration can be in a more favorable position relative to the opposing arch, thus reducing excessive off-axis loading on the implant. In addition, the tapered implant can be used in cases with convergent adjacent roots, where a parallel-walled implant would be contraindicated.

Dental studies have shown that textured implant surfaces, including appropriately placed surface grooves on the threads of implants, can increase stability compared to implants without textured surfaces.11–14 The literature suggests that grooved implants could optimize implant stability, particularly when clinical conditions do not favor implantation. Extensive biomechanical and histological testing of oxidized titanium implants has identified the optimal groove for promoting growth and stability. Bone forms preferentially within the grooves, compared to other parts of the implant, and these implants are effective even in soft bone. Grooves are even more effective when they are used in bone of lower quality, when their enhanced osseoconductive properties produce a guiding effect on bone-forming cells.

A rabbit model study involving oxidized implant surfaces concluded that bone was stimulated to form along an implant grooved by 110 and 200 micron-wide and 70 micron-deep grooves. The 110 micron-wide groove significantly increased resistance to shear forces. Research shows that bone preferentially bonds with grooves, so grooves have been extended to the collar of the implants to increase surface area and bone-to-implant contact.15,16

The unique design of NobelActive makes it an excellent choice in all indications, but especially in regions of diminished bone quantity or quality, due to its bone condensing capability, compatibility with shorter drilling protocols, and ability to change direction on insertion (Figure 20-2). 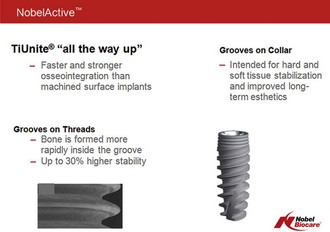 Figure 20-2. The NobelActive implant can be used in all indications, especially in areas of reduced quality and quantity of bone because of the bone condensing feature. Those features also allow the clinician to under-prepare the osteotomy and create directional change of the implant on insertion.

Figure 20-3. On the NobelActive implant the TiUnite surface covers the entire implant body, facilitating faster and stronger osteotmigration than with machined surfaces. The grooves on the collar are intended for both hard and soft tissue stabilization with improved long-term aesthetics. Grooves are designed on the implant threads, which allows for more rapid bone formation in the grooves with up to 30% increased stability.

NobelActive implants are indicated for all bone types and the following clinical procedures:

Carry out examination and treatment planning according to the routines of your practice. Bear in mind that in the majority of cases the implant’s special abilities reduce the need for an additional surgical procedure of bone augmentation prior to the implant placement session even in compromised situations. The implant can be stabilized in very little bone and bone augmentation can be carried out in the same session.

The amount of bone available for implant retention differs from site to site. The unique design features of the NobelActive implant allow it to be anchored and stabilized in as little as 3 mm of bone anywhere along the implant’s length (Figure 20-4). The thin layer of available bone can be at the implant’s apex as in a freshly extracted tooth socket or at the implant’s neck as in a sinus life situation.

Figure 20-4. Immediate stabilization of the NobelActive implants in wide sockets with minimal bone is possible due to the unique thread design and bone condensing capacity.

The implant is active, enabling an angle change/>