More than 20 years ago the National Institutes of Health held the Consensus Conference on Dental Implants1 that signaled the acceptance of implant treatment into the mainstream of U.S. dentistry. Today, dental implants are routinely offered as a treatment option for adults with missing teeth. Adequate treatment planning, good surgical technique, carefully developed prostheses, and good oral hygiene are necessary to achieve long-term success.2 Sinus lifts and bone grafts make the use of implants possible even for those patients without sufficient quantity or quality of bone. For children, replacement of missing teeth with dental implants is less common, more controversial, and subject to additional factors that affect success.

Children may be missing teeth due to decay, trauma, disease, and developmental or congenital conditions. Many of these children would gain social, psychological, and health benefits from placement and restoration of dental implants.3 There is no evidence to suggest that implants will not integrate into the jaws of growing children. Success would depend on the same factors that impact success for adults. However, the primary and overriding concern about implant therapy for children is skeletal and dental development. The two essential questions are whether, as the child grows, the implants will remain in a position to support a functional prosthesis and whether the implants and/or the prosthesis will affect the child’s growth and development in some negative manner. Clinicians considering implant therapy for children must understand the potential for problems associated with craniofacial growth. Treatment planning must incorporate the latest techniques for determining whether skeletal growth has ceased. In addition, clinicians need to address the need for exceptional parental and patient commitment to long-term treatment.

This chapter includes a brief description of craniofacial growth. Several excellent and detailed reviews of craniofacial and dentoalveolar growth are included in the references.

As transverse growth of the cranial base occurs, the midface expands. The midpalatal suture of the maxilla allows the midface to grow laterally in concert with the cranial base. Transverse growth of the maxilla accelerates at puberty. The average increase in maxillary bone width varies from 5-8 mm.4 Maxillary width changes occur primarily with eruption of the permanent teeth. Faster growth during puberty and a longer growth period result in adult males having greater maxillary width than adult females.

The mandible is projected downward and forward during growth and the chin becomes more pronounced, although it is actually a site of net resorption. The ramus is remodeled as a result of lingual and buccal cortical plate drift and permanent tooth eruption. The mandible lengthens primarily by growth of the condyle and posterior growth of the ascending ramus. Mandibular width increases mainly in the posterior. There is little change in the anterior mandibular arch after the onset of the adolescent growth spurt.

The mandible grows vertically by apposition at the dentoalveolar complex and growth at the condyle. In normal growth and development the mandible rotates minimally on a sagittal plane to maintain a normal inter-arch relationship. However, mandibles in individuals with long face or short face syndrome rotate considerably more.5 When more pronounced rotation occurs, eruption patterns are affected. An implant placed adjacent to one of the teeth in an abnormally rotating mandible would not move in concert with the mandible, inevitably leading to a negative relationship between the teeth and the implant. For example, in children with considerable rotation, the posterior teeth will continue to erupt to maintain the occlusal plane, but implants would not erupt and would be buried in the alveolar process.

In the developing jaw, osseointegrated implants react in much the same manner as an ankylosed primary tooth. Because they lack periodontal ligament they do not erupt or adapt to dental alveolar or facial growth.6 As development of the maxilla and mandible progresses, implants can become loose due to normal facial remodeling. They can also be vertically buried due to alveolar apposition. In addition, implants may not remain in appropriate and functional position relative to other teeth or oral structures as changes in the mandible and maxilla occur.

The consensus in the dental community seems to be that implant therapy should be recommended only in extraordinary cases for treatment of normally developing children who are missing teeth. For normally developing children other treatment options should be employed until skeletal craniofacial growth is complete. Chronological age is not a reliable measure of growth as there are huge differences in growth not only between the sexes but from one individual to another. Historically, several methods have been used to determine that growth has ceased. Cephalometric radiographs taken at least 6 months apart, eruption of second molars, radiographic analysis of the wrist, and the onset of menses have been used to determine whether growth has ceased. Assessment of mandibular growth based on cervical vertebrae maturation7 has gained acceptance. Results from analysis of cervical vertebrae maturation are consistent with results from radiographic studies of the ossification of the bones of the hand and wrist, for many years the standard for measurement of skeletal growth. Growth is considered to be complete when a radiograph shows that the second, third, and fourth cervical vertebrae have reached stage 4 of the 5-stage cervical growth maturation index.

For some children, especially those with severe oligodontia, the benefits associated with implant therapy outweigh the risks. Because these children have very few or no teeth, concerns about potential damage to existing dentition are minimal.8 Experience suggests that mandibular restorations supported by implants in the symphysis can be successful even in very young children. Similar positive long-term results have been reported in the literature. The author has not placed implants for permanent restoration in the maxilla because maxillary growth would most certainly lead to loosening or burial. Implants have been placed in the maxilla for temporary orthodontic anchorage but that is a separate topic not included in the scope of this chapter.

A 7-year-old male with oligodontia (severe hypodontia) was referred for examination and treatment. He appeared to be a well-developed, well-nourished first-grader. His parents reported that he was functioning at grade level in school. There was no significant family history related to the oligodontia. An extraoral exam revealed a lack of lip support and an asymmetry of the mandible with the chin point deviating to the patient’s right. The left side of the mandible was underdeveloped compared to the right. The prominent chin contributed to a concave facial form. The patient had a decrease in lower third facial height and a flat mandibular plane (Figure 24-1, A). The neurological examination indicated that all cranial nerves were intact. 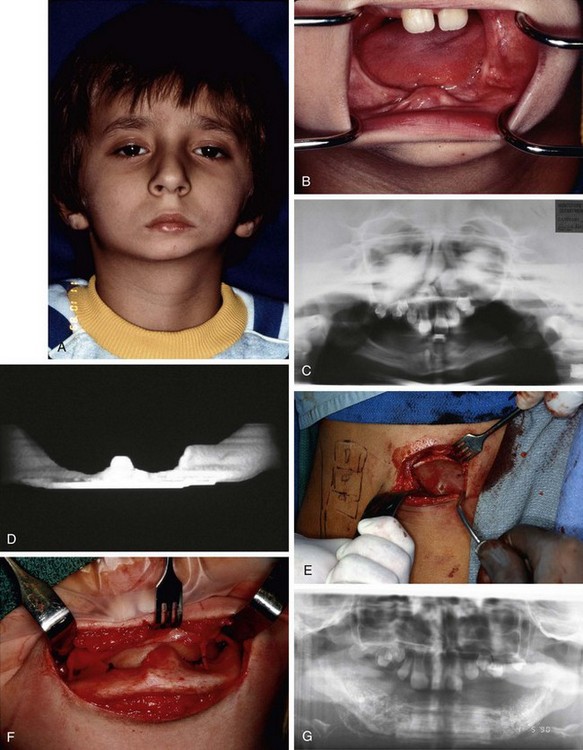 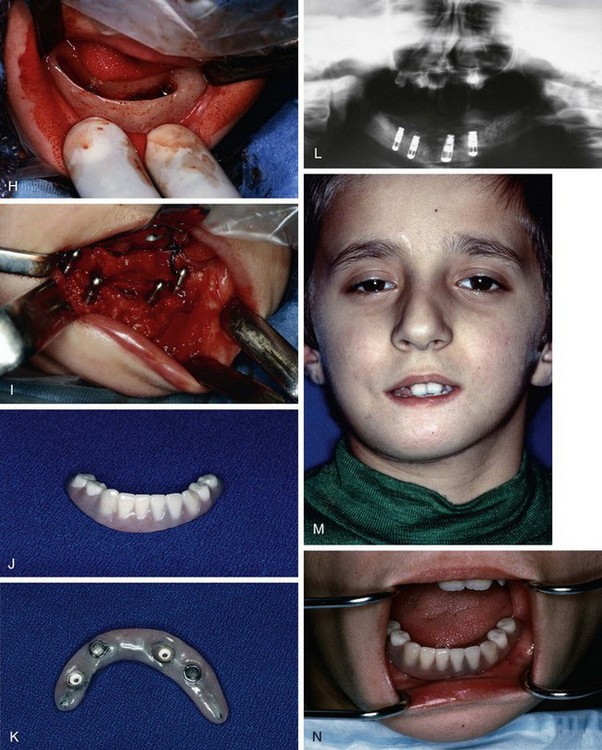 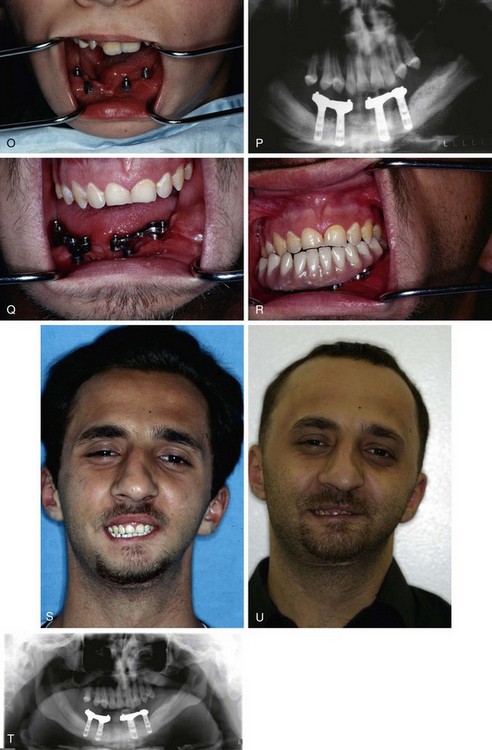 In the maxilla only two central incisors were visible; no teeth were visible in the mandible and no alveolar process was found when the mandible was palpated (Figure 24-1, B). A panoramic radiograph showed numerous tooth buds in the maxilla but a complete absence of alveolus and tooth buds in the mandible (Figure 24-1, C). A computed tomography (CT) scan showed development of the internal oblique ridges bilaterally and the presence of a genial tubercle; however, a distinct lack of an alveolar process was noted. Measurement at the symphysis revealed a bone height of 3 mm (Figure 24-1, D). After discussion with the patient and his parents, a treatment plan for reconstruction of his mandible was developed. The plan called for a mandibular bone graft, placement of four implants, and construction of a removable prosthesis.

The patient was taken to the operating room and a composite bone graft was performed to augment his mandible. Once the patient was under nasal endotracheal general anesthesia, he was placed in a prone position and the right posterior ilium was exposed. Cortical and cancellous bone was harvested from the right ilium (Figure 24-1, E). The surgical site was closed and a #7 Jackson-Pratt drain was placed. The patient was turned in a supine position to facilitate a submental extraoral approach to the mandible. The left and right bodies and the symphysis of the mandible were exposed; care was taken to preserve the mental nerves as they emerged from the mental foramen. A freeze-dried cadaver rib that had been reconstituted overnight was sectioned so a single laminate of the rib could be used as a vertical strut in support of the mandibular augmentation. The rib was secured to the lingual surface of the mandible with #2 vicryl sutures (Figure 24-1, F). Stainless steel wire was not used to avoid having dissimilar metals in contact when the implants were placed. With vertical height for augmentat/>

Tags: Dental Implants The Art and Science
Jan 7, 2015 | Posted by mrzezo in Implantology | Comments Off on 24: IMPLANTS FOR CHILDREN
Premium Wordpress Themes by UFO Themes
WordPress theme by UFO themes