The earliest possible restoration to achieve proper form and function is a hallmark of all surgical specialties. This principle underlies the concept for immediate loading of dental implants. The concept of immediate loading was applied in the very early stages of dental implants.1 The failure rate of the earliest trials of dental implants was high and often occurred shortly after attempts at functional loading. In some cases the complications arising from the early loading of dental implants were more severe than the indication for treatment.2 Despite these setbacks, many of the early attempts at implant placement were functional for long periods and provided the support for functional prostheses. Several factors contributed to the high early failure rates: metallurgic properties of implants had not yet been improved; the dental materials utilized, although proven compatible, lacked the necessary strength to support a prosthesis in function; and there was not yet a thorough understanding or the proper surgical and prosthetic techniques necessary for success.3–5

It was not until the 1940s that Bothe et al.6 experimented with the biocompatibility of titanium. Its use was not widely accepted until the 1950s, when documented support from Gottlieb and Leventhal7 and Clarke and Hickman8 showed the corrosion resistance and inert nature of titanium.9–11 Brånemark et al.12 in the 1960s demonstrated the ability of natural bone to accept implanted titanium during its remodeling stages, leading to the concept of osseointegration. This concept was initially conceived as a two-stage system in which the titanium implant was given a length of time to osseointegrate into the native bone without the stress of function.

Dr. Alvin Strock,13 a Boston oral and maxillofacial surgeon, placed an orthopedic bone screw into an immediate extraction socket of a periodontally involved tooth in the late 1930s. The placement of this implant became the foundation for the placement and restoration of a similar bone screw with the head prepared to receive a prosthetic crown in the following year.13 The implant and restoration survived for 18 years (Figure 21-1). Implants placed in the subsequent years varied in their sizes, shapes, materials, and placement techniques. One commonality they shared was the concept of immediate loading. These implants were placed and restored according to a one-stage surgical technique allowing for impressioning and rigid splinting of the implants at the time of initial surgery14–18 (Figure 21-2). After the documented success rates of two-stage surgical techniques in the 1960s the industry began to turn away from immediate loading. However, as the materials and science of dental implants progressed, a return to the restoration of immediate form and function was seen. Documentation of high success rates with immediately loaded dental implants then followed in the mid 1980s.19–24 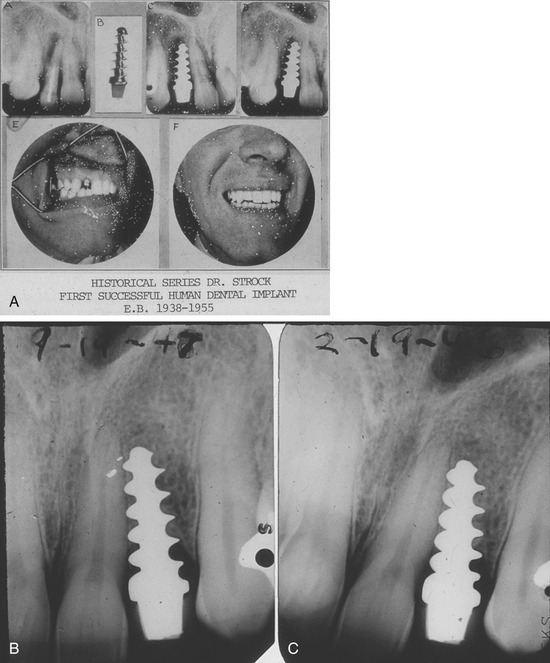 Figure 21-1. A, The first extraction and placement of endosseous bone screw followed by dental restoration. Periapical x-rays taken at 8 years (B) and 9 years (C) postrestoration. 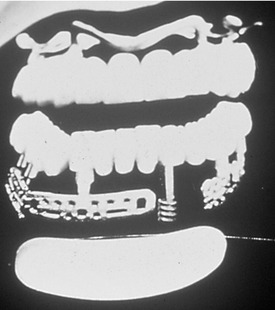 The scientific literature is rife with definitions of immediate loading of dental implants. Misch et al., in 2004,25 offered several classifications of implant loading:

These categories help to describe the timeframe of the restorative phase of implant surgery. In 2006, Wang et al.26 provided a definition based on a consensus from the International Congress of Oral Implantologists (Upper Montclair, NJ) in which immediate loading was described as a technique in which the implant supported restoration is placed into functional occlusal loading within 48 hours of implant insertion. Furthermore, a distinction was made between the immediate restoration for aesthetic purposes, in which the restoration was placed out of occlusal contacts, and true immediate loading (Figure 21-3).

Figure 21-3. A, Subperiosteal implant traditionally loaded after placement with fixed or removable prosthesis. B, TPS (titanium plasma sprayed) screw loaded within 12 to 24 hours after a bar is placed to rigidly connect implants. C, Transosseous implant inserted extraorally and loaded within 12 to 48 hours or allowed to integrate 3 to 6 weeks.

Several factors determine whether a patient is a candidate for immediate loading of his or her dental implants. These factors can be divided into four categories:

The surgical factors pertain primarily to implant stability and surgical technique. Host factors include not only bone quality and density but also proper healing environment. Implant factors are based on the structure and design of the implant system utilized, and occlusal factors relate to the importance of proper prosthetic design under occlusal forces.27

Of the factors related to surgical technique, the establishment of primary stability has been described as the single most important variable for success of immediately loaded implants.28–30 The transmission of micromotion to an implant body after placement can result in crestal bone loss and failure of osseointegration. It has been shown that micromotion must be limited to less than 100 nm to achieve implant-to-bone contact.31 Clinically, the torque during implant placement is a good predictor of implant stability. Studies have reported that implants placed with an insertion torque greater than 30-35 Ncm resulted in higher success rates for immediate loading.32–34 Additionally, to ensure adequate bone health and stability, proper implant placement technique includes copious irrigation both internally and externally to maintain temperatures less than 47° C for prevention of necrosis of the surrounding bone.

Host factors also contribute to the decision-making process for immediate loading of dental implants. The practitioner must take into account the patient’s medical history in evaluating candidacy for immediate loading, including tobacco use, oral hygiene, medications, and systemic diseases such as human immunodeficiency virus (HIV)/acquired immunodeficiency syndrome (AIDS), diabetes mellitus, and osteoporosis. The clinical history of the tooth to be replaced at the time of extraction should also be considered. Teeth associated with a history of trauma, infection, or periodontal disease with active inflammatory response may not be candidates for immediate implant placement or immediate loading. Radiographic and physical examination are also necessary for evaluation of bone quality and quantity.

The quality of bone often controls the prosthetic choices when immediate loading is considered. The need for bone grafting at the time of implant surgery may be necessary, depending on the anatomical variances of the patient’s bony anatomy. Bone quality can be described in many ways. The system proposed by Lekholm and Zarb35 places bone into four classifications based on the relative amounts of cortical and trabecular bone. In the first classification almost the entirety of bone is composed of compact cortical bone. In the second classification, compact trabecular bone is surrounded by a thick layer of cortical bone. The third classification is described as a thin layer of cortical bone encompassing high-density trabecular bone with favorable strength properties. Finally, in the fourth and least desirable bone type, a thin layer of compact bone surrounds loosely arranged trabecular bone. Higher failure rates have been reported in type IV bone for immediate loading of implants.36

With the growing marketplace for dental implants and the advent of new technologies, implant design principles can affect success of immediately loaded implants. The screw design type has been shown to have higher mechanical retention and greater ability to transfer compressive forces.37,38 Implant length and diameter—critical values for immediate loading—have yet to be defined; however, early reports have suggested that lengths greater than 10 mm provide dramatically higher success rates.39 Another factor of implant design that may contribute to success of immediate loading is surface texture. A variety of surface coatings and treatments are available and a multitude of studies have proven high success rates. A roughened implant surface clearly has shown improved success rates over its machined counterpart. Success rates on average of 91% were found when comparing the studies.40

The recommended occlusal scheme for immediately loaded implants is one of maximal interocclusal contacts without lateral contacts.26 Patients with parafunctional habits or compromised occlusion should not receive immediate loading options. Studies by Balshi and Wolfinger demonstrated that approximately 75% of failures with immediate loading occurred in patients with parafunctional habits. Additional studies have supported these results and suggest that these patients, if not excluded from immediate loading, must be strongly cautioned of the high risk for failure.41–43

Studies of implants placed in type IV bone with varying degrees of success.52,56 The soft tissue response was very favorable in these studies owing to the presence of a provisional crown throughout the healing phase,55 which allowed the sculpting of the interdental papilla and the attached gingiva. Comparable bone loss was seen with immediate loading versus the traditional two-stage surgeries.48,51 Some studies even showed a net gain of bone over a 5-year follow-up period.57 Given the recent advances and research in this area, long-term follow-up data are not yet available; however, the immediate loading of a single-tooth restoration is clearly a viable option for select patients. 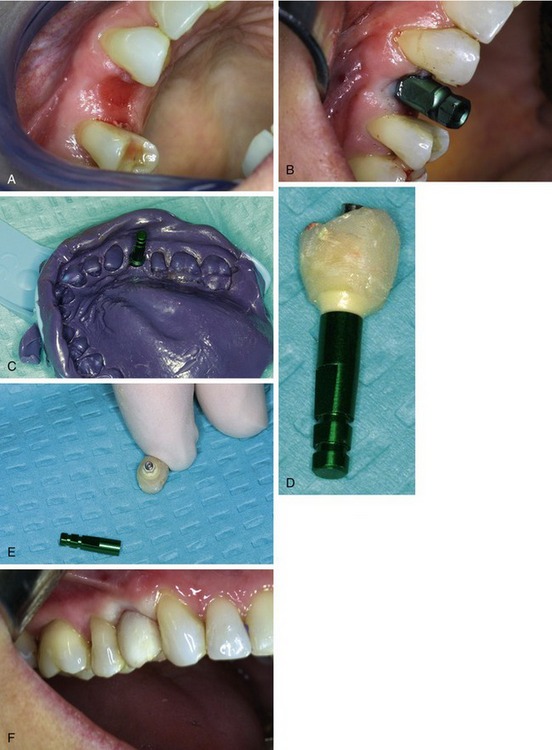 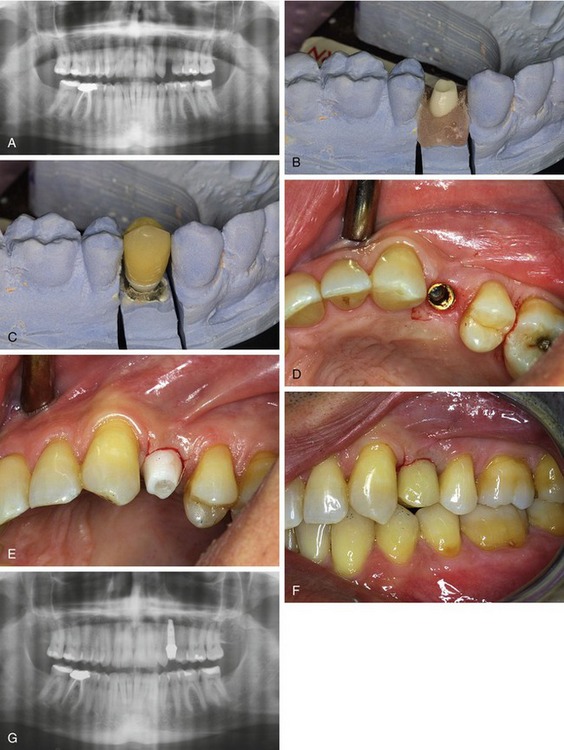