Salivary glands are composed of major and minor glands. The parotid glands (14–28 g) are the largest of the major salivary glands and are located in the preauricular region, along the posterior surface of the mandible. Although the lobes do not have distinctive separations, the parotid gland is divided by the facial nerve into a superficial lobe and a deep lobe. The superficial lobe is lateral to the nerve and the masseter muscle, whereas the deep lobe is medial to the nerve (Figure 2.1). This relationship is of outmost importance during surgery and will be discussed in detail in the following sections. The gland is located between the mastoid bone, stylomastoid process, ramus of the mandible, external acoustic meatus, and the glenoid fossa. The parotid duct—Stensen’s duct—originates at the anterior border of the gland. The duct travels with the transverse facial artery, passes anterior to the masseter muscle, and then pierces the buccinator muscle to enter the oral cavity opposite to the second maxillary molar.

FIGURE 2.1. The mass is being lifted off of the facial nerve, which can be observed at the tip of the hemostat. The mastoid has been drilled to expose the nerve, which would otherwise be difficult to expose because of the location and size of the mass. The parotid tissue can be viewed lateral to the nerve. Partial superficial parotidectomy has been employed, and the entire nerve has not been dissected out. (Courtesy of John R. Jacobs, MD, Wayne State University) 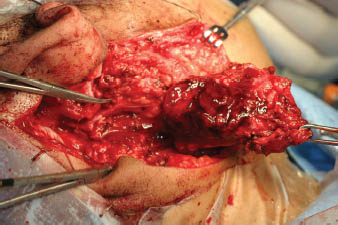 The second largest gland is the submandibular gland (7–8 g) located in the submandibular triangle. While the superior boundary is formed by the inferior edge of the mandible, the inferior boundaries are made up by the anterior and posterior bellies of the digastric muscle. The submandibular gland is accompanied by lymph nodes, facial artery and vein, and the lingual, hypoglossal, and mylohyoid nerves. The Wharton’s duct, which is approximately 4–5 cm long, empties lateral to the lingual frenulum through papilla in the floor of the mouth, on both sides of the frenulum.

The smallest major salivary gland, the sublingual gland (3 g), lies in the floor of mouth between the mucosa and the mylohyoid muscle. This gland does not have a true capsule and is medial to the mandible and genioglossus muscle. Several ducts from the superior portion of the gland either secrete directly into the floor of mouth or empty into the Bartholin’s duct, which accompanies the Wharton’s duct.

Approximately 600 to 1000 minor salivary glands are dispersed in the oral cavity and oropharynx. Each gland has a single duct that secretes directly into the oral cavity. They are found in the lips, gingiva, floor of the mouth, cheek, hard and soft palate, tongue, tonsils, oropharynx, larynx, and nasopharynx.

The most important diagnostic tool is a thorough history and physical examination. Imaging techniques play an important role in defining the extent and etiology of the disease. Imaging studies aid to define the intraglandular versus the extraglandular location of a tumor, to detect malignant features, and to assess local extension and invasion, nodal metastases, and systemic involvement. The suitable imaging technique is chosen according to the clinical picture.

Sialography relies on the injection of contrast medium into glandular ducts so that the pathway of salivary flow can be visualized by plain film radiographs. The most common indication is the presence of a calculus. Today, the use of sialographs in the clinical practice has significantly declined.

Despite being underutilized in the United States compared with Europe and Japan, ultrasound (US) is an ideal tool for initial assessment. Gritzmann (1989) reported that US was successful in defining space-occupying masses in all major salivary glands. In his study, which evaluated 302 tumors, US was able to differentiate correctly between malignant and benign lesions in 90% of the cases. It can differentiate easily between glandular and extraglandular masses and can detect the nodal status. However, it is not as useful in the delineation of deep parotid lobe masses because of the shielding effect of the mandible or of minor salivary gland lesions. Ultrasound can be used to guide fine needle aspiration biopsies from salivary gland masses.

Computed tomography (CT) is widely used in clinical practice and is generally the study of choice in the United States. CT is much more sensitive than sialography in picking up calculi as well as intrinsic and extrinsic masses. Although it cannot differentiate definitely between benign and malignant lesions, it can yield significant information that could lead the clinician toward a favored diagnosis. Malignant tumors tend to have irregular borders, infiltration into adjacent tissues, and possibly nodal spread. Low-grade malignant or benign tumors generally have regular, smooth borders and are well circumscribed. Usually, CT is accurate in differentiating deep parotid lobe tumors from other parapharyngeal masses. This distinction is important because it may change the surgical approach. Deep parotid lobe tumors displace the fat plane between the parotid and the pharyngeal constrictors medially, whereas parapharyngeal masses displace this plane laterally. The carotid artery may be displaced medially by deep lobe parotid tumors and the jugular vein by paragangliomas and schwannomas. Malignant lesions generally tend to destroy and infiltrate fascial planes.

Mandelblatt et al. (1987) reported magnetic resonance imaging (MRI) to be superior to CT in distinguishing the parotid gland from surrounding structures. In their series, MRI was also more useful in differentiating between deep lobe parotid tumors and other parapharyngeal masses. It provides useful information to differentiate between benign and malignant tumors. Malignant neoplasms have ill-defined borders and show infiltration, whereas benign lesions generally show discrete, well-defined borders. MRI is useful in evaluating the borders of a lesion and extension into surrounding tissues. The facial nerve cannot be visualized on CT but can be identified on thin section sagittal MR images.

The role of sintigraphy and positron emission tomography (PET) in the work-up of salivary gland tumors is limited. Warthin’s tumor and oncocytomas are radiopositive. In salivary gland tumors, FDG-PET shows low accuracy in distinguishing benign tumors from malignancies, as benign tumors such as pleomorphic adenoma and Warthin’s tumor also have a high glucose uptake. Integrated PET/CT has also been found to be poor in differentiating between benign and malignant tumors of the salivary glands. On the other hand, it can play an important role in the management of high-grade malignant tumors of salivary gland origin. Jeong et al. (2007) reported that the accuracy of PET/CT was higher than CT alone for predicting the tumor extent as well as the status of the lymph nodes in the neck. They found that with the use of PET/CT, the clinical management was modified in 43.2% of the patients, and they concluded that PET/CT provided accurate diagnostic information during the evaluation of high-grade salivary gland malignancies.

The differentiation of a benign lesion from a possible malignancy using imaging studies plays an important role not only in surgical planning but also in decision making for patients who may be poor surgical candidates. For example, an elderly patient with multiple comorbidities, who may have significant increase in mortality and morbidity during general anesthesia, may be observed in the li/>