During the past decade, extensive microbiologic, immunologic, and morphologic research studies have shown that any colonization of tooth surfaces by pathogenic bacteria – even transient or superficial colonization – triggers both humoral and cellular host defense responses, regardless of whether the bacterial challenge is incipient (acute) or progressive (chronic).

The breakdown of the complex host defense mechanism is usually temporary, but it destroys the host organism’s system of equilibrium, resulting in a disease process. From the endodontic perspective, this biologic equilibrium primarily concerns the balance between calcium and phosphate ion exchange during the continuous process of demineralization and remineralization of enamel and exposed dentin. As long as a disease process is reversible, as in the case of initial dental caries, the concepts of “progression” and “remission” exist. Clinical evidence of caries indicates that the acidogenic plaque bacteria are demineralizing more enamel than can be remineralized. In this sense, dental caries is rather a chronic destructive process. Irreversible forms of caries may develop during the superficial stage, with no prospect of remission.

Right: Low-power view of a histologic preparation showing an intact surface layer (10–30 μm thickness). It is sharply demarcated from the body of the lesion. This region also exhibits a clearly reduced mineral content. Relatively large and also small micropores within the adjacent dark zone. Note the initial structural alterations caused by the carious process in the translucent zone.

Left: Clinical appearance of a “brown spot” lesion with cavitation.

Right: The superficial layer is no longer intact. The body of the lesion penetrates the enamel, exhibiting initial dental caries.

2.3 Extension of the carious process

Left: Histologic section through the margin of the lesion also reveals extension of the carious process into the dentin (ultraviolet [UV] light).

Right: Ground section through the center of the lesion reveals clear involvement of the dentin.

The odontoblastic processes in the upper layers of carious dentin exhibit splayed ends, with membranous fragments within the lumen of the tubule. In this area, there are also large numbers of bacteria (Yamada et al., 1983). If a superficial carious lesion is chronic in nature, in addition to the shrinking odontoblastic border, a small amount of reparative dentin formation will be seen. 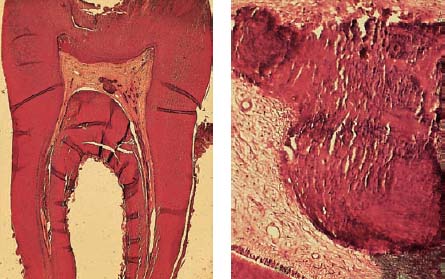 Right: Pulp stones with fibrodentin (atubular dentin), which have been laid down by pulpoblasts (odontblast-like cells) sited away from the center of the pulp as a result of the pathologic irritation. 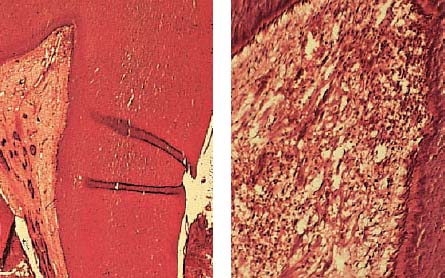 Left: Within the pulp horn, there is no accumulation of hard tissue, and endotoxins can penetrate unhindered into the pulpal tissues.

Right: At the deepest point of the carious lesion, there is obvious disintegration of the odontoblastic layer, and the subjacent capillary plexus is also disrupted, often appearing only as capillary fragments. Lysosomal enzymes induce endothelial cell necrosis, increased vascular permeability, and obvious extravascular edema. 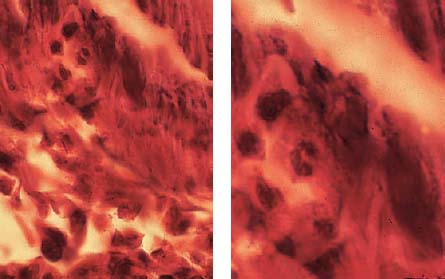 While bacteria penetrate the dentinal tubules from the coronal aspect, from the pulpal aspect neutrophilic granulocytes migrate into adjacent tubular orifices, where they release tissue-destroying enzymes.

Carious Exposure of the Pulp–“Pulpitis aperta”

If the pulp is exposed by the carious process, an electron photomicrograph will show a large number of dead and necrotic cells within the pulpal tissues. Adjacent to the foci of necrosis will be lymphocytes, plasma cells, and macrophages. Polymorphonuclear leukocytes predominate near the site of exposure, some of which are intact and others partially destroyed, with their organelles scattered in the extracellular matrix.

Micro-organisms are found within the neutrophilic granulocytes and macrophages. The endothelial cells of the vascular elements are also damaged, and leukocytes are released from vessels.

If the carious process results in deep dentinal cavities, inflammation of endodontium occurs within a week, the odontoblastic layer is destroyed and the pulp is infiltrated by neutrophilic granulocytes. Bacteria, necrosis, and cellular destruction occur and reparative (secondary) dentin formation is limited. The injection of a bacterial extract into an open pulp chamber elicits local abscess formation with resorption of bone, cement, and dentin (Stabholz and Sela, 1983). 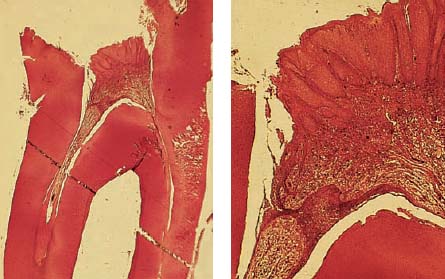 Left: Dentin has been penetrated by caries, and bacteria have reached the pulp, resulting in massive accumulation of inflammatory cells. Granulation tissue sprouts the ulcerated pulpal surface and protrudes through the coronal opening.

Right: The coronal pulpal tissue has epithelialized, and consists primarily of dense connective tissue. It is rich in collagen fibers, with relatively poor vascularity, and contains numerous nerve fibers that extend into the epithelium, as well as areas of persistent chronic inflammatory infiltration. 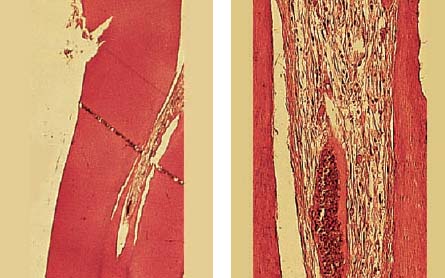 2.8 Necrosis of the radicular pulpal tissues

Left: Bacterial infiltration of the coronal pulpal tissues leads to necrosis and tissue destruction. Note the accumulation of polymorphonuclear leukocytes at the root canal orifice, which are differentiated from the mononuclear leukocytes. Granulation tissue is also obvious in the periapical region.

Right: The coronal third of the root canal shows infiltration of inflammatory cells with tissue destruction as well as destruction of the odontoblastic layer. 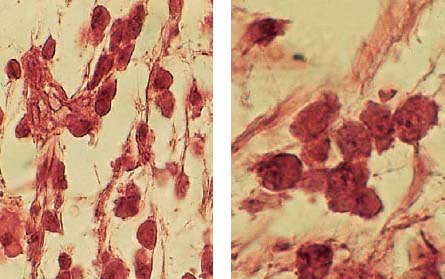 The inflammatory infiltrate is dominated by monocytes. In addition to lymphocytes, plasma cells can also be seen; the presence of these cells indicates a local immune reaction.

As bacteria penetrate into the dentinal tubules, neutrophilic granulocytes within the pulp migrate toward the orifices of the tubules and engage the bacteria. This process releases lysosomal enzymes and leads to destruction of the pulpal tissues. During the course of the subsequent phagocytosis of the destroyed tissues by polymorphonuclear or mononuclear phagocytes, the cell debris disintegrates, leading to the release of more lysosomal enzymes and further tissue destruction and chemotactic attraction of additional inflammatory cells.

The toxic substances that lead to enhancement of the inflammatory reaction include bacteria, their metabolic by-products, their breakdown products, and finally also the breakdown products of the affected dentin. At this point of the process, a “vicious circle” ensues, manifested by an irreversible pulpitis (Langeland, 1981). Pulp regions near to the necrotic areas are filled with neutrophilic granulocytes that phagocytize the bacteria. This process leads ultimately to the dissolution of entire segments of the pulpal tissue and proceeds in an apical direction (Lin et al., 1984).

Left: Advanced caries in the dentin has reached the pulpal tissue under the occlusal fissure, causing circumscribed pulpal inflammation.

Middle: Death of odontoblasts without formation of reparative dentin, and inflammatory cell infiltration into the adjacent pulpal tissue.

Right: Penetration of bacteria within the dentinal tubules with chemotactic attraction of neutrophilic granulocytes. “Empty spaces” in the subodontoblastic layer represent micronecrotic areas with pus formation and accumulation of polymorphonuclear leukocytes. 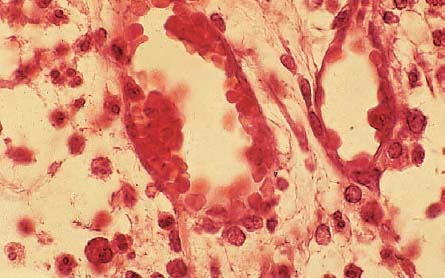 The area opposite the carious destruction of the odontoblastic layer is dominated by neutrophilic granulocytes, which can be identified peripherally and also intravascularly, an expression of a persistent chemotactic irritation. Larger “empty spaces” represent the beginning of tissue necrosis. 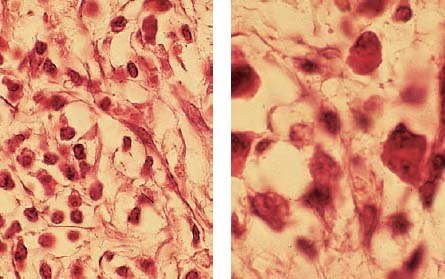 Right: The adjacent tissue exhibits plasma cells and lymphocytes, which can secrete lymphokines as well as other substances. Both migration-inhibiting factors as well as macrophages and dentinoclast-activating factors can be observed. As true lymphotoxins, these factors can also directly induce tissue destruction.

It has also been observed that irreversible pulpitis with pulpal necrosis is often accompanied by swelling of the apical periodontal ligament space. The cause for this early periapical reaction appears to be penetration of toxins through intact radicular pulpal tissues. Gram-negative bacteria with external membranes that release endotoxin can elicit a complement reaction. The activation of complement causes release of biologically active peptides, resulting in an increase in vascular permeability and aggregation of neutrophilic granulocytes and macrophages.

Left: The low-power histologic section reveals the progress of the carious process and an area of incipient inflammation within the coronal pulp. The root canal pulp is vital and free of inflammation.

Right: A single area of calcification is visible within the root/>