In the past, oral health-care practitioners might have expected to encounter one life-threatening situation among their patients during years of practice. With advances in medicine, and the prevalence of dental disease in a geriatric patient population, the clinician may now be called on more often to provide dental care to medically and/or pharmacologically compromised patients. Being ill-prepared for such eventualities is inexcusable. Being the subject of public censure or accused of negligence in the office is an agony best prevented. Assessment of the patient and recognition of actual or potential problems are imperative in initiating proper treatment and/or summoning proper help. A system of patient classification adopted by the American Society of Anesthesiologists (Table 2-1), with the primary purpose of quickly and easily placing each patient in an appropriate risk category, can provide guidelines for the course of patient management. This classification must be made during the physical evaluation of the patient before any dental treatment is initiated.

Consequently, oral health-care providers must be able to recognize high-risk patients and initiate immediate correction of life-threatening problems. Although there are a number of techniques available for maintaining life in emergency situations, many require sophisticated devices and valuable time that the patient simply may not have. Oral health-care providers must know how to sustain life with no more than their hands, their breath, a few basic supplies and therapeutic agents, and a great deal of common sense.

Being Prepared for Medical Emergencies

Patient evaluation procedures in emergency medicine consist of a primary survey and a secondary survey. The primary survey is concerned with the identification of those life-threatening emergencies (respiratory arrest, cardiac arrest, profuse bleeding) that require immediate attention. The most important examination sign is respiration. The patient’s airway must be open and breathing must be spontaneous. In cases of respiratory arrest, artificial ventilation should be started. Should the patient be in cardiac arrest, cardiopulmonary resuscitation should be initiated. The primary survey also considers profuse bleeding. Attempt to control all serious bleeding by direct pressure.

The basic emergency procedures include five fundamental steps that should be taken immediately in every emergency as appropriate:

Specific emergencies will require the additional steps listed under the emergency situation. 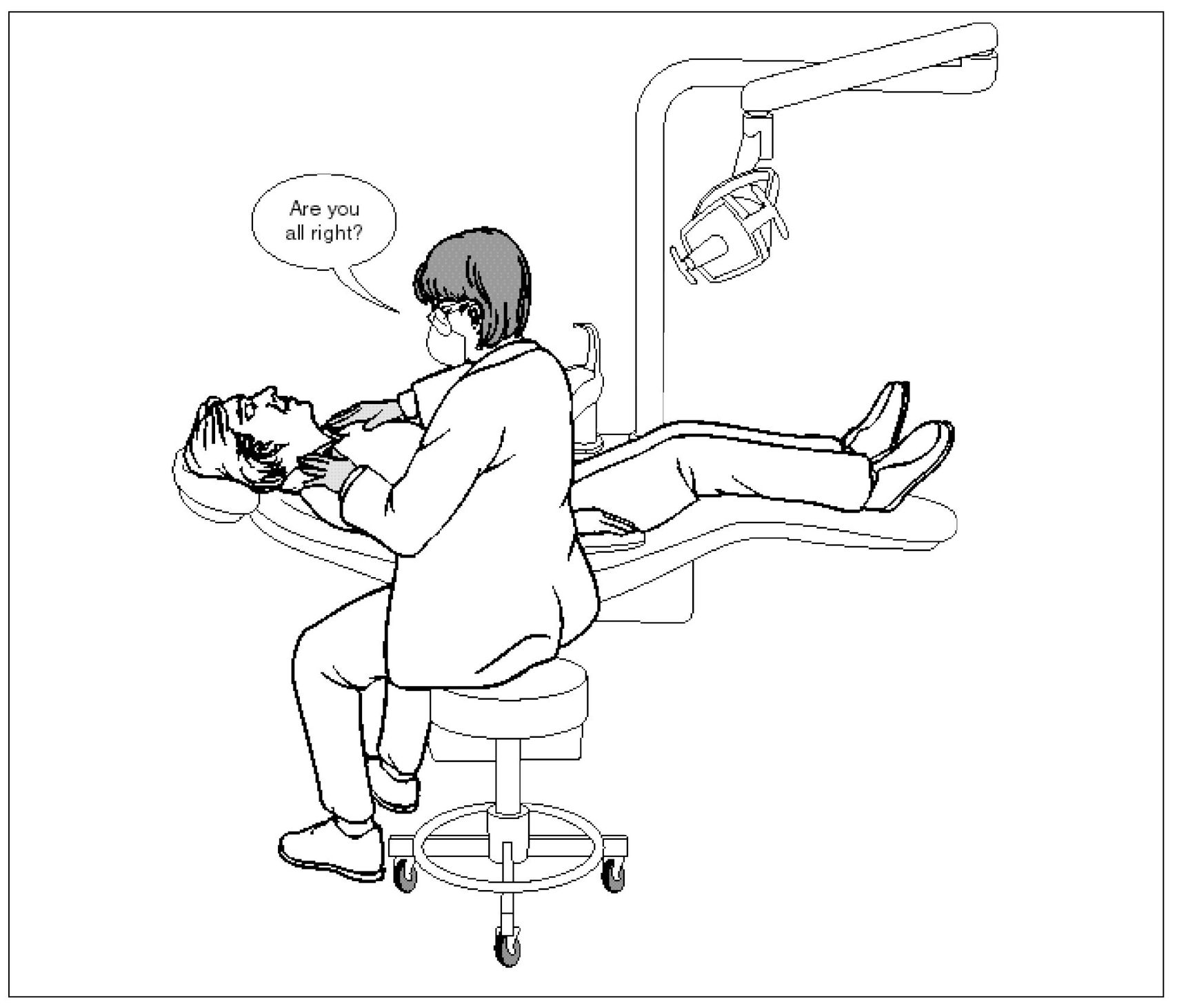 Be sure that the patient has an unobstructed airway 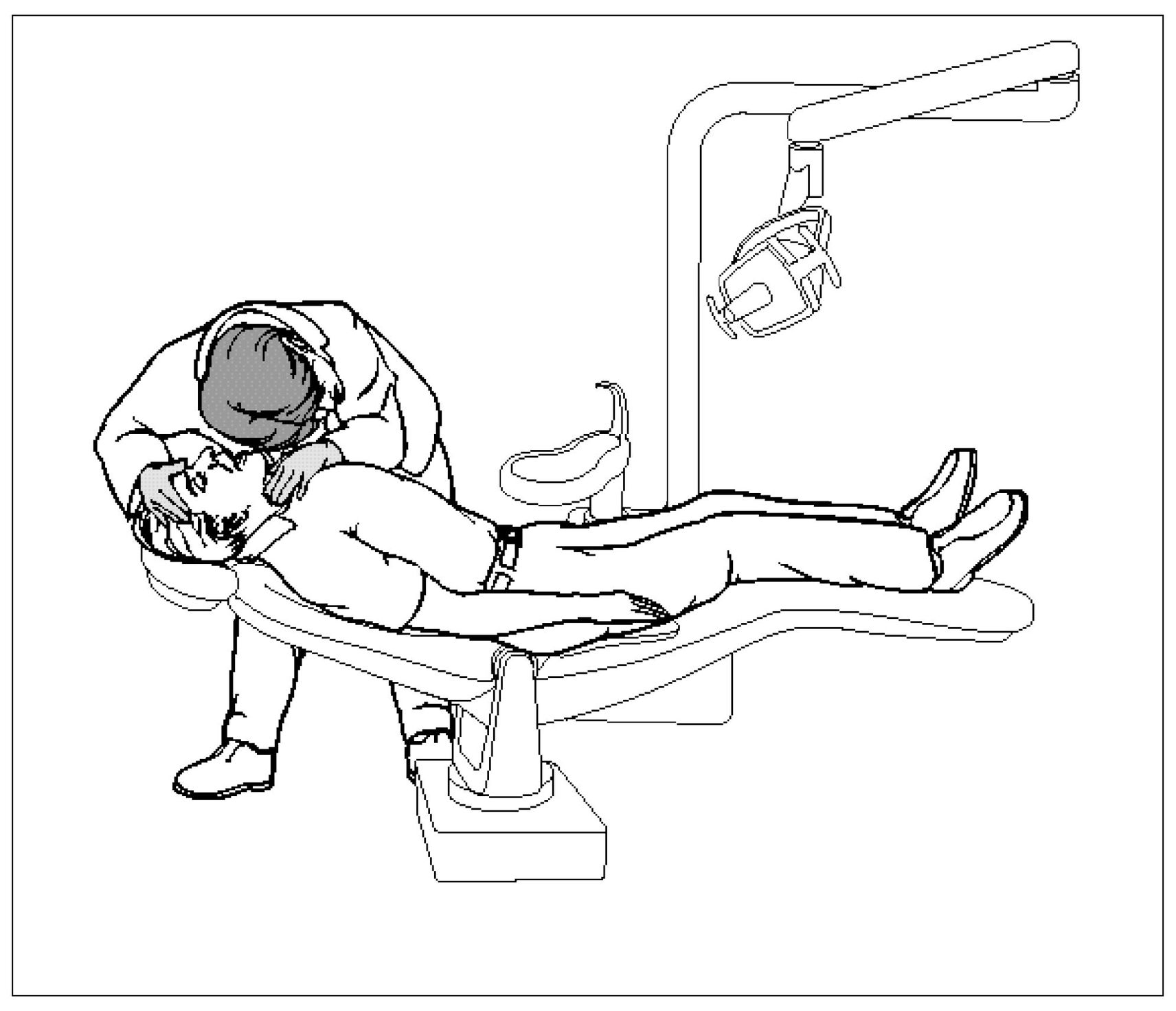 Check the pulse rate and character

Use the index and middle fingers to palpate the radial pulse. Count the pulse beats for 15 seconds and multiply this rate by four to get the pulse beats per minute. The character of the pulse should be regular and full. 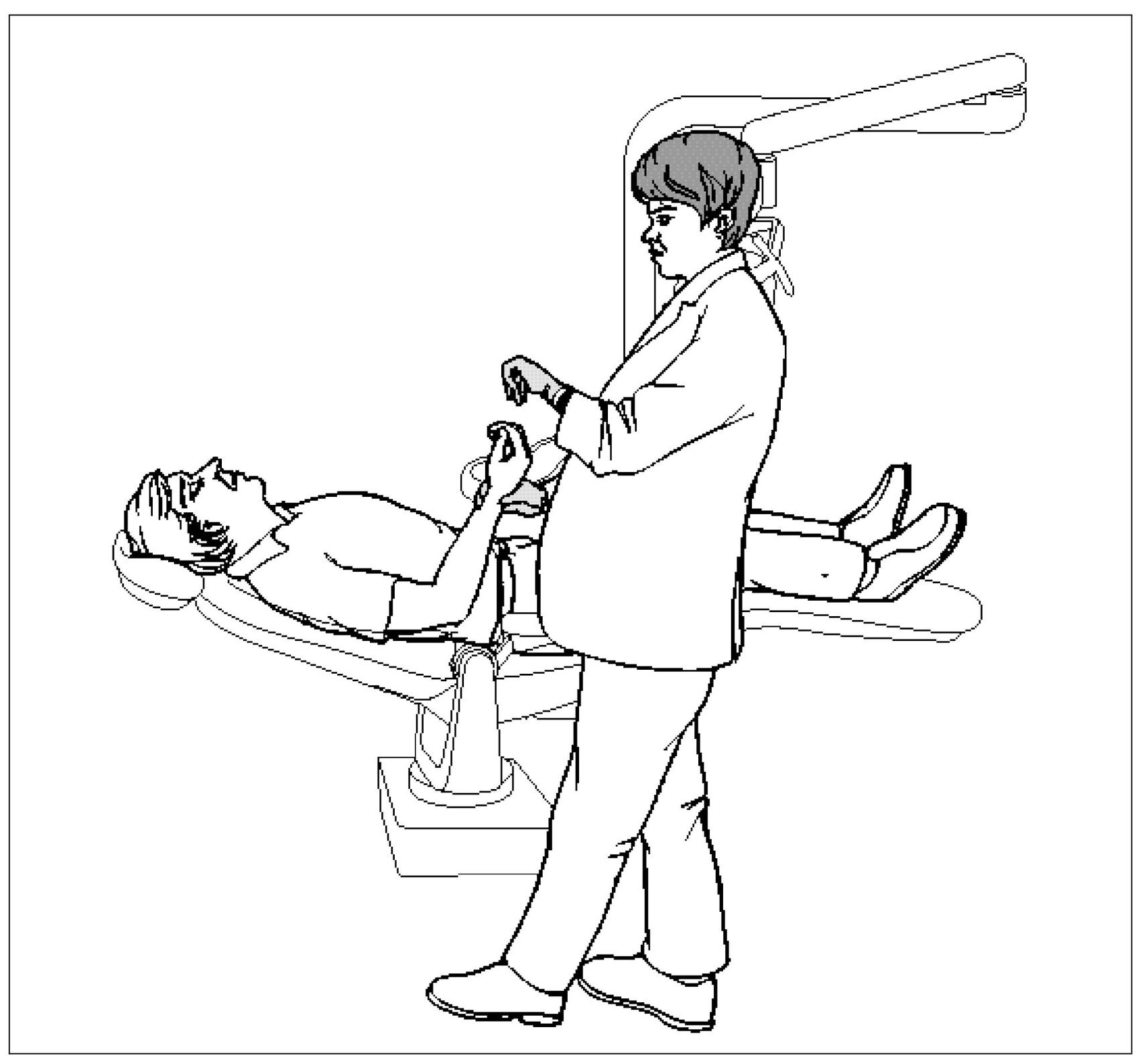 Place the blood pressure cuff on the patient’s arm and with the help of a stethoscope determine both the systolic and diastolic pressure of the patient. 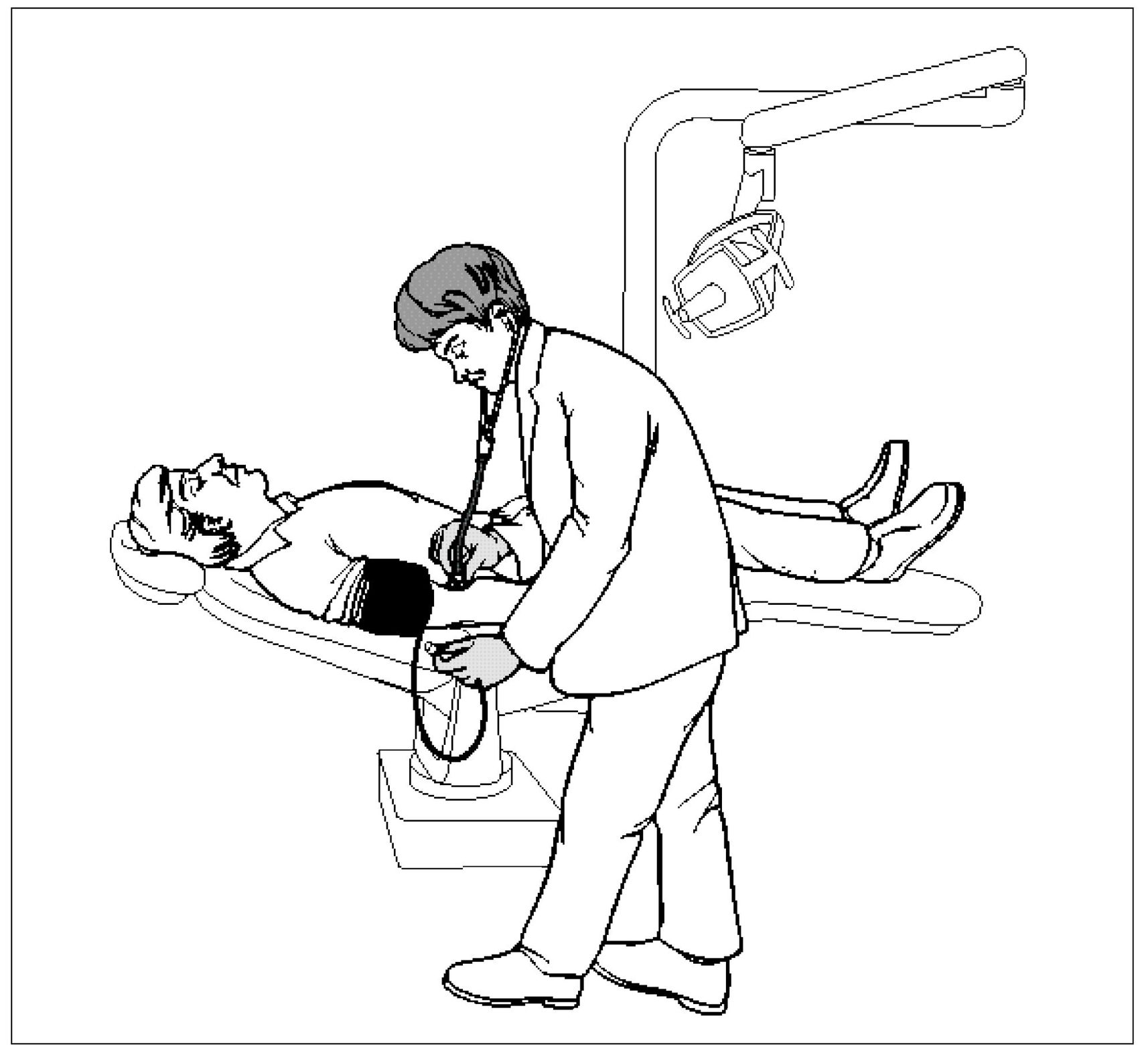 Monitor the rate and character of respiration

Count the number of breaths the patient takes in 15 seconds and multiply by four to determine the rate per minute. Determine the rhythm (regular or irregular) and depth (deep or shallow) of the respirations. 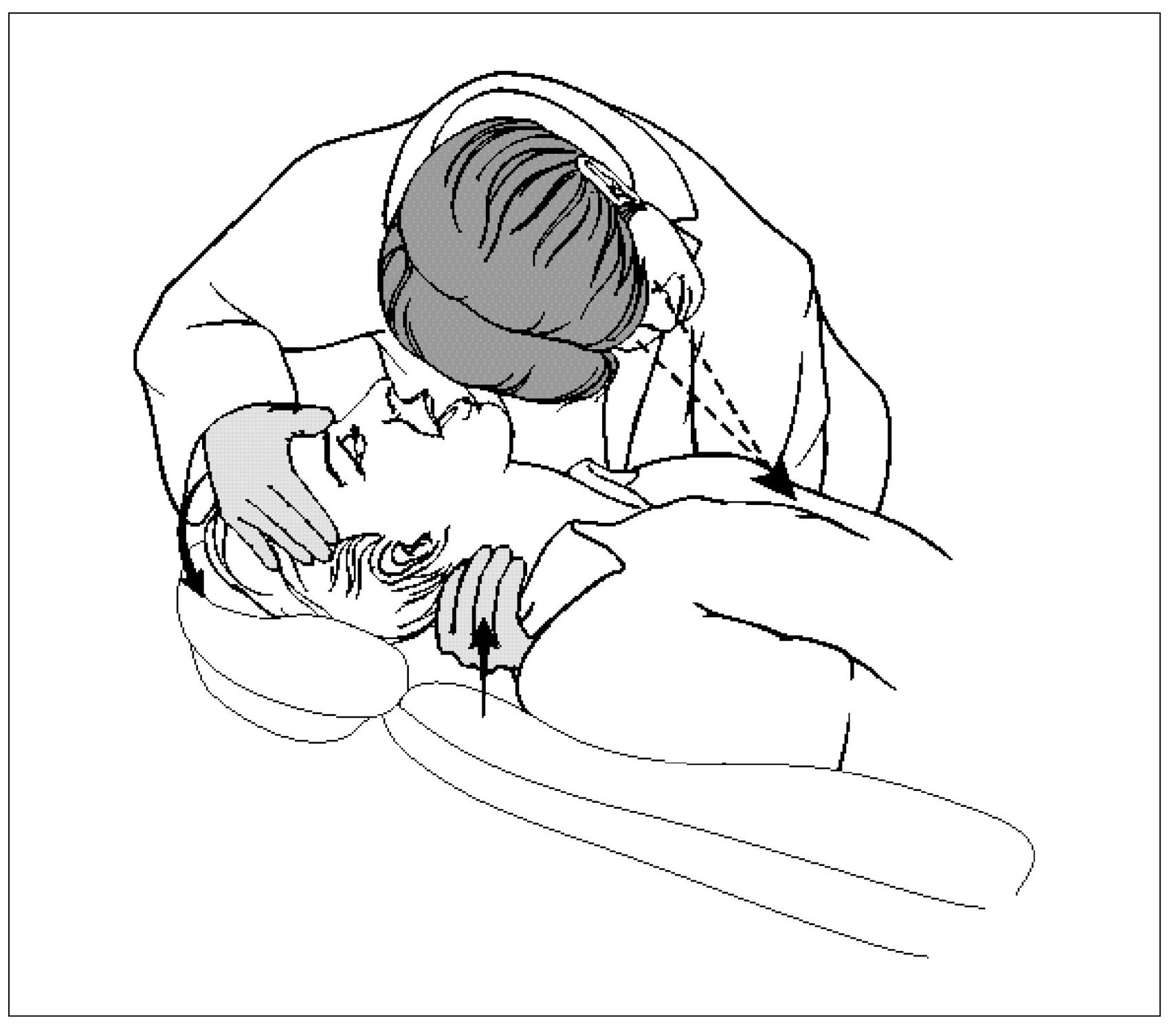 The unconscious patient must be positioned correctly for further assessment and care. Place the patient in an extended supine (face-up) position on a fixed, level, hard surface to allow for efficient compression of the chest should external cardiac compression be necessary. 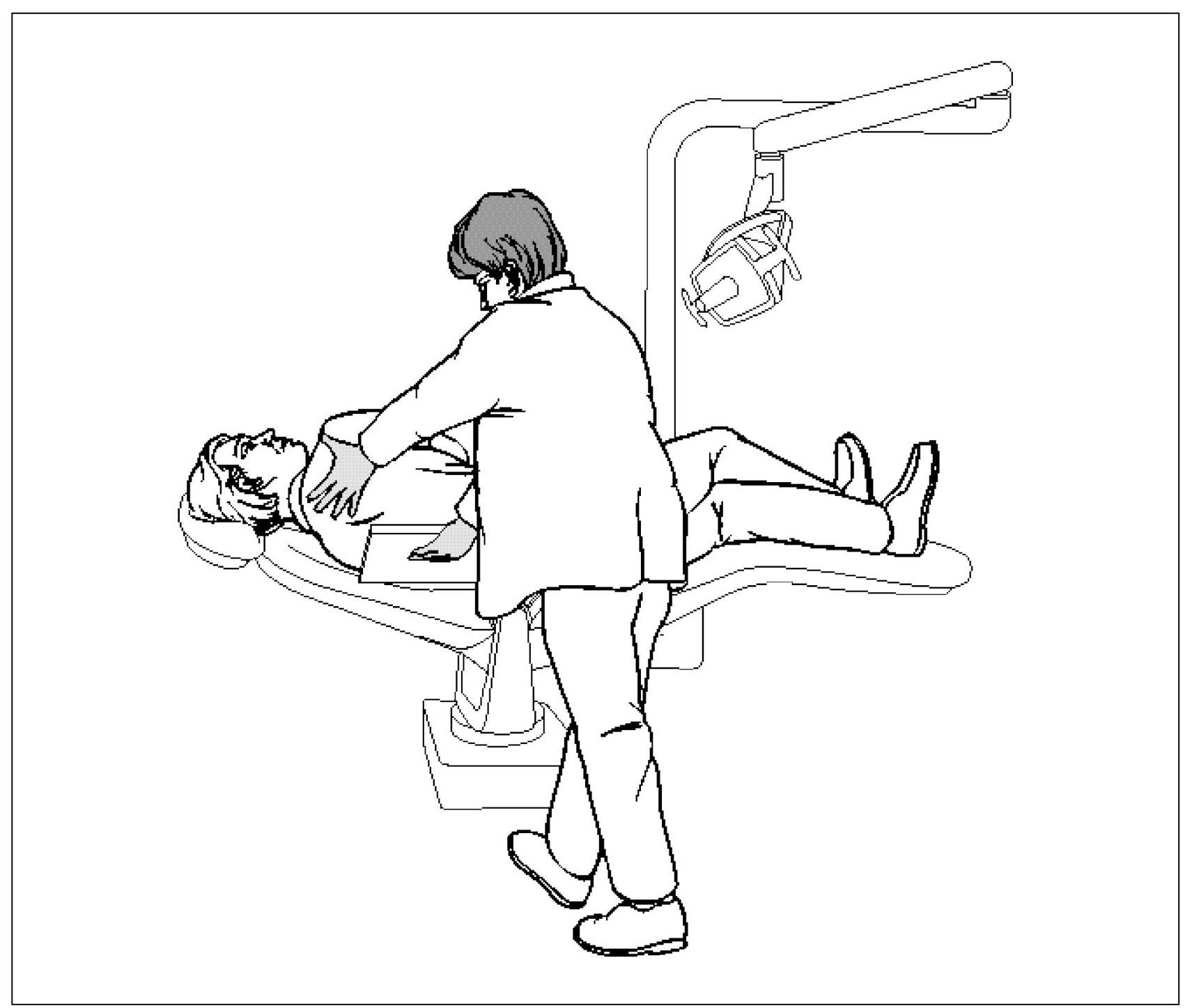 Establish and maintain an open airway

With unconsciousness, the tongue falls posteriorly and may obstruct the airway. Opening and maintaining the airway is best achieved by extending the patient’s neck with one hand while pressing down on the forehead with the other hand. 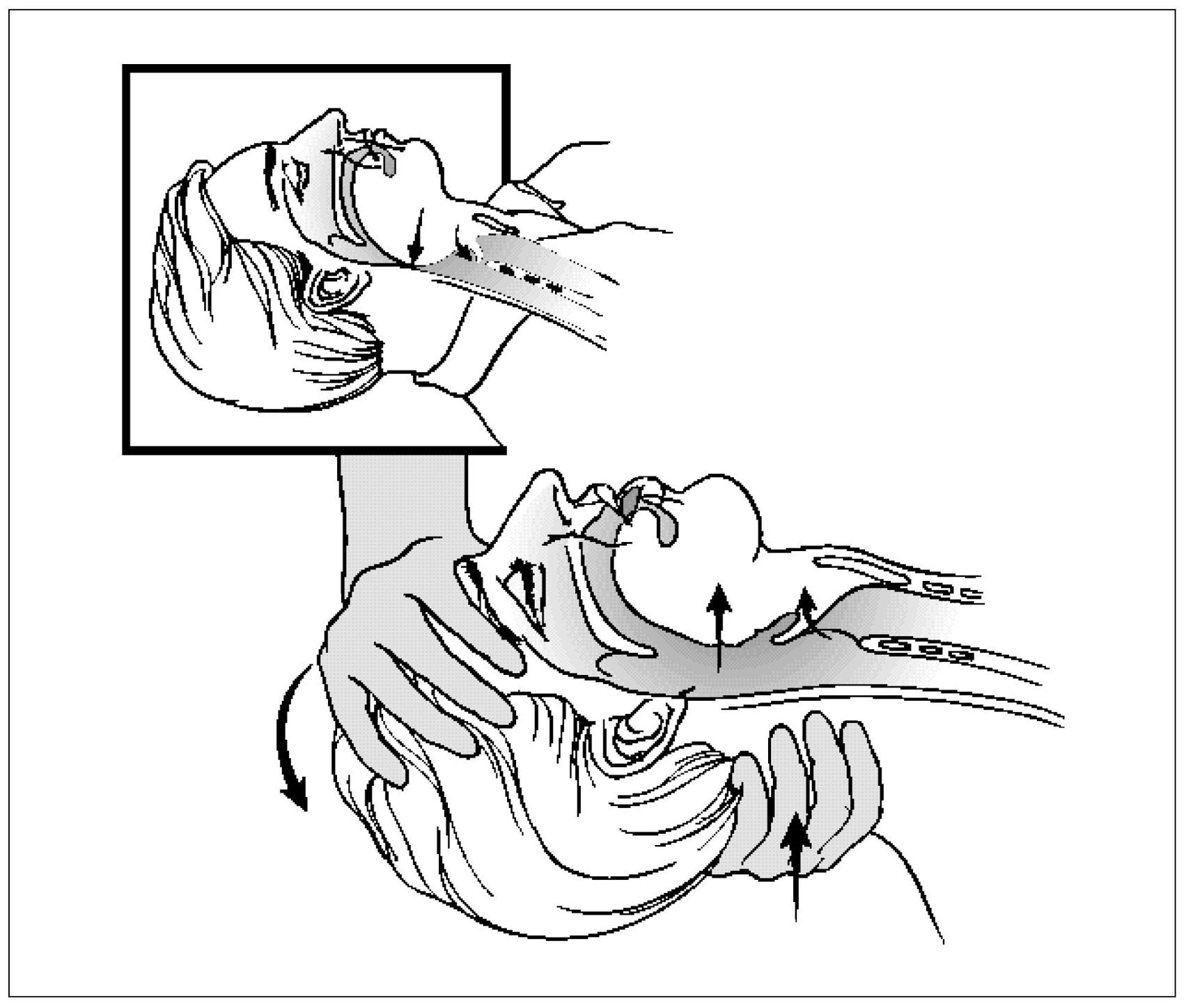 Spontaneous ventilation is accompanied by chest movement associated with airflow at the mouth. Put one ear close to the patient’s mouth, and listen for breath sounds. Feel with the cheek for exhaled air, and look to see if the chest rises and falls. Spend at least 5 seconds checking for breathing before concluding its presence or absence. If spontaneous ventilation is occurring, go to Step 6e. 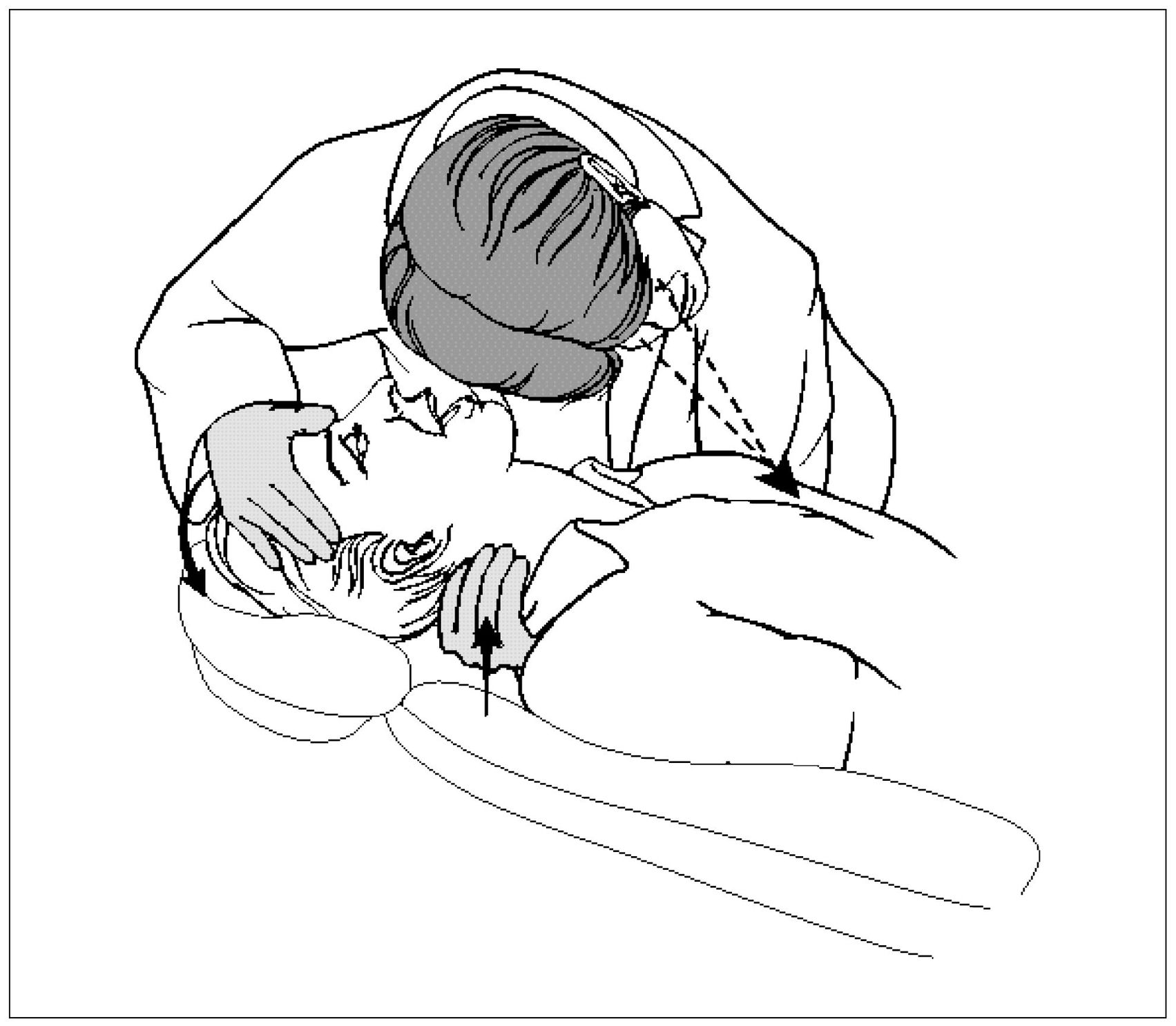 If there are no signs of breathing, begin ventilation immediately. A picket mask will provide barrier protection for the user. To provide positive pressure ventilation through the mouth, the nasal air passage must be closed. With the hand pressing down on the patient’s forehead, pinch the patient’s nostrils closed with the thumb and the index finger. Give 2 full breaths in rapid succession. Watch the chest for movement, and listen and feel for exhalation. 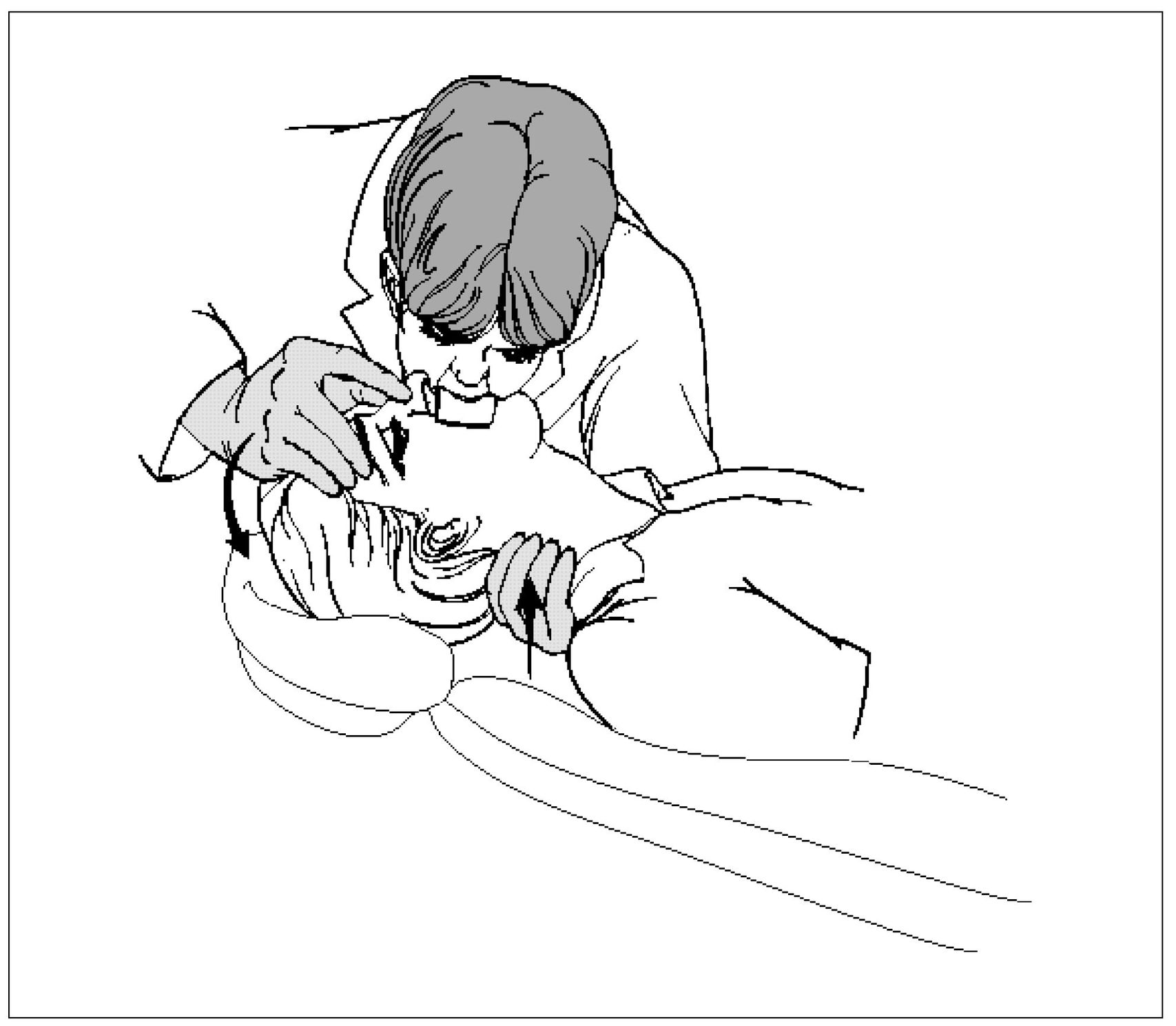 Find the carotid artery by palpating the Adam’s apple (larynx), and slide the fingers laterally over the neck to the carotid groove, just anterior to the sternocleidomastoid muscle, where the pulse may be felt. Spend at least 5 seconds feeling for the carotid pulse before concluding its presence or absence. If there is a pulse but the patient is not breathing, maintain ventilation by giving one breath every 5 seconds (12 per minute). If the patient is apneic and pulseless, proceed to Step 6f. 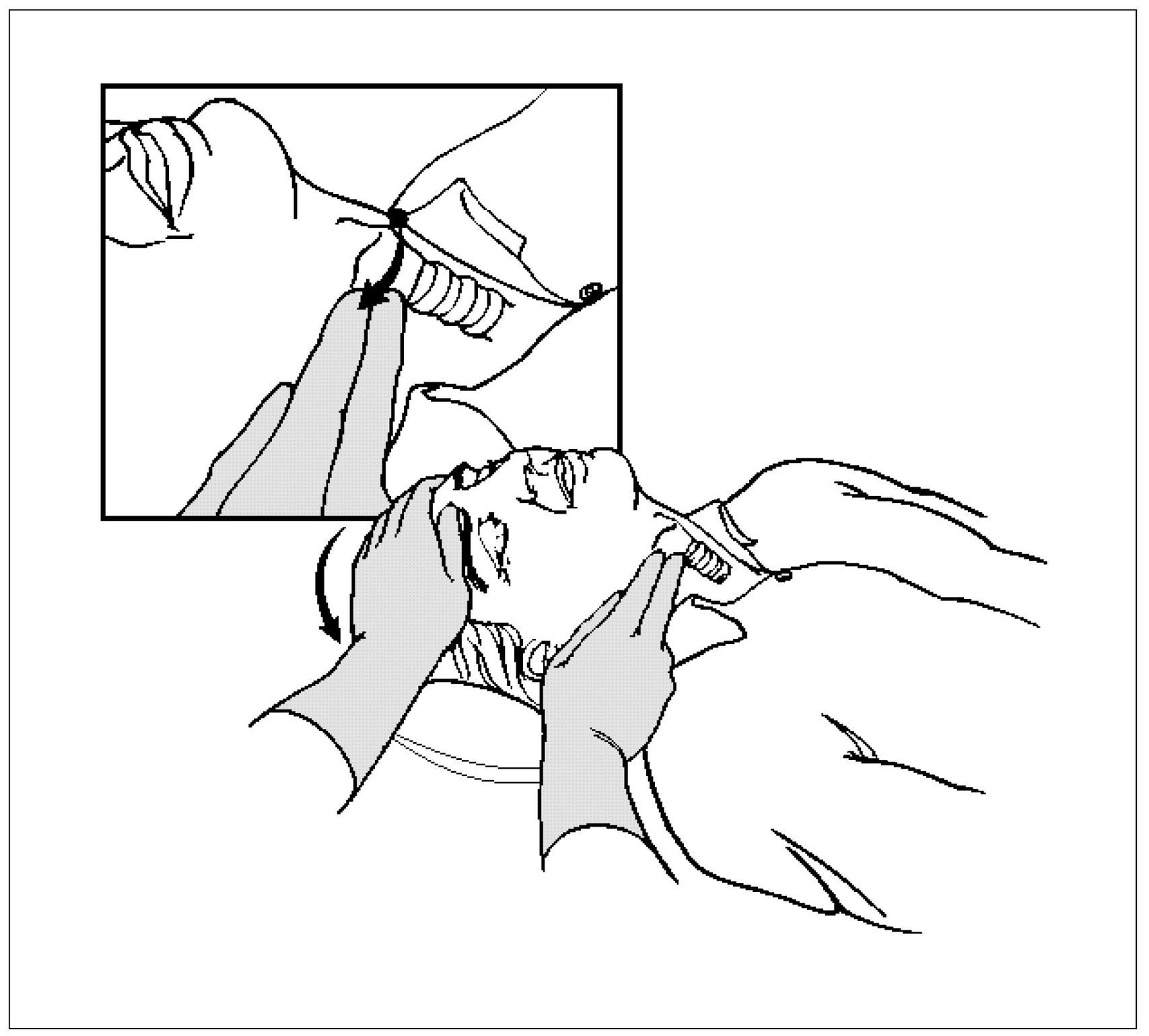 Locate the lower (caudal) end of the rib cage with the middle finger, and slide the finger up the costal margin to the point where the ribs meet (xiphisternal notch). The heel of the other hand should be placed on the sternum 2 finger breadths above the xiphisternal notch. Once the landmark is located and the heel of one hand is in the correct position, place the other hand directly on top of the first. The fingers may be linked or extended but should not touch the chest; only the heel of the hand should be in contact with the sternum. 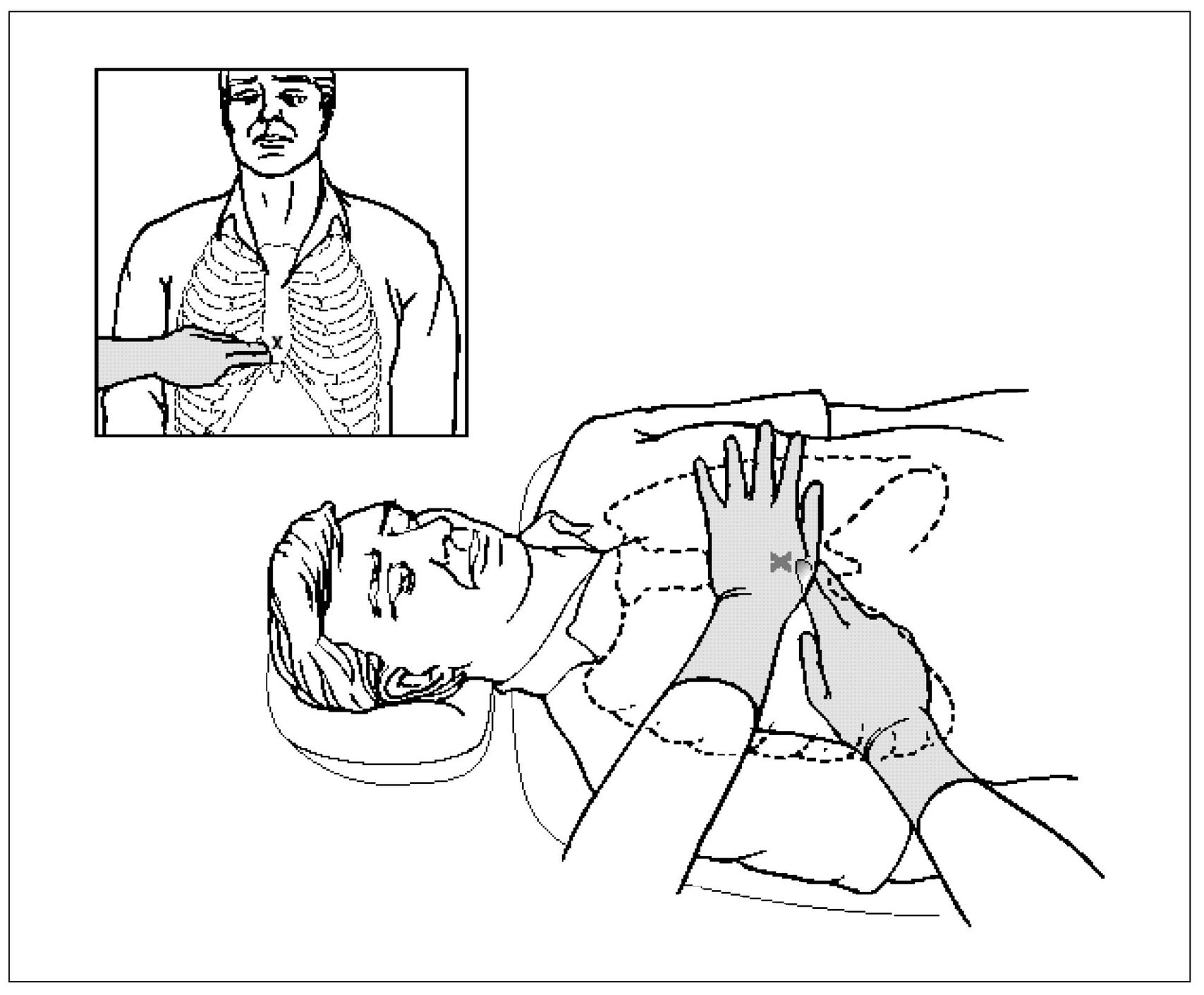 The rescuer should be positioned close to the patient’s body, elbows held straight and locked, and shoulders above the hands. The adult patient’s sternum is compressed 1.5 to 2 inches (4 to 5 cm) at a rate of 80 compressions per minute. A single rescuer must stop after 15 compressions, establish an open airway, and deliver 2 quick, full breaths in seconds. The rescuer should then find the proper landmark and continue closed chest compressions. 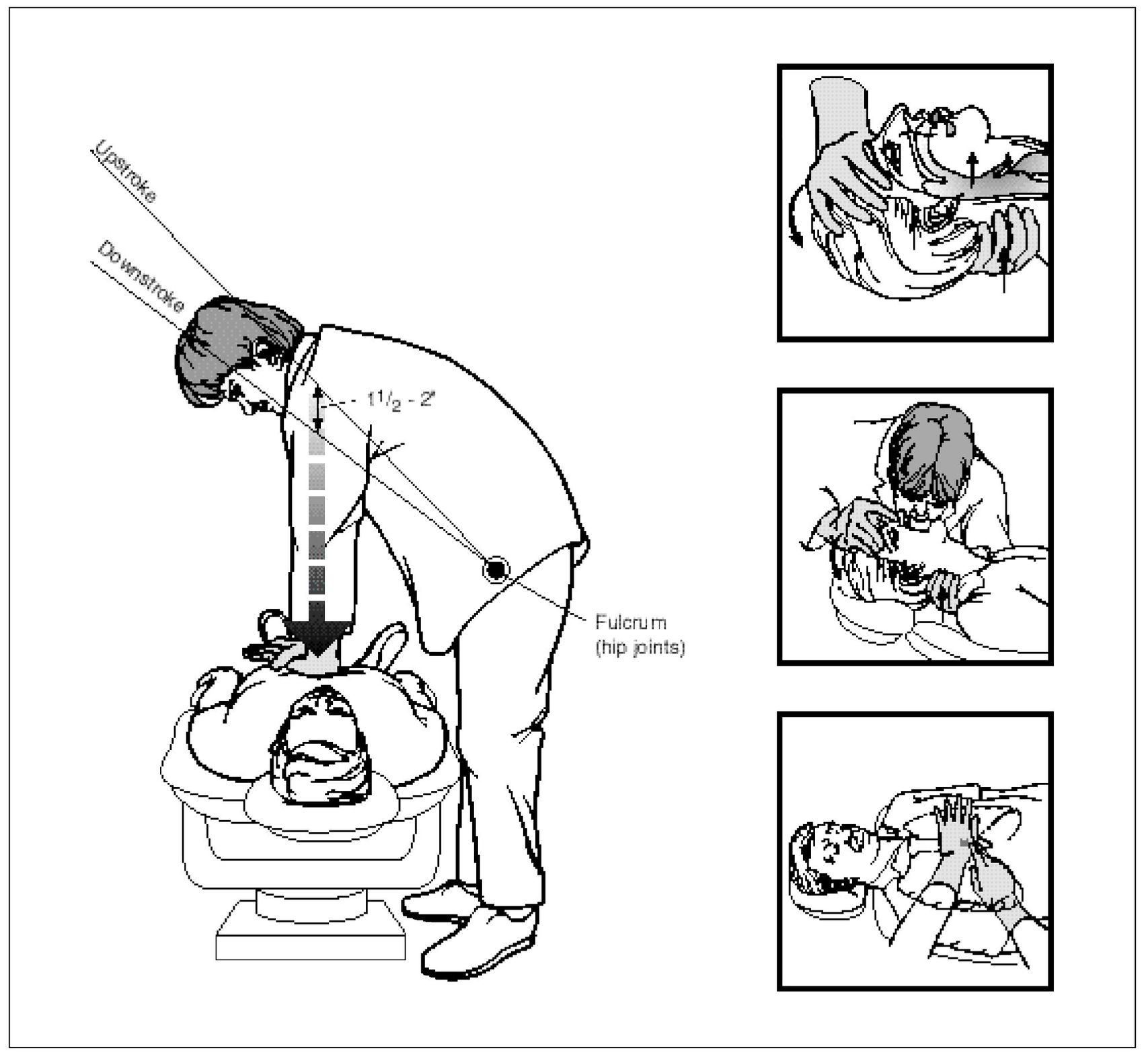 After 4 compression-ventilation cycles, the carotid pulse should be palpated. Reevaluate circulation every few minutes thereafter to determine if an effective heartbeat has returned. 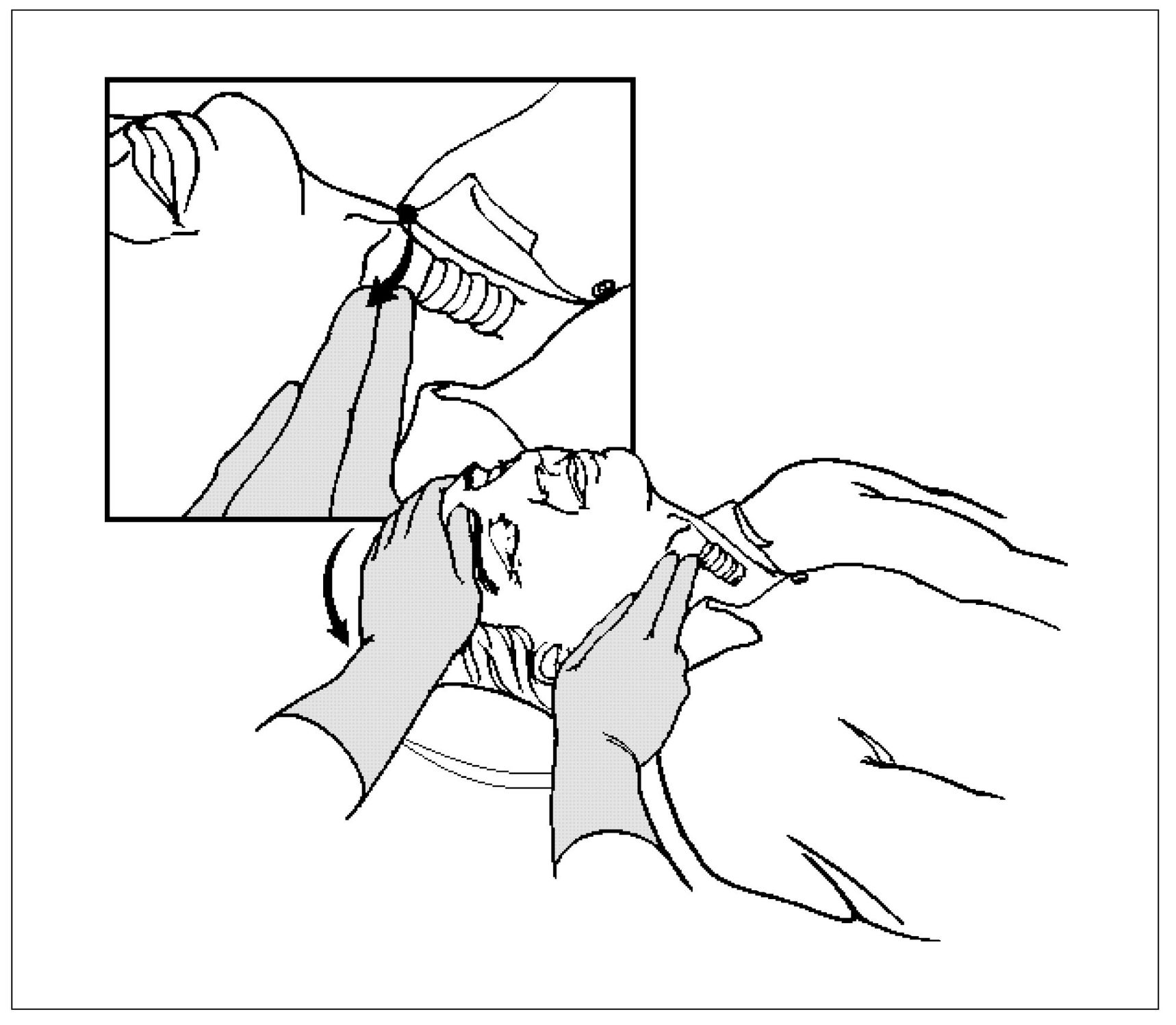 Syncope is characterized by a sudden and brief loss of consciousness. The cause is reversible disturbances in cerebral function resulting from decreased cerebral blood flow. Vasovagal syncope is the result of emotional excitation of the parasympathetic nerves to the heart and of the vasodilator nerves of skeletal muscles. The result is reduced heart rate, reduced arterial pressure, and reduced blood flow to the brain. Factors that provoke syncope include pain, anxiety, and heat. Syncope may also result from cardiac or vascular problems or other causes.

Vasovagal syncope is seen commonly in young adults and is characterized by the appearance of pallor at the onset, diaphoresis (profuse perspiration), and syncope of short duration. The patient feels distressed, weak, and dizzy, and may be nauseated and have moist/>