Cells are under constant threat of injury as a consequence of changes in their local environment. There are numerous potentially injurious agents that a cell may encounter. The type of mediator depends on the location of the cell within the body. There are agents that cause physical damage to cell integrity, e.g. mechanical trauma, thermal injury and chemical damage. Cellular viability is affected by the deleterious effects of microorganisms. Cells are also prone to damage following a reduction in oxygen and nutrient supply. Cell injury may be induced by DNA-damaging agents, such as ionising radiation.

Cell injury may be reversible or irreversible. This depends on the type of injurious agent, the duration of the adverse conditions and the ability of the cell to adapt to the changes. If the cell is unable to adapt and survive, there are two distinct pathways leading to cell death – necrosis and apoptosis (programmed cell death). Consequences of tissue injury are shown in Table 2.1 and described below.

Necrosis is the death of groups of cells. It has profound consequences on tissue integrity and function. In some circumstances, e.g. in the heart, ischaemic necrosis of the myocardium can result in complete organ failure and death of the individual. Various types of necrosis are described depending upon the gross and microscopic appearances observed within tissues when stained with haematoxylin and eosin (H&E). Haematoxylin stains cell nuclei dark blue, whereas eosin stains the cytoplasm and the connective tissue fibres a reddish pink colour.

Coagulative necrosis is the most common type of necrosis and can occur in most organs and tissues. Immediately following cell death, the architecture of the tissue is retained; the cell outlines are discernible along with tissue architecture. There is progressive loss of nuclear staining (basophilic/dark blue stain) and there is a loss of cytoplasmic detail, with condensation and breakdown of intracellular proteins (haematoxyphilic/light pink stain). Eventually, all that remains are the ‘ghost’ outlines of cells embedded in the extracellular matrix that comprises the tissue. Accompanying necrosis is an ensuing inflammatory reaction, which results in progressive dissolution of the damaged tissue with variable attempts at regeneration and repair, depending on the affected tissue.

Colliquative necrosis is observed in the brain following cerebral infarction. The brain has little in terms of robust collagenous supporting tissues, and the necrotic neurons and glial tissue break down to form a liquid material (liquefactive degeneration). The latter is progressively removed by microglia (macrophages/histiocytes) leaving a fluid-filled cavity.

Caseous necrosis is characterised by structureless necrotic tissue, which has the textural quality of crumbly cheese. It is typically seen in the context of granulomatous inflammation caused by Mycobacterium tuberculosis.

Fibrinoid necrosis is seen in malignant hypertension and diseases characterised by vasculitis. Necrosis of smooth muscle cells in the arterial wall causes plasma to leak into the tunica media with deposition of fibrin. Fibrin is eosinophilic and takes on a distinct bright red colour when stained with H&E.

Damage to adipose tissue and the release of stored intracellular fat elicits an intense acute inflammatory response, which is typically followed by a dense fibrotic repair reaction.

Gangrene is necrosis with accompanying putrefaction (breakdown) of the tissues. Gangrene is typically seen in the lower extremities (legs and toes) and is usually the result of supervening infection of the necrotic tissue with bacteria, particularly Clostridium.

Apoptosis is the process whereby cells can be removed in a controlled manner, without disrupting the integrity of the organ or tissue. Apoptosis is also called programmed cell death, which emphasises that it is a cellular process induced and executed by specific biochemical pathways. Apoptosis has a pivotal role in development, and controls organ size and tissue morphogenesis. In the adult, apoptosis counterbalances cellular proliferation, helping to maintain optimal cell numbers and cell types within a particular tissue. Apoptosis is also essential for the establishment of a functional immune system, through deletion of unwanted lymphocyte clones. Apoptosis is considered to play an important role in ageing, and deregulated apoptosis is involved in the pathogenesis of neoplasia. 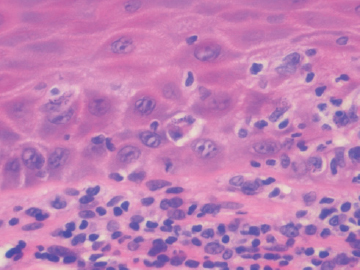 Cells undergoing apoptosis show distinct morphological characteristics when viewed by light microscopy in H&E-stained tissue sections (Fig. 2.1). The dying cell shrinks and there is a loss of cellular adhesion. The cytoplasm condenses and becomes markedly eosinophilic. The chromatin of the nucleus becomes densely basophilic and fragments, producing the appearance of ‘nuclear dust’. The dead cell is phagocytosed by adjacent cells or histiocytes. There is no induction of the inflammatory cascade that typically accompanies cell death by necrosis.

Wound healing describes the processes that take place, following tissue injury, which are required to restore or replace damaged tissue. The effectiveness of the healing process is dependent on the ability of the constituent cells to regenerate, reorganise and recreate the original tissue architecture.

Cells in the adult can be classified by their potential to regenerate. Labile cells are continuously being lost and replaced. They include haematopoietic cells of the bone marrow and epithelial cells that constitute the epidermis and line the mucous membranes. Stable cells are not continuously replaced, but can be induced to regenerate in certain conditions; examples include hepatocytes of the liver and renal tubular cells that make up the kidney.

Non-dividing cells cannot be stimulated to proliferate and therefore have no capacity for regeneration; examples include cardiac muscle fibres and neurons. Labile cells that make up simple tissue structures such as the skin and the mucous membranes are the most effective at restoring tissue architecture following injury (regeneration). Stable cells can be induced to proliferate but, in the liver and kidney, the complexity of the organ structure precludes successful regeneration and the establishment of physiological function. Damaged tissue composed of non-dividing cells is either removed to leave a tissue defect (colliquative necrosis following cerebral infarct) or repaired by fibrous tissue to produce a scar (organisation).

Skin is used as a model for studying wound healing. Healing of skin is usually described as occurring by primary intention, when the wound edges are approximated, and by secondary intention when there is a tissue defect that prevents closure of the wound (Table 2.2).

A surgical incision that has been closed by sutures heals by primary intention. In these circumstances, the apposed wound edges are stuck together by fibrin, which forms a scab at the skin surface. Below the scab, within the damaged epidermis, the basal keratinocytes proliferate and migrate across the narrow defect and within 5–7 days the epithelium has completely regenerated. The fibrin that sticks the incised edges of the dermis together is gradually replaced by cellular fibrovascular tissue. Small capillary buds grow into the wound, providing oxygen and nutrients, and fibroblasts migrate into the area, producing collagen and other extracellular matrix proteins. Gradually, the fibrovascular tissue becomes less vascular and matures to form fibrous scar tissue.

On occasions, it is not possible to appose the edges of a wound and the tissue defect heals by secondary intention. Initially, the tissue defect is composed of necrotic tissue admixed with blood clot (haematoma). The necrotic tissue is removed by histiocytes and the blood clot is gradually replaced by highly cellular fibrovascular tissue, called granulation tissue. The term granulation tissue refers to the visual appearance of the tissue in the base of a wound, which is bright red and has a rather granular appearance. It is important to point out that granulation tissue is distinct from the term granulomatous inflammation, which is discussed below.

Granulation tissue is composed of proliferating endothelial cells that form rudimentary imperforate capillaries, small capillary buds and loops. As the granulation tissue matures, the capillaries become dilated and engorged with blood. There are fibroblasts producing collagen and extracellular matrix proteins that progressively fill the tissue defect. In addition, there are myofibroblasts, which are specialised fibroblasts that contain contractile smooth muscle filaments. Myofibroblasts are considered to play an important role in wound contraction, which facilitates closure of the tissue defect. In some circumstances, this causes marked tissue distortion with attendant cosmetic and functional problems. Towards the skin surface, the epidermal keratinocytes at the margins of the defect divide and migrate below the scab to form a thin sheet of epithelial cells. Gradually, the tissue defect is completely covered by full-thickness epidermis and the scab is exfoliated. Sometimes, the production of fibrous repair tissue is excessive and the dermis becomes bulky and lumpy, this is referred to as a hypertrophic or keloid scar (Fig. 2.2).

Wound healing proceeds in a similar manner following injury of bone (Table 2.2). For example, following fracture of a limb bone, a haematoma forms at the site of injury and invests dead pieces of soft tissue and devitalised fragments of bone. The soft tissue is removed by histiocytes and the bone is removed by osteoclasts. Granulation tissue gradually replaces the haematoma, and woven bone is laid down to form a callus. The woven bone of the callus is eventually remodelled to lamellar bone and, consequently, within 6–8 weeks there is very little evidence of the injury; this is known as regeneration. Healing of long bones is dependent, however, on close apposition of the broken ends of the bone and immobilisation of the fracture site. Failure to ensure the latter may result in failure of regeneration of bone and the production of a fibrous union (pseudoarthrosis; false joint). 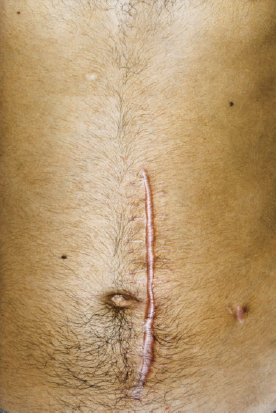 The liver has a complex architecture, with hepatocytes arranged in a lobular configuration around hepatic vessels and bile ducts. Hepatocytes are stable cells that can be induced to proliferate, and small groups of cells are capable of regenerating and recreating the lobular architecture following injury. However, following extensive damage to the liver, e.g. during long-standing alcohol abuse, there is disorganised nodular regeneration of hepatocytes, as opposed to lobular regeneration, and there is also extensive fibrosis, which results in liver cirrhosis. The kidney is similar, in that the tubular cells are capable of regeneration, but the complex microanatomy of the organ is difficult to recreate and organ damage usually heals by fibrosis.

Inflammation is a protective response the goal of which is to eliminate the injurious agent and the consequences of tissue damage. Ideally, the inflammatory process facilitates repair of damaged tissue; however, in some circumstances, inflammation can have harmful effects on the tissues and compromise the well-being of the individual.