This chapter gives a simple and practical overview of normal kidney function, acute and chronic renal dysfunction, and renal replacement therapy for end-stage renal failure (ESRF). It is intended as clinically useful information for dental students and practitioners, it is not a comprehensive review of all renal diseases.

Structure of the kidneys

There are two kidneys, lying extraperitoneally on either side of the vertebral column. The kidneys are surrounded by fat in the retroperitoneal space; they move several centimetres with respiration. Each kidney consists of an outer cortex, containing the glomeruli, tubules and vessels, and the inner medulla, containing the loop of Henle and medullary collecting tubules.

The kidneys receive about 20% of total cardiac output, roughly a litre per minute. Each kidney consists of about a million nephrons. The nephron is the functional filtering unit of the kidney, comprising a glomerulus and the renal tubule. At the glomerulus, the afferent arteriole divides into several glomerular capillaries to form a loop of capillaries that make up the glomerular tuft; these capillary loops then recombine to form the efferent or outgoing arteriole (Fig. 8.1). Each glomerulus is enclosed within an epithelial cell capsule called Bowman’s capsule, which is continuous with the basement membrane of the glomerulus and also with the start of the tubule. The tubule consists of the following segments – first the proximal tubule, then the loop of Henle, then the distal tubule that drains into the collecting ducts. Urine in the collecting ducts drains into the pelvis of the kidney, then via the ureters to the bladder.

Blood circulates through the glomerular capillaries. Their specialised structure permits the production of an ultrafiltrate of plasma, consisting of water containing only small solutes, which passes across the glomerular filtration barrier into the urinary space and then into the tubule.

Next to the glomerulus is the juxtaglomerular apparatus (JGA), at the vascular pole where the afferent arteriole arrives and the efferent arteriole leaves the glomerulus. The cells of the JGA are the source of the hormone renin, which, via the renin–angiotensin– aldosterone system, contributes to control of blood pressure, salt and water homeostasis and vascular tone.

The ultrafiltrate of plasma is modified as it passes along the different sections of the tubule. Substances may be reabsorbed from the ultrafiltrate within the tubular lumen into the peritubular capillaries and so returned to the circulation (tubular reabsorption), or actively transported from the peritubular capillaries and secreted into the tubular lumen (tubular secretion).

Figure 8.1 Scanning electron micrograph showing a vascular cast of two juxtamedullary glomeruli (rat). Each capillary tuft is supplied by an afferent arteriole (AA) which, on the surface of the tuft, immediately divides into several branches. Efferent arterioles (EA) emerge out of the centre of the tuft. (400×). (Reproduced by permission of Oxford University Press.) 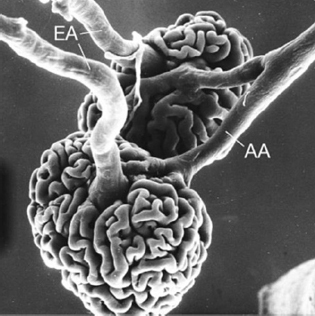 The loop of Henle

The kidney is able to vary the volume and concentration of urine depending on water intake and body fluid status. When water intake is high, water is excreted in excess of solute in a dilute urine that is hypo-osmolar compared with plasma. When water intake is low, water is retained by the kidney and a concentrated urine that is hyperosmolar compared with plasma is excreted. The ability to form concentrated or dilute urine depends on the countercurrent multiplier mechanism in the loop of Henle (Fig. 8.2). This depends on different permeability properties and different transport processes in the descending and ascending limbs of the loop. Although this mechanism is not completely understood, it is believed to depend on the development of a hyperosmotic medullary interstitium, produced by reabsorption of sodium chloride (NaCl) without water in the medullary ascending limb of the loop of Henle. This active NaCl transport out of the lumen into the interstitium results in a dilute urine and concentration of the interstitium. High urea concentrations in the interstitium also contribute to the hyperosmolarity. Because of the different permeabilities of the descending and ascending limbs of the loop of Henle, a medullary osmotic gradient is produced, which is highest at the tip of the loop in the inner medulla and papilla. As urine passes along the tubule it equilibrates with the hyperosmolar interstitium, and water passes from the lumen to the interstitium (Fig. 8.3). The collecting tubule is very impermeable to water in the absence of antidiuretic hormone (ADH). ADH is synthesised in the hypothalamus and secreted in response to hyperosmolarity or reduced circulating volume.

Renal function is best described as the glomerular filtration rate or GFR, which is equal to the sum of all the filtering nephrons. There are several methods used to assess GFR, two of which are described below.

Metabolism produces hydrogen ions or protons that must be buffered to allow the body to maintain a constant pH and then excreted. There are many buffer systems in the body, but the most widespread is the bicarbonate (HCO3−) buffer system, where bicarbonate accepts protons and shifts to carbon dioxide (CO2) and water as below:

This buffering maintains pH but cannot do so indefinitely, since the amount of buffer available within the body is limited. Eventually the protons have to be excreted from the body and the buffer regenerated. The kidney regenerates bicarbonate as well as reabsorbing filtered bicarbonate from the urine, mostly in the proximal tubule.

Figure 8.2 A schematic diagram of the various components of the fluid and electrolyte management system of the kidney. 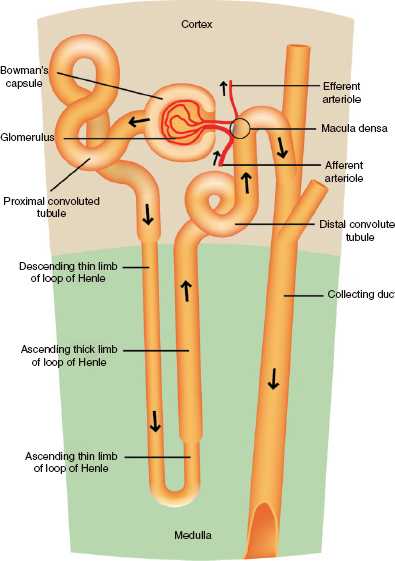 At the glomerulus, an ultrafiltrate of plasma is produced, consisting of water and very small solutes only. Normally no large molecules such as proteins are allowed to pass through the glomerular filtration barrier. The ultrafiltrate passes first into Bowman’s capsule and then into the proximal tubule. It is extensively modified by concentration and active and passive ion transport as it travels on down the nephron to the collecting duct.

Figure 8.3 A simplified diagram to illustrate various components and their functions. 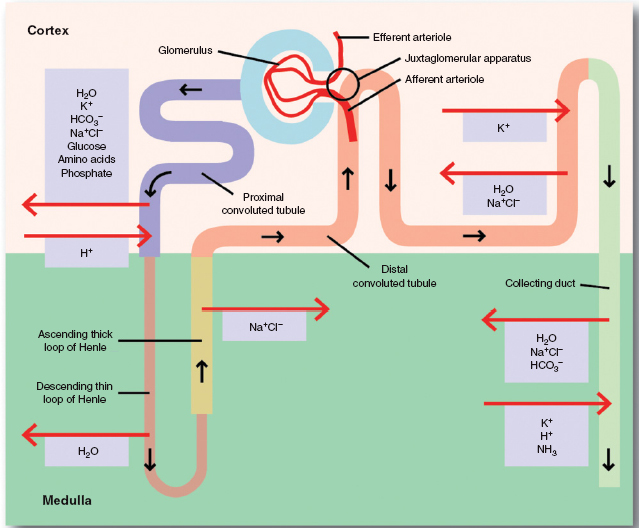 The kidney excretes the waste products of metabolism, urea, creatinine, potassium and hydrogen ions or protons.

The kidney also excretes many drugs and metabolites. When kidney function is reduced, the dose of watersoluble drugs that are renally cleared must be reviewed and reduced.

The kidney also produces the hormone erythropoietin or Epo, which acts on the bone marrow to maintain red cell production and thus haemoglobin concentration.

This is one of the key regulators of salt and water balance and vasoconstriction, and thus arterial blood pressure control. Renin is synthesised by the cells of the JGA in response to various stimuli. Renin cleaves angiotensin, synthesised in the liver, to angiotensin-I. This is converted by angiotensin-converting enzyme (ACE), present in the lungs and endothelial cells, to angiotensin-II. 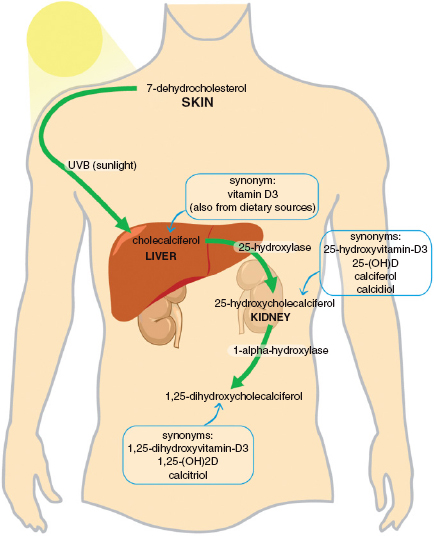 Angiotensin-II binds to at least two receptors, AT1 and AT2, though several additional receptors have been identified. Most of the known effects of angiotensin-II are related to binding to the AT1 receptor, which results in vasoconstriction, aldosterone and vasopressin release, and salt and water retention in the kidney, as well as sympathetic nervous system activation. AT2 receptors are involved in antiproliferative and remodelling effects, which are thought to be important in the many cardioand reno-protective effects of renin–angiotensin blockade that have been described.

Renal dysfunction may present as an asymptomatic finding such as microscopic haematuria, with or without proteinuria, at routine screening, often at a well-person clinic or check-up. Urine dipstick examination for blood and protein now forms part of the annual assessment of patients at risk of renal disease, such as hypertensives or diabetics. Standard urine dipsticks test for urine pH, blood, protein, glucose, ketones, bilirubin and urobilinogen. Dipsticks can also be used to screen for leukocytes and nitrites, suggestive of urinary tract infection. Blood detected on urine dipstick testing may be due to blood loss from the urinary tract secondary to urinary tract infection and bladder inflammation, renal stones, cancer, etc.

Abnormal amounts of protein may appear in the urine as a result of damage and leakage at the glomerular filtration barrier, with increased amounts of high molecular weight proteins overwhelming the tubular capacity for reabsorption.

This is a clinical presentation that may result from a variety of underlying renal pathologies causing disruption of the glomerular filtration barrier, usually due to immune-mediated inflammation and glomerulonephritis. The nephritic syndrome comprises oliguria, smoky or coca-cola-coloured urine due to haematuria, oedema and hypertension due to salt and water retention, and acute renal dysfunction. Typically there is significant haematuria and proteinuria on urine dipsticks testing.

Acute renal failure, now called acute kidney injury (AKI), is renal dysfunction occurring over hours to weeks. AKI is commonly seen in critically ill patients and is associated with increased morbidity and mortality. It is important to identify AKI and to distinguish it from chronic kidney disease (CKD), since AKI can be treatable and reversible, with restoration of normal renal function, depending on the underlying cause. Early correct identification and appropri/>