Aging is a natural consequence of life and involves anatomical, biochemical, and physiological alterations in every system. These changes present with a high degree of heterogeneity, which challenge health-care providers to differentiate signs of normal aging from disease. Common age-related changes and age-related disorders of vision, hearing, mobility, and cognition will be discussed in this chapter. These health concerns often cause disability and vulnerability, and impact one’s quality of life. Age-related visual and hearing impairments decrease one’s ability to complete their activities of daily living (ADLs) and communicate with others, and can lead to isolation and depression.1

The most common causes of vision impairment that lead to blindness are age-related macular degeneration (AMD), glaucoma, cataract, and diabetic retinopathy.

Presbyopia is the loss of visual acuity due to a progressive change in the optic compartment. Presbyopia presents with difficulties in the ability to focus at close range, read small print, see well in dim lighting, and differentiate colors. It is not a disease. Most with presbyopia do not become completely blind, but experience partial/moderate loss of vision and may need to develop new skills to remain self-reliant.

Cataract is a clouding or opacity of the lens of the eye that can range from a small, localized area to a diffuse loss of transparency. Most are related to aging. By age 80, >50% of Americans have a cataract or have had cataract surgery. The most common symptoms include cloudy or blurry vision, colors seem faded, glare from headlights and sunlight, poor night vision, double vision, or multiple images in one eye. See Fig. 18.1.

Figure 18.1 (a) Normal vision. (b) The same scene as viewed by a person with cataract. From the National Eye Institute, NIH, USDHHS. Facts about Cataract. September 2009.

AMD is due to the abnormal vascularization under the retina, which causes progressive damage to the macula, the central part of the retina that allows fine details to be visible.2 AMD leads to loss of central vision, which is needed for reading, driving, recognizing faces, and remaining independent. Peripheral vision is usually retained.

Glaucoma comprises a group of disorders characterized by optic nerve damage and visual field loss. It is chronic, progressive, and degenerative, usually occurs insidiously and is asymptomatic in early stages. Vision loss is caused by a progressive loss of optic nerve fibers. If not treated, it can cause irreversible blindness.3 Those with glaucoma may have elevated intraocular pressure.4

Age-related hearing loss or presbycusis is a progressive sensorineural hearing loss that may involve both peripheral reduction in hearing threshold sensitivity and impairment of central processing. It is usually symmetric, though may have significant variation between ears. Age-related hearing loss often goes undetected and untreated, and has caused some with hearing loss to be wrongly labeled as “confused,” “nonresponsive,” or “uncooperative.” Hearing-impaired older adults may withdraw from social situations to avoid frustration and embarrassment, increasing their risk of social isolation, depression, and declining physical functioning—ultimately decreasing their quality of life.6

Osteoarthritis (OA) or degenerative joint disease is a progressive pathological change of the hyaline cartilage and underlying bone of a joint, and is the most common type of arthritis. Joints most commonly affected are knees, hips, hands (Heberden’s nodes a re a visible sign, see Fig. 18.2), and spine. It is not caused simply by wear and tear. Presence of OA in weight-bearing joints has the greatest clinical impact. Disease onset is gradual and usually begins after the age of 40. 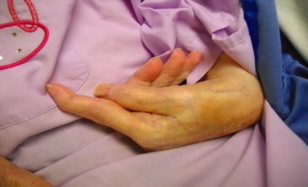 The Role of Cognition in Older Adults

As people age, they are at an increased risk of having cognitive and memory problems, or cognitive aging. The cognitive functions most affected by age are attention and memory; however, age-related changes are not uniform across all cognitive domains7 or across individuals. There is enormous variability in cognitive decline seen in older adults. Memory loss is not inevitable as people have lived to extreme old age without severe memory loss.8

The lack of cognitive health can have profound implications for a person’s health and well being. Limitations in one’s ability to manage medications, medical conditions, or to live safely are of particular concern when a person is experiencing a cognitive impairment. Poor cognitive health leads to increased vulnerability to disease, injury, malnutrition, crime, abuse, and eventually a loss of independence.

Cognitive impairments adversely affect the person with the disease and their family, caregivers, and friends. Obtaining an early diagnosis of a cognitive impairment can make a significant difference in the lives of patients and their families; however, it is relatively rare that a cognitive disorder is diagnosed early in the course of the disease.10

MCI is a syndrome of having a cognitive decline greater than expected for an individual’s age and education level that does not interfere notably with ADLs. MCI does not meet the criteria for dementia. MCI criteria include a cognitive impairment, essentially normal functional activities, abnormal memory function for age and education (1–2 standard deviations), and absence of dementia.11

MCI is a risk state for AD, with the rate of conversion ranging from 10% to 15% per year, due to differences in assessment procedures, sample composition, and definition of cases. Early identification of MCI can lead to secondary prevention by controlling risk factors.12

There are two primary types of MCI:

Dementia is a syndrome characterized by progressive deterioration in multiple cognitive domains, severe enough to interfere with daily functioning. Dementia is the umbrella term used to describe cognitive impairment.

AD is a progressive, degenerative, neurological disorder that manifests by loss of intellec­tual functions, including memory, language, visuospatial skills, behavioral changes, problem-solving ability, and abstract reasoning.14 Early-onset AD, a rare disease inherited in an autosomal dominant pattern, occurs between 30 and 50 years of age. Late-onset AD typically affects those ≥65 years. AD is the most common type (60–80%) of dementia in the United States.

Disease onset is insidious; manifestations evolve over a period of years from mildly impaired to severe cognitive loss. Progression of the disease is inevitable and may include plateaus of 1–2 years.9 Table 18.1 describes the seven stages of Alzheimer’s.

It is difficult to place a person with Alzheimer’s in a specific stage as stages may overlap.

Age-related eye changes include the following:

Cataract is an age-related condition.

OA: Unknown etiology; classified as idiopathic and secondary (traumatic, congenital, or due to other causes).