Neurodevelopmental and psychiatric disorders of particular importance to dentistry are discussed in this chapter.

ID is a disability with onset before age 18 years that is characterized by significant limitations both in intellectual functioning and in adaptive behavior, affecting many everyday social and practical skills.1

CP is a general term used to describe a number of neuromuscular disorders that are present at birth or are acquired during infancy. CP affects muscle movement as a result of structural abnormalities or trauma to parts of the brain that control this function.

An International Workshop on the Definition and Classification of Cerebral Palsy, held in 2004, developed the following definition3:

Cerebral palsy (CP) describes a group of disorders of the development of movement and posture, causing activity limitation, that are attributed to non-progressive disturbances that occurred in the developing fetal or infant brain. The motor disorders of CP are often accompanied by disturbances of sensation, cognition, communication, perception, and/or behavior, and/or by a seizure disorder.

Individuals can present with a wide variety of behavioral characteristics, ranging from mild to very severe involvement. However, these behaviors may change with the acquisition of other developmental skills. Asperger syndrome is a high-functioning form of autism with impaired social interactions, limited repetitive patterns of behavior, and delayed motor milestones and clumsiness. Common comorbidities include mental retardation (intelligence quotient [IQ] <70) in 70% and epilepsy in 25% of cases.5

ADHD is a neurodevelopmental disorder that is characterized by an inability to regulate attention, often with displays of hyperactivity and impulsivity.4,6,7

Genetic disorders are a leading cause of ID. There are over 800 syndromes associated with ID.8 Intrauterine exposure to toxins (e.g., fetal alcohol syndrome, anticonvulsant medications), intrauterine infections (e.g., cytomeg­alovirus, rubella, toxoplasmosis), metabolic disorders and neurodegenerative disorders can also cause ID in a child. Other etiologies include perinatal/postnatal conditions such as extreme premature birth, intraventricular hemorrhage, hypoxic–ischemic encephalopathy, traumatic brain injury, and meningitis.

The genetic basis for DS is a mutation resulting in an extra copy of chromosome 21 (seen in 95% of cases). A much smaller number of cases (up to 5%) involve translocation or mosaicism of chromosome 21.

CP may be attributed to structural abnormalities in the brain as well as the central nervous system (CNS) vascular insufficiency resulting in hypoxia to the developing brain. Risk factors for CP include:9,10

There is no known single cause of autism; etiologies are likely multifactorial. Current research is focusing on factors that could influence the development of the embryonic brain11:

A precise etiology for ADHD has not been established. Studies of families with the disorder suggest a strong genetic component, possibly with altered function of neurotransmitters and structural abnormalities in the brain.6,7

Approximately 85% of people with ID are in the mild range with an IQ of 50–70, academically at the level of a sixth grader, and functionally able to live in the community with minimal support.16 ID itself is not associated with a shortened life span. However, life span may be decreased due to the underlying etiology for the ID. Higher rates of seizure disorders, gastrointestinal complications including feeding dysfunction and gastroesophageal reflux, and respiratory disease are common.

CP can be classified according to the nature of the motor disorder19:

CP can also be classified topographically, according to which parts of the body are affected:

Patients will often present with a diagnosis encompassing both type and location of disorder, that is, “spastic diplegia.”

U.S. prevalence rates of ADHD in school-age children range from 5.6% to 15.9%, with pronounced state-by-state variation, possibly due to differences in diagnostic testing. Boys are almost three times more likely to be diagnosed with ADHD than girls, although it is thought that some of this difference may be attributed to the fact that more boys display hyperactive/impulsive behaviors than girls.21

Physicians may be the first to notice oral trauma or oral neglect and related infections in patients with neurodevelopmental disorders and should refer the patient to a dental provider for prevention and care. The dentist may require consultation with the physician for patients with complicated medical and behavioral issues.

Individuals who are considered to be “intellectually disabled” must show deficits not only in cognitive functioning, but also in adaptive functioning (i.e., communication, self-care, home living, and social and interpersonal skills). Cognitive functioning refers to IQ levels, with an IQ below 70 indicating an ID (mean IQ = 100; 70 is 2 standard deviations below the mean).4

The clinical picture of CP can vary greatly from mild to severe functional and systemic involvement. In addition to various medical specialists, a team of health-care professionals, including physical, occupational, and speech therapists may be required to optimize the individual’s quality of life. Medical complications associated with CP include but are not limited to:23

The diagnosis of ASD is behaviorally based. There are no specific genetic, medical, or laboratory tests that are diagnostic for ASD. Deficiency in at least one of the areas of communication, socialization, or restricted behavior must be present before the age of 3. Formal diagnosis requires a two-stage process: developmental screening during “well child” checkups and if problems are detected, then the child should be referred for the second stage, which is a comprehensive evaluation by a multidisciplinary team.24

Diagnostic criteria require characteristics to be evident by age 7 and must have had duration of at least 6 months. The disorder is classified into three distinct subtypes4:

Comorbidities include anxiety and depression. Adults with inadequately treated ADHD show a high incidence of illicit drug use, which may indicate an attempt to self-medicate.7

Auxiliary therapies such as occupational therapy, speech therapy, and parental counseling are also often necessary.11
ASD: While there is no U.S. Food and Drug Administration (FDA)-approved treatment for ASD, patients are often on medications to help control hyperactivity, repetitive behaviors, and aggression. Approximately 10% of patients with ASD have an associated genetic disorder (e.g., tuberous sclerosis, Fragile X, Prader–Willi, and Angelman syndromes), which may require additional medical management.25
CP: Depending on severity, patients with CP may require antispasmotic and antiseizure medications. They may also need surgery to correct contractures (foot, ankle, hand, wrist, knee, hip, and pelvic) or spinal deformities so as to improve balance, walking, and standing.
ADHD: Treatment consists of behavioral therapy combined with pharmacotherapy. Medications frequently used in the treatment of ADHD6 are shown in Table 15.1.

Table 15.1. Oral Side Effects and Interactions of Drugs Used in Neurodevelopmental Disorder (and Some Overlap with Psychiatric and Neurological Disorders) 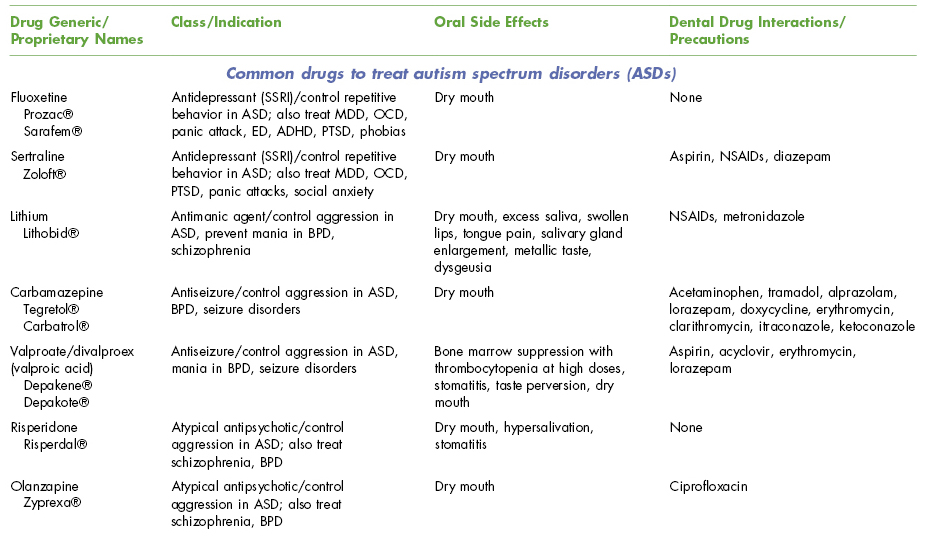 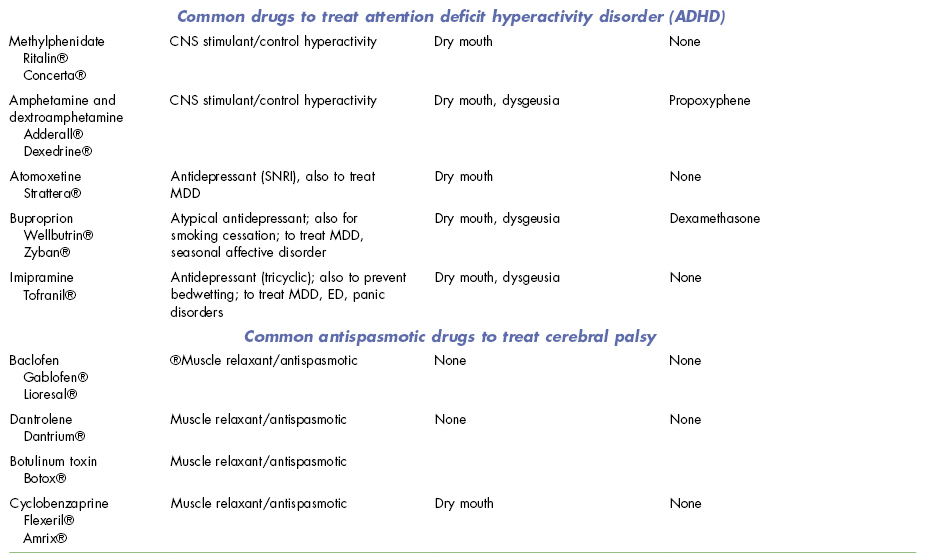 Important aspects of dental history include ascertainment of legal guardianship status for the patient, assessment of type and adequacy of patient oral hygiene and need for caregiver supportive oral care, past abilities to tolerate dental treatment in the dental office setting, need for anxiety management, sedation or general anesthesia to accomplish treatment, current oral health status, and ability to make improvements in oral health with coaching. The caregiver and legal guardian should be present and participate in interpreting or clarifying the patient’s unique communication style or to report on past dental history and challenges with patient communication and cooperation with dental care.

Key questions to ask the patient (caregiver) with neurodevelopmental disorders

Orofacial features characteristic of individuals with DS, as seen in Fig. 15.1, include:2,22

Figure 15.1 Young lady with Down syndrome ready for her high school prom. 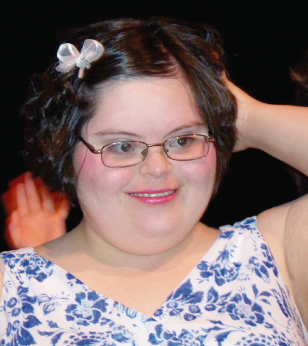 As with medical issues, there is great variation in oral conditions associated with CP. Some of those seen most frequently include:26,27

Traditional behavior management techniques such as tell–show–do are often successful. Direct uncomplicated language should be used, being mindful of the person’s biological age and being sure to maintain the person’s dignity by not talking “baby talk.” It is equally important to address the patient and not just the caregiver or guardian while explaining treatment and options. Issues of guardianship should be determined, and only legal guardians should sign consent if the patient is unable to do so. Treatment planning should be based on the principle of patient-centered care. Plans should start at ideal, and then be adapted or modified after considering the patient’s abilities, wants, and needs, as well as his or her ability to tolerate the treatment and maintain restorations.28

Oral hygiene and routine preventive care should be emphasized. For patients who cannot reliably swish and spit, chlorhexidine applied to the toothbrush with assisted brushing may be beneficial. Oral hygiene techniques for patients who resist caregiver help may need to be demonstrated to the caregiver. As shown in Fig. 15.2, a useful approach to assisted brushing (after the patient has made an attempt to brush his or her own teeth, if possible) is from behind the patient’s head, with the head supported.

Figure 15.2 Positioning for providing oral hygiene for a patient in a wheelchair.

From the Practical Oral Care for People with Cerebral Palsy. NIH publication No. 09-5192. Available at: www.nidcr.nih.gov/OralHealth/Topics/DevelopmentalDisabilities/PracticalOralCarePeopleCerebralPalsy.htm. 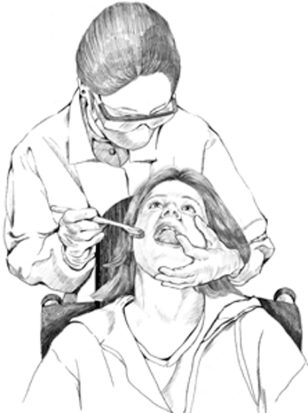 A number of factors can complicate oral health maintenance for individuals with ID. Patients may exhibit oral habits such as bruxism or other self-injurious behaviors, which are seen more frequently in individuals with low cognitive function and sensory impairments.

Individuals with DS are at higher risk than the general public for the development and early onset of periodontal disease.2,22,29 Rates of periodontal disease have been reported as high as 90–96% in adults22 and may be due to the compromised immune response and abnormalities in capillary morphology and connective tissue.29

Although dental caries incidence in institutionalized children with DS whose diets are closely monitored is low, they maintain caries risk and should receive the same preventive considerations as other children. The deinstitutionalization of individuals with DS and subsequent “normalization” of their diets has led to a caries rate closer to that of the general population.22

Hemostasis and Susceptibility to Infection

DS: Patients are more susceptible to infections due to immune compromise (lymphopenia and defects in neutrophil chemotaxis).30

ASD and ADHD: Common medications to treat ASD and ADHD may have interactions and side effects, particularly dry mouth that may require caries-preventive approaches with use of topical fluorides (see Table 15.1).

It is important from the start to determine each individual’s ability to communicate and cooperate.2,22 Cognition, communication, and behavior should be kept in mind when planning dental treatment. An awareness of each individual’s physical and behavioral limitations should guide the oral health professional when providing care. The goal should be to provide optimal oral care while using the least restrictive techniques.

The majority with mild-to-moderate behavioral concerns can be managed within the routine dental setting. For some individuals who have extensive treatment needs or difficult behaviors, it may be necessary to consider sedation or general anesthesia.

DS and CP: The combination of hypotonia and upper airway anomalies may increase risk for adverse events during sedation, factors that should be weighed when planning treatment modalities.