Head and neck cancers vary by histopathol­ogy and location in this region, yet 90% arise from the lining mucosa of the oral cavity and pharynx, also referred to as the upper aerodigestive tract.

Tobacco use in any form can cause head and neck tumors, with risk increasing in proportion to the duration and intensity of usage. Patients with head and neck cancer who continue tobacco use carry a high risk for a second primary tumor in the region.

Figure 13.1 Squamous cell carcinoma of the lower lip in a 61-year-old white male with a history of cigarette smoking. 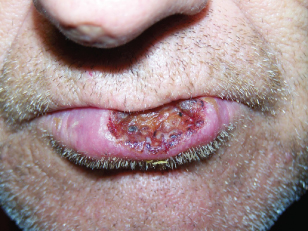 The majority of HNSCCs develop from premalignant lesions such as leukoplakia and eryth­roplakia, which present with histological findings of dysplasia; however, not all dysplastic lesions progress to carcinoma (see Chapter 16, “Substance Use Disorders”). Current research indicates that the development of cancer is driven by an accumulation of genetic and epigenetic changes within a clonal population of cells.5

According to the Surveillance Epidemiology and End Results (SEER) data in the United States, there is a marked difference in incidence, tumor site, and outcome between sexes, socioeconomic status, and race after standardization for age.

Sex: Male-to-female ratios are 2:1 to 3:1, more strongly male dominated for larynx cancers than tumors of the oral cavity and pharynx.
Race: African-American men have a higher incidence per 100,000 people, are diagnosed at later stages, and have poorer 5-year survival compared with whites in the United States.
Age: Incidence of head and neck cancer also increases with age, wherein the majority prevalence occurs between 50 and 70 years. Although HPV-positive head and neck cancer has been noted in younger individuals, the mean age of laryngeal SCC has a peak incidence at 70 years and pharyngeal SCC incidence increases from teens to peak at the age of 80 years.
Incidence Trends: The U.S. SEER registries for 1973–2004 revealed that the incidence of oral SCC increased in the sites potentially linked to HPV infection, with an annual percentage change at +0.80%, whereas it decreased in the sites unrelated to HPV infection.7

Therapeutic interventions and prognosis differ widely depending on the stage at diagnosis, location and histology of the tumor. Coordination of care is important before, during, and after cancer therapy due to the extent, nature, severity, and duration of complications of therapy in the head and neck region that can impact esthetics, speaking, mastication, deglutition, overall nutrition, comfort, and quality of life.

Head and neck cancers can be asymptomatic until they are quite advanced. They present with insidious symptoms. Expeditious diagnosis and treatment has an impact on cancer outcomes.

Signs and Symptoms of Head and Neck Cancer Presentation

Visual screening is a simple method for early detection of oral lesions. An American Dental Association Council on Scientific Affairs Expert Panel on Screening for Oral SSCs provided evidence-based clinical recommendations.8 The panel emphasized that screening for oral cancer is one component of a thorough hard-tissue and soft-tissue examination that follows patient history and risk assessment and that both benefits and limitations result from screening, with limited evidence that screening impacts oral cancer mortality rates. See Table 13.1.

a  There is insufficient evidence that use of commercial devices for lesion detection that are based on autofluorescence or tissue reflectance enhance visual detection of potentially malignant lesions beyond a conventional visual and tactile examination.

Aids to oral, oropharyngeal cancer, and precancerous lesion screening are not widely used due to the lack of randomized controlled trials or large-scale studies that are sufficiently sensitive and specific in comparison to the gold standard of biopsy results to demonstrate effectiveness and general lack of assessment in populations seen in general dental practices.9 Another disadvantage is their inability to differentiate cancer from precancerous lesions.12

1. Toluidine blue (tolonium chloride) is currently not approved as a stand-alone test by the U.S. Food and Drug Administration (FDA), but widely used sporadically worldwide. It is either applied on suspicious lesions or used as a mouth rinse and spit to stain early oral SCC and high-grade dysplasia. There is confusion over inclusion of equivocal staining lesions as positive or negative.12
2. Transepithelial oral cytology (Oral CDx® Brush Test®, OralCDx Laboratories, Inc., Suffern, NY). It has been studied with a design not to brush test low-suspicion lesions based on clinical features. Brush cytology does not provide a definitive diagnosis like scalpel biopsy diagnosis. When an abnormal result is reported, a surgical biopsy has to be performed.
3. Tissue reflectance or chemiluminescence (reflective tissue fluorescence)—(ViziLite® Plus with TBlue®, Zila, Inc., Fort Collins, CO; Microlux™, AdDent, Inc., Danbury, CT; Orascoptic DK™, Orascoptic, A Kerr Co., Middleton, WI). It is a direct visual exam using a blue light after application of a 1% acetic acid solution wash to remove oral debris and allow visualization after cellular dehydration. Under blue-white illumination, normal epithelium appears blue and abnormal tissue appears distinctly white. This aceto-white area can be marked with tolonium chloride for biopsy (ViziLite Plus® with TBlue®).
4. Narrow-emission tissue autofluorescence (VEL­scope® Vx, LED Dental, Burnaby, BC, Canada). This is fluorescence imaging, which uses a blue excitation light. Normal oral mucosa emits a pale green autofluorescence when seen through a filter. In contrast, abnormal or suspicious tissue appears dark. However, proper filtration is critical and large sample studies are lacking.
5. Multispectral technology (autofluorescence and tissue reflectance) (Identafi® 3000, Tirmira, Houston, TX). This uses autofluorescence and reflectance multispectral technology. Violet light fails to absorb in abnormal tissue and fails to admit very low blue fluorescence, appearing dark brown or black. Amber light is absorbed by hemoglobin in blood and is used to delineate vasculature with tissue reflectance.
6. HPV screening (OraRisk® HPV test, Oral­DNA® Labs, Quest Diagnostics, Madison, NJ). This test analyzes a saline mouth rinse sample using DNA amplification by polymerase chain reaction (PCR) assay for the presence of HPV infection.

A detailed patient history of symptoms, risk factors, environmental or occupational exposures including tobacco and alcohol use, medical and surgical history, and family history is obtained and recorded prior to physical examination.

Components of the physical examination for the head and neck cancer patient include the following: 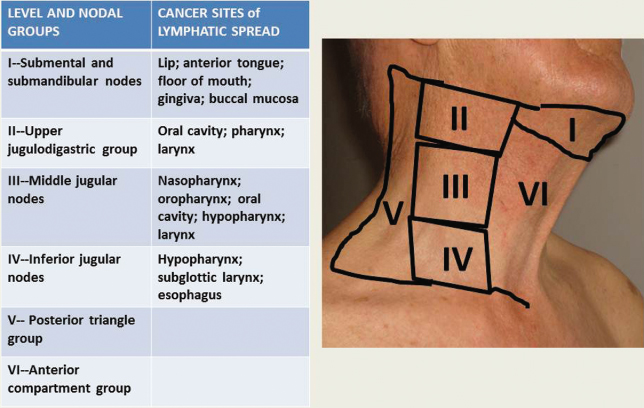 There are no mandated laboratory tests in the diagnosis of an HNSCC. However, cancer patients undergoing chemotherapy may require a complete blood count with white cell differential; basic metabolic, r/>