Because the nervous system comprises the brain, spinal cord, and spinal and peripheral nerves, functional capacity and life itself may be lost when disease or damage occurs. Neurological diseases/conditions can be classified in 12 major categories as described in the International Classification for Diseases (ICD)-10, Chapter 6: Diseases of the Nervous System.1 This chapter will review the most common and representative neurological disorders that dentists are likely to see in dental practice with the exception of the Alzheimer’s disease (AD) and other dementias, which will be discussed in Chapter 18.

MS, the most common autoimmune disease of the central nervous system (CNS), is a complex neurological condition. The pathological hallmark of MS is the plaque, which is an area of demyelination along an axon, limited to the white matter of the CNS and randomly located in more than one area of the brain or spinal cord.

A CVA is a serious and often fatal neurological event occurring when the blood supply to a part of the brain is suddenly interrupted, resulting in necrosis, or “infarction,” of the affected tissue. If the blockage of the artery is temporary and blood flow is quickly restored, the brain may recover quickly. It can also cause mild to severe disabilities, and possibly death hours, days, or weeks after the initial stroke event. Death varies based on age and type of stroke:

Stroke is the leading cause of serious, long-term disability in the United States. Approximately 50% who survive the acute period (first 6 months) are alive 7 years later.

The most common disease of motor neuron diseases, ALS, also known as Lou Gehrig’s disease, after the famous baseball player who acquired this disease in the 1930s in the prime of his career at age 36, involves progressive dysfunction of the nerves from the spinal cord and brain controlling voluntary muscle movement.

Epilepsy (and Other Seizure Disorders)

The term “epilepsy” refers to a group of disorders characterized by chronic, recurrent, paroxysmal seizure activity; altered consciousness; or involuntary movements caused by abnormal and spontaneous electrical activity in the brain. Seizures may be accompanied with motor manifestations (convulsive) or may occur with other changes in neurological function (sensory, cognitive, and emotional). Symptoms are produced by excessive temporary neuronal discharges, which result from intracranial or extracranial causes. Epilepsy can occur as a result of trauma or be a developmental condition.

Epileptic seizures are divided into two major classes: partial, subdivided into simple and complex, and generalized based on clinical and electroencephalographic (EEG) features.3

Generalized seizures begin with a widespread, excessive discharge involving most or all of the brain at the same time. They are divided into several types, including the following:

Epidemiologic aspects of the selected conditions are listed in Table 14.1.

Table 14.1. Epidemiology of Selected Neurological Disorders in the United States 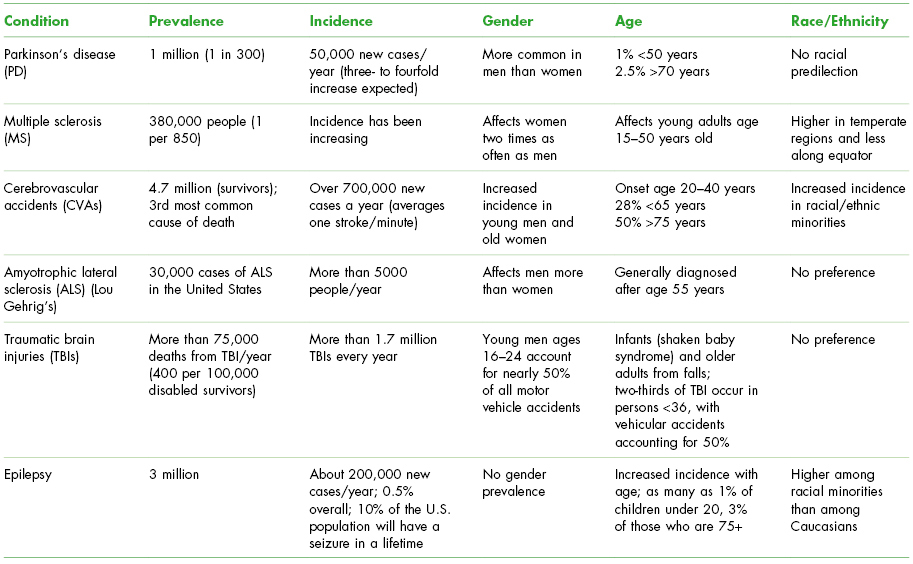 The cause of PD is unknown, although several factors are associated with PD including viral infections, genetic mutations, stroke, brain tumor, and head injuries that damage specific cells affected by the dopamine in the brain. Certain environmental factors increase the risk of developing PD including exposure to manganese (such as miners or welders), mercury, carbon disulfide, certain agricultural herbicides, and certain drugs (contaminated heroin, neuroleptics such as phenothiazines and butyrophenones).

The etiology of MS is unknown; however, it is widely believed that the disease is triggered by an infectious agent that causes autoimmune-mediated inflammation leading to demye­lination and axonal injury. The area of demyelination initially disrupts the conduction of a nerve impulse, but with recovery, conduction is slowed and the refractory period is prolonged. Conduction along these segments is sensitive to temperature changes and may fail if the temperature rises. Affected areas of the brain may range in size from 1 mm to several centimeters in diameter. Demyelination from inflammation, most often of the optic nerve, brain stem, and cervical spinal cord, results in tissue destruction, swelling, and breakdown of the blood–brain barrier.5 A genetic component may exist, as the risk of a first-degree relative developing MS is two to four times that of the general population.

There are two main causes of stroke:

There are known risk factors for stroke, some modifiable (smoking, lack of exercise, physical inactivity, obesity) and others immutable (older age, people of color, male gender, family history). Other confounding risks, subject to medical management, include diabetes, hypertension, congestive heart failure, prior stroke, high cholesterol, atrial fibrillation, carotid stenosis, and possibly periodontitis due to the effect of inflammatory products (C-reactive protein, interleukins, etc.) on systemic vasculature.6–8 Medications such as estrogens, pseudoephedrine and phenylephrine can also be risk factors for strokes by creating a hypercoagulable state or by increasing blood pressure. Having multiple risk factors greatly increases the risk of stroke.

A transient ischemic attack (TIA) is defined as a stroke that lasts less than 24 hours and has no residual effects. While most TIAs last less than 10 minutes, up to one-third of patients will have noticeable changes on brain imaging studies that indicate injury to the brain.

The type of deficit that occurs from a stroke is directly dependent on the size and location of the infarct or hemorrhage. If many small strokes occur in the brain, a person can develop a condition called multi-infarct dementia (MID). People with MID may have a wide variety of symptoms including mental deterioration with memory loss (dementia), walking problems, facial muscle problems such as difficulty talking and opening the eyelids, and weakness or numbness in one or more body areas.6

ALS is characterized by degeneration of the cells in both the upper and lower motor neu­rons of the spinal cord and cerebral cortex. Degeneration of descending pathways leads to weakness and spasticity of the muscles in the limbs, and eventually progresses to muscle atrophy and death from respiratory failure within 3–5 years in about 50% of patients. The cause of ALS is unknown, but a genetic abnormality is currently the focus of researchers.

The causes of head injury include falls, assaults, motor vehicle accidents, shaken baby syndrome, and sports concussions. With severe head injury, brain damage occurs because of the direct trauma to the brain resulting in disruption of the brain, shearing of axons, and intracerebral hemorrhage. Injuries occur at the site of trauma, and also the opposite side of injury, called a contre-coup injury. Contre-coup injuries result from acceleration/deceleration forces moving the brain within the skull. Secondary insults can occur due to brain edema, which causes intracranial pressure to rise and lead to cerebral herniation or hypoperfusion causing brain cells to die. Extradural hematomas, resulting from middle meningeal artery bleeding into the extradural space can cause rapid deterioration following an apparently good recovery from a head injury.

Epilepsy (and Other Seizure Disorders)

Epilepsy may occur when there are

Some of these disruptions, imbalances, and changes may develop early in life and may be related to early exposures and events. Others may be acquired later.

Conditions and events that may lead to epilepsy are:

Beyond epilepsy, there are a number of medical conditions such as having a high fever, low blood sugar, alcohol or drug withdrawal, and immediately following a brain concussion, that can cause seizures. For people who experience a seizure under such circumstances, without a history of seizures at other times, there is only the need to treat the underlying medical condition that caused the seizure.

Seizures in epilepsy can be evoked by specific stimuli. Approximately 1 of 15 patients reports that seizures occurred after exposure to flickering lights, monotonous sounds, music, or a loud noise. Syncope as occurring in the dental setting and low oxygen to the brain, are also known to trigger seizures.

A detailed health history will help to determine the stability of the specific disorder and the frequency or nature of medical care received. For example, how long an epileptic patient has been seizure free, should indicate that he or she is under good control. Similarly, the medical history will include medications used to treat the neurological condition, and dentists should know their actions, interactions (if any) to dental medications and local anesthetics used, and side effects or adverse reactions to expect (such as xerostomia).

A dental consultation should be routine as many of the medications used in managing neurological conditions have adverse and detrimental oral side effects such as dry mouth and gingival overgrowth that require dental management. Medical providers may identify drooling in late-stage PD patients and request dental intervention. Similarly, stroke patients may need modified preventive oral care regimens to accommodate to functional disabilities.

Invasive or oral surgical dental interventions should be planned with the input of the medical team or, in most cases, the neurologist. For some conditions, such as stroke, elective dental care should be deferred until risk factors (such as underlying hypertension) are under control. For other conditions, such as ALS, MS, epilepsy, and PD, dental care should be coordinated with the time of day that the person’s movements or symptoms are best managed.

The classical features of PD are known by the acronym TRAP:

In late disease, there may be cognitive impairment of memory and concentration, global dementia, mood disturbances, insomnia, and fatigue. The frequency of dementia is controversial but may occur in as many as 25% of PD patients. There is no specific laboratory test for PD.

There is no standard medical treatment for PD. Listed in Table 14.2 are the six classes of drugs commonly used to treat the patient’s symptoms once they cause lifestyle problems such as slowness or imbalance (falls). Dopaminergic drugs are reserved for advanced PD because their activity lessens with long-term treatment and their use can result in long-term complications including psychosis. Other therapies include protein-restricted diet, exercise to maintain muscle tone, neurosurgery includ­ing deep brain stimulation and thalamotomy (removing the thalamus) or pallidotomy (removing the globus pallidus), and transplantation of fetal embryonic cells.10

Table 14.2. Medications Used in the Management of Parkinson’s Disease (PD)a 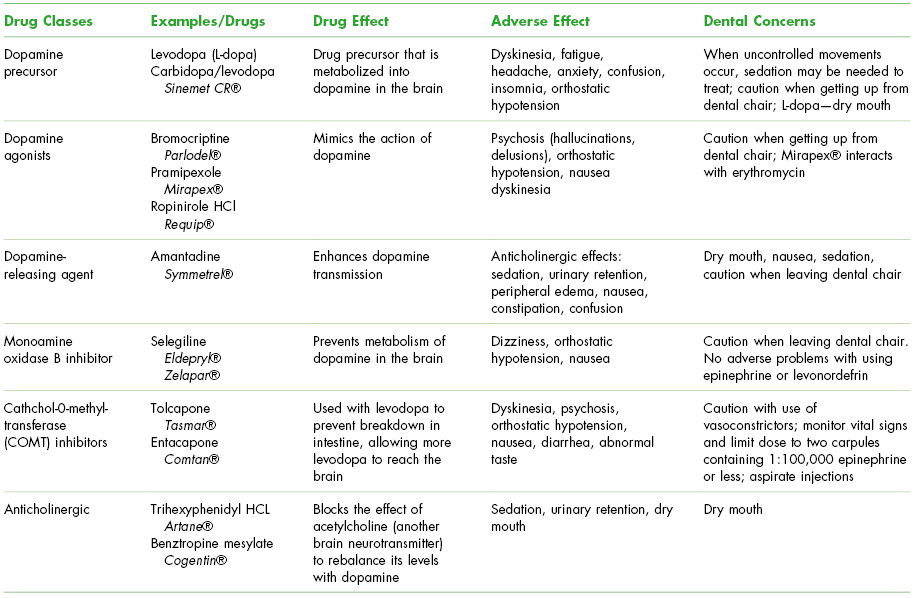 Common presenting symptoms include the following5:

There are two main patterns of disease as seen in Fig. 14.1: 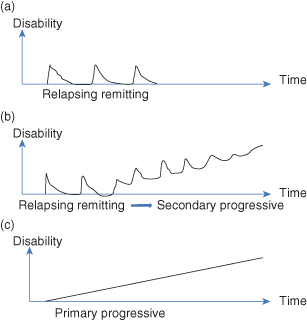 There is no known cure for MS. Multiple treatments are directed toward relief of symptoms.

Medications used to manage the symptoms or prevent relapses of MS are seen in Table 14.3. 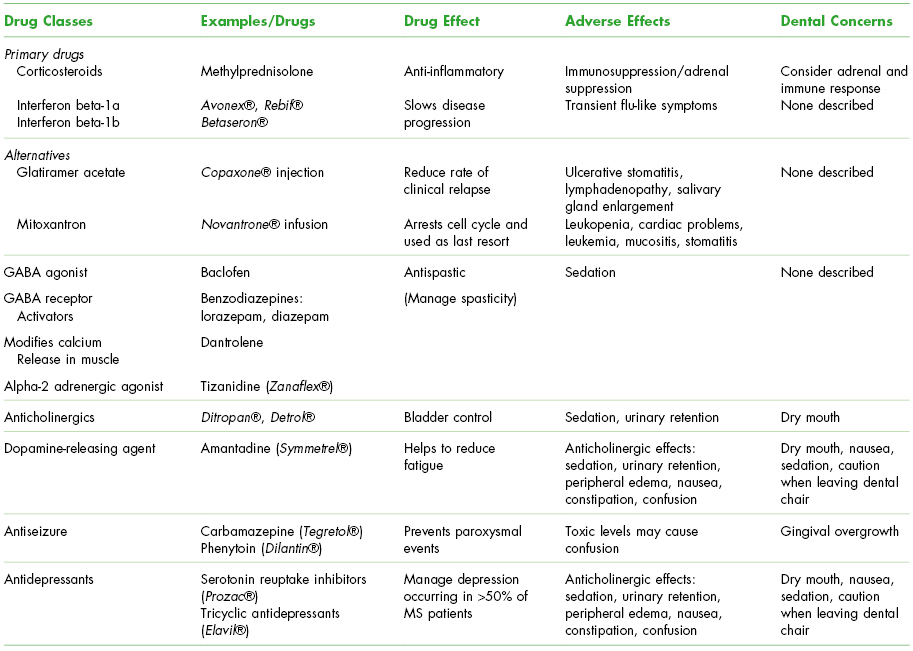