18 Care of the elderly

Care of the elderly

Geriatric medicine and psychiatry of old age are specialties that deal with the physical and mental problems associated with later life. All general dental practitioners will see large numbers of elderly patients and they need to have an understanding of the effects of ageing, illness and disability that will impact on the delivery of dental care to this group.

Our population is ageing, and the survival curve in developed countries has changed markedly in the past century. In the 19th century (and in many developing countries even now), there were high death rates in childhood. Death rates levelled off in adult life, but rose steeply again after middle age, such that survival to what we would now consider to be old age was uncommon. Nowadays, deaths in childhood and young adult life are few, and survival falls more steeply in old age (Fig. 18.1).

Life expectancy at birth continues to rise, despite repeated predictions over the years that it may be reaching a ceiling. In western Europe, the proportion of the population over 60 is projected to rise from 21% in 2000 to 34% in 2050, while the proportion over 80 will rise from 3.6 to 10.5% over the same period. It is this over 80 age group that suffers the greatest burden of illness and disability, and which therefore needs the most care and consideration when delivering all aspects of health care.

Ageing is a process we all recognise, but often find hard to define. One attempt at a definition of ageing is ‘the gradual development of changes in structure and function that are not due to preventable disease or trauma, and that are associated with decreased functional capacity and an increased probability of death’. This ‘purist’s’ definition satisfies the bio-gerontologist who studies the molecular and cellular process of ageing itself, and considers them separate from the effects of disease or injury. The fact remains that older people suffer from multiple health problems, and some of the more common medical problems of old age are listed in Table 18.1.

Features of illness in old age

Although the conditions listed are not the exclusive preserve of the elderly, there are certain features of illness in old age that necessitate a different approach compared with that used for the younger patient.

Older people often present with atypical symptoms, or non-specific presentations of illness. For example, loss of appetite and weight may have many potential causes including physical illness such as cancer, mental illnesses including depression, and oral conditions affecting the ability to eat. It is therefore important to obtain as clear a picture as possible of the presenting complaint, including a corroborative history from someone who knows the patient well. A range of investigations may be required to make a clear diagnosis.

Many older people have several chronic medical conditions, and therefore require multiple medications. Both the conditions and the drugs can interact in the way they affect the patient. For example, many of the drugs used to treat heart disease lower the blood pressure. The autonomic cardiovascular reflexes, which maintain a constant blood pressure during changes in posture, deteriorate with age. Therefore, drug treatment of angina or heart failure may cause a major drop in the blood pressure on standing up, known as orthostatic hypotension, resulting in faints or falls and consequent injury. 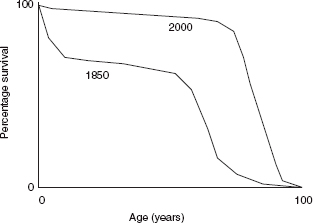 Older people’s resistance to a whole range of insults is reduced. They will fall more easily if pushed, develop hypothermia in a cold environment, resistance to infection is diminished, and they are more prone to metabolic disturbances as a result of, for example, dehydration. Similarly, their processes of healing and recovery are also diminished, resulting in prolongation of the effects of illness.

Many of the chronic diseases of old age, such as arthritis or glaucoma, have permanent effects on the patient’s ability to undertake basic activities of daily living such as preparing meals, shopping, or even dressing and using the toilet. Relatively minor acute illnesses in a frail older person can result in complete loss of ability to cope at home, requiring emergency hospital admission. A respiratory infection, for example, may cause confusion and fatigue such that the patient takes to their bed, stops eating and drinking and becomes seriously dehydrated.

With their burden of chronic illness, together with the reduced functional capacity of ageing itself, many older people suffer long-term incapacity. The ungainly term ‘giants of geriatrics’ has been used for a list of common problems that afflict the elderly:

Tags: Textbook of Human Disease in Dentistry
Jan 5, 2015 | Posted by mrzezo in General Dentistry | Comments Off on 18 Care of the elderly
Premium Wordpress Themes by UFO Themes
WordPress theme by UFO themes