Primary deep somatic pain emanates from either the musculoskeletal structures or the visceral structures of the body. Musculoskeletal pain derives from the structures that give physical form and stability to the body as well as provide for the biomechanical functions that accomplish posture, locomotion, and other useful working movements. Visceral pain derives from components of the supply and maintenance system that subserve the musculoskeletal structures. The visceral system has to do with oxygen supply, nutrition, metabolism, detoxification, and elimination of waste products. It is composed of organs of many different types, glandular structures, and a network of different kinds of vessels to transport substances throughout the body. Whereas sensation emanating from the musculoskeletal structures relates to more or less conscious volitional biomechanical functions, sensation initiated in visceral structures is largely unconscious and serves to facilitate ongoing automatic metabolic functioning of the body. Pain of musculoskeletal origin therefore relates to biomechanical function as a graduated response, while pain of visceral origin commands attention only to warn that all is not well within. The clinical symptoms displayed by the two kinds of deep somatic pain are sufficiently different to make them identifiable. This is of considerable importance diagnostically.

In addition to the clinical characteristics of deep somatic pain, all such visceral pains display features by which they may be recognized: first, the pains are of threshold type and do not yield graduated responses, and second, the pains are influenced very little by biomechanical function. Visceral pains are usually not accompanied by distinctive evidence of dysfunction other than that induced by the inhibitory influence of pain. Cervero1 described visceral pain as being accompanied frequently by generalized increased excitability of the central nervous system (CNS), which is expressed as general discomfort, tenderness of the skin, skeletal muscle spasms, and autonomic reflexes. He confirmed that visceral pain was mediated by visceral afferents in sympathetic nerves.

The mechanism of visceral pain has been described by several authors.2,3,4,5,6,7,8,9 Ordinarily, sensory information transmitted by afferent neurons of the visceral nervous system remains well below conscious levels. It serves to monitor the involuntary muscle action of vessels, glands, and organs. It reports unusual sensation occurring in the lining membranes of organs and cavities. It helps regulate the automatic functioning of the body by supplying the CNS with a constant inflow of information. When such sensation becomes noxious, pain is felt. Visceral afferent fibers of both the sympathetic and parasympathetic type are known to mediate pain.8 Visceral pain usually has a distinct stinging or burning quality. It is said that protracted visceral pain9 tends to provoke vasomotor effects, local edema, and trophic changes.

It appears that conscious visceral sensation is normally of a very low order of intensity, since the visceral afferents have high-threshold receptors. However, the presence of inflammation may reduce this threshold considerably so that conscious pain becomes evident with little added provocation. For example, the stomach yields minimal sensation other than when it is very empty or very full. But an inflamed gastric mucosa causes the normal stomach contents to excite painful sensation, usually described as heartburn.

Visceral pain in the maxillofacial region is not rare. Esophagitis and pharyngitis have the dull, diffuse, burning quality of visceral pain. Pain in the nasal and ostium maxillare mucosa has a similar burning quality.3,10 The major salivary glands as well as the numerous glands of the lymphatic system, the skin, and the mucous membranes are other sources of this type of pain.

Some pains arising in the maxillofacial region are mediated by sympathetic afferent fibers that do not enter the CNS via any cranial or cervical nerve sensory root. Rather, these visceral fibers leave the orofacial structures and pass through the cervical sympathetic chain and finally enter the CNS via the sensory roots of the upper thoracic spinal nerves. Head and neck pains mediated by this route cannot be arrested by division of any or all cranial and cervical spinal sensory roots. Such pains are arrested by analgesic blocking of the stellate ganglion, through which such afferents pass, even though they undergo no synapse prior to reaching the CNS.9,11,12

For purposes of description, visceral pains have been separated into three groups: pulpal odontogenous pains, vascular pains of the mouth and face, and other visceral pains, including those of mucosal, glandular, ocular, and auricular origin. Pulpal pains have already been reviewed in chapter 11. Since vascular pains are a common and important type of pain originating from the orofacial structures, an entire chapter will be devoted to them (chapter 16). This chapter will review visceral pains that have their origin in mucosal tissues of the pharynx, nose, and paranasal sinuses. This chapter will also review pains from glandular, ocular, and auricular structures (Fig 15-1). 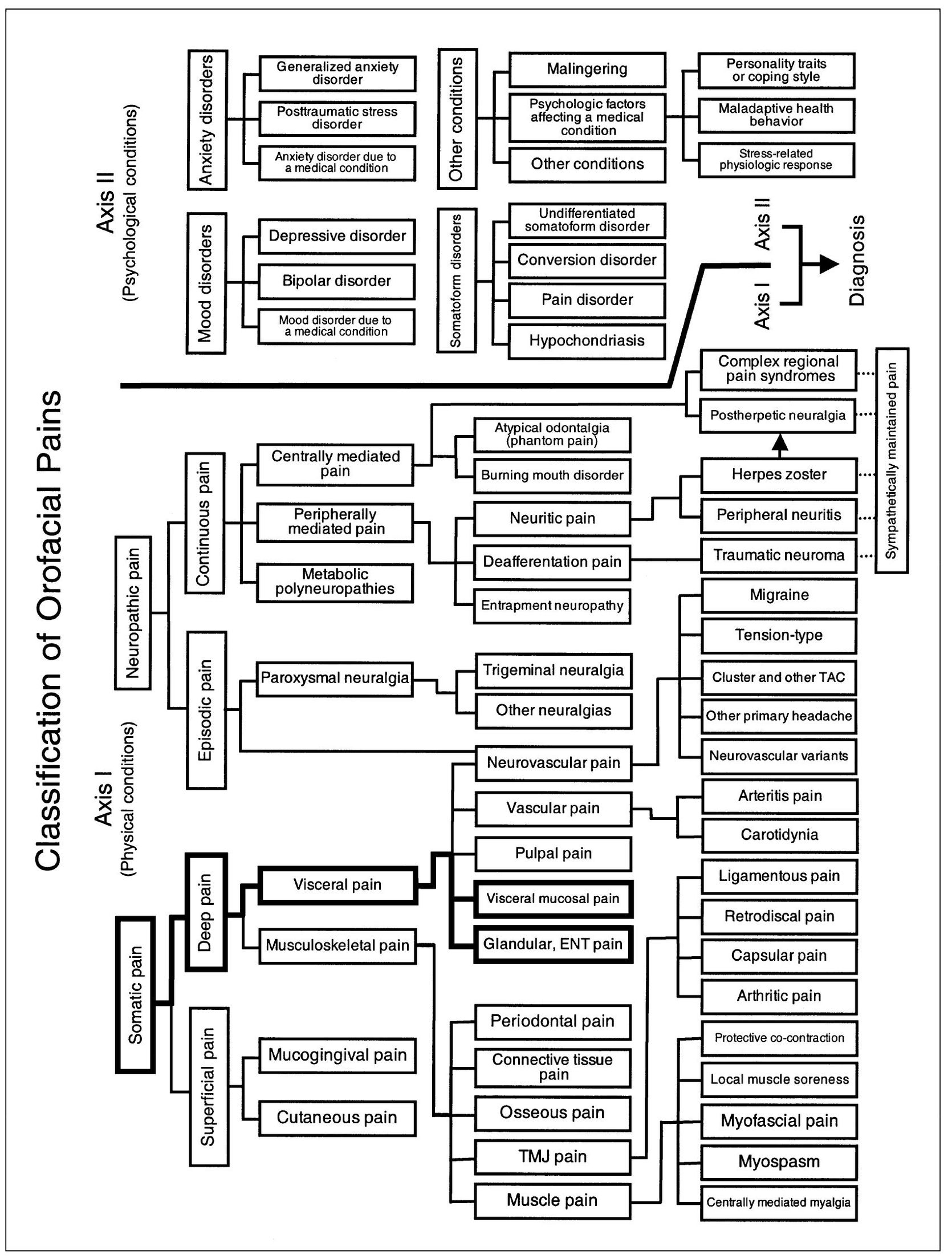 While pain emanating from the oral mucogingival tissues is exteroceptive in character and displays clinical characteristics of the superficial somatic type, pain from other mucosal structures of the face is definitely interoceptive in character and exhibits the clinical characteristics of deep pain of the visceral type. This refers particularly to the mucosal linings of the pharynx, the nasal cavity, and the paranasal sinuses.

Ordinarily, sensory perception of visceral mucosa linings remains below conscious levels. This rule applies especially to the more deeply situated structures. The closer such tissues are located to external environmental sources of stimulation, however, the more responsive they are to all stimuli and the more conscious such sensation becomes. For example, the nasal mucosa is more sensitive to low-level stimulation than is the pharyngeal mucosa, while that of the esophagus is less reactive. The fine sensibility of nasal mucosa applies also to the ostium maxillare, but the lining membrane of the maxillary sinus remains resistant to all stimuli. The external portion of esophageal mucosa is highly responsive to stimuli of threshold intensity, but the more deeply situated portion is nearly insensible to all noxious stimuli. It should be noted that there is a transitional zone where the oral mucogingival tissue joins the pharyngeal mucosa, and symptoms of both superficial somatic and deep visceral pain categories may be displayed.

An appreciation of the different types and degrees of sensibility of the lining membranes of the oral, nasal, and pharyngeal structures is needed to understand the nociceptive sensations that emanate from these tissues.

The normal inflow of sensation from visceral mucosa serves to regulate automatic functioning. Several reflex mechanisms are recognized: irritation of the nasal mucosa excites the sneeze reflex, the pharyngeal mucosa initiates the swallowing and gag reflexes, upper esophageal mucosa may induce esophageal spasm, and irritation of the upper tracheal and laryngeal mucosa stimulates the cough reflex. When mucosal stimulation becomes noxious, burning pain is felt.3,5,6,8,10,13 It is said that continuing visceral pain tends to provoke vasomotor effects, local edema, and trophic changes.9 The normally high threshold level of sensibility is lowered in the presence of inflammation so that nociceptive impulses may be generated by otherwise nonnociceptive stimuli.

Like other forms of deep pain, visceral mucosa pain tends to initiate central sensitization or excitatory effects. Many times, the secondary symptoms predominate, while the primary pain input remains silent or goes unnoticed. Some orofacial pain disorders are expressed almost exclusively as secondary central excitatory effects. Caution should be exercised in differentiating such effects from the true source of primary input.

Ordinary pharyngitis is usually viral in origin and occurs in conjunction with nasal and laryngeal symptoms. Pain on swallowing is characteristic. Central excitatory effects include referred pain, especially with swallowing. The reference zone is usually deep in the ear, and the pain is sensed as sharp and lancinating. Secondary hyperalgesia may be felt as a deep palpable tenderness in the throat, larynx, neck, or face or as superficial touchiness of the facial skin or scalp. Secondary autonomic symptoms may include puffy swelling of the eyelids, lacrimation, and nasal secretion. Sneeze and cough reflexes are active. Referred headache is common.

Streptococcal pharyngitis is typified by sore throat, fever, acutely inflamed pharyngeal mucosa, and referred pains including headache. Cervical and submandibular lymphadenitis is present. Laryngitis, coughing, and nasal congestion are not the result of the streptococcal infection; when present, other etiologic agents coexist. Definitive diagnosis rests on laboratory examination to identify the group A beta-hemolytic organism.

Tonsillitis is an acute inflammation of the palatine tonsils that results usually from viral and/or bacterial infection.14 Severe pain on swallowing, fever, malaise, headache, and regional lymphadenopathy are common. A differential diagnosis includes diphtheria, Vincent angina, and infectious mononucleosis, each of which requires laboratory examination for identification.

Pharyngeal mucosa pain should be differentiated from Eagle syndrome, glossopharyngeal neuralgia, geniculate neuralgia, and Ramsay Hunt syndrome. Eagle syndrome is characterized by an elongated styloid process or calcification of the stylohyoid ligament. The symptoms are persistent raw throat, ear pain, and pain and difficulty with swallowing. The pain is often increased with head movement, and limited jaw movement may be present.15,16,17 Glossopharyngeal neuralgia is typical neuropathic pain of the paroxysmal neuralgia type that is triggered by throat movement incidental to swallowing, talking, and chewing food. Geniculate neuralgia is an extremely rare neuropathic pain of the paroxysmal neuralgia type that is felt as sharp lancinating pain within the depths of the e/>