The use of microvascular free tissue transfer has become an established and routine reconstructive option in head and neck surgery. Furthermore, it has been embraced by oral and maxillofacial units worldwide wherein free flap reconstruction of such defects is now considered gold standard of care.1 Microvascular reconstructive surgery remains both technically challenging and operator sensitive, yet reported success rates of free flap surgery have consistently been between 96% and 99%.2–5

Despite continual refinement in microsurgical techniques, technological advances, and accumulation of experience, a small percentage of free flaps fail in most major centers. Unlike other less technically demanding reconstructive options, failure in microsurgery represents a potentially devastating situation for both patients and surgeons.6 For patients, psychological and physical suffering escalates, in addition to prolonged hospitalization, further surgery, and increasing treatment costs. Patient comorbidities and additional general anesthesia may adversely impact patient recovery and outcome. For surgeons, free flap failure represents a unique and stressful situation where a persistent defect requires coverage with fewer donor sites available, especially if composite tissue is needed to achieve optimal functional and aesthetic results. Furthermore, recipient vessel availability for reanastomosis in the vicinity of the previous failed anastomoses is frequently compromised. The original defect size is often larger following necessary debridement, and critically exposed vascular structures that need prompt coverage may complicate the situation. This chapter will aim to outline the various complications associated with composite bone flaps for head and neck reconstruction with reference to the literature, and provide strategies to avoid and mange these where appropriate.

The radial forearm flap has enjoyed much popularity especially for soft tissue reconstruction; however, its osteocutaneous counterpart has been superseded by other bone flaps due to the poor volume bone stock and significant donor site morbidity.

Vascular insufficiency of the hand following harvest of the radial forearm flap remains the most devastating complication. Numerous reports exist supporting this phenomenon despite normal preoperative Allen’s testing.7,8 Such ischemic events frequently arise from an incomplete superficial palmar arch with absent branches to the thumb and index finger combined and no communication with the deep palmar arch.9 Management requires immediate surgical exploration and reestablishment of radial flow with vein graft reconstruction. Other causes include too tight a skin closure and compression from the forearm dressing, which produces a compartment syndrome. Limiting the splint to only volar coverage and maintaining exposure of the hand for postoperative monitoring can avoid this.

The radial osteocutaneous flap initially became established as the first reliable free flap for reconstruction of mandibular continuity defects.10 This flap has rapidly lost popularity and has been superseded by superior bone flaps due to its limited bone stock and significant incidence of postoperative radius fracture. Early reports showed an incidence of fracture as high as 28% to 43%,10–13 while larger series reported incidences of 23% (Ref. 14) and 31%.15 Refinements in osteotomy technique and prophylactic internal fixation have reduced this functionally disabling complication to 15%.16 Serious frequent sequelae of pathologic radius fracture include wrist deformity, and reduced wrist and grip strength from impaired flexor pollicis longus function. Biomechanical studies have confirmed loss of 75% or more of the strength of the human radius in bending,17 and the sheep tibia in torsion,18 when 50% of the circumference is removed. Beveling the proximal and distal osteotomy cuts has a minimal strengthening effect on the remaining radius of up to 5%.18 Postoperative radius fracture can be minimized by strictly adhering to bony dimensions not exceeding 30% of its cross-sectional area, and 40% of its circumference.19 Additional radius protection can be afforded by external support with an above-elbow cast or preformed splint to ensure 6 to 8 weeks of immobilization; however, fracture rates remain as high as 19%.20 Prophylactic internal fixation with dynamic compression plate (DCP) is the most effective method of increasing both the torsional and bending strength of the osteotomized radius, supported by several large clinical series.21–24 Both anterior and posterior positions of the plate are equally effective in reducing overall fracture rates to 2.6% with the posterior position providing greater reinforcement and significantly fewer healing problems.22 Secondary revision surgery in the above instances is very uncommon necessary in only 0.4% of cases.

Neurologic injury resulting from radial forearm flap harvest varies in the literature but is generally significantly worse in the osteocutaneous flap.25 Direct median and ulnar nerve injury are uncommon; however, when present, they result in significant patient disability. Richardson et al.,25 in their prospective study, noted a 36% incidence of reduction in grip strength, pinch strength, and range of wrist movement compared with the nonoperated control arm and the fasciocutaneous group (16%). More importantly, functional impairment was worse in patients suffering radius fracture following composite flaps. Other authors have found similar results with respect to functional morbidity.13,14,26 Sensory deficit from radial forearm flap harvest remains common with similar incidences in both composite and fasciocutaneous flap variants, and in subfascial and suprafascial dissection methods.27 Objective and subjective sensory deficits are greatest in the radial nerve distribution compared to median and ulnar nerve dermatomes.25,28 Kerawala et al.28 identified a 76% incidence of subjective sensory loss in the radial nerve distribution with 84% of patients exhibiting objective evidence of sensory deficit associated with pinprick, light touch, temperature, and two-point discrimination modalities. Painful neuromas and dysaesthesia are relatively infrequent with a 2–10% incidence. Sensory recovery appears to improve with time, with most long-term studies reporting resolution at about 12 months postoperatively.25,28 Thorough familiarity of the regional anatomy and cognizance of the location of the superficial branch of the radial nerve can avoid this complication.

This remains the most problematic complication in both the composite and fasciocutaneous radial forearm free flap donor site defect and has been one of the most intensely studied areas.29,30 Numerous authors have demonstrated statistically significant objective functional and aesthetic deficits in the form of tendon exposure, contracture, and pain resulting from skin graft loss and delayed wound healing. Split thickness skin graft failure ranges from 19% to 53% in the literature. Tendon exposure has been reported in 13% to 33% of patients and tendon adhesion in 18.7% to 33%.27 Full thickness skin graft take has a reported success rate of 93%, and produces superior aesthetic results.30 Other published methods of skin donor site repair include preoperative tissue expansion, purse string wound closure,31 prefabricated fascial split thickness skin grafts,32 allogenic dermis,33 and negative pressure vacuum wound dressings.34 However, reported numbers in these series are small, and superior outcomes to conventional skin grafting are not demonstrable. 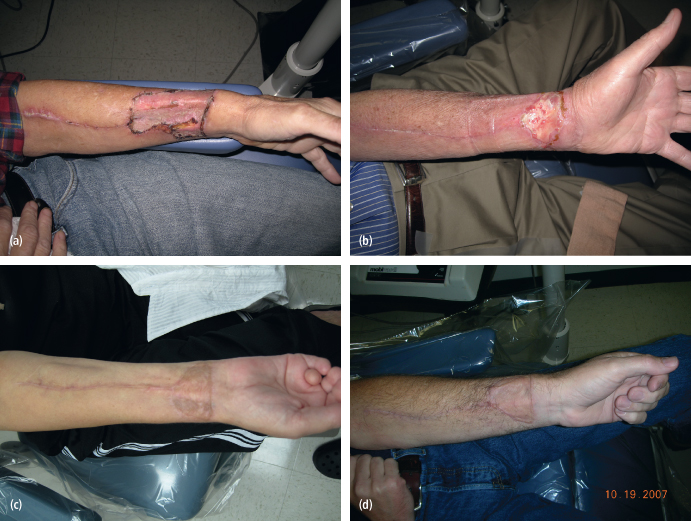 The first successful microvascular transfer of a fibula free flap for mandibular reconstruction in the canine model was in 1974.35 In 1975, Ian Taylor first reported on free fibula transfer for reconstruction of lower extremity defects.36 Later, Hidalgo adapted this flap for mandibular reconstruction.37 Since that time, the fibula flap has achieved universal popularity as the bone flap of first choice for most maxillofacial defects. Its thick cortical bone, tubular shape, long length (up to 25 cm), associated skin paddle, tolerability to multiple bony osteotomies, long vascular pedicle, and large vessel caliber make it well suited to facial bone reconstruction.38

Vascular compromise of the foot is the most devastating complication arising from fibula free flap harvest. The anatomic basis for this resides in congenital or acquired vascular anomalies of the lower extremity vasculature. Normally, the peroneal artery contributes minimally to the vascular supply of the foot with the dominant supply provided by the anterior and posterior tibial vessels. In 7–10% of cases, these two normally dominant vessels may be significantly attenuated or individually absent, and the primary vascular supply is derived from the peroneal artery (peroneal arteria magna). Congenital absence of the peroneal vessels is rare with a population incidence of 0.1%.39 Acquired vascular insufficiency of the lower extremities is frequently associated with atherosclerosis, particularly in elderly patients. Preoperative imaging with computed tomography (CT) angiography, magnetic resonance (MR) angiography, or routine angiography can avoid limb-threatening ischemia. Compartment syndrome from wound closure under excessive tension can produce disastrous ischemic complications.

Significant early and late morbidity relating to gait disturbance is reported by numerous authors, although objectively measurable parameters frequently exceed subjectively perceived morbidity.40 Despite reports of alterations in gait, paresis of the flexors of the toes and hallux, and sensitivity changes, the majority of patients are able to ambulate normally. The loss of the fibula and interosseous membrane, which form the origin of the deep muscles, produces muscle disturbance with consequent loss of function.41 Antalgic gait is a common phenomenon following fibula flap harvest with gait analysis studies demonstrating a characteristically short stance phase of the affected lower extremity.42 Foot drop is an uncommon but disabling complication that impacts markedly on ambulation and arises from surgical trauma to the extensor hallucis longus musculature.43 Ankle instability and stiffness have also been reported and arise when less than 6 cm of distal fibula is preserved, leading to external rotation of the talus beneath the tibial plateau and resultant valgus deformity.44 Isokinetic studies reveal significant decreases in ankle mobility and strength during all four ankle motions. Knee mobility remains unaffected; however, diminished strength during knee flexion and extension on objective assessment is apparent.41,42

Almost all patients develop limited flexion capability of the hallux consistent with inclusion of the flexor hallucis longus muscle with the flap. This phenomenon does not interfere with ambulation.45 Damage to branches of the peroneal nerve and posterior compartment muscle scarring are additional causes.

Primary closure of the skin paddle donor site is often possible when skin paddle widths are less than 5 cm. Larger skin paddles typically require the use of split thickness skin grafts from a second donor site for defect coverage. Partial or total split thickness skin graft loss is estimated to range from 17% to 28% of cases, with partial necrosis of the peroneal tendons and/or muscles in up to 5%. Donor wound infections occur in about 7% of patients.48 Optimizing graft take is facilitated by careful application of pressure dressings and lower leg immobilization with splint for 10 days postoperatively. Intravenous broad-spectrum antibio/>