Figure 15.1 (A) Assessment of lower lip fullness in relationship to Ricketts E-line: (i) normal, (ii) retrusive and (iii) full lower lip. (B) The nasolabial angle may be (i) normal, (ii) obtuse due to a poor upper lip position, (iii) obtuse due to an upwardly sloping columella and normal upper lip position and (iv) acute due to a protrusive upper lip. (C) The lower lip line can influence incisor position. (i) A high lower lip line is associated with retroclined upper incisors and (ii) a low lower lip line is associated with incisor proclination and poor stability of overjet correction. (D) Excessive muscular activity to close the lips is indicated by puckering of the chin due to mentalis contraction. (E) A number of factors determine lip competency. (i) Competent lips. Incompetent lips due to (ii) an increased LAFH, (iii) mandibular retrognathia, (iv) a short upper lip and (v) incisor protrusion. (F) Methods of achieving an anterior oral seal: (i) lip to lip, (ii) tongue to lower lip, (iii) lower lip to palate and (iv) tongue to upper lip contact. (G) a vigorous digit sucking habit can leave a tell tale colour on the digit sucked where it rubs against the incisal edges. 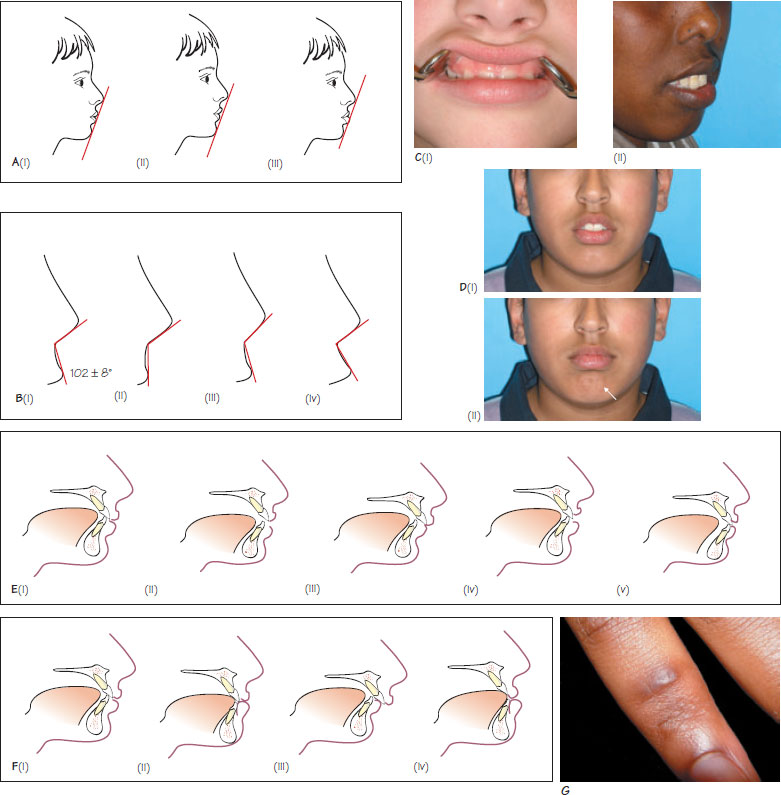 As well as the skeletal pattern, the facial soft tissues can influence tooth position. If there is an underlying skeletal discrepancy, the soft tissues may help to guide teeth into a more favourable position (dentoalveolar compensation) so that the occlusal relationship is improved. Soft tissue evaluation should involve examination of:

The following aspects of the lips should be examined:

Lip fullness maybe classified as protrusive, straight or retrusive. The relationship of the lips to Ricketts Esthetic line (E-line), which runs between the tip of the nose and chin point, can help with this assessment (Figure 15.1A). If the lower lip lies anterior to the line it is considered protrusive, if it lies 0–2 mm behind it is normal and if >2 mm posterior to the line it is retrusive. If the nose is large, so that the E-line is displaced anteriorly, this may give a misleading assessment. The lips tend to become less protrusive with growth as the nose and chin point develop (see Chapter 6).

The nasolabial angle (NLA), formed by a tangent to the upper lip and columella of the nose, can give an indication of upper lip position (Figure 15.1B). In Caucasians, the upper lip should slope/>