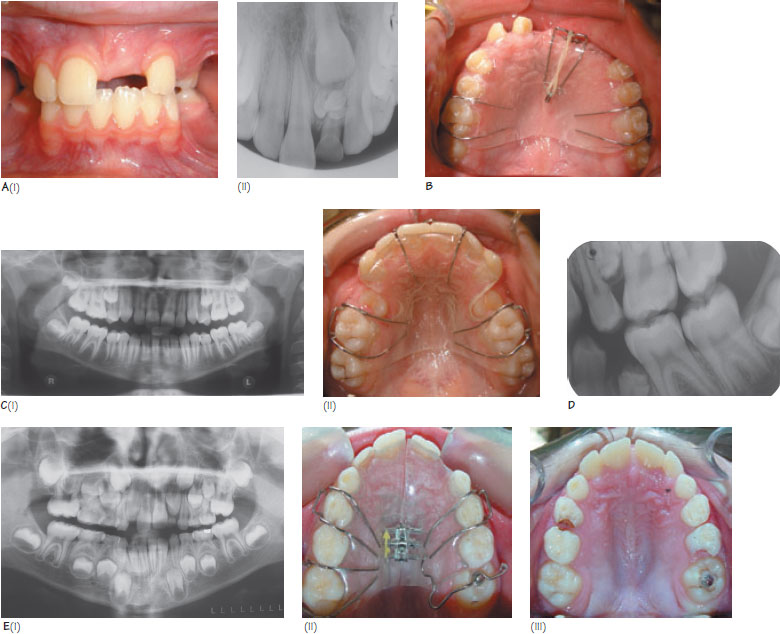 Impaction can be defined as the failure of a tooth to erupt, usually due to crowding or an obstruction (e.g. supernumerary tooth, fibrous tissue). Rarely a tooth may fail to erupt due to failure in the eruptive mechanism (primary failure of eruption, Chapter 9). Some medical conditions (e.g. cleidocranial dysplasia, Table 13.4iii) can be associated with multiple impactions. The aim of this chapter is to give a brief overview of impacted teeth. Chapter 32 focuses on maxillary canine impaction.

The prevalence of impacted maxillary central incisors is reported to be 0.13%. The most common aetiological factor is the presence of supernumerary teeth but other factors such as trauma (e.g. dilaceration), retention of primary incisors and impaction against fibrous tissue may be important. Impaction should be suspected if the contralateral incisor has erupted more than six months previously or if the lateral incisors have erupted before the central incisors (Figure 31.1A). In such cases a radiographic assessment using an upper anterior occlusal or periapical view(s) is recommended.

The first principle of management is to ensure that adequate space is present to accommodate the impacted tooth (9 mm for an average incisor). This may involve extraction of retained deciduous teeth. Secondly, any cause of obstruction should be removed. Tuberculate supernumeraries are more commonly associated with incisor impaction than conically shaped teeth (see Chapter 34). In up to 75% of cases, the impacted incisor may erupt spontaneously within 16 months of removal of the supernumerary. Spontaneous improve/>