Figure 21.1 (A) (i & ii) Early loss of the lower right first deciduous molar has resulted in space loss for the eruption of the first premolar and a significant shift of the lower dental centreline. (B) (i–v) Causes of midline maxillary diastema. (C) Management of bimaxillary proclination by incisor retraction, (i) The incisors are in a position of soft tissue balance between the lips and tongue (Equilibrium theory), (ii) Extraction of premolars and incisor retraction moves these teeth outside the position of soft tissue balance such that following treatment (iii) they procline with reopening of extraction spaces. 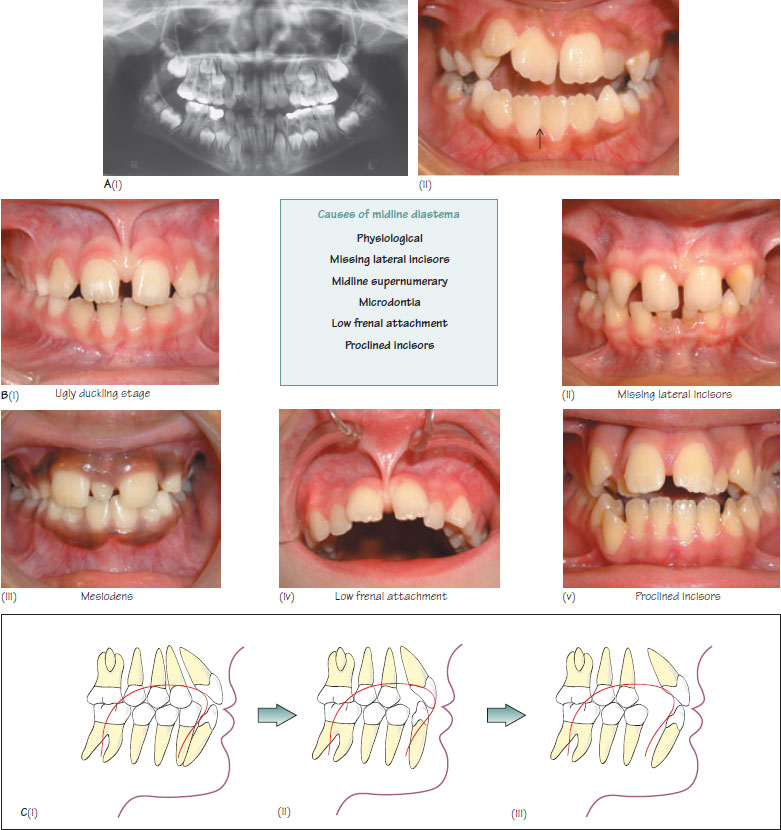 Although there is no anteroposterior malrelationship, there may be discrepancies in the vertical and/or transverse dimension. The molar relationship is variable and is influenced by the underlying skeletal pattern and if there has been early loss of deciduous teeth. There may be crowding or spacing within the arches.

Aetiology of Class I malocclusion

The skeletal relationship may be Class I, II or III. This is because if there is a Class II or III pattern associated with a favourable soft tissue environment, dento-alveolar compensation can result in correction of the incisor relationship.

In the transverse dimension, there may be mandibular asymmetry and/or the maxillary arch may be constricted giving rise to a posterior crossbite.

The soft tissues are not generally important in the aetiology of Class I malocclusion with the exception of patients with bimaxillary proclination. In such cases, the upper and lower incisors are proclined because the position of soft tissue balance has been moved forward by flaccid lip musculature and/or increased pressure from the tongue.

Tags: Orthodontics at a Glance
Jan 1, 2015 | Posted by mrzezo in Orthodontics | Comments Off on 21 Class I malocclusion
Premium Wordpress Themes by UFO Themes
WordPress theme by UFO themes