14: The quality of radiographic images and quality assurance

The quality of radiographic images and quality assurance

The factors that can affect the quality of radiographic images depends on:

• How the image was taken (radiographic technique)

• What image receptor was used (film or digital)

• How the visual image was created

The effects of poor radiographic technique are the same whatever type of image receptor is used. These technique errors have already been covered in detail in relation to the three main projections used in dentistry, namely: periapicals (Ch. 7), bitewings (Ch. 8) and panoramic radiographs (Ch. 12).

The creation of the visual digital image was described in Chapter 3, together with how computer software can be used to alter and manipulate the image with regards to contrast, brightness (degree of blackening), magnification, inversion, enhancement and pseudocolourization.

Creation of the black/white/grey image on film using chemical processing was also described in Chapter 3. These various images can, however, be affected by many other factors. This chapter therefore is designed for revision, bringing together and summarizing from earlier chapters all these various factors. It also includes a quick reference section as an aid to fault-finding of film-captured images. Various image faults are illustrated together with their possible causes. This is followed by a section on quality assurance and suggested quality control measures.

As mentioned in Chapter 1, image quality and the amount of detail shown on a radiograph depend on several factors including:

• Characteristics of the X-ray beam

This is the difference caused by different degrees of attenuation as the X-ray beam is transmitted through different parts of the patient’s tissues. It depends upon:

• Quality (voltage (kV) ) or penetrating power of the radiation beam.

This is an inherent property of the film itself (see Ch. 3). It determines how the film will respond to the different exposures it receives after the X-ray beam has passed through the patient. Film contrast depends upon four factors:

• The characteristic curve of the film

• Optical density or degree of blackening of the film

Stray radiation reaching the film either as a result of background fog, or owing to scatter from within the patient, produces unwanted film density (blackening), and thus reduces radiographic contrast.

As mentioned and illustrated in Chapter 1, the geometric accuracy of an image depends upon the position of the X-ray beam, object and image receptor (film or digital) satisfying certain basic geometrical requirements:

• The X-ray tubehead should be positioned so that the beam meets the object and the image receptor at right angles.

Characteristics of the X-ray beam

The ideal X-ray beam used for imaging should be:

• Sufficiently penetrating to pass through the patient, to a varying degree, and react with the film emulsion to produce good contrast between the various black, white and grey shadows (see earlier)

• Produced from a point source to reduce blurring of the image margins and the penumbra effect (see Ch. 3).

Sharpness is defined as the ability of the X-ray film to define an edge. The main causes of loss of edge definition include:

• Geometric unsharpness including the penumbra effect (see above)

• Motion unsharpness, caused by the patient moving during the exposure

• Absorption unsharpness – caused by variation in object shape, e.g. cervical burn-out at the neck of a tooth (see Chs 8 and 17)

• Screen unsharpness, caused by the diffusion and spread of the light emitted from intensifying screens (see Ch. 3)

• Poor resolution. Resolution, or resolving power of the film, is a measure of the film’s ability to differentiate between different structures and record separate images of small objects placed very close together, and is determined mainly by characteristics of the film including:

In practical terms, the various factors that can influence overall film-captured image quality can be divided into factors related to:

• The operator and radiographic technique.

As a result of all these variables, film faults and alterations in image quality are inevitable. However, since the diagnostic yield from radiography is related directly to the quality of the image, regular checks and monitoring of these variables are essential to achieve and maintain good quality radiographs. It is these checks which form the basis of quality assurance (QA) programmes (see later).

Dental care professionals need to be able to recognize the cause of the various film faults so that appropriate corrective action can be taken.

Examples of typical film faults are shown below and summarized later in Table 14.1.

Summary of common film quality problems and their possible causes 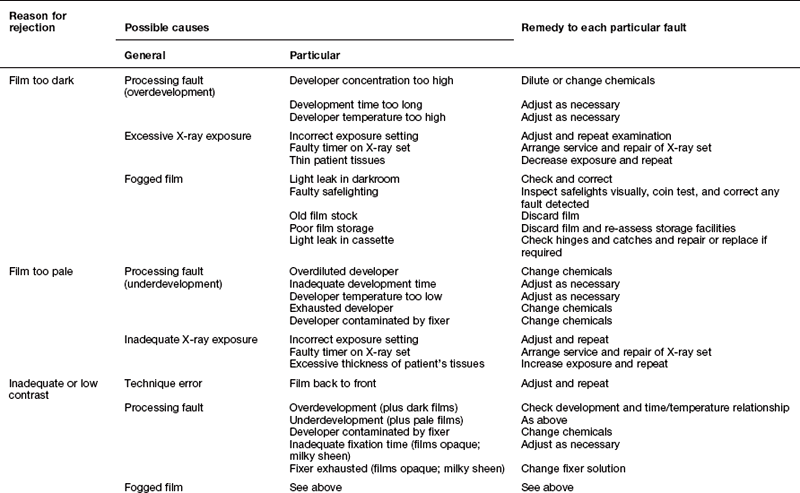 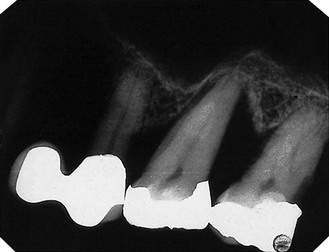 Fig. 14.1 Example of a periapical that is too dark with poor contrast. 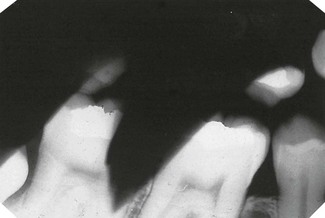 Fig. 14.2 Example of a fogged (blackened) film. Bitewing fogged in the darkroom by inadvertently exposing the upper part of the film to light. The lower part was protected by the operator’s fingers.

– Excessive time in the developer solution

– Failure to keep timer switch depressed throughout the exposure

– Inadequate time in the developer solution 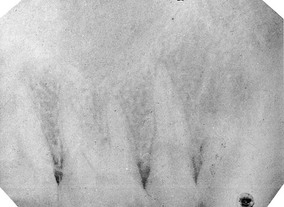 Fig. 14.3 Example of a periapical that is too pale with poor contrast.

Film with inadequate or low contrast

Fig. 14.4 Examples of unsharp and blurred films. A As a result of patient movement. B As a result of excessive bending of the film packet during the exposure.

• Excessive bending of the film packet during the exposure (see also Ch. 7)

• Overexposure – causing burn-out of the edges of a thin object 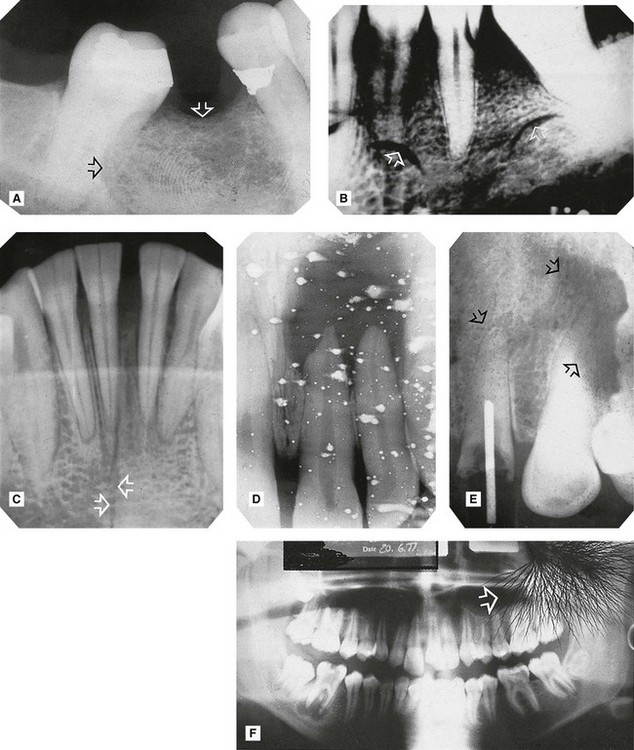 • Film packet bent by the operator

• Careless handling of the film in the darkroom resulting in marks caused by:

• Patient biting too hard on the film packet

These errors can happen whatever image receptor is being used and were described in detail and illustrated in Chapters 7, 8 and 12. They are summarized below and can be divided into intraoral and panoramic technique errors.

• Failure to align the X-ray tubehead correctly in the horizontal plane causing:

– coning off or cone cutting

• Failure to align the X-ray tubehead correctly in the vertical plane causing:

– coning off or cone cutting

• Careless inadvertent use of the image receptor twice.

Tags: Radiography and Radiology for Dental Care Professionals 3e
Jan 12, 2015 | Posted by mrzezo in Oral and Maxillofacial Radiology | Comments Off on 14: The quality of radiographic images and quality assurance
Premium Wordpress Themes by UFO Themes
WordPress theme by UFO themes