Conventional tomography is a specialized radiographic technique developed originally for producing radiographs that showed only a section or slice of a patient. A useful analogy is to regard the technique as one that enables the patient to be imaged in slices – like a loaf of sliced bread (see Fig. 12.1). Each individual tomographic image (or slice) shows the tissues within that section sharply defined and in focus. The section is thus referred to as the focal plane or focal trough. Tissues and structures outside the tomographic section are not visible because they are very blurred and out of focus. 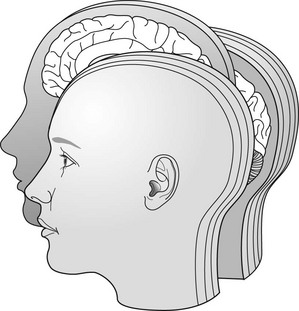 Fig. 12.1 Diagram illustrating the analogy of tomography – the patient is imaged and can be viewed in slices like a loaf of sliced bread.

Production of each conventional tomographic slice required controlled, accurate movement of both the X-ray tubehead and the film during the exposure, thereby making it different from all the routine radiographic techniques described in previous chapters. As will be described later in this chapter, by varying the size of the X-ray beam and the type of equipment movement employed it proved possible to change the shape of the tomographic layer from a straight (linear) line (see Fig. 12.2) to a curve, and ultimately to the approximate horseshoe shape of the dental arch, providing an overall panoramic image of all the teeth and their supporting structures – the so-called dental panoramic tomograph (DPT) or panoramic radiograph (see Fig. 12.3). 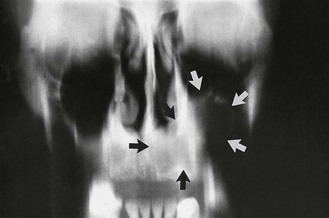 Fig. 12.2 A linear tomograph in the coronal plane. The slice passes through and contains part of the antra and facial skeleton and shows an antral tumour (arrowed). 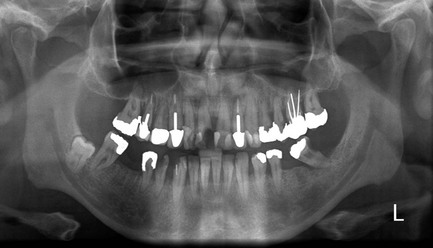 Fig. 12.3 A dental panoramic radiograph depicting a curved tomographic slice. The curved, horseshoe-shaped slice is approximately the shape of the dental arch and contains the teeth and their supporting structures. In both examples the tissues imaged in the tomographic slices are sharply defined and in focus, while the unwanted structures are blurred out.

The theory of panoramic tomography is complicated. Nevertheless, an understanding of how the resultant radiographic image is produced and which structures are in fact being imaged, is necessary for a critical evaluation and the interpretation of this type of radiograph.

As stated, tomography requires controlled, accurate movement of both the X-ray tubehead and the film. They are therefore linked together. During the exposure, the X-ray tubehead moves in one direction while the film moves in the opposite direction, as shown in Fig. 12.4. The point at the centre of this rotating movement will appear in focus on the resultant radiograph, since its shadow will appear in the same place on the film throughout the exposure. All other points will appear blurred or out of focus.

Fig. 12.4 Diagram illustrating the principle of tomographic movement. The X-ray tubehead moves in one direction while the film moves in the opposite direction. Points A, B, C, D, E and F will all appear on different parts of the film and thus will be blurred out, while point O, the centre of rotation, will appear in the same place on the film throughout the exposure and will therefore be sharply defined.

The principle of tomography illustrated in Fig. 12.4 shows a very thin X-ray beam producing one point (O) – the centre of rotation – in focus on the film. To produce a section or slice of the patient in focus, a broad X-ray beam is used. For each part of the beam, there is a separate centre of rotation, all of which lie in the same focal plane. The resultant tomography will therefore show all these points sharply defined. The principle of broad-beam tomography is illustrated in Fig. 12.5. 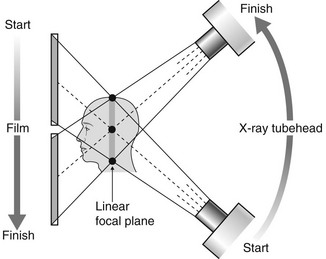 Fig. 12.5 Diagram showing the principle of broad-beam tomography. Using a broad beam there will be multiple centres of rotation (three are indicated: •) all of which will lie in the shaded zone. As all the centres of rotation will be in focus, this zone represents the focal plane or section of the patient that will appear sharply defined on the resultant tomograph.

• The X-ray beam has to be collimated from a broad beam to a narrow beam.

• The film cassette has to be placed behind a protective metal shield. A narrow opening in this shield is required to allow a small part of the film to be exposed to the X-ray beam at any one instant.

• A cassette carrier, incorporating the metal shield, has to be linked to the X-ray tubehead to ensure that they move in the opposite direction to one another during the exposure. This produces the synchronized tomographic movement in the vertical plane.

• Within this carrier, the film cassette itself has to be moved in the same direction as the tubehead. This ensures that a different part of the film is exposed to the X-ray beam throughout the exposure.

The principle of narrow-beam linear tomography using this equipment is illustrated in Fig. 12.6. 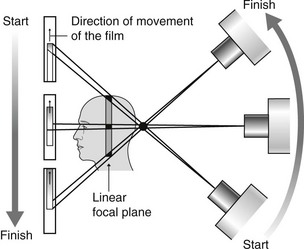 Fig. 12.6 Diagram showing the theory of narrow-beam linear tomography to produce a vertical coronal section. The tomographic movement is produced by the synchronized movement of the X-ray tubehead and the cassette carrier, in the vertical plane. The film, placed behind the metal protective front of the cassette carrier, also moves during the exposure, in the same direction as the X-ray tubehead. The narrow X-ray beam traverses the patient and film, exposing a different part of the film throughout the cycle.

In this type of tomography, narrow-beam equipment is again used, but the synchronized movement of the X-ray tubehead and the cassette carrier are designed to rotate in the horizontal plane, in a circular path around the head, with a single centre of rotation. The resultant focal trough is curved and forms the arc of a circle, as shown in Fig. 12.7. 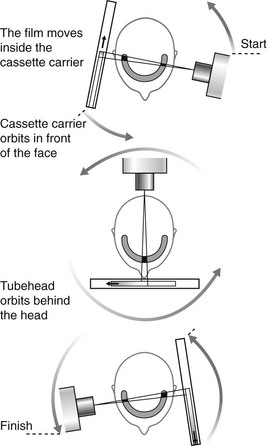 Fig. 12.7 Diagrams showing the theory of narrow beam rotational tomography. The tomographic movement is provided by the circular synchronized movement of the X-ray tubehead in one direction and the cassette carrier in the opposite direction, in the horizontal plane. The equipment has a single centre of rotation. The film also moves inside the cassette carrier so that a different part of the film is exposed to the narrow beam during the cycle, thus by the end the entire film has been exposed. The focal plane or trough (shaded) is curved and forms the arc of a circle.

• The X-ray tubehead and the cassette carrier appear to move in opposite directions to one another.

• The film moves in the same direction as the X-ray tubehead, behind the protective metal shield of the cassette carrier.

• A different part of the film is exposed to the X-ray beam at any one instant, as the equipment orbits the head.

• As in conventional tomography, shadows of structures not within the focal trough will be out of focus and blurred owing to the tomographic movement.

The dental arch, though curved, is not the shape of an arc of a circle. To produce the required elliptical, horseshoe-shaped focal trough, panoramic tomographic equipment employs the principle of narrow-beam rotational tomography, but uses two or more centres of rotation.

There are several dental panoramic units available; they all work on the same principle but differ in how the rotational movement is modified to image the elliptical dental arch. Four main methods (see Fig. 12.8) have been used including: 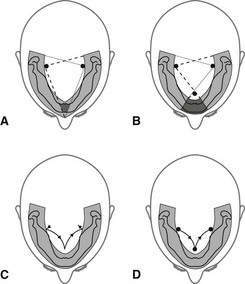 Fig. 12.8 Diagrams showing the main methods that have been used to produce a focal trough that approximates to the elliptical shape of the dental arch using different centres of rotation. A 2 stationary, B 3 stationary, C continually moving, D combination of 3 stationary and moving centre.

• A combination of three stationary centres of rotation and a moving centre of rotation.

However, the focal troughs are produced, it should be remembered that they are three-dimensional. The focal trough is thus sometimes described as a focal corridor. All structures within the corridor, including the mandibular and maxillary teeth, will be in focus on the final radiograph. The vertical height of the corridor is determined by the shape and height of the X-ray beam and the size of the film, as shown in Fig. 12.9. 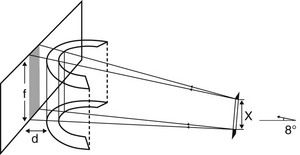 As in other forms of narrow-beam tomography, a different part of the focal trough is imaged throughout the exposure. The final radiograph is thus built up of sections (see Fig. 12.10), each created separately, as the equipment orbits around the patient’s head.

Fig. 12.10 Diagram showing the gradual build-up of a panoramic tomograph over an 18-second cycle, illustrating how a different part of the patient is imaged at different stages in the cycle.

Unfortunately, although the final radiograph shows all the teeth and their supporting structures, the tomographic image quality is generally inferior to that obtained using intraoral radiographic techniques and interpretation is more complicated.

In the UK, the 2013 Selection Criteria for Dental Radiography booklet suggests panoramic radiography in general practice in the following circumstances:

• In the case of a grossly neglected mouth

• For the assessment of wisdom teeth prior to planned surgical intervention. Routine radiography of unerupted third molars is not recommended

• As part of an orthodontic assessment where there is a clinical need to know the state of the dentition and the presence/absence of teeth. The use of clinical criteria to select patients rather than routine screening of patients is essential.

In addition, in dental hospitals panoramic radiographs are also used to assess:

• Fractures of all parts of the mandible except the anterior region

• Antral disease – particularly to the floor, posterior and medial walls of the antra

• Destructive diseases of the articular surfaces of the TMJ

The 2013 Selection Criteria specifically states that ‘panoramic radiographs should only be taken in the presence of specific clinical signs and symptoms’, and goes on to say that ‘there is no justification for review panoramic radiography at arbitrary intervals’.

Although varying in design and appearance, all panoramic units consist of four main components:

• An image receptor (film or digital), with or without an associated carriage assembly.

Traditional panoramic equipment was designed to use indirect-action radiographic film in an extraoral cassette as the image receptor. With the advent of digital imaging several variations in image receptor now exist, including: