Local anaesthetics are the mainstay of pain control in dental practice. They are used both topically and by injection. When given by injection they are often combined with a vasoconstrictor such as adrenaline or felypressin.

The properties of the ideal local anaesthetic are listed in Table 14.1. Unfortunately the first property of being specific for peripheral sensory nerves is not achieved by the drugs in current use. The fact that these drugs can affect any excitable membrane such as central nervous and cardiac tissue leads to unwanted effects (see below).

Local anaesthetics have a similar basic structure consisting of three parts. These are a lipophilic terminal, an intermediate chain and a substituted amino (hydrophilic) terminus (Fig. 14.1). The importance of having both lipophilic and hydrophilic components is discussed below. The intermediate chain determines the classification of local anaesthetics. The two types are esters and amides. These differ in two important respects. First, they vary in the way they are metabolised. Secondly, esters are more likely to produce allergic reactions compared with amides. Table 14.2 shows the classification of common local anaesthetics.

Transmission of impulses along nerves depends upon nerve cell depolarisation. Local anaesthetics act by interfering with this depolarisation. This is accomplished by the local anaesthetic blocking entry of sodium into the cell. This is achieved by binding to specific receptors in the sodium channel. Once bound, the local anaesthetic maintains the channel in a configuration that prevents the entry of sodium. This arrangement is similar to that which occurs during the refractory period, when the nerve will not transmit. Figures 14.2 and 14.3 show the different formations that the sodium channel can adopt depending upon its phase of activity.

An important point is that the local anaesthetic gains access to its binding site from within the nerve cell. This means that the local anaesthetic molecule has to enter the cell to be effective. To do this, the molecule must be lipid soluble. On the other hand, as the ultimate action of a local anaesthetic involves specific binding, the molecule must also have the ability to exist in a charged form. The properties of being lipid soluble and having a charged part to enable binding are possible in local anaesthetic molecules as they are weak bases. In solution they exist in both charged and uncharged modes. The proportion of charged to uncharged is governed by the pH (of the solution and site of deposition) and the pKa of the molecule. Agents with a low pKa have a larger portion of uncharged molecules at a given pH and thus a greater proportion can enter the nerve cell. Thus a number of physicochemical properties govern the action of local anaesthetics, and these are described below.

The following affect the action of local anaesthetics:

Table 14.3 pKa of some local anaesthetics 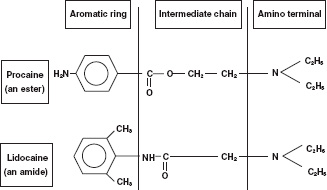 Figure 14.2 The sodium channel comprises three subunits known as α, β 1 and β 2. The figure shows the α-subunit, which contains the pore through which sodium enters the cell, in the resting configuration. The unit is made up of four domains (I–IV), each of which contains six protein helical segments (S1–6) that traverse the length of the channel. At rest the positively charged S4 segments extend into the pore, obstructing sodium entry. When the nerve cell fires, the S4 segments retract into the wall of the pore allowing sodium entry. 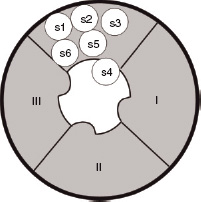 Figure 14.3 The sodium channel in the refractory configuration. A protein loop between domains III and IV extends into the channel, inhibiting entry of sodium. The local anaesthetic molecule (la) binds on or close to this loop, maintaining this configuration. 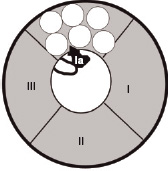 As mentioned above, pH and pKa govern the proportion of charged and uncharged fractions of the agent. More uncharged molecules are available when the pH is high and the pKa low. The pKa of different local anaesthetic agents is given in Table 14.3.

The partition coefficient determines the relative solubility of a material in lipid and water; the higher the coefficient, the more fat soluble. Local anaesthetics with high coefficients will enter the cell more rapidly and have a quicker onset.

Protein binding determines the duration of action of a local anaesthetic. Greater protein binding provides longer lasting anaesthesia as the molecule binds to its receptor for longer. In addition, the bound fraction acts as a reservoir for material absorbed from the site of deposition. Bupivacaine is 96% bound to protein compared with 64% for lidocaine, thus the former is a longer acting agent. Most local anaesthetics are vasodilators, but the degree varies between drugs. The more vasodilatation the more readily the drug is absorbed from its site of deposition and therefore has a shorter duration of action. Mepivacaine is less of a vasodilator than lidocaine so lasts longer when used as a plain (i.e. vasoconstrictor-free) solution.

The metabolism of local anaesthetics differs between esters and amides. Esters are rapidly broken down in plasma by pseudocholinesterases. The metabolism of amides is more complex. Most amides are broken down in the liver in multiple stages. Exceptions to this rule are prilocaine and articaine. In addition to hepatic metabolism, prilocaine undergoes some breakdown in the lungs. Articaine, despite being an amide, is initially metabolised in the plasma by pseudocholinesterase. This early/>