• Technical Aspects of Executing the Mandible-First Approach During Orthognathic Surgery

Unlike most surgical procedures, orthognathic surgery involves not just thorough medical assessment but also precise preoperative dental, radiographic, and facial aesthetic planning. The surgeon also carries out a detailed face-to-face examination of the patient to determine variations from normal.

Immediate presurgical records include current dental impressions of the maxillary and mandibular arches; accurate bite registration in centric relation (CR); a face-bow registration; and the recording of specific facial measurements, including deviations from normal. The dental models are placed on a semi-adjustable articulator for further analysis, and they are then used to complete analytic model planning.1,2,10,13,15,39,40 Acrylic splints are fabricated and used intraoperatively to further ensure the reliable execution of the predetermined reorientation of the maxilla and mandible to achieve facial aesthetic and functional objectives.

Although the making of clinical decisions about the preferred aesthetic repositioning of the jaws remains both an art and a science (see Chapter 12), the technical aspects of model planning should be precise and consistent. Analytic model planning and the use of prefabricated splints continue to represent the standard of care for bimaxillary and segmental maxillary osteotomies.6,14,17,52

Despite the benefits of this time-honored model planning approach, there is the potential for the introduction of error. For example, if an inaccurate CR bite registration is obtained from the patient preoperatively. The surgeon’s ability to obtain an accurate and reproducible bite registration in CR during the immediate presurgical clinical examination, during the occlusion of the dental models on the articulator in the laboratory, and when using the splints in the operating room is essential to avoid errors when standard analytic model planning is employed.5,12,13,17–28,32,33,35,36,53

There are specific clinical settings in which the obtaining of an accurate and reliable CR can be problematic.8,11,34,37,39,52 Examples include the following individuals: 1) those who are missing a condyle after tumor resection 2) those with severe atrophy of the condyle after trauma and 3) those with specific syndromes in which the condyle-ascending ramus is aplastic (e.g., Treacher Collins syndrome, or hemifacial microsomia with Kaban type IIB or III malformation; see Chapters 27 and 28) (Fig. 14-1) For those patients with an unreliable CR, a “mandible-first” approach to analytic model planning is required. 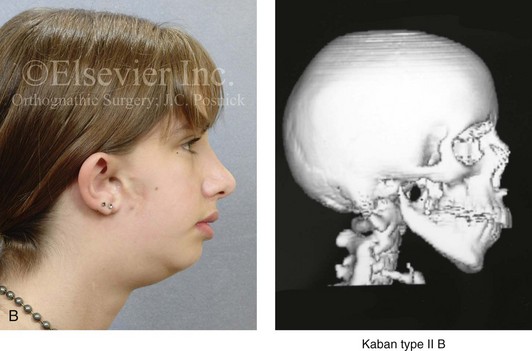 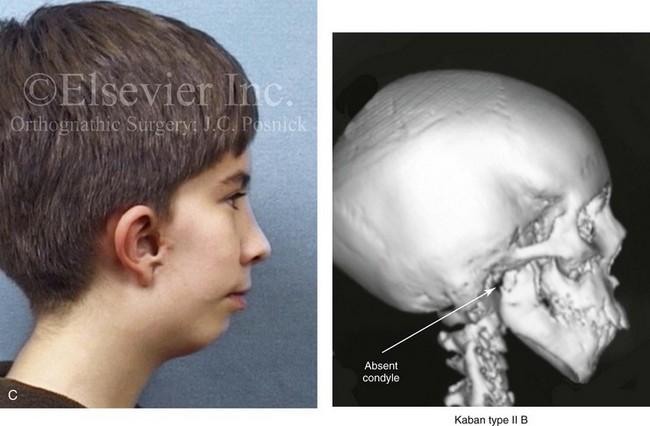 The definition of CR remains somewhat controversial, and it is frequently misstated.46-49 In 1987, the definition of CR underwent a change in terminology from being considered a mandibular position in which the condyles are seated in the most “posterior superior” position to one in which the condyles are placed in the most “superior anterior” position in the glenoid fossa.45,46 For analytic model planning in preparation for orthognathic surgery, defining the exact position of each condylar head during mandibular protrusion and lateral excursions is not critical. However, it is essential to locate a mandibular position that is reproducible with the teeth in occlusion. This must be obtained without the assistance of the patient (i.e., with fully relaxed masticatory muscles), and it needs to be reliably accomplished both preoperatively and intraoperatively. This position must also be transferable to the articulator in the laboratory for model planning to be accomplished accurately. An erroneous and inconsistent recording of CR will lead to the malpositioning of the maxilla or mandible during surgery.

A survey study conducted by Truitt and colleagues confirmed that 98% of oral and maxillofacial surgeons define CR as the most posterior superior seating of the condyle in the fossa.51 Interestingly, a majority of the orthodontists surveyed agree with the surgeons’ definition of CR, but there was less consistency.22,41 According to the survey, surgeons and orthodontists do agree that, in preparation for orthognathic surgery, analytic model planning requires that casts of the teeth be mounted in CR on a semi-adjustable articulator.

Hellsing and McWilliam used a subtraction technique to assess the repeatability of CR that is recorded with a one-handed push-back technique.21 They found that, with the use of this technique, the mandibular condyles can be seated in a reproducible position and thus be well suited for the registration of CR. Campos and colleagues compared the swallowing technique with the chin-point guidance technique when the patient was in both upright and supine body positions.3,5,9,15,21 Both techniques were found to establish physiologic CR in a reproducible manner. Interestingly, when the chin-point guidance method was used, the work of these authors suggested that reliability was greater with the patient in the upright, seated position as compared with the supine position.

Simon and Nicholls compared the chin-point guidance, chin-point guidance with ramus support, and bimanual manipulation techniques.43 They found that there were no significant differences in the range of mandibular positions that were observed. Interestingly, their study patients did not include individuals with jaw deformities. It is known that patients with specific patterns of jaw deformity (e.g., Class II retrognathism) are more likely to involuntarily posture the mandible forward during the swallowing technique.

When a reliable CR can be obtained, we find the chin-point guidance technique—when used both preoperatively and intraoperatively by the same clinician—to be both reliable and convenient for the orthognathic surgery patient. This is the method that has been adopted by this author, and it has been used successfully for orthognathic patients that have a reliable CR. By using one hand to apply pressure to the subject’s chin and the other hand to apply opposing pressure to the occiput, the clinician is able to apply posterior and superior “vectored” force to the anterior mandible. This will seat the condyles in a superior-anterior location within each glenoid fossa (i.e., CR).

Alternative methods to the standard analytic model planning approach to bimaxillary orthognathic surgery have been described in an attempt to improve the accuracy and predictability of outcomes.8,11,34,37,50,52 Recently, surgeons have also begun looking to computer-aided design and computer-aided modeling software to assist with the planning and implementation of orthognathic procedures (see Chapter 13).3,4,7,14,16,18,19,20,29,30,31,38,42,44,54,55,56

A mandible-first approach to analytic model planning is also indicated in unique clinical circumstances in which significant posterior maxillary lengthening is planned to the extent that the clockwise rotation of the mandible will require the translational movement of the condyles in the glenoid fossa during the use of the intermediate splint (Fig. 14-4). Fortunately, these cases are not common; very few patients require the actual lengthening of the posterior maxillary height. Furthermore, those who do generally either require the closure of baseline posterior open bites (i.e., cases that involve the failure of the posterior dentition to erupt) or are undergoing simultanous advancement. For example, the advantage of the counterclockwise rotation of the maxillary and mandibular planes (i.e., pitch orientation) is frequently seen in the clinical setting of a long face growth pattern. This counter clockwise rotation is generally accomplished via the differential intrusion of the maxilla (i.e., anterior more so than posterior). This does not require the lengthening of the posterior maxillary height or the overall posterior facial height (see Chapter 21).

We prefer to use the mandible-first analytic model planning technique, in only specific clinical situations (see Fig. 14-1 through 14-4).8,11,34,37,39,52 However, whichever method of model planning is used, all orthognathic patients require a thorough clinical history and physical examination. A maxillofacial and focused dental assessment is also completed with particular emphasis on the accurate documentation of the following: 1) any maxillary occlusal cant (i.e., role orientation) 2) the maxillary and mandibular dental midline positions relative to the facial midline (i.e., yaw orientation) 3) any disproportions in vertical facial height 4) any disproportions in the horizontal projection of each jaw and 5) any advantage to the alteration of the maxillary or mandibular planes (i.e., pitch orientation); (see Chapter 12).

The basic technical aspects of mandible-first analytic model planning include the following: