The denture base is that part of the denture which rests on the soft tissues and so does not include the artificial teeth. Prior to 1940 vulcanite was the most widely used denture base polymer. This is a highly cross-linked natural rubber which was difficult to pigment and tended to become unhygienic due to the uptake of saliva. Nowadays acrylic resin is used almost universally for denture base construction (Fig. 13.1).

The acrylic denture base is normally fabricated in a two-part gypsum mould. The mould is produced by investing wax trial dentures on which the artificial teeth have been mounted. After ‘boiling out’ of the wax the gypsum mould is treated with an alginate mould-sealing agent. This is a viscous solution of sodium alginate which is rapidly converted to calcium alginate on contact with the gypsum. It forms a thin ‘skin’ over the surface of the mould, preventing monomer in the acrylic ‘dough’ from entering the gypsum. The space remaining after removal of wax is filled with acrylic dough which may be heat cured or allowed to cure at room temperature depending on the material being used. During curing the acrylic resin denture base becomes attached to the artificial teeth. The formation of the denture base by this technique is known as the dough moulding method. Acrylic denture bases may also be produced by injection moulding or by using a pourable resin technique, although the latter methods are not commonly used.

13.2 Requirements of denture base polymers

The requirements of a denture base material can be conveniently listed under the headings of physical, mechanical, chemical, biological and miscellaneous properties.

Physical properties: An ideal denture base material should be capable of matching the appearance of the natural oral soft tissues. The importance of this requirement varies considerably, depending on whether the base will be visible when the patient opens his mouth.

A polymer which is used to construct a denture base should have a value of glass transition temperature (Tg) which is high enough to prevent softening and distortion during use. Although the normal temperature in the mouth varies only from 32°C to 37°C, account must be taken of the fact that patients take hot drinks at temperatures up to 70°C and, despite advice, sometimes clean dentures in very hot or even boiling water.

The base should have good dimensional stability in order that the shape of the denture does not change over a period of time. In addition to distortions which may occur due to thermal softening, other mechanisms such as relief of internal stresses, continued polymerisation and water absorption may contribute to dimensional instability.

The material should, ideally, have a low value of specific gravity in order that dentures should be as ‘light’ as possible. This reduces the gravitational displacing forces which may act on an upper denture.

A high value of thermal conductivity would enable the denture wearer to maintain a healthy oral mucosa and to retain a normal reaction to hot and cold stimuli. If the base is a thermal insulator it is possible that the patient may take a drink which he would normally detect as being ‘too hot to bear’, and undergo a painful experience as the drink reaches the throat and gut.

The denture base should, ideally, be radiopaque. It should be capable of detection using normal diagnostic radiographic techniques. Patients occasionally swallow dentures and may even inhale fragments of dentures if involved in a violent accident, such as a car crash. Early radiological detection of the denture or fragment of denture is of immense help in deciding the best course of treatment.

Fig. 13.1 Acrylic denture. This shows the appearance of a typical acrylic denture. It consists of the pink area which is constructed in a dental laboratory using powder liquid mixtures of acrylic denture base materials (see Fig. 13.2). The teeth are manufactured to standard shapes and sizes under controlled factory conditions. 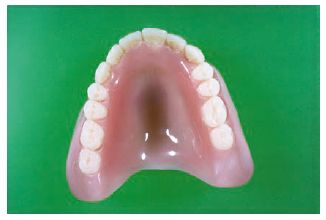 Fig. 13.2 Denture base acrylic. This shows a typical acrylic denture base material which is provided in the form of a powder (normally containing a pigment which is pink) and a liquid which is contained within a light-proof dark brown bottle. During use the powder and liquid are mixed together to form a dough, which can be moulded inside a mould produced from a cast of the patient’s mouth. 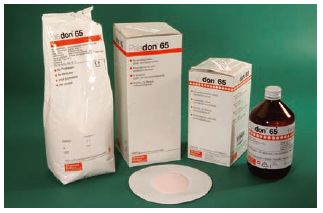 Fractures of upper dentures invariably occur through the midline of the denture, due to flexing (Fig. 13.3). The denture base should have sufficient flexural strength to resist fracture. The method of measuring flexural strength or transverse strength is described in Section 2.2.

Fig. 13.3 Diagram illustrating how an upper denture may flex about the midpoint of the palate. This fatigue process may eventually cause fracture. 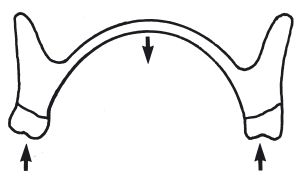 Fracture of the denture base in situ often occurs by a fatigue mechanism in which relatively small flexural stresses, over a period of time, eventually lead to the formation of a small crack which propagates through the denture, resulting in fracture. The base material should therefore have an adequate fatigue life and a high value of fatigue limit.

When patients remove dentures for cleaning or overnight soaking, there is a danger of fracture if the denture is accidentally dropped onto a hard surface. The ability of a denture base to resist such fracture is a function of the impact strength of the material. Impact fracture of the denture may occur in situ if the patient is involved in a violent accident involving the facial region, for example, of the head hits a windscreen during a motor accident. The fragments of denture may then become embedded into soft tissue or may be inhaled.

Denture base materials should have sufficient abrasion resistance to prevent excessive wear of material by abrasive denture cleansers or foodstuffs. Wear is a complex phenomenon which may depend on many material properties. For abrasive wear it is thought that surface hardness of the substrate is of primary importance.

Chemical properties: A denture base material should be chemically inert. It should, naturally, be insoluble in oral fluids and should not absorb water or saliva since this may alter the mechanical properties of the material and cause the denture to become unhygienic.

Biological properties: In the unmixed or uncured states the denture base material should not be harmful to the technician involved in its handling. The ‘set’ denture base material should be nontoxic and non-irritant to the patient. In the previous section it was mentioned that the base should, ideally, be impermeable to oral fluids and this would certainly be an ideal property. If a degree of absorption occurs however, the base should not be able to sustain the growth of bacteria or fungi.

Composition of type I and type 2 materials

Most materials are supplied as a powder and liquid, details of the composition of which are given in Table 13.2. The major component of the powder is beads of polymethylmethacrylate with diameters up to 100 μm. (Fig. 13.4). These are produced by a process of suspension polymerisation in which methylmethacrylate monomer, containing initiator, is suspended as droplets in water. Starch or carboxymethylcellulose can be used as thickeners and suspension stabilizers, but have the disadvantage of potentially contaminating the polymer beads. The temperature is raised in order to decompose the peroxide and bring about polymerisation of the methylmethacrylate to form beads of polymethylmethacrylate which, after drying, form a free-flowing powder at room temperature.

The initiator present in the powder may consist of peroxide remaining unreacted after the production of the beads, in addition to extra peroxide added to the beads after their manufacture.

Polymethylmethacrylate is a clear, glass-like polymer and is occasionally used in this form for denture base construction. It is more normal, however, for manufacturers to incorporate pigments and opacifiers in order to produce a more ‘lifelike’ denture base. Sometimes, small fibres coated with pigment are used to give a veined appearance. Pink pigments used in denture base resins are traditionally salts of cadmium. These pigments have good colour stability and have been shown to leach cadmium from the denture base in only minute amounts. Fears over the toxicity of cadmium compounds, however, have led to the gradual replacement of cadmium salts with other ‘safer’ substances.

Table 13.1 Classification of denture base polymers according to ISO 1567.

* Only in self-curing materials. 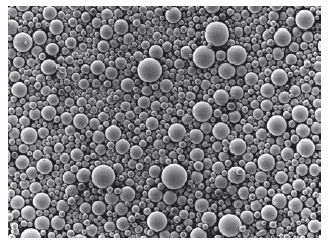 The major component of the liquid is methylmethacrylate (MMA) monomer. This is a clear, colourless, low-viscosity liquid with a boiling point of 100.3°C and a distinct odour exaggerated by a relatively high vapour pressure at room temperature. MMA is one of a group of monomers which are very susceptible to free radical addition polymerisation (see Fig. 12.3). Following mixing of the powder and liquid components and activation by either heat or chemical means, the curing of the denture base material is due to the polymerisation of MMA monomer to form polymethylmethacrylate.

The liquid normally contains some cross-linking agent. The substance most widely used is ethyleneglycoldimethacrylate, the structural formula of which is given in Fig. 12.7. This compound is used to improve the physical properties of the set material.

The inhibitor, which is commonly a derivative of hydroquinone, works by reacting rapidly with radicals formed within the liquid to form stabilized radicals which are not capable of initiating polymerisation. This is illustrated in Fig. 13.5 in which the product radical (z) is a relatively stable species which will not initiate polymerisation of MMA at room temperature. The stability of the radical (z) is explained by the fact that the unpaired electron is not isolated in the oxygen atom but may occupy several sites around the ring, as shown in Fig. 13.6.

One way of reducing the occurrence of unwanted radicals in the liquid is to store the material in a can or in a dark-brown bottle. Visible light or ultra-violet radiation may activate compounds which are potentially capable of forming radicals. Eliminating the source of radiation is therefore beneficial.

The activator is present only in those products which are described as self-curing or autopolymerizing materials and not in heat curing denture base materials. The function of the activator is to react with the peroxide in the powder to create free radicals which can initiate polymerisation of the monomer.

Fig. 13.6 The stability of the radical (z) formed in Fig. 13.5 is explained by the way in which the unpaired electron can occupy several sites in the molecule.

Mixing: The manipulation of acrylic denture base materials involves the mixing of powder and liquid to form a ‘dough’ which is packed into a gypsum mould for curing. The ratio of powder to liquid is important since it controls the ‘work-ability’ of the mix as well as the dimensional change on setting. MMA monomer undergoes a volumetric polymerisation shrinkage of 21% on conversion to polymer. This shrinkage is considerably reduced by using a mix with a high powder/liquid ratio. If the powder/liquid ratio is too high however, the mix becomes ‘dry’ and unmanageable and the mixture will not flow when placed under pressure in the gypsum mould. In addition, there is insufficient monomer in a dry mix to bind all the polymer beads together. This may produce a granular effect on the denture surface which is normally referred to as granular porosity.

In order to produce a workable mix, whilst maintaining shrinkage at a low level, a powder/liquid ratio of 2.5 : 1 by weight is normally used. This gives a volumetric polymerisation shrinkage of around 5–6%.

Proportioning is normally carried out by placing a suitable volume of liquid into a clean, dry mixing vessel followed by slow addition of powder, allowing each powder particle to become wette/>