Invisalign System is a relatively novel system of moving teeth, but its components are not all necessarily new. The clinician already knows how to make impressions and how to fabricate a suck-down thermoplastic cover over the teeth. It is also known that if the thermoformed plastic does not fit the model or teeth passively, teeth will move enough to accommodate the fit of the plastic. In fact, many orthodontists, when faced with minor relapse of alignment, will advise their patients to seat and press down the old suck-down retainer to realign the teeth. And it works.

The reason we refer to this entire process as a “system” is because the Invisalign System is more than an appliance: it’s a mindset. The clinician must treat the patient virtually using the computer images long before touching even a single tooth. This process of predicting what should happen and when requires significant clinical experience.

The best cases for the beginner or occasional user of Invisalign are those with spacing problems devoid of any skeletal disparities. The result is consistently predictable and the process is comfortable. Treatment shown in < ?xml:namespace prefix = "mbp" />Fig. 12-1 supports this statement. 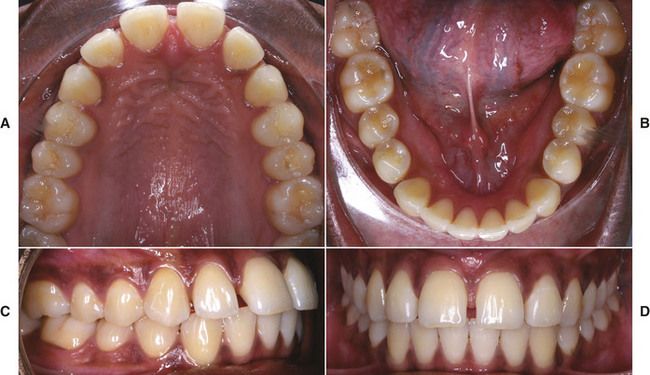 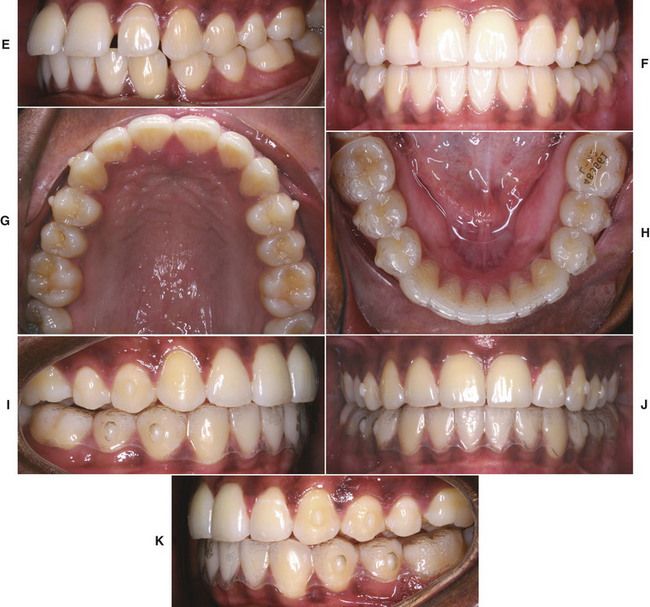 FIG 12-1 A-E, This patient exhibits a good posterior occlusion and generalized spacing in the anterior region. These images depict a perfect indication for Invisalign treatment; treatment time will be short and uneventful. F, Note the improperly placed gingival margin. The overextended tray can strip the gingival tissue away. This is usually due to imperfect registration of the gingival margin in the PVS impression. Another possible error is on the technician’s part where the virtual gingival tissue was constructed thinner than it is in real life. During the course of treatment, the clinician or the patient may trim the overextended parts with the aid of common nail trimmers. G-K, As can be noted in the images, spaces have closed and the gingival response is very good and devoid of any overgrowth.

The Invisalign System consists of mindset, software, impressions (instead of bracket placement), working with the computer, understanding physical properties and behavior characteristics of the plastic and ensuing force systems acting on teeth, as well as patient management. Just as any other appliance system, Invisalign has many remarkable strengths and many weaknesses. The clinician should know these and plan a treatment strategy accordingly; this strategy includes “treatment objectives.”

Clearly, Rome was not built overnight, nor was the edgewise appliance developed overnight, and neither will Invisalign reach its level of perfection overnight. Thus, comparisons of performance to other appliances would be inappropriate. Invisalign is generally used in the adult patient where attrition of the teeth is significant, mutilation is common, and patient desires are not occlusion specific. None of these elements is conducive to assess the outcome of treatment by quantitative means. Instead, the Invisalign-treated case can be judged only qualitatively.

Prior to introduction of the Invisalign System, the most widely used appliance was an adjunct to fixed appliances, which was worn once the bands and brackets were removed. The Positioner introduced by Kesling (1945) was originally made out of vulcanite material and aided the settling-in process; but it was also useful in correcting certain tooth positions that could not be finished for one reason or another by fixed appliances.1 Later, latex became the standard material to manufacture. But even earlier, Remmensnyder had introduced the Flex-O-Tite gum-massaging appliance in 1926 to aid in the treatment of gingival disease.2 He reported that he was observing tooth movements as a side effect. The first thermoformed plastic sheet to move teeth was invented by Nahoum in 1964.3 He called it the Dental Contour Appliance. Subsequently it was modified by Sheridan (1993) and called the Essix appliance.4 Invisalign (1997) takes the principles behind these appliances and manufactures series of Invisalign aligners to move teeth using the CAD/CAM technology.

2 How are Polyvinyl Siloxane (PVS) impressions converted to digital images and subsequently to aligners?

In the manufacture of aligners, a number of imaging technologies have been used. Initially, a laser scanner manufactured by Cyberware was tested, but the undercuts were hard to capture. To improve the speed of image capture, the earlier Invisalign-branded aligners were created from images generated by the destructive scanning process. In this process, layers of 2D images are stacked to form a 3D image. Unfortunately, this technique is lengthy, expensive, and messy. Structured light was a popular method to capture the image of a surface, but it too was not accurate enough; it did not provide enough detail of undercuts and interproximal gaps. Currently, CT scanning is used, avoiding the need for impressions to be poured.

From the images acquired, light-cured polymer molds are manufactured. This process is known as stereolithography (SLA). This series of molds created for each patient is used to thermoform the plastic sheet. Trimming of the plastic is done by robots, but the final smoothing is still done by hand. Prior to packaging and shipping, Invisalign aligners are disinfected in an ultrasonic bath of disinfectants.

3 What is the process and software involved in creating the Invisalign-branded aligners?

The CT images of PVS impressions are transferred to a special software called “Treat” software.5 It has a number of components that perform different functions. Initially, imperfections of the impression are smoothed out and then submitted to the ClinCheck technicians. Steps involved in the manufacturing pro/>