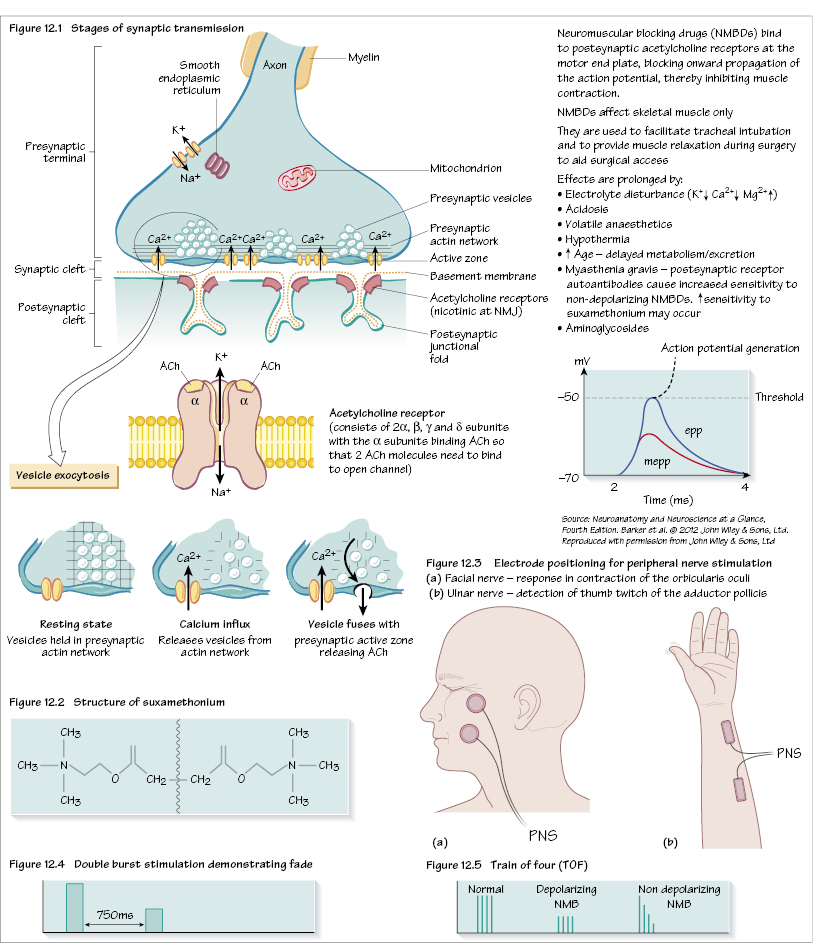 Acetylcholine (ACh) is the neurotransmitter at skeletal muscle synaptic junctions. It is synthesized from choline and acetyl coenzyme A by acetylcholinetransferase and stored in presynaptic vesicles. An action potential causes influx of calcium ions at the nerve terminal, the vesicles then move into the active zone and fuse with the axonal membrane. The active zones lie opposite the postsynaptic membrane ACh receptors. An action potential causes 200–300 vesicles to release their quanta of ACh into the space between the nerve terminal and the muscle membrane (the junctional cleft) (Figure 12.1).

The ACh binds to the two alpha subunits of the ACh receptor, causing its ionophore to briefly open and allowing ion flux (mainly Na+ influx followed by K+ efflux). Spread of the action potential causes mobilization of Ca2+ from the sarcoplasmic reticulum and subsequent muscle contraction.

ACh is metabolized by acetylcholinesterase, present in the junctional cleft (60 nm wide) and postsynaptic membrane junctional folds. The choline produced by ACh breakdown is taken up for reuse.

It has the fastest onset (60 s) and shortest duration (approximately 10 min) of all NMBDs. Its main use is in endotracheal intubation when rapid intubating conditions are required. Its effect is antagonized by non-depolarizing NMBDs and potentiated by anticholinesterase inhibitors. Dual block may occur if excessive or repeated doses are given, resulting in features of a non-depolarizing block replacing those of a depolarizing block.