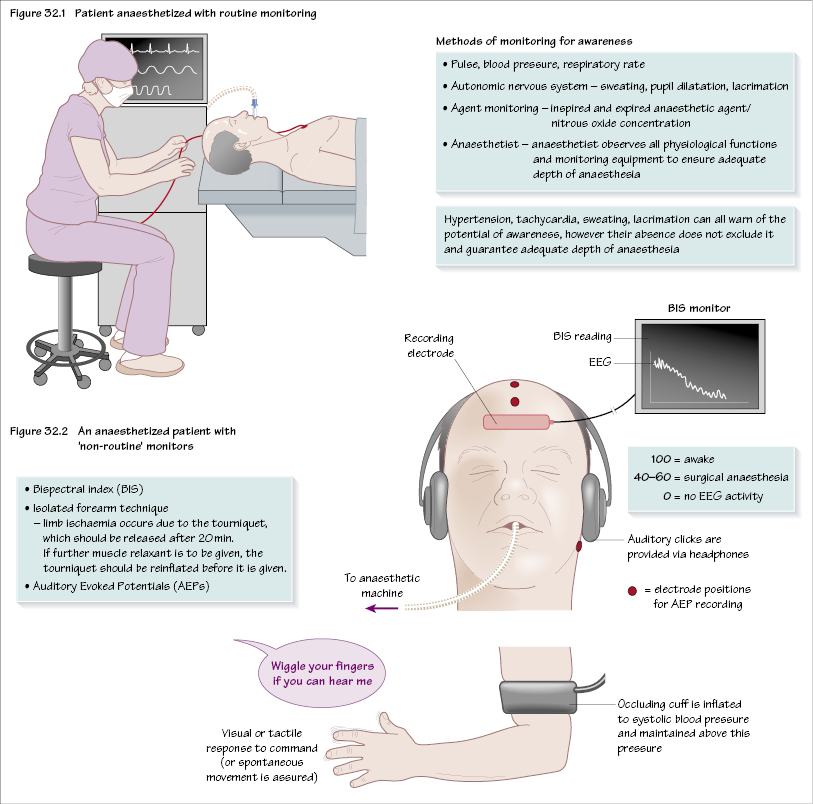 Awareness is an issue of major concern for both the anaesthetist and patient and is often brought up preoperatively as an area of anxiety by patients.

The most extreme form of awareness is the paralysed patient who experiences pain and is unable to alert anyone to their situation. This has been likened to torture, with a significant incidence of post-traumatic stress disorder. Thankfully this is very rare, in part due to:

There are different types of awareness:

The incidence of awareness has been reported to range between 0.2% and 1.6% in surgical patients. Of this group:

During life-saving emergency surgery, inadequate anaesthesia could potentially occur if the cardiovascular depressant effects of the anaesthetic impacted on the adequacy of coronary and cerebral perfusion pressure.

Anaesthesia is likely to affect the memory of awareness rather than the actual awareness itself.

Analysis of Medical Defence Union (UK) claims of awareness for a single year showed 70% of episodes were due to faulty technique and 20% were due to failure to check equipment. Only 2.5% of claims were due to equipment failure, unknown causes, spurious claims or justified risks (e.g. in critically ill patients).

Tags: Anaesthesia at a Glance
Jan 12, 2015 | Posted by mrzezo in Oral and Maxillofacial Surgery | Comments Off on 32: Awareness
Premium Wordpress Themes by UFO Themes
WordPress theme by UFO themes