The general principles of management of medical emergencies were discussed in Chapter 11. This chapter concentrates on specific medical emergencies. The practitioner dealing with specific emergencies must not lose sight of the need to act in accordance with basic principles and be prepared to revisit them if the patient response to treatment is not satisfactory.

Specific emergencies that may arise in dental practice are listed in Box 12.1. Their signs, symptoms and management will be discussed.

Box 12.1 A summary of medical emergencies that may be encountered in a dental emergency clinic

The ‘simple faint’ is the most common medical emergency to be seen in dental practice and results in loss of consciousness due to inadequate cerebral perfusion. It is a reflex that is mediated by autonomic nerves leading to widespread vasodilatation in the splanchnic and skeletal vessels and bradycardia resulting in diminished cerebral perfusion. Fainting can be precipitated by pain or emotional stress, changes in posture or hypoxia. Some patients are more prone to fainting than others and it is wise to treat fainting-prone patients in the supine position.

A similar clinical picture may be seen in ‘carotid sinus syndrome’. Mild pressure on the neck in such patients (usually, the elderly) leads to a vagal reaction producing syncope. This situation may progress to bradycardia or even cardiac arrest.

Hyperventilation is a more common emergency than is often thought. When hyperventilation persists, it can become extremely distressing to the patient. Anxiety is the principal precipitating factor.

A calm and sympathetic approach from the practitioner is important. The diagnosis, particularly in the early stages, is not always as obvious as it may seem:

Hyperventilation leads to carbon dioxide being ‘washed out’ of the body producing an alkalosis. If hyperventilation persists, carpal (hand) and pedal (foot) spasm (tetany) may be seen (Figure 12.1). Re-breathing exhaled air increases inspired carbon dioxide levels and helps to return the situation to normal.

Figure 12.1 A demonstration of carpal spasm. 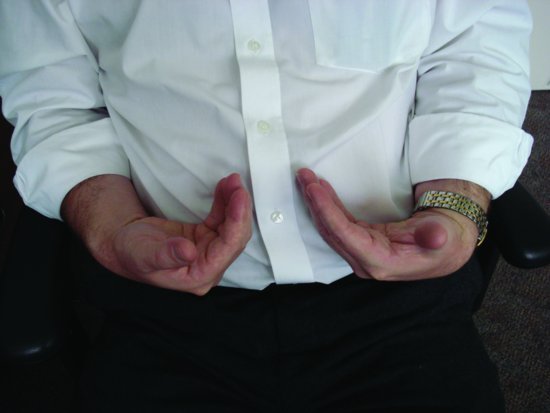 Asthma is a potentially life-threatening condition and should always be taken seriously. An attack may be precipitated by exertion, anxiety, infection or exposure to an allergen. It is important in the history to get some idea of the severity of attacks. Clues include the precipitating factors, effectiveness of medication, hospital admissions due to asthma and the use of systemic steroids.

It is important that asthmatic patients bring their usual inhaler(s) with them – if the inhaler has not been brought it must be in the emergency kit or treatment should be deferred. If the asthma is in a particularly severe phase, elective treatment may be best postponed. Drugs that may be prescribed by dental practitioners, particularly non-steroidal anti-inflammatory drugs, may worsen asthma and, therefore, are best avoided.

Signs and symptoms of life-threatening asthma

All patients, including those who have chronic obstructive pulmonary disease, should be given high-flow oxygen as even if these patients are dependent on ‘hypoxic drive’ to stimulate their respiration, they will come to no harm in the short-term.

Most patients who suffer chest pain from a cardiac cause in the dental surgery are likely to have a previous history of cardiac disease. The history is clearly important and if a patient uses medication to control known angina they should have brought this with them or it should be readily to hand in the emergency kit. Similarly, it is important that the patient has taken their normal medication on the day of their appointment.

Classically, the pain of angina is described as a crushing or band-like tightness of the chest, which may radiate to the left arm or mandible. There are many variations, however. The pain of myocardial infarction (MI) will often be similar to that of angina but more severe and, unlike angina, will not be relieved by GTN. In cases of angina, the patient should use their glyceryl trinitrate (GTN) spray, which will usually remove the symptoms. Dental treatment may be best left until another day if there is an attack, according to the practitioner’s discretion. More severe chest pain always warrants postponement of treatment and an ambulance should be called.

Features that make chest pain unlikely to be cardiac in origin are: pains that last less than 30 seconds, however severe; stabbing pains; well-localised left submammary pain and pains that continually vary in location. Chest pain that improves on stopping exertion is more likely to be cardiac in origin than one that is not related. Pleuritic pain is sharp in character, well localised and worse on inspiration.

Oesophagitis can produce a retrosternal pain that worsens on bending or lying down. A complicating factor in differentiation from cardiac chest pain is that GTN, due to action on the muscle of the oesophagus, may ease the pain.

Musculoskeletal pain is generally accompanied by tenderness to palpation in the affected region. As mentioned earlier, hyperventilation may produce chest pain. A list of possible causes of chest pain is given in Box 12.2.

It is clearly important to exclude angina and MI in the patient complaining of chest pain. If in doubt, treat as cardiac pain until proven otherwise.

Not all patients fit this picture and may exhibit only some of the signs and symptoms mentioned in the preceeding text.

The history will usually reveal the fact that a patient has epilepsy. A history should obtain information with regard to the nature of any seizures, their frequency and degree of control. The type and efficacy of medication should be determined. Signs and symptoms vary considerably.

In patients with a marked bradycardia (less than 40 beats per minute), the blood pressure may drop to such an extent that it causes transient cerebral hypoxia leading to a brief fit. This is not a true fit and represents a vasovagal episode.

Epilepsy – treatment of a fit

The decision to give medication should be made if seizures are prolonged (with active convulsions for 5 minutes or more (status epilepticus) or seizures occurring in quick succession). If possible, high-flow oxygen should be administered. The possibility of the patient’s airway becoming occluded should be constantly remembered, and therefore, the airway must be protected:

Figure 12.2 Buccal/intra-nasal midazolam. The solution in the bottle is drawn up in the syringe provided, which is calibrated into 0.1 mL increments. 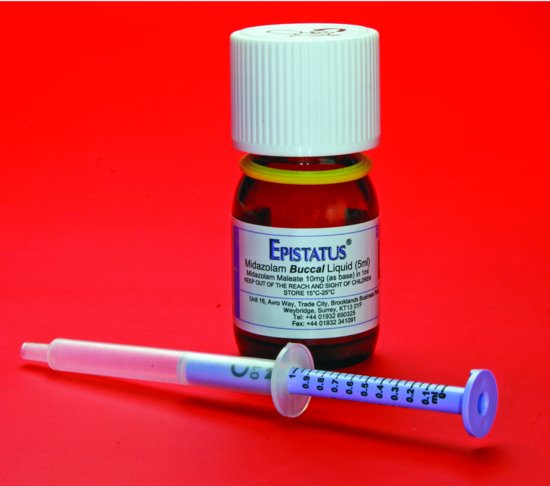